They are called "drawn glasses" because they seem to have been drawn from a single piece of glass, both bowl and stem having been formed by drawing out with a single spiral movement. They come in many sizes, and on tall or short stems, and are nearly as early as the " waisted " ones, some fine examples of which are shown in the next Figure (119). 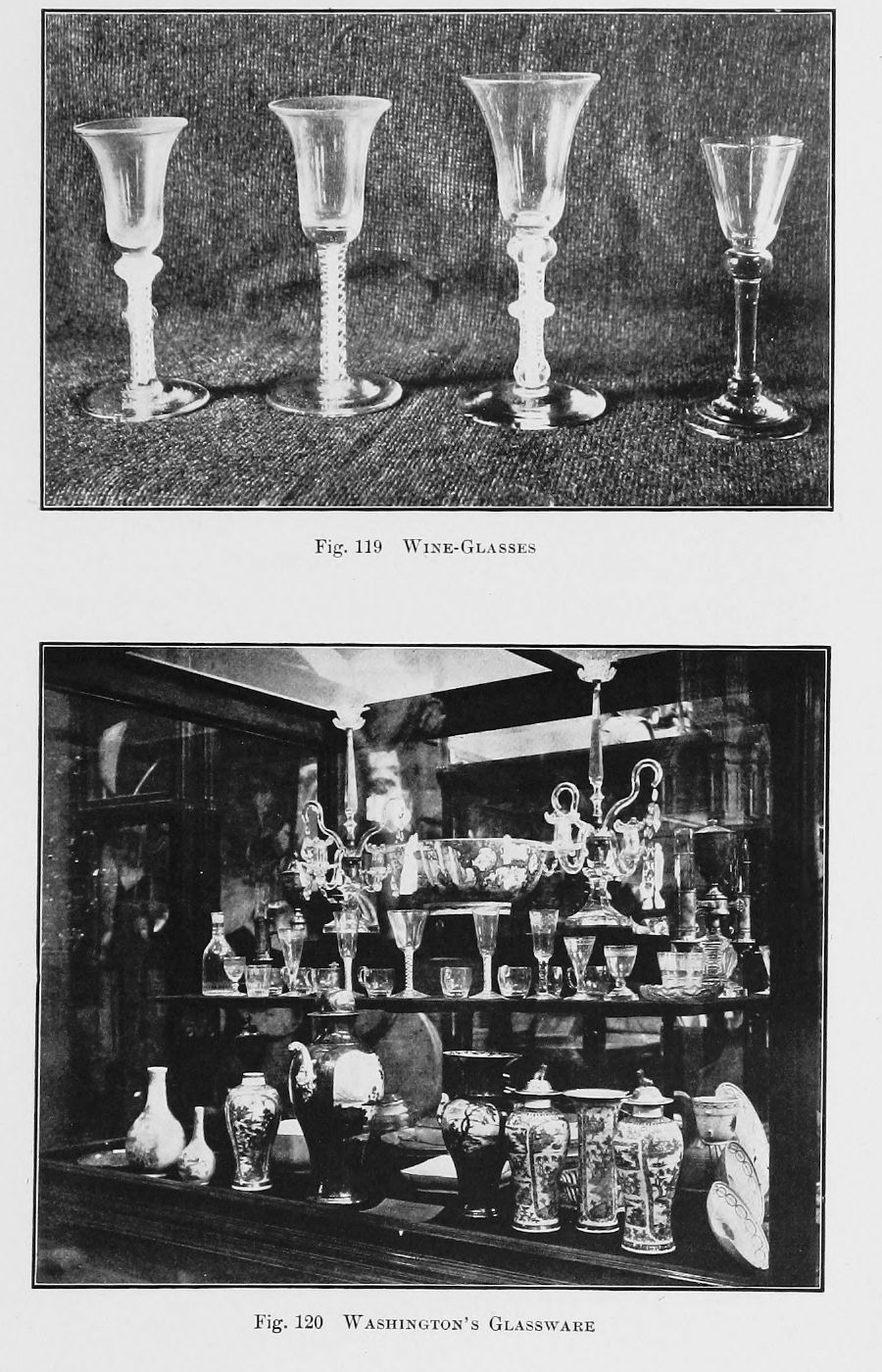 The drawn-bowl glasses never are knopped in the centre, like the first and third glasses in Figure 119, but they are frequently decorated with a twisted ribbon of white glass, or a twisted tear of air, while those for tavern use frequently had a bead of air introduced at the top of the stem. These choice varieties of glass were made for wealthy patrons, aa'Iio used them to drink wine from. Even in America many were in use, and in the Figure 120 can be noted many examples which did duty at Mount Vernon, when President and Madam Washington had guests to dinner. In fact all the elegant articles shown in this picture belonged to them, and it is well to note the fine glass candelabra on the top shelf, which must have been very orna mental when lighted up with candles.

The very choicest of all the glasses were engraved, most often with floral forms, sometimes with weaths of grapes and leaves. A point to be noted in the toav of glasses in Figure 118 is the extreme solidity of the stems and bases, which are very different from the slender stems of the modern wine-glasses. These old glasses were made so that they could not upset easily, ¦— avery necessary qualification in days when tem perance was far less considered than it is at the present time, and when squire, and parson too, were frequently taken from under the table, so potent had been the contents of these seemly glasses. I should call all these glasses spirit glasses, since the beer and wine-glasses all held more copious draughts. Some of the liquors and cordials which were drunk from these small glasses were imported. Among such were Clove or Caraway Waters, Oil of Venus, Oil of Hazelnuts, Parfait Amour, Essence of Tea or Coffee, Free Masons' Cordial, and many others.

Patriots aaIio chose only home-brewed "cordial waters " might, in 1766, go to Richard Deane, aaIio, at his distillery on Long Island, could supply them with Aniseed, Orange, and Clove Waters, All Fours, or the Cordial of Cordials, Golden Cordial, Cordial of Health, Royal Water, Royal Usquebaugh, Red Ratifie, Cinnamon, Cardamun, and Angelica Waters, Ros Solis, Stoughton's Elixir, Whiskey, Brandy, Rectified Spirits of Wine, as well as Aqua Mirabilis or Wonderful Water, and Aqua Coelestis, or Heavenly Water! It must have been after the perusal of this list that Benjamin Franklin wrote his "Drinker's Dictionary," consisting of many strange and curious words which signify intoxication. But though he deprecated get ting "tann'd, jagg'd, glaz'd, or crack'd," he wrote the following pretty recipe for punch:

Boy, bring a bowl of china here, Fill it with water cool and clear Decanter with Jamaica ripe, And spoon of silver, clean and bright, Sugar twice-fin'd in pieces cut, Knife, sieve and glass in order put, Bring forth the fragrant fruit, and then We 're happy till the clock strikes ten. 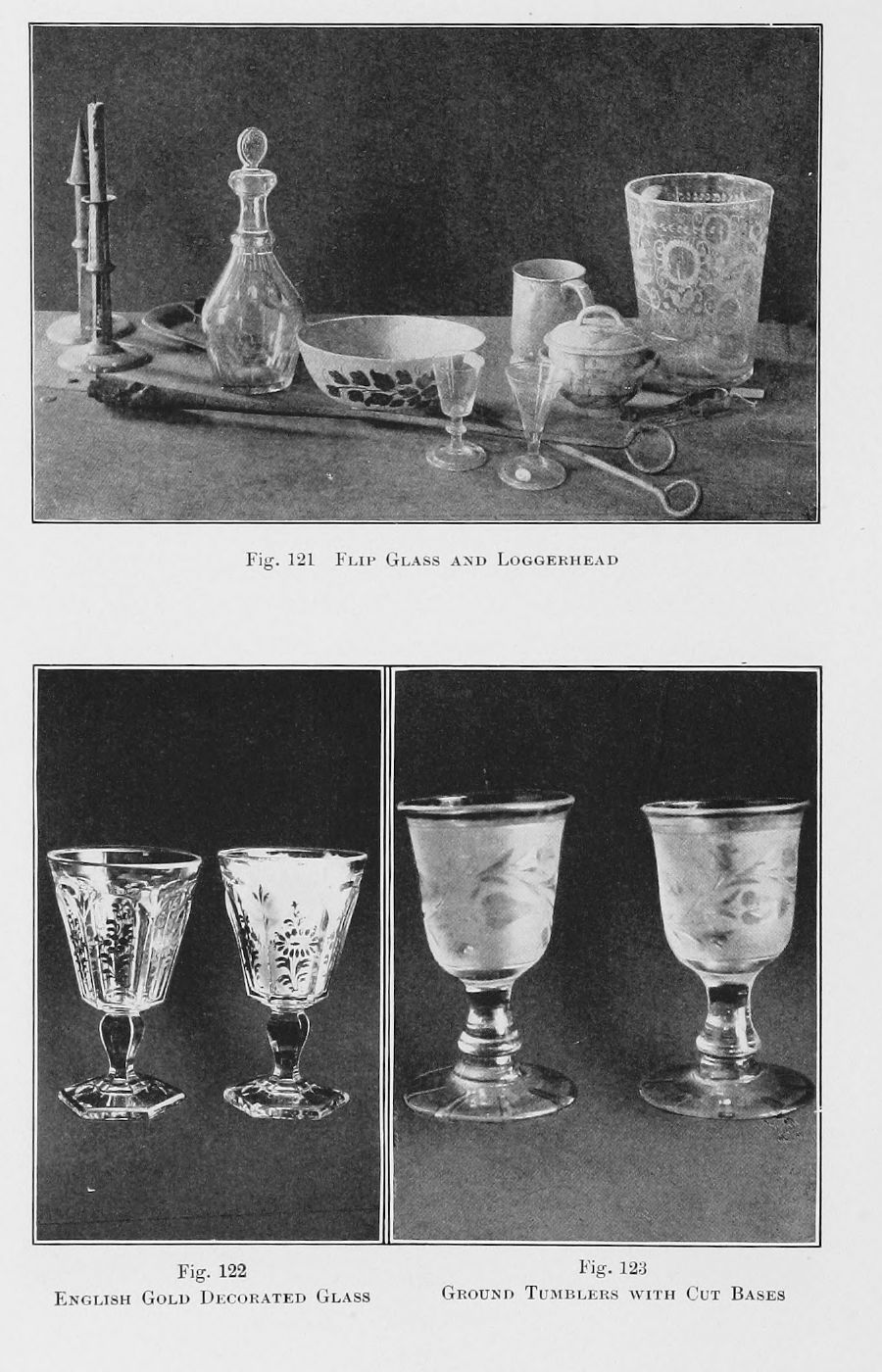 For the drinking of punch in England, and the more popular flip in this country, came a glass of generous size, which was capable of holding nearly a quart. Cider mugs were often made of pottery, though no doubt it was often partaken of from flip glasses, par ticularly if it was " royal mulled " or " damasked." Molasses, spruce, and persimmon beer were some of the temperance drinks of the day, while tiff, Sampson, and botch potch are but a few of the mixed condi ments. Israel Acrelius, in his " History of New Sweden," 1758, mentions half a hundred beverages now no longer recognised by name or taste.

A large flip glass is shown in Figure 121. beautifully engraved, and beside it on the table lie the other necessaries for a " eonviYial as our great grandfathers would have said. The iron implement lying in front of the bowl is a loggerhead, which was heated red-hot and then plunged into the flip, causing it to mantle high, and imparting to it the burnt taste which was so much esteemed. The way our ancestors lived, the things they ate, Iioav they were clothed, what they read, and Iioav they amused themselves, are sub jects of unfailing interest. But when we come to what they drank, we stand aghast! It was no doubt the fact that they had to work unceasingly and largely out of doors which was their salvation.

There was much glass of a finer quality which found its way over here, like the two tall goblets shown in Figure 122. They are of English glass, not decorated with engraving, but with a pretty floral pattern in gold, and also with gold rims. One of these glasses is filled with cotton to show the pattern. These goblets are about a hundred years old, and are from a set of five, which are still in good condition, out of the original dozen. The gold is not impressed in the glass as in the modern gold-decorated glass, but is on the surface, and much more likely to wear off. The two goblets shown in Figure 123 are also quite unusual, and of about equal age. They are made of ground glass, after the fashion of the lamp-shade in Figure On the base are cut very deeply several rays, and the glasses are enormously heavy, so that they are inconvenient to use when filled with water. These are also of English origin.

Three glasses, very beautiful in both execution and design, are given in Figure 124, the one on the left being particularly noticeable, since on one side it has the American eagle and shield, and on the other a coat- of-arms with the three princes' feathers. It seems incredible that glasses of such beauty as these, and those for wine which have been given, should have been wantonly destroyed; yet Madame de Sevigne wites in 1675 that it was customary after drinking the King's health to break the glass, and "roystering blades," both in this country and Europe, during the last ten years of the eighteenth century, had a fashion of biting out a piece of the wine-glass and grinding it with the teeth, and swallowing the pleasure to the company being to see how newcomer stood it. Mortimer, the artist, did it, so Southey says, and never recovered from it. 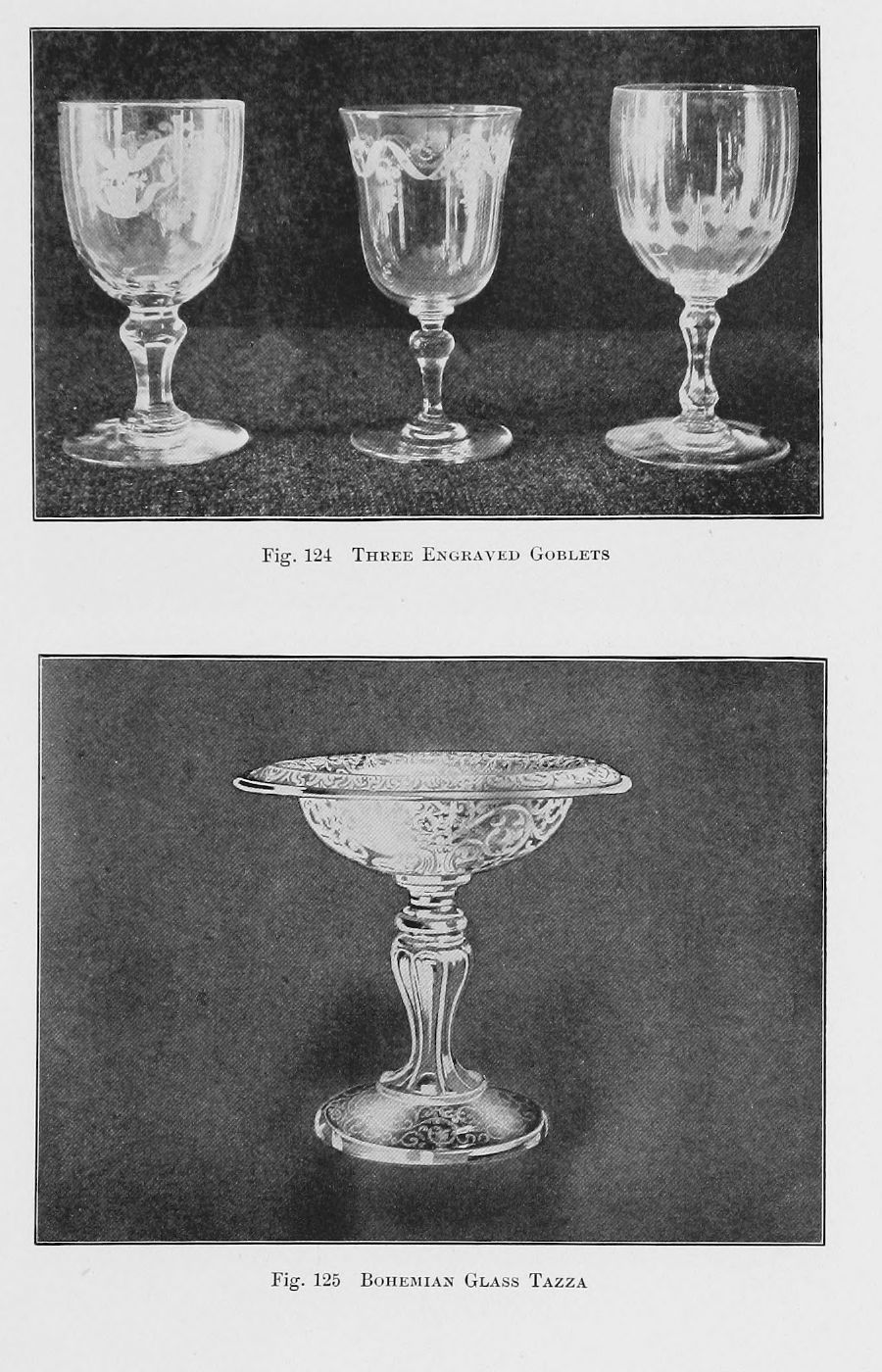 Wedgwood, the great potter, set the fashion of making shallow bowls or cups, mounted on stems, which he called " tazzi." Sometimes these had handles. Tazzi were also made in glass, and Figure 125 is one in Bohemian glass, very prettily decorated with a raised all-Over pattern and lines of gilt.

That the glass from Italy, Bohemia, and England was to be found in America very early in our his tory is shown by both inventories and advertisements. Colonel William Smith, of St. George's Manor, Suffolk County, in 1795, was worth £2,589 4 s. He died a few years later, and in his inventory is mentioned, 1 case Venice glasses, £3. Flint glasses, £3.14. Captain Giles Shelly, New York, 1718, had an enormous amount of household gear, and as many as 45 beer glasses."