Governor Montgomery, at Fort George, New York, had among other fine things a complete set of cut- glass cruets, as well as water and champagne glasses. In the " Boston News Letter " for August 24, 1719, there were advertised:

"Fine glass Lamps and Lanthorns well gilt and painted both convex and plain. Both suitable for Halls, Staircases, or other Passageways, at the Glass Shop in Queen's Street."

Thomas Lepper, in 1754, had on sale all sorts of bottles, from one quart to three gallons, and upward, as well as a variety of other There were "cream-jugs, syllabub, and sweetmeat glasses, cruet stands, flowered wine and water glasses, glass salvers, small enamelled, shank wine-glasses, flowered, scalloped, and plain decanters, jugs and mugs, salver and pyra mids, glasses for silver, salts and Sweatmeats, poles with spires and glasses, smelling bottles, sconces, tulip and flower glasses of the newest patterns, finger bowls and tumblers of all sorts," advertised for sale in New York before 176 ."

A most unusual article, at least in this country, is shown in Figure 126 standing on a beautiful Sheraton candlestand. This is a glass globe filled with water, which was used to concentrate the light of the candles, and throw it upon a particular spot.

A less choice arrangement of this order, glass bottles of very thin glass filled with water, was used in both England and Holland during the eighteenth century, and doubtless earlier, by the lacemakers to throw a shaft of light on their work. Sometimes a single candle on a stand was surrounded by bottles, and the workers drawi in a circle, on chairs and stools of varying heights, had only this to make the most delicate and eye-destroying of all fabrics.

In our country the first glass factory was started in 1607 near the ill-fated Jamestown, in Virginia, and, like the Egyptians of old, we made beads. We used them for barter with the Indians. It is said that oc casionally beads are found near Jamestown, striped green and white like gooseberries, and it is thought they may have been made here.

After the various settlements were a little more secure, the necessity for glass bottles stimulated the colonists to pay bounties to men of this calling who would come and settle here. Salem, Massachusetts, a most progressive town in its early days, had a brick kiln in operation in 1629, and a glass-house in 1639. Win- dow glass was brought over here easily as ballast, but round or IioIIoav glass was more perishable; and to en courage home production, many enactments were passed in Massachusetts, Virginia, Pennsylvania, and New- York. None of these early ventures were particularly successful, but by the eighteenth century many bottle factories were started, most of which have passed out of the hands of the original owners.

The factory at Glassboro, New Jersey, was started in 1775, and the one at Kensington, Pennsylvania, a few years earlier. These two establishments are still in operation to-day, and are the oldest ones in America which still exist. The first glass bottles were coarse and of a dark green glass, although blue and brown colouring was produced by using oxide of cobalt and manganese. The making of even the roughest bottle takes more skilled labour than one would think at first glance, and when it comes to a fine object, graceful in shape and elegantly ornamented, the work becomes an art.

About 1810, and until the last quarter of the century, glass bottles were made here in various shapes and with different devices. Among the earliest were those bear ing portraits of Washington and Lafayette, those with eagle and shield, and some with a car drawn by a horse, and also one showing an early locomotive; but, of course, these were later still. About 1840 were made the log-cabin devices, of which there were several on bottles, in pitchers, like the one I show in Figure 127, and in small square panels, which were mounted for breastpins, one at least of these being treasured in California, since a dravraig of it was sent to me only the other day. The log cabin was so favourite a device that it was seized upon for use as a whiskey bottle, and is marked on the back, " G. Booz's Old Cabinet Whiskey." Still later than this the same shape was used for " Holtzermann's Stomach Bitters." This was a patent medicine, and such a bottle is shown in another figure.

A fine group of old glassware is given in Figure 128, the most attractiVe pieces being the toav of cup plates with historic scenes and portraits, which form the front 1-oav. Beginning at the right, the first cup plate shows the log cabin, the design being very plain, even in so small a space. This design was made about 1840, and it is not yet known whether these pieces were made in this country or, like the historic china, in England. Next comes "Henry Clay," date 1844; then the " Benjamin Franklin Steamboat"; then "Fort Meigs"; next " Eagle and Shield," followed by one of the rarest, showing the Bunker Hill Monument and hav ing these inscriptions: "Bunker Hill Battle, Fought Brave." June 17, 1775." "From the Fair to the "Corner Stone laid by Lafayette, June 17, 1825, Finished by the Ladies, 1841." 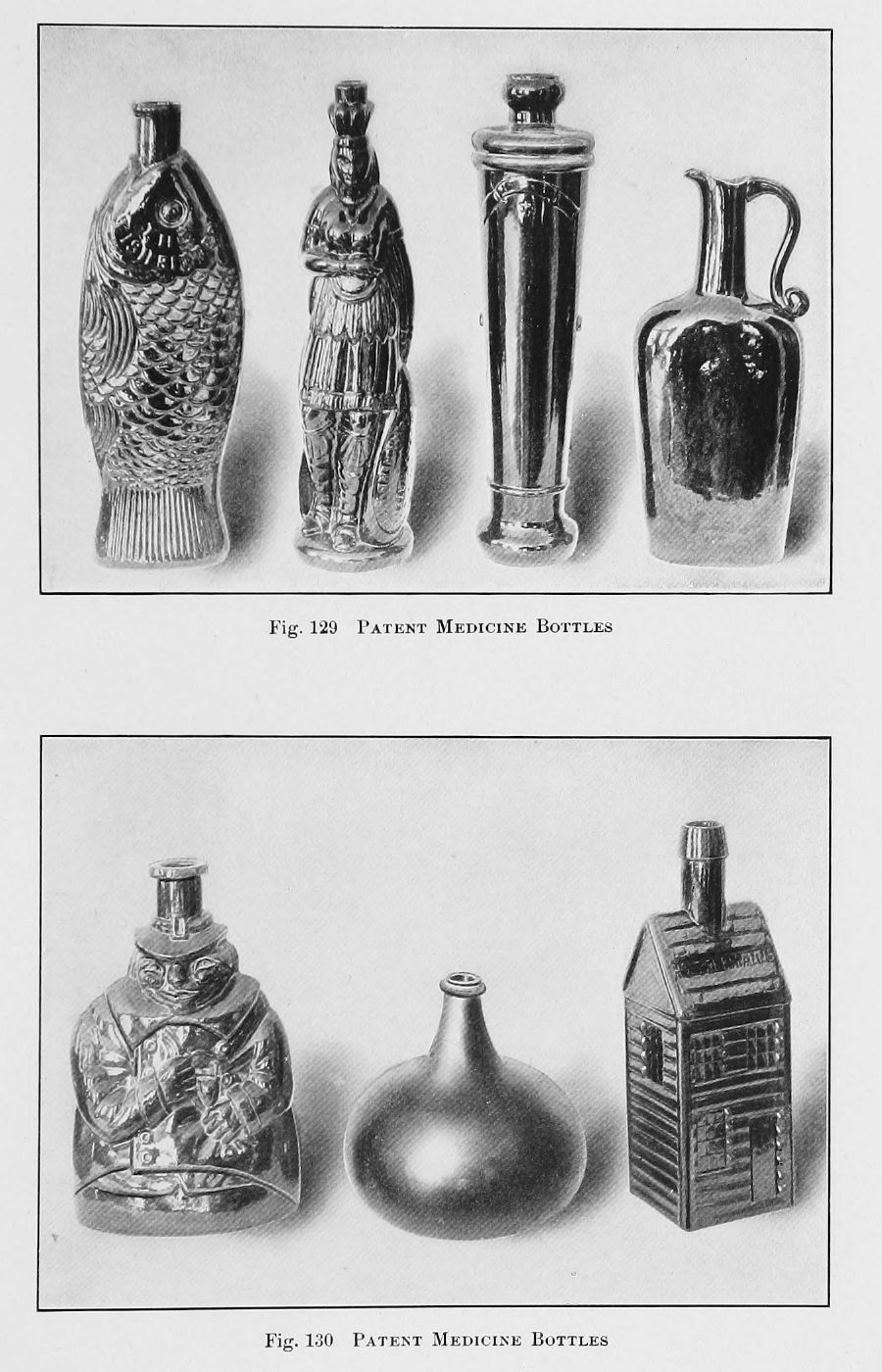 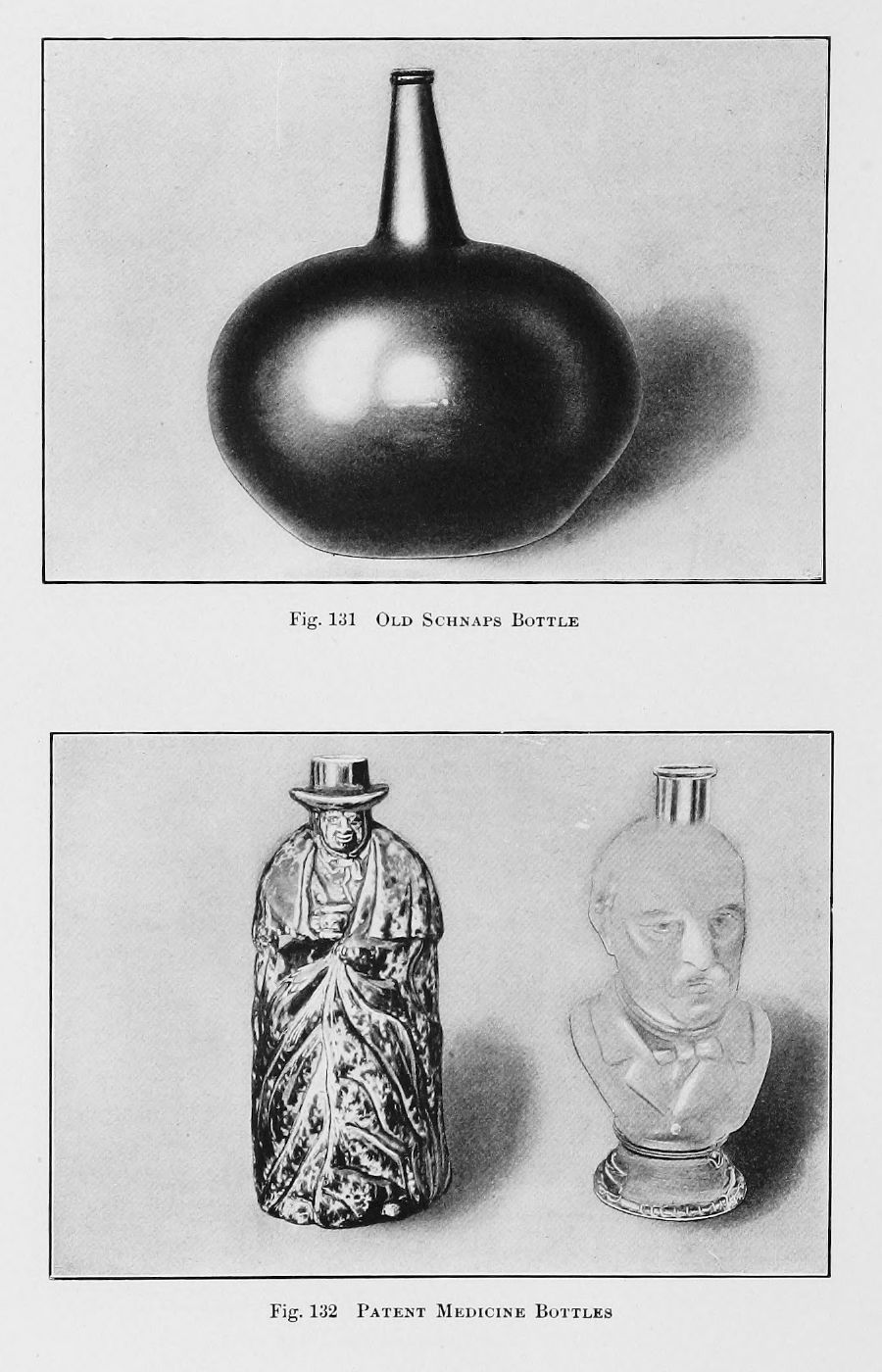 The last plate on the row is another portrait of Henry Clay, and there is also a portrait of President Harrison, although it is not given here.

That there are many of these cup plates tucked away out of sight I am quite sure. I am also sure that they will be rummaged out directly, and that my corre spondents will want to know their value. Of course, they do not begin to be so valuable as the old blue china cup plates, which bring exorbitant sums, but one with a portrait or scene on it, in good condition, is worth one dollar. I have known of seven being bought for twenty-five cents for the lot.

The era of patent medicines set in about 1850, and distinctive forms for bottles were eagerly sought. There was no limit to the ingenuity displayed in the choice of shapes, and a collection of these bottles is cer tainly quite ornamental, if not particularly interesting.

In Figure 129 the fish is marked under the eye, Dr. Fish Bitters. W. H. Ware. Patented 1866." The Indian in rich brown glass is marked on the side, "Brown's Celebrated Indian Herb Bitters. Patented 1867." The cannon does not tell what it contained, but is merely labelled, " A. M. Bininger and Co., 19 Broad street, New York." The graceful jug is nothing but a whiskey bottle, and is marked, " Wharton's Whiskey. 185 . Chestnut Grove." This probably came from the City of Brotherly LoA*e.

"Van Dunck's Geneva, Trade-Mark," is found on the bottom of the toby in Figure 130, and the nice old squatty bottle of rich green glass betrays its Dutch origin, since it is a Schnapps bottle, but is probably not so old as the one shown in the next Figure (131), whieli has an earlier type of neck. The man's figure in mottled ware (Figure 132) is marked " Monk, 1849." This bottle is not glass, but one of those rare specimens of Bennington ware, which came from the Vermont pottery which was started in 1847, and whose brief career lasted about ten years. Beside it is the most modern piece of all, which was brought out in the Cleveland campaign.