In the next Figure (140) will be found a Hepple white pattern, all gilt, and supported upon two Bat- tersea enamel knobs. It is in fine condition, and forms a beautiful adjunct to any room, though par ticularly appropriate in a fine old house, where it has hung many years. It might be well to say a word of warning to enthusiasts who, regardless of their surroundings, are devoted to antiques.

A certain propriety which is often neglected, should be observed with reference to the placing of such things. Of course, if your old mahogany and china are heirlooms, there is nothing to say. Put them where you please and enjoy them. But if you live in a modern frame house, with Ioav ceilings and modern arrangements, you need to be very careful how you install antiques which were made for other conditions. Also be care ful Iioav you mix ancient and modern objects together; the result is sometimes mirth-provoking, and one is obliged to face the owner with a solemn face, when one would like very much to laugh at the incongruities which are grouped there, and which their eager pos sessor expects you to praise with unction.

The three-light mantel mirror we are all familiar with, and with the small bedroom mirror with its paint ing on glass at the top. Somewhat on this fashion, but yet what we might well call " Empire," is the mahogany one given in Figure 141. It has choicely carved side-pillars, and a water-gilt mount at the top. It is is called a two-light mirror, and dates from what about 1800. Still later is the cheval glass (Figure 142), which is of veneered mahogany, with turned posts and top rail. The glass was considered a generous size when it was made, and measures two feet by three. Glasses like this in standards which varied but a little could be obtained till what was known as "the black walnut age" set in, during the fifties. They did not have much to commend them, and look as clumsy now as do their cousins, the great sofas with similar legs and heavy veneered arms. Many people think that because a thing is old it needs no further recommenda tion, and never look for grace of line, beauty of con struction, or choiceness of material. 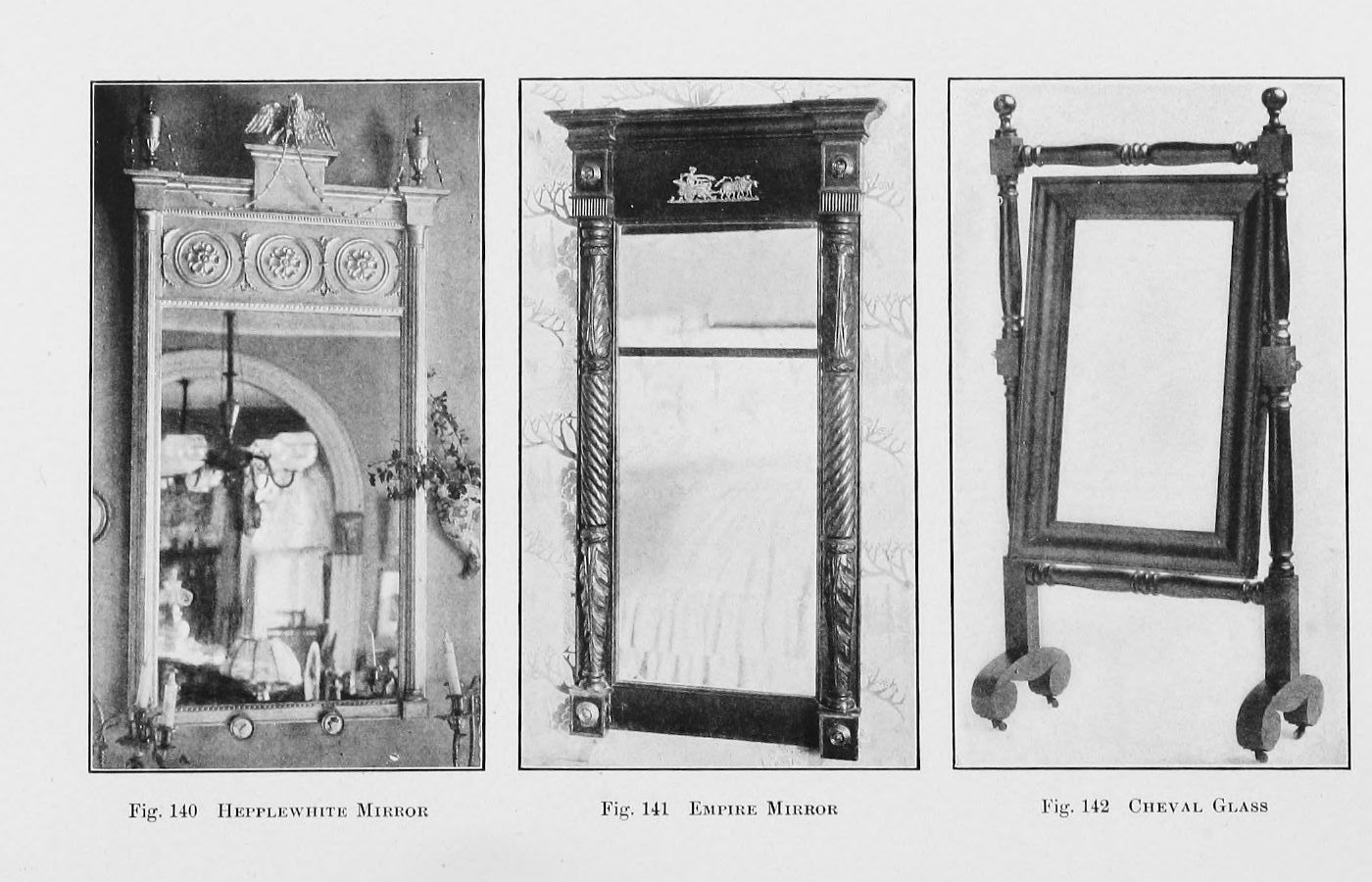 Iam frequently asked if there is any way of de tecting the counterfeit hollow glasses with which the markets are so heavily stocked. There is no infal lible way, but before purchasing a glass it is advisable to flick it sharply with the finger. If it is an old one, it will respond with a sharp, metallic ring, which is entirely absent from the modern reproductions. The bases of the glasses are much larger in the old than in the spurious ones, and the modern glass is always brightened or " buffed " by machinery, which can be easily detected. In the middle of the base there is a rough, sharp place, as if the extra glass had been broken off, which is another mark of the antique pieces which is wanting in the modern, and frequently the foot is "folded," — that is, has an extra piece added in the form of rim, which gave it extra strength and firmness. Glasses with this folded foot are extremely rare and consequently desirable. It is seldom found on specimens later than the seventeenth century.

In reference to the old German beer-glasses, the plain ones are the most common. They should have the appearance of having been blown from one piece of glass. Rummers,"

The grog-glasses, or " as they are some times called, are always of ample proportions, and many of the old ones have a peculiarity which would easily escape notice. This is that the upper half of the glass is thicker than the lower half, magnifying the amount of liquor put in it,and at the same time reducing its quantity.

Many of the nice old glasses dating from the last of the eighteenth century are decorated with grapes and vine leaves. Others are fluted, and some have a lattice work, all of which ornamentation is engraved. In these it will be noted that the foot is much flatter than the earlier ones, and not quite so large. The collector of glasses has an exciting career before him, for there is great difficulty in deciding on what genuine and what not. is is The most rare and desirable glasses are the old square-based goblets, sometimes engraved with the Owner's name, and sometimes with stars or other devices.