Brass is an alloy of copper and zinc. "English brass," as it is called, contains about seventy per cent. copper and thirty per cent. zinc. While brass is of comparatively modern origin, copper, on the other hand, has been in use from the most remote times, and when alloyed with tin in the form of bronze, was the first metallic compound used by mankind. Indeed, so general was its use at one distant period, when arms, implements, and ornaments were made of it,that we call that time the " Bronze Age."

In museums and historical collections the world Over are found metal objects belonging to this time, and wonderfully beautiful many of them are.

It was the Romans who spread the art of working these metals over Europe, and the first traces of yellow brass which we find in England is in the form of monumental brasses, which took the place over tombs of carved effigies and figures made of stone. These brasses are made of sheets of the metal and set into the pavement. Although they began to be used as early as 1230, the most famous one I know of is in the church at Stratford-on-Awon, where it was placed in 1616 over the grave of William Shakespeare.

"Good frend for jesus'sake forbeare to digg the dust encloased heare; Bleste be ye man yt spares tiles stones and curst be he yt moves my bones." Shakespeare himself says in the " Taming of the Shrew," when Gremio is describing all his wealth:

"First, as you know, my house within the city Is richly furnished with plate and gold; Basins and ewers to lave her dainty hands; My hangings all of Tyrian tapestry; In ivory coffers have I stuff d my crowns; In cypress chests my arras counterpoints, Costly apparel, tents and canopies, Fine linen, Turkey cushions boss'd with pearl, Valance of Venice gold in needlework, Pewter and brass and all things that belong To house or housekeeping." Truly the young man seems to have been well fitted out.

The most important domestic uses to which brass was put was in utensils, if I may so use the word, for heat ing and lighting.

In the most interesting history of "Isabeau de Baviere," by Vallet de Viriville, he gives extracts from the records of her household expenses which are still preserved in the French Archives. This Queen was the wife of Charles VI, called "the Well-Beloved," and she lived from 1371 to 1435. She had more idea of comfort than many of her predecessors, and in her rooms were chairs covered with red Cordova leather, and baths of oak. She used " suspended carriages" and had one chariot on purpose for thunderstorms, "pour le tonnere" but just how it was arranged the records do not state. Queen Isabeau had also to warm her rooms caloriferes, like little iron chariots filled with red-hot ashes which could be wheeled about, and also hollow balls of gold and silver full of hot cinders to hold in the hand, which comforts were hitherto unknown.

From this time on, articles for holding hot coals have been in use for heating, and still are largely employed in Spain and Japan and China, where the metals used are brass and bronze.

The usual name given to these inadequate heaters is brasier. One form is shown in Figure 167. 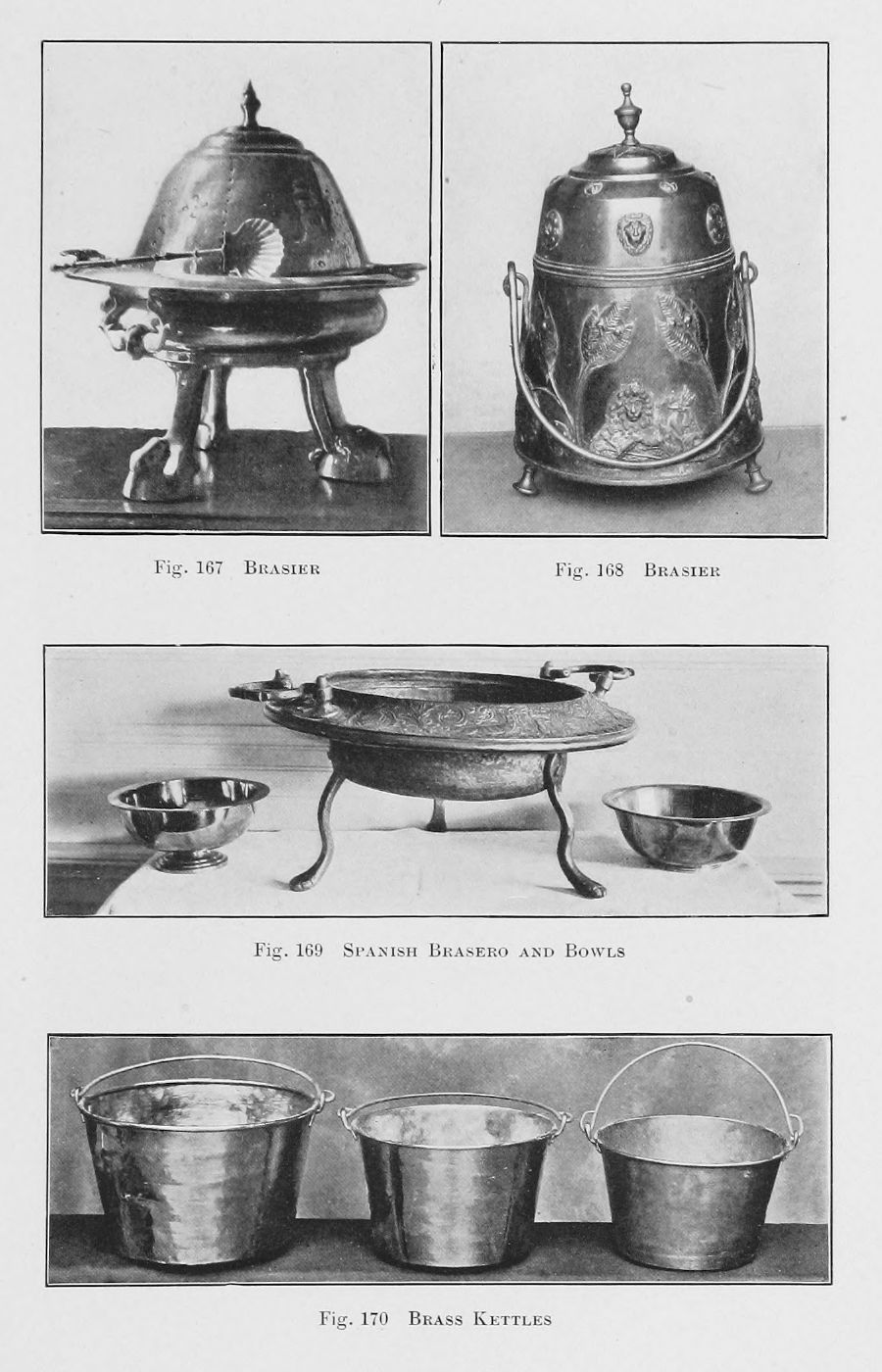 Another kind is given in Figure 168, and these were carried about from room to room. There are peculiari ties about this heater which make it unusual. It is of English manufacture: the bottom part is of copper with figures of brass, and the top is of brass with figures of copper. It stands on brass feet and has a brass handle. Although the lower part is not in one piece, it is entirely hand made, and the bottom of it is curiously bent up on the sides. That this was not an or dinary article is plainly to be seen by its decoration, and, though it has found its way over here, I am sure it served its turn in some old manor or castle, which, though high-sounding places of residence, were none too comfortable.

Still another brasier is shown in Figure 169. This is made of brass, very solid a'nd heavy, as may be seen, with two handles to carry it about conveniently. It is of Spanish workmanship, but the shape was approximately the same in all countries.

The old English records of about Queen Elizabeth's time show how highly considered all metal objects were, and display some curious facts as well. John Fuller, of Rednall, Norfolk, England, had his will probated in 1598. He giA^es to his wife Ann " all the household stuff she brought me, such as brasse, pewter, fowles, etc., at her death to go to Thomas Fuller the This was only one of several cases where I have found that there were two children in one family given the same name. The confusion in the Fuller family must have been something dreadful, since there was "oulde William," " elder," William and young Thomas the and " Thomas the The father says in his will, " to young William my sonne, the lesser brass bason and the platter on the cupboard," and to "the children of oulde William my sonne, the cupboard and the long table in the hall. To Thomas the elder a milch cow and to daughter Batriss a great bason and a pewter dish."

Amid the belongings of those who first sought the shores of this country when the Mayflower took her troublous way hither from Delfshaven, there were copper kettles, no doubt, carefully packed within the iron pot, which was the most necessary article of household gear which they brought with them.

The records seem to point that they were better off for such utensils than one poor village in County Craven, England, in Cromwellian times. The story goes that the village had been so completely gutted by the soldiers of the Commonwealth that not a single kettle remained, and that an old helmet travelled from house to house and was used to boil the broth and pottage in. But to return to our own early settlements.

I find in the inventory of the Widow Coytemore, dated 1647, when she married Governor Winthrop, "one copp. furnace." This was, I am inclined to believe, a small, box-like affair on legs, into which live coals were put to keep the kettle warm on the hearth. There is such a one at the Antiquarian Rooms at Concord, Massachusetts.

John Stevens, of Guilford, Connecticut, died in 1670, but he was one of the old settlers of the place, since the town records state that in 1645 he was fined for neglecting to do his share of the fencing. To his son, Thomas, he bequeaths " the mare I usually ride on and my biggest brass kettle, my best sute and my cloak and my bed and one payre of sheets and all my other bedding." Such a kettle as the one he mentions is shown in Figure 170. These great kettles bear on their sides not only the scars of time but the marks of the mallet as well. Brass utensils have been made in this country for a century or more, but the first one is not a matter of record, as is the first iron pot, the story of which, though not quite within the proAdnce of this article, I shall tell here.

In 1630 Thomas Hudson came to this country and settled in Lynn, Massachusetts. He took up land on the Saugus River, near the ford, and found in the nearby marsh bog-iron ore. This find led to the estab lishment of the first iron works in this country, and in 1642 the first casting, an iron pot, was made. This pot remained in the possession of the descendants of Thomas Hudson till 1892, and in that year it was presented to the city of Lynn, where it may now be seen.

Another iron works was set up at Braintree, Massachusetts,"in 1646, and here " pots, mortars, stoves and skillets were made, but the works did not continue long in operation, as the good people of Braintree were afraid that the necessity for charcoal would consume too much wood, and so did not allow the works to remain operative long. Besides they had religious differences with Dr. Child, the owner, and made it very unhappy for him.

"Open kettles," as they were called to distinguish them from tea-kettles, were made here at an early date, and were hammered out of sheet brass and copper which was brought here chiefly from Wales. We know that Captain Myles Standish had three brass kettles, four iron pots, a skillet, and a warming-pan. It is also set down in Colonial records by Governor Bradford that the second contingent that arrived at Plymouth, in Perhaps Captain Standish loaned them some of his seven.