Wood, in his "New England Prospects" says: "Out of the Pines is gotten Candlewood that is so much spoke of which may serve as a shift among poore folks, but I cannot commend it for Singular good because it is something sluttish dropping a kind of pitchy substance where it stands."

"Our pine-trees that are the most plentiful of all wood, doth allow us plenty of candles which are very useful in a house. And they are such candles as the Indians commonly use, havingpine- no other, and they are nothing else but the wood of the tree cloven in two little slices, something thin, which is so full of the moisture of turpentine and pitch that they burn as clear as a torch."

We do not seem to have made much use in this country of the light of "antiquity" as the rush-light may well be called, and I have never come across a rush light holder, nor seen one exposed for sale in this country. Rush-lights were easy to make, and in Walter Harris's"translation of " Ware's Antiquities of Ireland there is the f ollowing:

"They made use of lights made of the pith of rushes, which they stripped bare of the skin, and left only a small ridge at the back to keep the tender pith from falling asunder. When these were thoroughly dried they dipped them slightly in grease or other unctuous matter, and then had no further trouble in the preparation. This sort of light is to this day made use of among the meaner sort of Irish, and people of condition (before the use of the tallow candle which was introduced into Ireland from England) twisted a great number of these rush lights together, sometimes to the bulk of a man's arm. Nay, we have instances in the Irish annals that even within these 200 years they made them the size of a man's middle."

Rush-lights were in use among the cottage folk of here, which was better than candlewood or rush-lights, and less precious than candles made of grease, even though the tallow came from deer suet or bear grease. One of the earliest and poorest styles of light-givers was called a betty lamp. It was little more than a metal tray with upturned edges, so that the grease would not drop out. The light was provided by a bit of twisted rag which burned in the pointed nose. It had to be constantly attended to in order to give the faintest light. Lamps similar in principle had been in use cen turies before the Christian era and were made of pottery, with a spout for a wick and a hole in the top into which the oil was poured. The form our ancestors used was something like the one in Figure 190, except this one could carry four wicks, one at each corner. The tall lamp at the right is also a crude form for a round wick and oil, and known as a " baker's lamp." 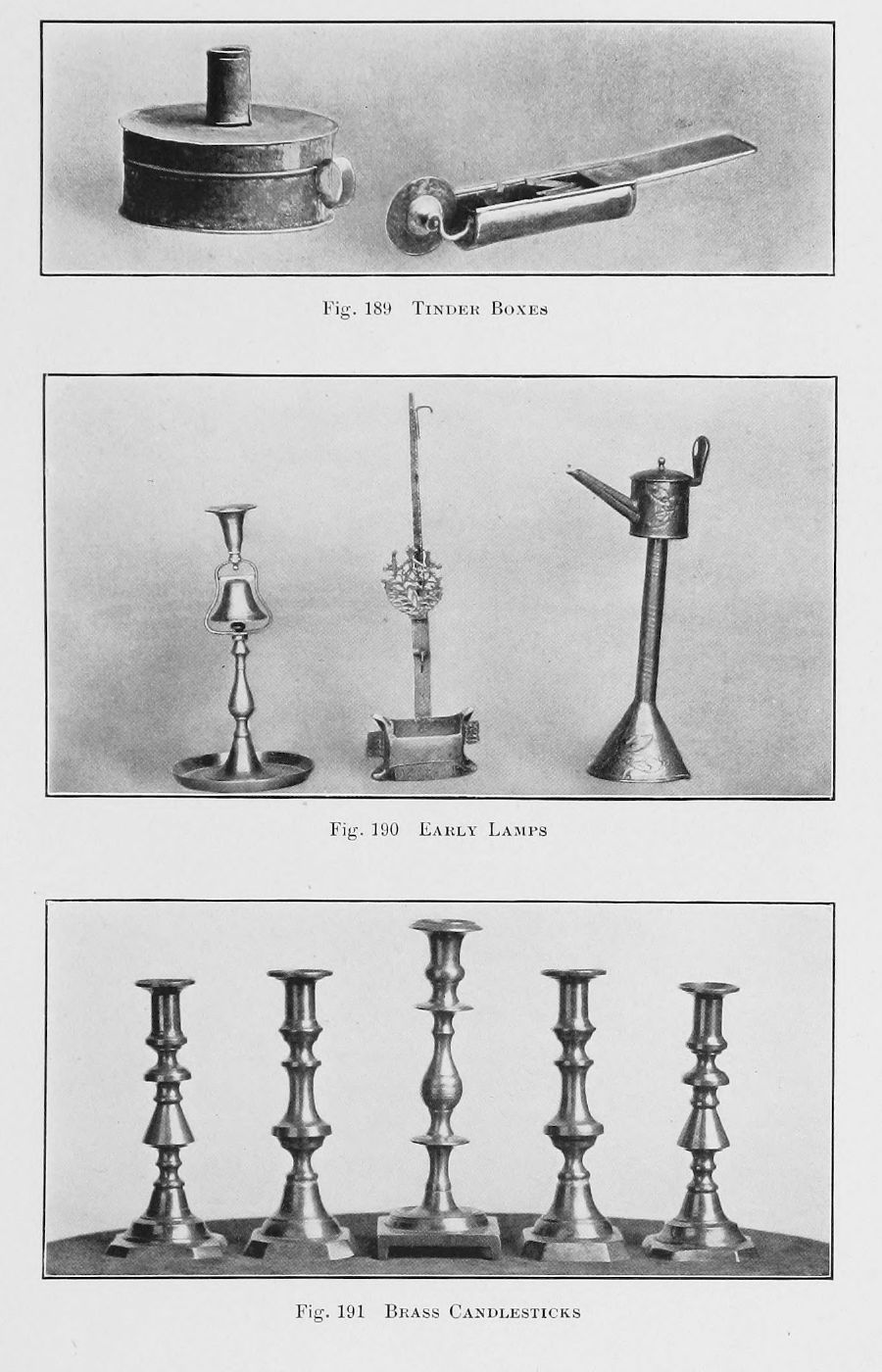 When the early colonists looked about for other material than grease to use for lighting purposes they found it near at hand in the sea, where there were abundant fish. Higginson, writing in 1630, says that though there is " no tallow to make candles of, yet by the abundance of fish thereof it (the colony) can afford oil for lamps." In another quaint old record, called Josselyn's " New England Rarities," which was written between 1663 and 1671, there is another reference to oil:

"It was not long since a Sperma Ceti Whale or two were cast upon the shore not far from Boston in the Massachusetts Bay, which being cut into small pieces and boyled in Cauldrons, yielded plenty of Oyl, the Oyl put up in hogsheads, and stow'd into cellars for some time, candies at the bottom, it may be one quarter; then the Oyl is drawn off", and the candied stuff put into convenient vessels is sold for Sperma Ceti, and is right Sperma Ceti."

In 1686 Governor Andros of New York asked for a commission for a voyage for " Sperma Coeti Whales," and in 1671 Nantucket, then known as Sherburne, began whaling operations, growing to be known as the greatest whaling town in the world. Oil for burning was soon in demand in all parts of the colonies. But candlesticks of brass, copper, pewter, and later of silver and Sheffield plate, were not crowded out by oil. They were considered more elegant than oil lamps and held the choicest wax candles which the housewife could make. If possible she used bayberry-wax, which was highly esteemed from New Orleans to Canada. Of so great importance was this vegetable wax that at Brookhaven the law forbade the gathering of the berries before September 15, under penalty of a fine of fif teen shillings. In Louisiana the bushes were planted on the borders of the bayous which formed the waterways and in some cases marked the boundaries of the plantations. In 1705 Robert Beverley described it as follows:

"A pale, brittle wax of a curious green color, which by refining becomes almost transparent. Of this they make candles which are never greasy to the touch, never melt with lying in the hottest weather; neither does the snuff of them ever offend the smell like a tallow candle, but instead of being disagreeable if an accident puts a candle out it yields a pleasant fragrancy to all that are in the room, insomuch that nice people often put them out on purpose to have the incense of the expiring snuff."

In Figure 191 a tow of stout candlesticks of good Colonial types is shown. A " sliding pattern much used among the thrifty, is given in Figure 192. As the candle burned away it could be moved up, so that there was no waste. There is also another early pattern of a stick with a grease tray, which caught the drippings as they fell from the burning candle. This was very necessary in the case of tallow dips, or any candles not made of wax. The big candlestick in the centre is a Russian church stick. Other candlesticks of Russian and often Jewish origin are shown in Figure 193, and all were used for religious purposes. The Jews were noted long ago for their proficiency in metal work. In Bible days at Tyre and Sidon they traded" in vessels of brass in thy [...]

The Chinese also worked in brass and other metals centuries ago, and embodied many of their strange artistic ideas in domestic articles. One of their temple sticks is also shown; it is the one with the two birds on it.

The two candlesticks with glass shades are of English make, one of Sheffield plate and one of ma hogany (see Figure 194). The smaller one was for bedroom use, and the shade prevented draughts from extinguishing the candle when it was carried about. These are reproduced to-day in brass as well as plated ware, and are quite as useful in country houses as they were in the days when they were the latest thing out. The tall mahogany candlestick is one of a pair which are in as fine condition as they were the day they were made. For many a long year they graced the mantel shelf of a fine old house, being one of the chief orna ments of the best room, and lighted only when company was expected. On such occasions conversation or cards were the amusements, and such sticks never left their dignified retreat on the shelf. On the card-tables, many of which were provided with round, flat places for the candlesticks to stand, would be found tall candlesticks like those seen in Figure 195.