[These] belonged to Gen. Washington and were Mounternon. This pair are silver, but there were few per sons also could afford that metal, and, provided the stick was tall enough, it did not matter of what material it was made. I find in old records and inventories many references to candlesticks, and it is easy to see that they were important objects of domestic economy. As early as 1489 I find mention of a bell candlestick, the word bell referring to the shape of the base, which was somewhat in the form of a bell and very solid and heavy. In the next century the candlestick was still of enough importance to be an object of bequest, and a Mr." Thatcher of Pirton, England, gave by will to my grandson one fallowe cowe and best bed and one greate Brasse Candlesticke." To his youngest grandson he gave " one fallowe heifer with bed and payer of sheets of the thirde sorte and one Brasse Candlesticke."

The process of making the candles to go in these sticks was long and trying, but casting them in moulds was easier than dipping them. The moulds were made either of tin or pewter and would hold from two to eight candles at a time. Not every family owned a set of moulds, but in those pleasant days of village life a mould was passed about from one family to another at need, just as they passed the spoon mould when new pewter spoons had to be run.

Anyone who has travelled abroad, particularly on the Continent, knows how important a part candles play among the charges on the bill even yet. Some thrifty souls take with them from place to place the candle ends for which they are charged, and are enabled to get up quite an illumination at the end of a week of travelling by lighting all the bits. I think that the penurious feeling which exists in the breast of nearly every Frenchman with regard to candles has come down for over a century or more and become ingrained in his nature.

In the days of the greatest glory of France, during the reigns of Louis XIV and Louis XV and even in the lifetime of the unhappy Marie Antoinette, candles were one of the most valuable court perquisites. During the reign of Louis XV the ladies attached to the Queen's bedchamber were paid but one hundred and fifty livres a year, — that is, about thirty dollars, which seems a beggarly sum. This they were allowed to in crease by selling the candles which had been once lighted. These ends of candles would not seem to be a large item, yet it brought them an income of five thousand livres — over one thousand dollars. The profit on candles was so great that it was shared among many of the courtiers. For instance, those candles which were not burned up when the play was over went to the members of the guard, while those which remained after the king's meals were finished went to other retainers of the royal family.

There was, and is, a certain elegance to wax candles; they give such a mellow and becoming light. Consider how handsome the dining-table at Mount Vernon must have looked when guests were bidden and the board was graced by the handsome candlesticks which may be seen on the upper shelf in Figure 195. All the arrangements of lighting at Mount Vernon were hand some, and the hall lantern, as well as some lamps of silver, can still be admired. They are in the National Museum at Washington.

Almost as necessary as the candlesticks themselves were the snuffers and tray to go with them, and it was a much sought privilege of the children of the house to be allowed to use them. Just how early they came into use it is difficult to say, but in the old play of " The Miser," 1733, one of the characters, Charles I Bubbleboy, is made to say: " have brought you a pair of the new hrvented snuffers, madam, be pleased to look at them; they are my Own invention; the nicest lady in the world may make use of them." A pair of nice, plain, old brass snuffers and tray is shown in the next figure (196), and they probably are well along in their second century, though their present owner cannot tell. They are Owned in Salem, Massachusetts, and are some of those things which the Owner "always remembers." Those made of other metals than brass were sometimes quite ornamental, but the brass ones are generally plain. 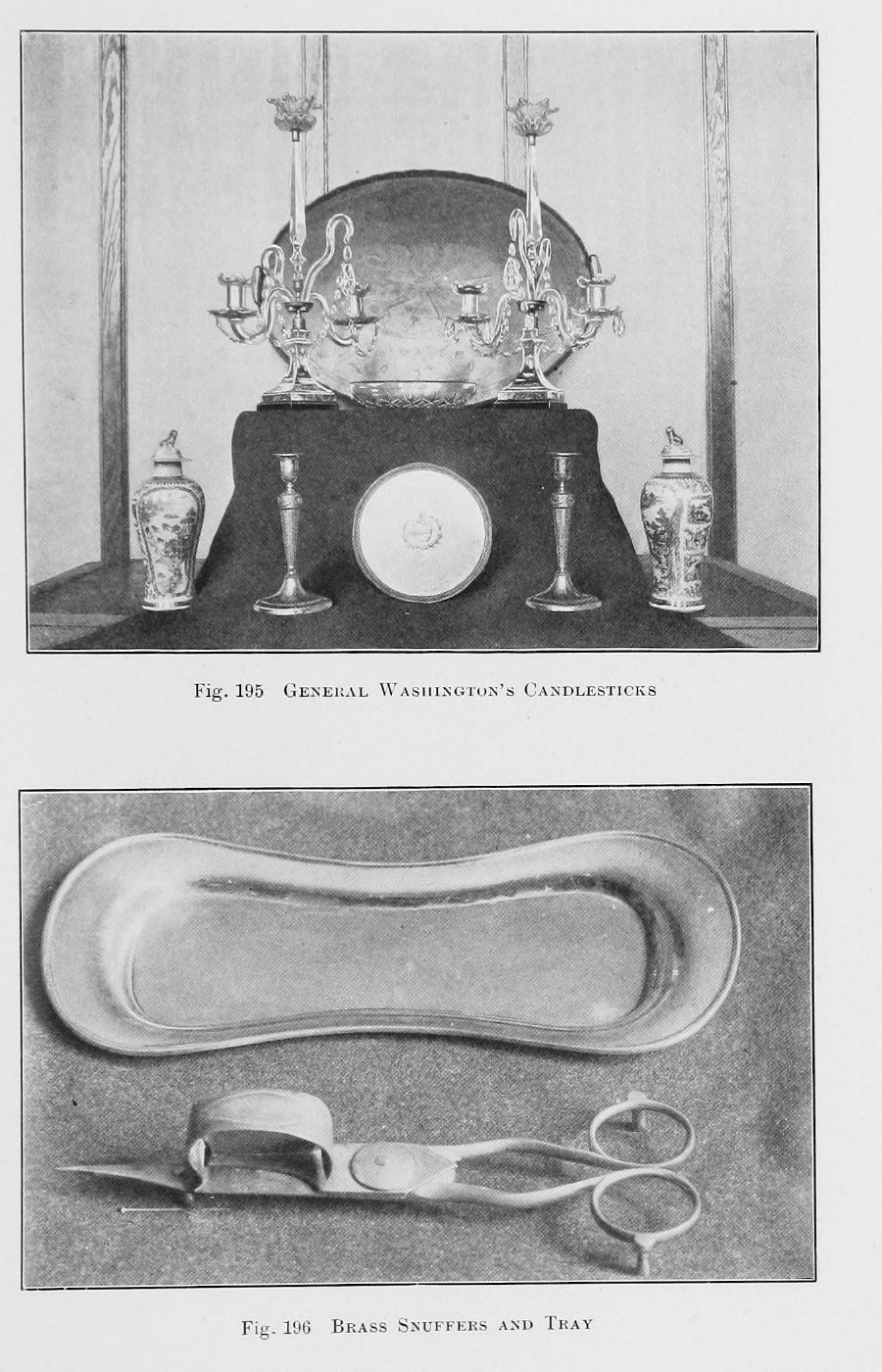 Brass sconces were also sent here from London and Paris, and a choice pair, rather florid in design, are shoAAn in Figure 197. I have seen Dutch warming- pans made into sconces, the very handsomely orna mented lids being used, and arms for the candles set on to them. The OAAmers had no idea what was the original purpose of the slightly convex circle which formed the most important part of their sconces. 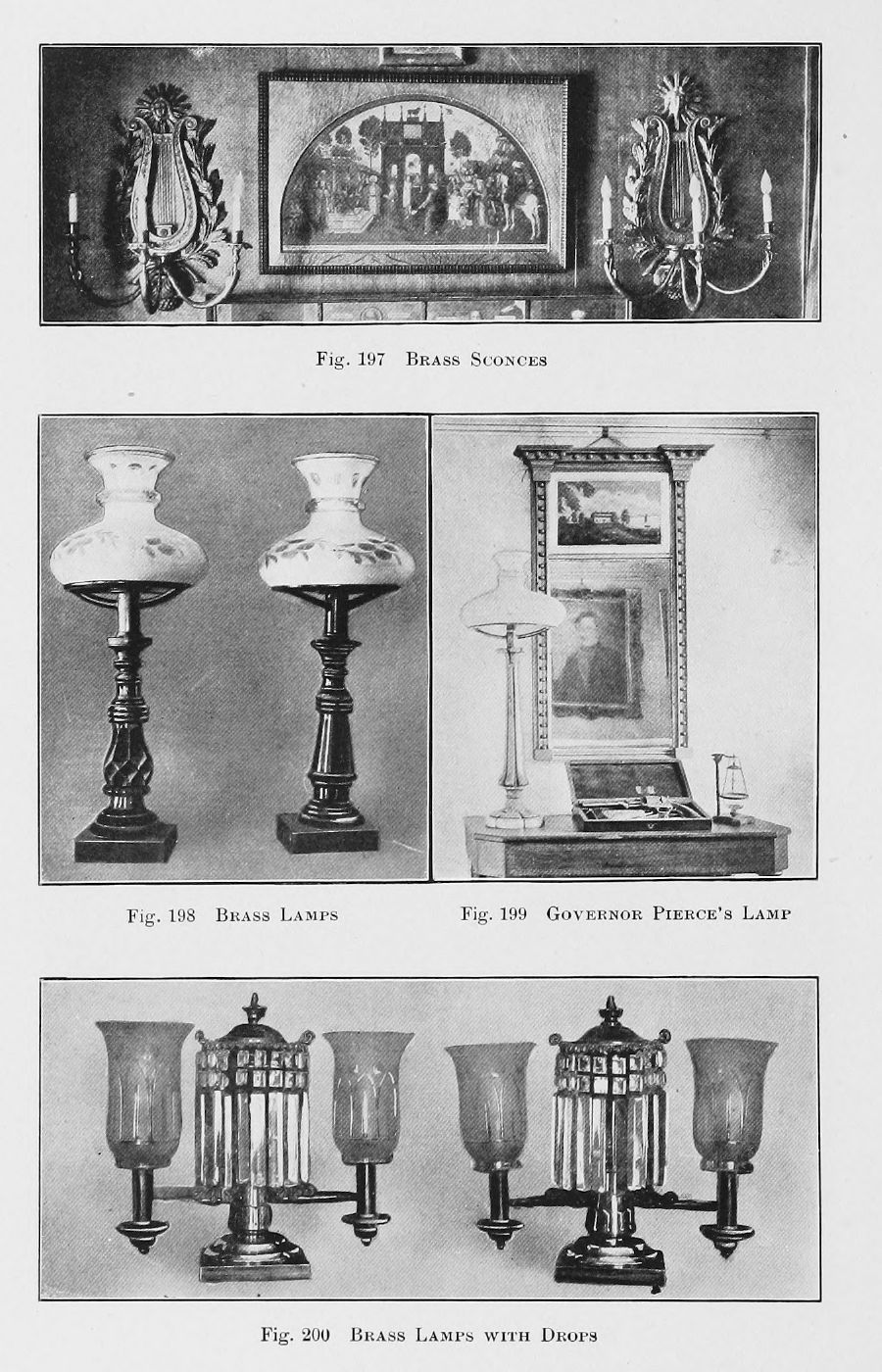 The first invention to benefit the simple lamps which had been in use so long, as I have said, was in 1783, when Leger of Paris invented the flat wick and a burner to go with it. In the next year Ami Argand, also a Frenchman, im'ented a burner to which he gave his name, and which is still the parent of innumerable modifications. With all these means for illuminating at hand, it was certain that some choice lamps should find their way over here. And they did. I show two of these lamps with handsome globes (see Figure 198). Many such lamps have been resurrected within the last few years, but something is wrong with them. We either do not know how to manage them, or we expect too much, for they give a poor light unless refitted with modern burners. A friend of mine who is rather antique mad secured some time ago a lamp like one of these, but, alas! it had no shade. Being a lucky collector, he laid it aside for the moment, and shortly after, being on a visit to a neighbouring city, during his rummages in second-hand shops he found a shade.

He bought it on the chance that it would fit, and car ried it home carefully in his hand. His luck stayed by him, and it did fit the lamp as if made for it. He fussed with wicks and burners till at last he got a light, but a feeble one. He never tried it more than once or twice, and he is now content to let the lamp stand on a nice old table and look well. I asked his wife Iioav it happened that she was so complacent with his collect ing so much miscellaneous stuff. Her reply was a wise one, and I have often thought of it: " He has no vices," she said; "he does not use liquor or tobacco in any form, so, as I think he ought to have a fad in some direction, I encourage his collecting." It is a strange thing, but judging from the hundreds of letters I receive, men compose the great body of collectors. They outnumber women two to one, and, as a rule, are quite as vague in describing some treasure which they want judged, as is the gentler sex! A fine lamp shown in Figure 199 once belonged to Governor Pierce, whose son was President Franklin Pierce. 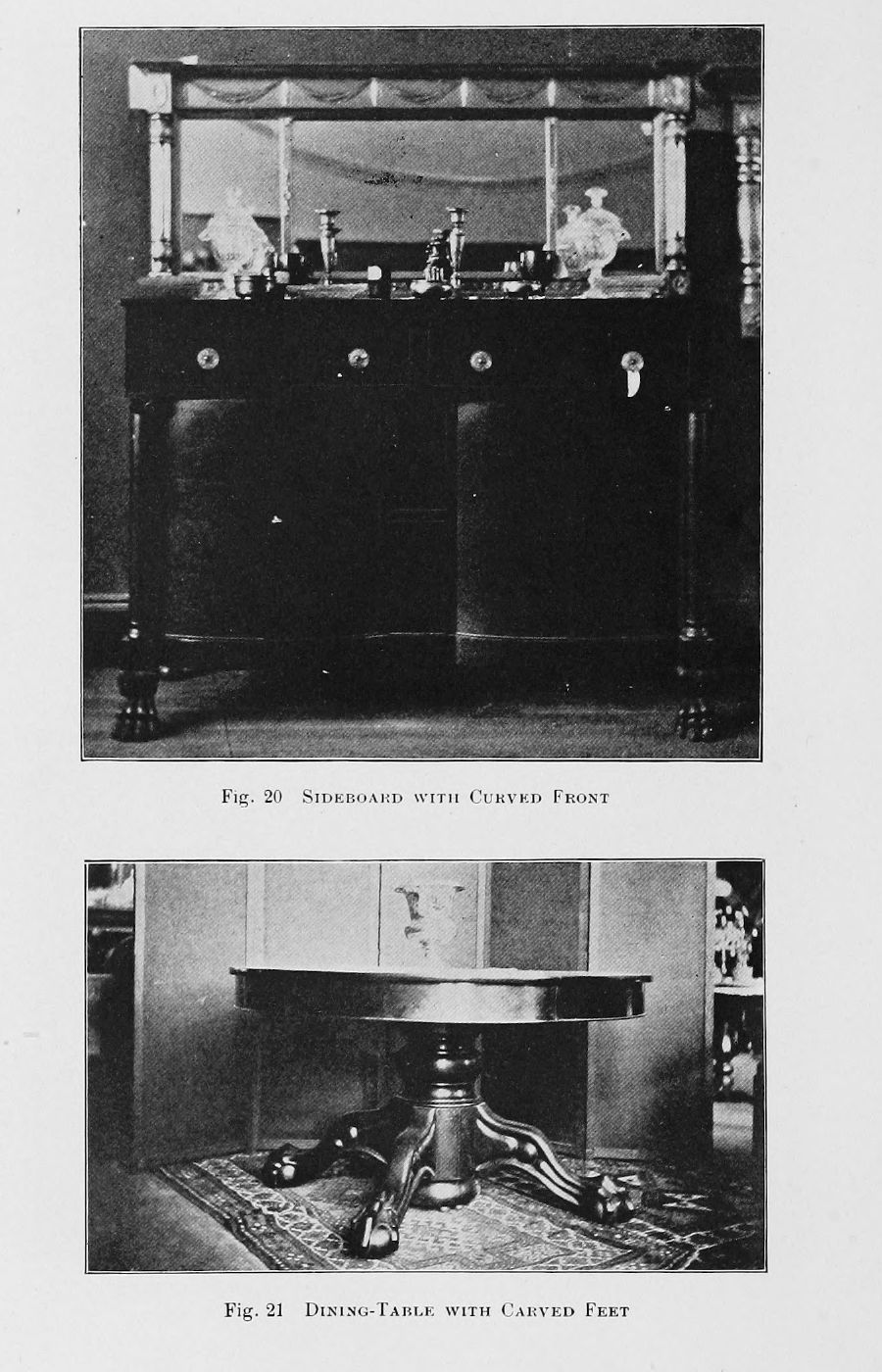 In Figure 200 are seen lamps of a more usual form than those just shown. They belong to about the same period and were for use on the mantels, the crystal drops making them very brilliant. The reservoir to hold the oil was in the centre of the lamp, and as these were made before the use of petroleum as an illumi nating fluid they must have burned paraffin oils. Another pair similar to some used at Mount Vernon are shown in Figure 201.