There was not an abundance of petroleum to be had until after 1855, although it had been known from most ancient times. In 1847 and during the next few years experiments were made in Manchester, England, with regard to using this oil for illuminating fluid. It was not till 1875 that one of the most productive oil fields ever known was developed in this country, making the oil abundant and cheap. Petroleum was first noted in this country, in the State of Ohio, in 1814. It was frequently found when digging wells for brine, and in 1829 a brine-well in Cumberland County, Kentucky, yielded such an enormous quantity of petroleum that it was regarded as a wonderful natural phenomenon. There were so many thousands of barrels of it going to waste that at last some ingenious Yankee bottled some up and sold it as a "cure-all" under the title of American Oil.

Public buildings were as badly off for lighting facilities as private, and churches were dependent on candles and oil lamps. Some rich parishes, like that of St. Michaels in Charleston, South Carolina, imported from England chandeliers of brass, which were hung by a chain from the ceiling, so that they could be raised or lowered. Some of these chandeliers held as many as forty-five candles, and it required constant snuffing to keep them in order. This same old chandelier in Charleston still hangs in St. Michaels, but within recent years it has been fitted for gas. [It was] worshipped both Washington and Lafayette, and it has seen pass beneath it victims of war and pestilence and has withstood fire and earthquake. Amid many other interesting relics which the church contains, the old chandelier still bravely holds its own. 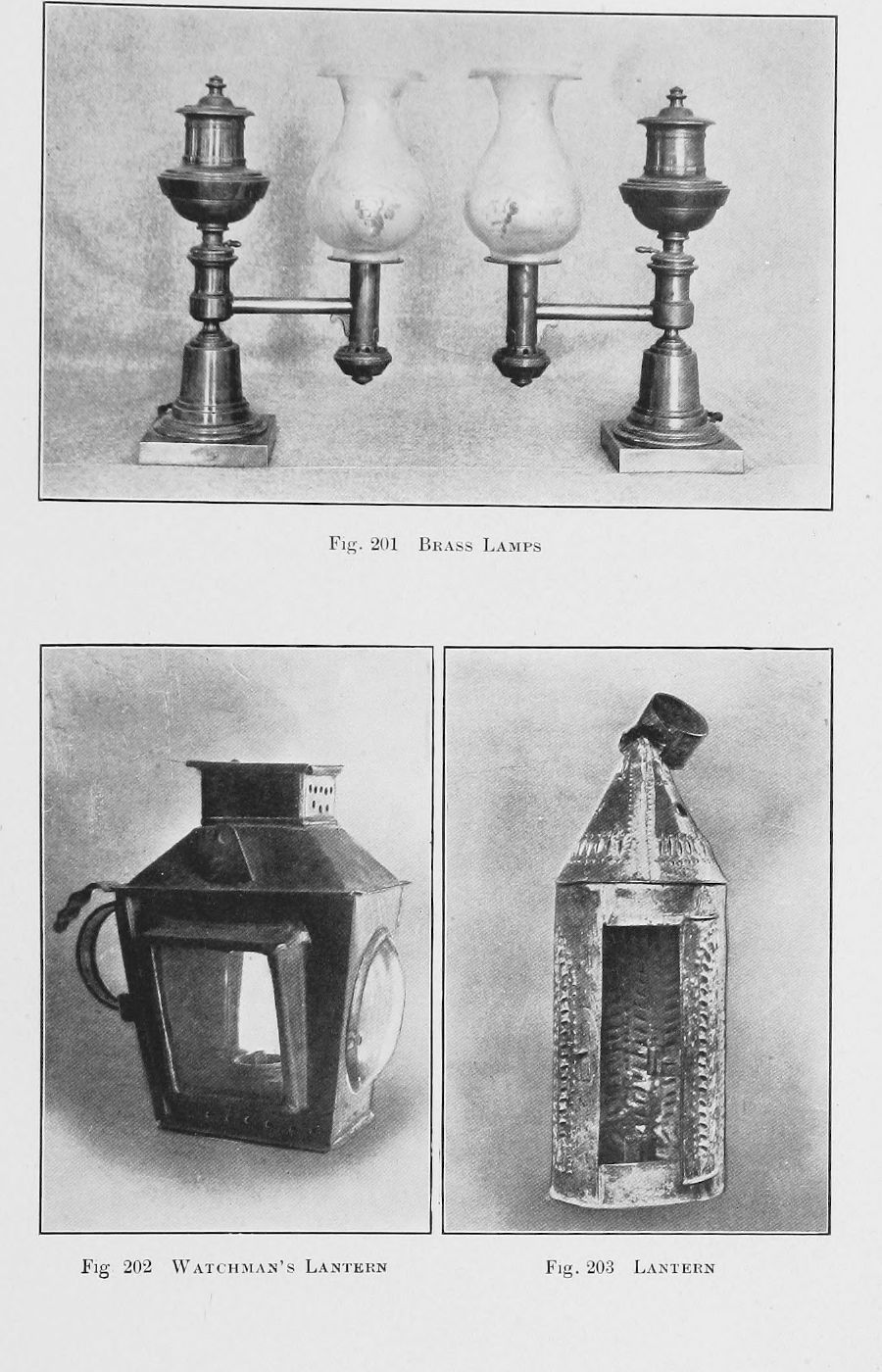 So far all the lights shown did duty within doors. When one stepped abroad, so dark were the streets and so badly paved that, after cocking one's bonnet and throwing on a roquelo, a stout staff was a necessity.

In Scott's Somers' Tracts, 1685, under the head of "England's Wants," is the following with reference to the lights:

"There is wanting a law wherein, although not all England is concerned, yet a great part thereof is, that, in the capital city of England, not only all the streets and lanes should be kept clean, that all sorts of persons might walk as commodiously in winter as in summer, which is of late years brought to pass in that great and populous city of Paris, in France; but also, as is done in that city all the winter nights, in the middle of the streets there should be hanged out so many candles or lamps, as that all sorts of persons in this great trading city might walk about their business as conveniently and safely by night as by day."

We did not suffer from highwaymen in our country as they did in England, such gentry being seldom met with here. To be sure, the " watch " had a lantern, — you can see one in Figure 202, — and you were lucky if you were going his way. Even New York in 1789 was a dirty city. Pigs were the only scavengers, and as they did not do their duty very thoroughly an appeal for relief was made to the High Constable of the city. It was printed in the " Daily Advertiser" of December 19, 1789, and begins as follows:

"Awake, thou sleeper, let us have clean streets in this our peaceful seat of the happiest empire in the universe."

Street lamps had been introduced in 1762, but they were few and far between, apt to go out, and often unlighted. In December, 1778, the firemen of the city formally complained that they had been greatly ham pered at a recent fire because most of the lamps had gone out. Things improved slowly, for in 1789 a citizen prayed for relief because, as not a lamp was burning, he had walked into a pump in Nassau Street, near the mayor's house. In the country districts the lantern was a positive necessity if one had to be abroad at night. Nor is it yet a thing of the past, as very well know, since I have found my way about several New England villages lately by its kindly aid.

The old lanterns were similar to the one pictured in Figure 203, and sometimes I find such as these hanging comfortably on a wooden peg in barns where the ox-bow is still in use.