IN the eighteenth century the term applied to this article of furniture when it was not called a " chest of drawers " was bureau-table or bureau-desk, or even commode-table, since commode was the name given to them in France; and in Chippendale's first" edition are many illustrations of what he calls French commode-tables," which are bureaus mounted on Ioav cabriole legs.

All the celebrated French makers lavished their choicest materials and elegant designs on these com modes, and were not so anxious to make a piece of furniture look like something else than what it really was as were their English contemporaries. Clothes press was another name we find applied to these bureaus on legs, and little by little the term bureau grew in use till it crowded out all the other names.

In the first Figure (308) may be seen a choice ex ample of the French commode, style Louis XVth, made of veneered woods with water-gilt ormolu mounts. In the time of the Grand Monarch, as Louis XIV loved to have himself styled, the rooms of the palaces and residences of the nobility were so lofty and vast that it required enormous pieces of furniture to fill them. During the Regency of Philippe of Orleans, the nobility depleted by the extravagance of the previous reign, and wearied by the work of Le Brun and Boulle, which had become monotonous in the severity of its lines, demanded something new. Under the Regency the im mense galleries disappeared, and the favourtie room was the boudoir within whose modest dimensions the furni ture of the previous reign could not find a place, so the call for something lighter and daintier was immedi ately felt. From this period dates the form of commode which exists to-day as the bureau, and though the Re gency was really but a period of transition, many articles survive which for beauty of form and graceful decoration cannot be excelled. 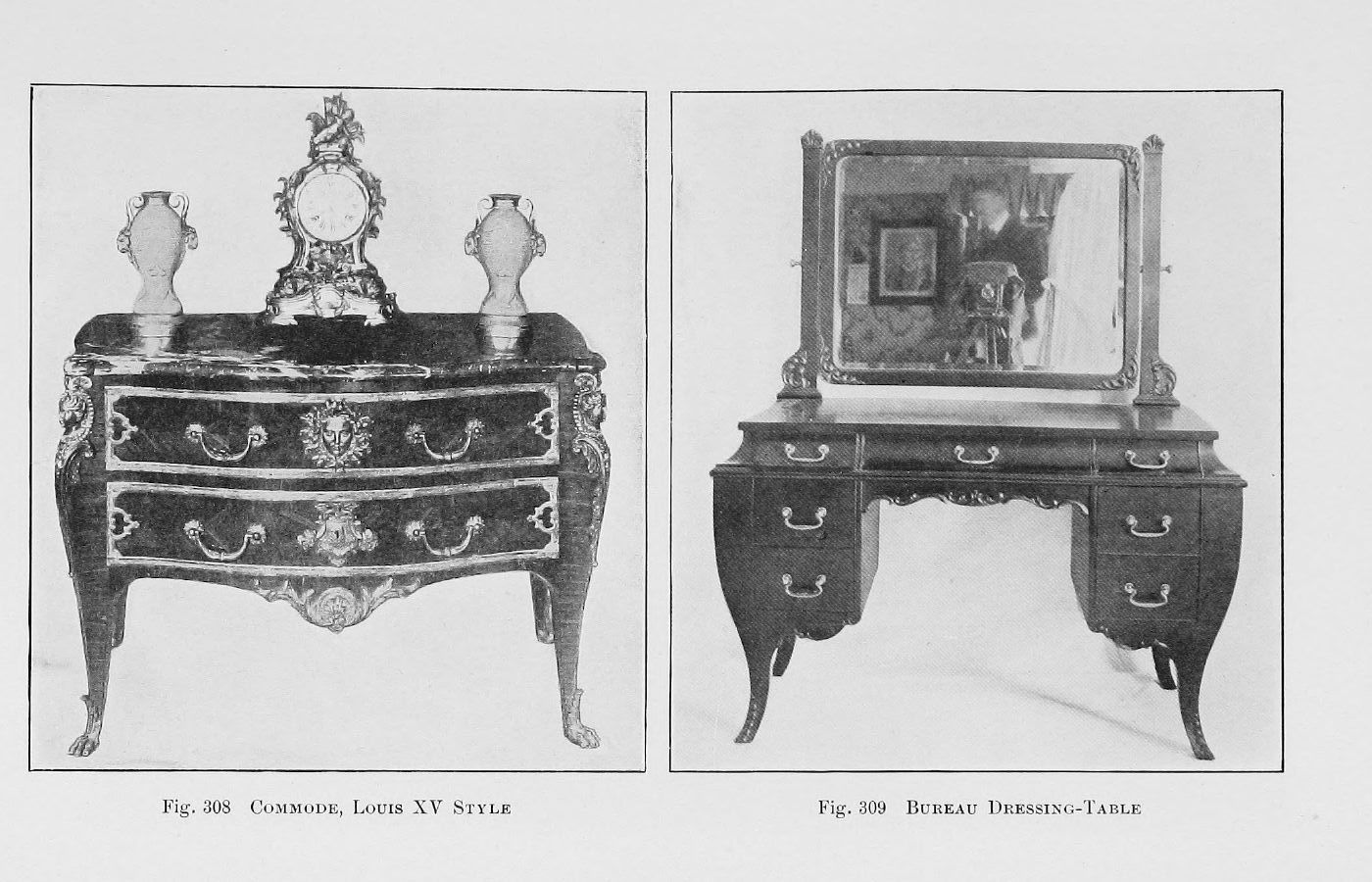 The task of the decorative designer of this epoch was by no means an easy one. This was the period of the elegant and dainty in art as well as furniture, and Wat- teau, Lancret, and Pater set the fashion to which the ebeniste had to rise, and where he had to struggle to asert his place. One of his first efforts was to break up the stiff and stolid lines of the furniture made by his predecessors, which was necessitated by its size. The watchword was no longer massive grandeur, but grace and elegance. One of the first moves was to bend the stiff leg; and here we see the introduction into France of the cabriole leg, which appeared on chairs, sofas, and commodes. This use was not original with the Frenchman, for it had prevailed for many years in dif ferent forms in Holland, Flanders, and England. The place of the metal marquetry was supplied by that of wood, which was used of various kinds and contrasting colours; and the opening of trade with China and Japan not only supplied the furniture workers with beautiful porcelain objects which could be inserted in the wood, but also vrith that exquisite Oriental prod uct known as lacquer. This was used in panels and medallions in commodes and corner cabinets, and the contrast with dark-toned woods like tulip and king- wood was extremely rich. The metal mounts were made in long and sweeping lines, and set upon the furniture in such a way that they seemed an integral part of and did not interfere with its graceful fines it, and proportions.

The French ebeniste did not hesitate to combine many kinds of wood in the same piece, selected not only on account of their beauty, but for the way one made an admirable foil for one another. Age has given to these pieces a golden and mellow sheen, to which the perfect proportion of the piece lends but another charm. Even the changeable climate of the United States has but little effect upon these admirably made articles, and they are as perfect to-day as when they were first made. Within the last month I have seen exposed for sale in Rochester a lacquer table, red and black with cabriole legs and water-gilt mounts, which must be well over one hundred and fifty years of age, and which, except for some damage to the top, still as beautiful as when it was made. It shines out from the dingy window, where it placed, with a compelling lustre; and one feels almost compelled to buy itif only to give it a name, and recover itfrom association which must prove most painful to an object which once had its place among the exalted of France.

The commode in Figure 308 has a top of marble, green and cream in colour, which seems to bring out the beautiful reddish colour of the woods. Ornate as this piece seems, it was but plain in comparison to those masterpieces of the middle and late eighteenth century in France.

In England they contented themselves with copying and adapting the French models, and in Figure 309 is a pert little bureau-dressing table on Hepplewhite's lines. It makes one almost smile, for the likeness is sufficient to make one recognise instantly the model from which he took his inspiration. The plain and elegant lines of the French piece are completely spoiled, and the knee-hole recess was a favourite at this time in many kinds of fancy tables.

The next example, Figure 310, is a museum specimen and a very handsome piece of furniture. Yet when you come to study even though both the lower bureau it, part and the upper glass fronted cabinet are inlaid with that floral design which was so common in the middle of the eighteenth century, you feel that this piece is made up of unrelated parts. The most obvious dis crepancy is the relative size of the two pieces. The bottom would carry easily cabinet top of considerably larger size, and the top of the bureau part protrudes too much to be in proper proportion. There is a certain sharpness to the carving of the cornice of the bookcase portion, and the pattern of the moulding of the latter does not match with that on the base of the piece. This putting together of two parts in this very article of furniture is a favourite device with dealers, and is one of the places where a quick observation will help you to detect the lack of symmetry which should exist between the two parts. In none of the old books by any of the English or French cabinet-makers do I find an example like this, the usage being that the sides of the top part shall come flush with the lower part, and not have that mm shelf -like projection which is seen in this piece. this by way of an example I of the many fake piecesgive which are bought in good faith, and then presented to the student as examples worthy of study. The lower part is a good marquetry kettle-shaped bureau of Dutch make, with good handles and massive feet. The sides are of plain walnut, and the back legs a simple bracket, as we usually find in furniture of Dutch or Flemish make. 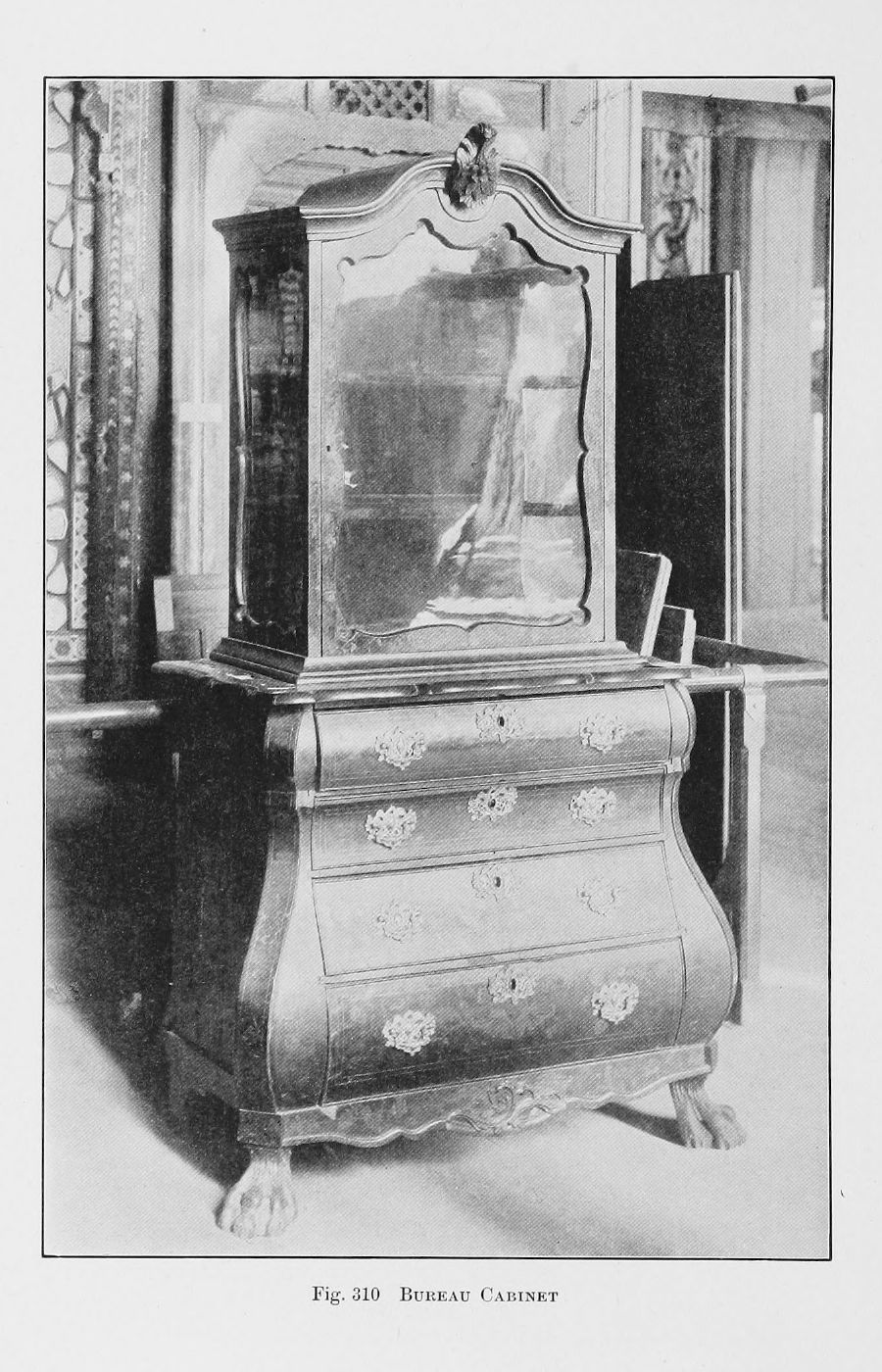 Just when the making of furniture of oak ceased and walnut was substituted it is hard to say. It is easier to put a definite date to the beginning of the mahogany period, which was about 1720. Roughly speaking, the oak period extended from the earliest times of which we have record to the later Stuart times. The walnut lasted from the later Stuart period, say 1670 to 1720. Of course there were many cases of overlap, and sometimes you will find a slant-top bureau desk, which should belong entirely to the mahogany period, made either of oak or walnut. Oak bureaus are such an anachronism that they cannot be regarded as genuine antiques, although their forerunner, placed on legs with turned stretchers, is by no means unknown. Walnut bureaus with slant-tops, particularly those made of burr walnut, exhibiting a curiously knotted grain, are plenty enough; and we occasionally meet with regular bureaus of wal nut also. Tavo are shown in Figure 311; one with a small Dutch foot and very elaborate handles, and the other with a block front. Neither of these are later probably than 1750, since the wood of which they are made and the style of handles are conclusive evidences of their age. The colour of old oak and old walnut, too, for that matter, depends largely on their treatment, and whether they have been subjected to the influence of smoke and dust. When the surface of a piece of old furniture comes to require what is called " doing over," never allow dark stains or varnish to be applied. Beeswax and turpentine with a wad of flannel are the proper articles for the amateur; and if the object on which you wish to expend your care is a table top, and if it is not excessively damaged, a few drops of linseed oil and a brick sewed up in several layers of flannel are your best materials. Drop a little of the oil on the table, then smear it Over the surface with a soft rag, and then begin to rub. It is in the latter process that success lies, and not in inundations of the oil. This same treatment is the best for the veneered walnut fur niture of what we call Queen"Anne " period. If your piece looks very badly, and has suffered from too fre quent applications of varnish, rub it lightly with fine sandpaper, which will remove the roughness, and then proceed with the linseed oil and polishing. This will eventually bring it to a better condition than the best French polishing, but it will not stand being stained with wine nor much water. 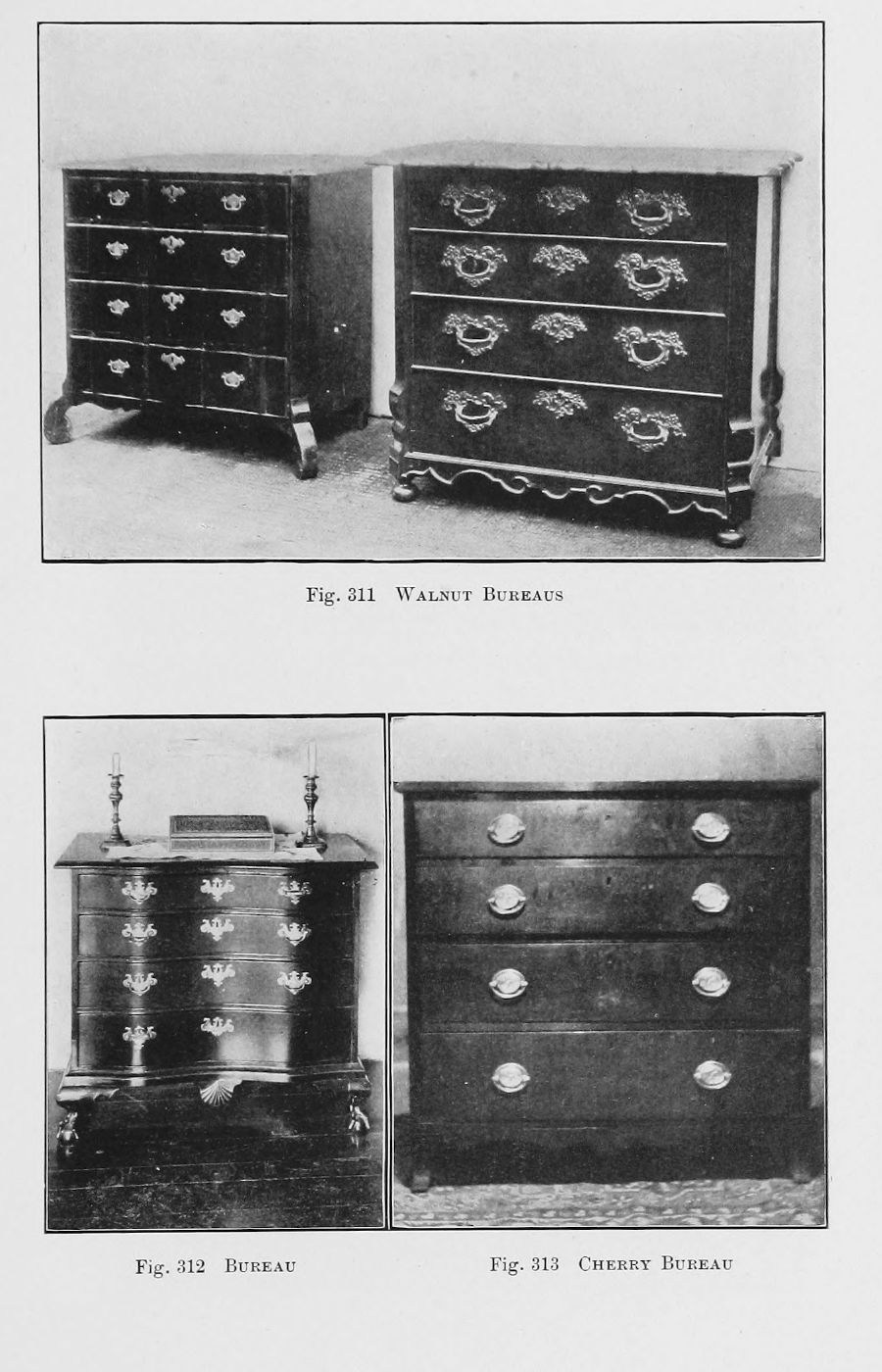