You cannot base your deductions as to age upon the wood used by cabinet-makers as the base to which they applied veneer, for a chest of drawers mav be of walnut veneered on oak, except the fronts of the drawers, which would be probably on some lighter wood. In old oak and early walnut furniture the parts will fit much less accurately than in furniture of a later period, when the cabinet-makers used mahogany and made from seasoned wood the choice pieces which are so admirable even to-day.

Spanish mahogany is the choicest variety of this fine wood, Honduras mahogany or baywood being distinctly inferior in colour and weight.

The subject of handles has been gone into at some length in the " Old Furniture Book," have to be mentioned here very briefly. and they will

Iron was the 3HS metal used for the oaken furniture, the locks and hinges often being elaborately wrought. When mahogany came on the field brass was used for handles and escutcheons. There are chests and cupboards dating show- to the fifteenth century still existing, and these handles of iron, in pattern a ring dropping from a flat wrought rosette or a round plate. Drop or bail handles, smaller at the top than at the bottom, are found on furniture of the next period, and these are also of iron. With the opening of the eighteenth century a solid pear- shaped drop takes the place of the bail handle of iron, and is most frequently of brass. As the century advances the bail handle becomes the ordinary one in use, the metal plate from which it hangs being first incised, with irregular outline, then pierced; while from the Chippendale period it was wOught, or pierced with more or less elaboration, having regard to the piece upon which it was to be placed. With the advent of Hepplewhite and Sheraton the plate from which the handle hung took a round or oval form with a bail handle. The plate was decorated with a beehive, stars, a lion, or various devices, and they also used the lion's head with a ring hanging from its mouth. Glass handles came in after the beginning of the nineteenth century, and to my taste are always a disfigurement to a rich piece of mahogany. Battersea enamel knobs with heads or scenes upon them were occasional, but are now few and far between, and it is hard to find enough to fit out a bureau. I do know of six, all bearing por traits of American heroes, which are fitted on the three drawers of a charming little mahogany writing-table.

A bureau of mahogany with a tall swinging glass is shown in the next figure, 318. It is not a common pattern, and has fine carved pillars and a cylinder front drawer. The front feet are carved to match the pillars, but the sides of the mirror and the posts which hold it are quite plain. It would seem that the mirror was a later addition, except for the fact that it is set in the top of the dressing drawers, and screwed in.

In Figure 319 is a commodious bureau-desk with the central portion of what is usually the top drawer letting down on a brass quadrant, and forming a writing-desk. The two deep drawers at the side are fitted for wine, and so wide is the top that this object would seem to be almost as suitable for a sideboard as a desk or a bureau. It is partly veneered, and shows a deep, rich, reddish-brown colour with those fine whirling veins which are so popular. It was probably made about the time of the other Empire furniture, say from 1800 to 1820. Its history is not known, but it was res cued and restored, and sent up from the South, where so many fine pieces of furniture are still to be had. I am constantly receiving letters from all the Southern States, telling of antiques of one kind and another which are Owned there. Some of them are amusing, some are pathetic. One of the former was from a woman whose husband was evidently well-to-do, who wrote me and sent me photographs of some really splendid things. There were elegantly carved chairs in Chip pendale's ribbon-work pattern, carved four-poster beds, a table of solid mahogany with claw feet, and some old blue " platters with those fine Cambridge views on them which would bring distraction to the ordinary collector. For years these things (which had belonged to her hus band's family) had sought an inglorious refuge in the attic, but had recently, owing to articles on the subject meeting her eye, been brought down, and set out in the parlour. No, she would not sell, though large prices were offered her. Fortunately she found out in time what her treasures were worth. 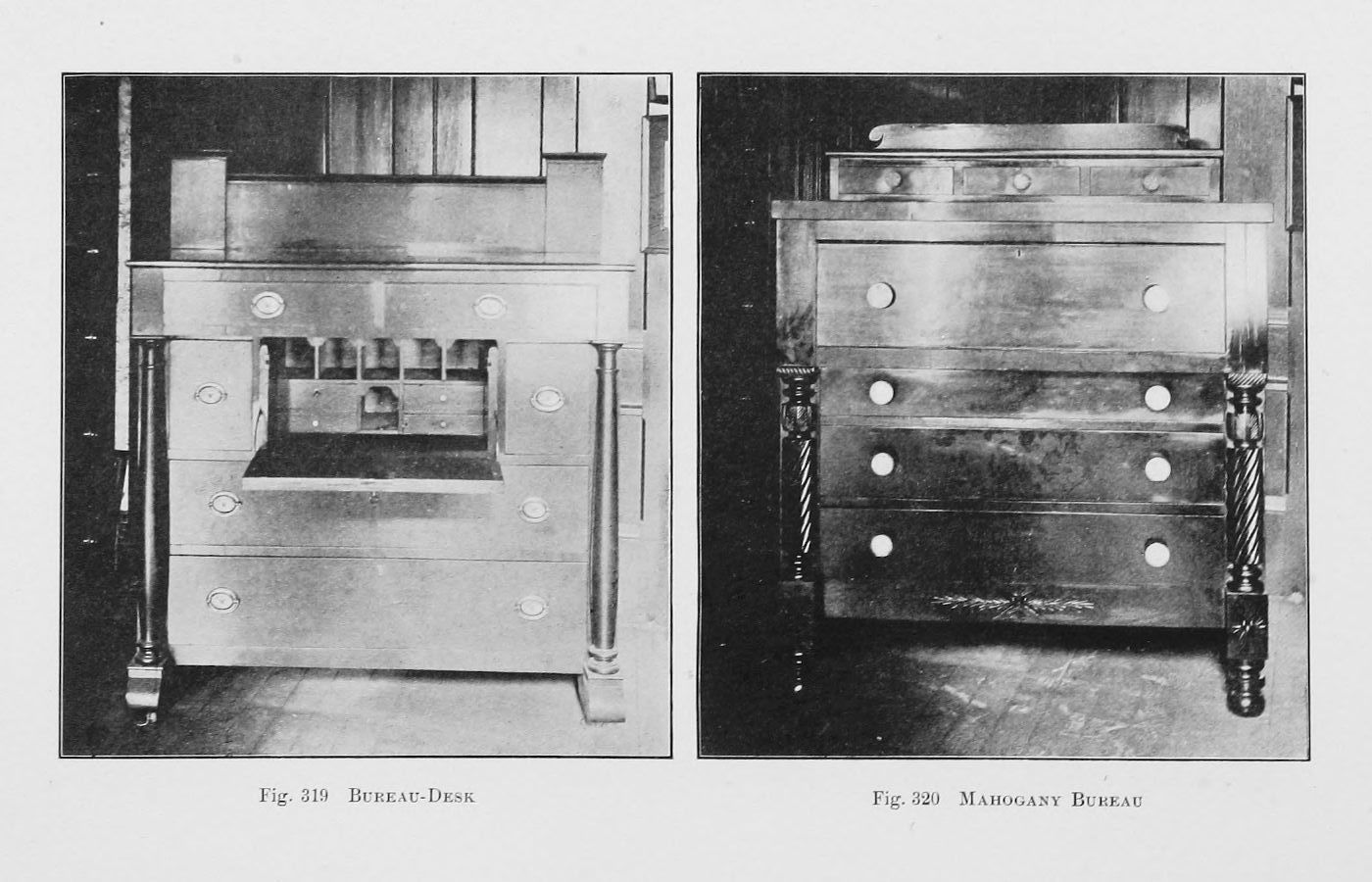 One of the many pathetic letters was from an old lady of eighty, who asked my assistance in selling two linen sheets, two pillow-cases, and an old hair trunk! It is consoling when your readers have faith in your ability to serve them; but sometimes too much faith is almost as bad as too little

The last bureau of all, 320, is also a derelict from the South. It has carved and incised work on it, and glass knobs. These are of the opalescent variety, which are even more staring than the plain white ones. This bureau was intended to have a little dressing-glass stand upon and was made in the opening years of the nineteenth century. It in excellent condition, and almost large enough to keep the belongings of a whole family safely. This and the one preceding are some of the last utterances of what might be called the American mahogany period. Then came the black- walnut age, which had nothing to recommend it, and which was responsible for the wholesale destruction of one of our finest native trees. Nobody displays black walnut furniture now who can get any thing else to take its place. Looking at the patterns in which this furniture was made, the unmeaning carvings with which itwas plastered, and the bad lines and proportions, one can be quite sure that there will be no revival of as it, there has been of mahogany, and the best thing to do "pass along."