While all specimens of antique furniture have an interest all their own, chairs seem to arouse it in a peculiar degree. There is a personal sentiment which they possess, a something which brings one in touch with owners long since dead, that is not shared by such objects as a bureau or a table, no matter Iioav venerable. If one could sit for a brief moment in, say, Will Shakspere's chair, wOuld it not seem possible that inspiration might be derived for a little sonnet? Or if one had for daily companionship the antique chair of Elder William Brewster, now at Plymouth, Massachusetts, would it not be likely that one would imbibe some of the cour age which upheld that doughty pioneer?

The oldest piece of cabinet-maker's work known is Queen Hatasu's chair, of the eighteenth Egyptian Dynasty, sixteen hundred years before the Christian Era. It is made of ivory, ebony, and various metals, and is in the British Museum, London. There is another old chair in which one may take a more per sonal interest, and whose early history is so enveloped in legend and myth that it is impossible to tell where tradition ends and truth begins. This is the Coronation Chair of England, in which all English sovereigns since 1273 have been crowned. The wood has become very solid and hard, but still shows in various places the traces of paint. In 1298 Edward I brought from Scotland the stone upon which all the Scottish kings had been crowned for centuries, and this was inserted in the seat of the English chair. It is a piece of coarse sandstone, twentj'-six inches long, seventeen broad, and ten and one-half inches thick. It shows very plainly in the photograph, which also displays to advantage the mm Gothic character of the chair (Figure 63). 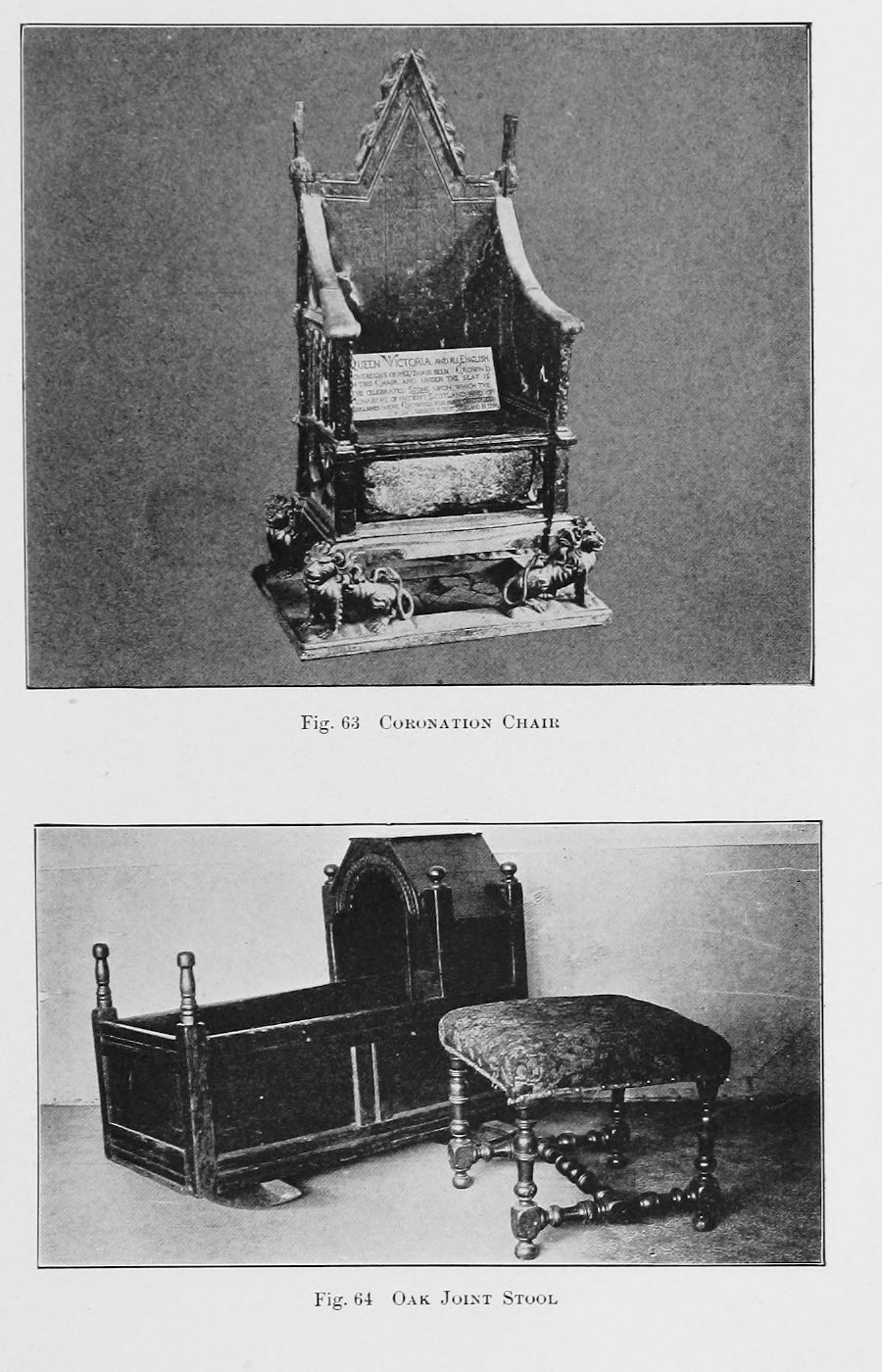 Sir James Ware, who lived from 1594 to 1666, writing about this same stone which is set in the Coronation Chair, says:

"Nor ought we to pass by unmentioned that fatal stone, antiently called liafail, brought into Ireland by the Tuath-de-Danans, and from thence in the reign of Moriertach Mac Ere sent into Argile to his brother Fergus, but which was afterwards inclosed in a wooden chair by King Keneth to serve in the coronation solemnities of the King of Scotland, and deposited in the Monastery of Scone, from whence it was at length removed to Westminster by Edward I. Wonderful things are reported of this stone, but what credibility they deserve I leave to the judgement of others. In particular fame reports, that in times of heathenism before the birth of Christ, he only was confirmed Monarch of Ireland, under whom, being placed upon it, this stone groaned or spoke, according to the Book of Hoath."

One can imagine what grief it caused to Ireland when this sacred stone, endeared by a thousand superstitious ideas, was removed and taken to England.

If you will hunt among old documents, both in this country and in England, you will find frequent mention of "joint stools." I could give many extracts from old wills which specify these stools, and I show one in Figure 64. The cradle does not properly be long in this article, but when I reflected how often a weary mother had sat on that same joint stool and rocked that cradle, I let it stay. It must have been in pretty constant operation in some of those pioneer families, where twelve children were an ordinary num ber, and twenty not very unusual! Such a cradle and such a stool, no doubt, found their way Over in many of the earliest lots of household gear, since, though these patterns were found by 1560, they were made till a century later, and when once part of the house hold goods of a family, descended till they fairly gave out from excessive wear. 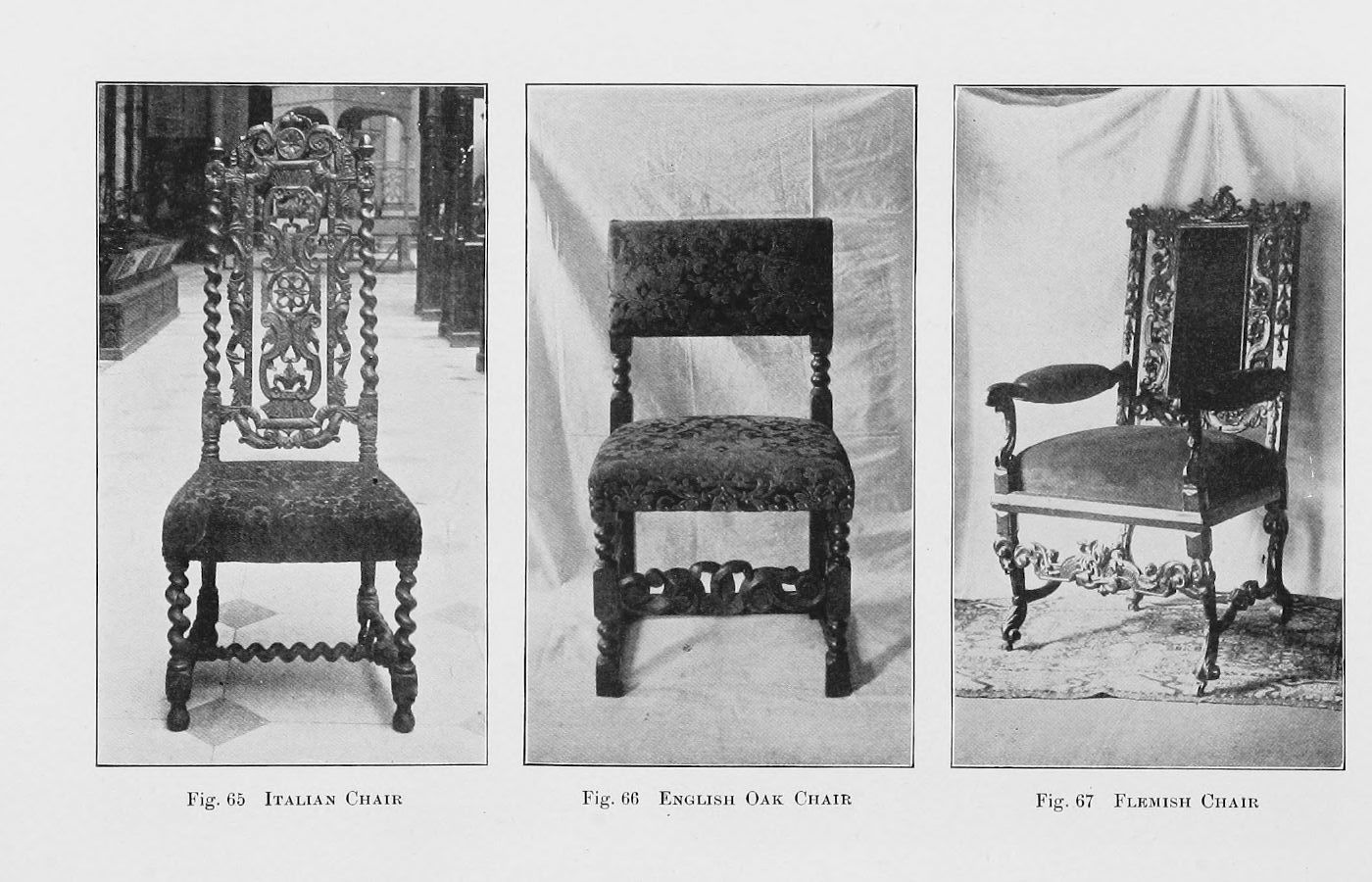 Stools were in common use at table till well into the seventeenth century. In an old play called " The Roaring Girl" (1617), when chairs, stools, and cush ions are called for, a chair is called a back-friend, and Sir Adam, who is faAxmred with one, says, " thank I thee for it, back friends are sometimes good."

Holinshed, who wrote his famous "Chronicles" before 1580, has much to say about the increase of luxury both in dress and household furnishings in all classes, and mentions what may be found in even the farmers' homes. He says: "The furniture of our housesalso exceedeth, and grown is in manner even to delicacy;and herein Ido not speak of the nobility and gentry only, but likewise of the lowest sort in most places of our south country, that have anything at all to take to. Certes in noblemen's houses it is not rare to see abundance of arras, rich hangings of tapestry, silver vessels, and so much other plate as may furnish sundry cupboards, to the sum oftentimes of a thousand or two pounds at the least; whereby the value of this and the rest of their stuff doth grow to be almost inestimable. Likewise in the houses of knights, gentlemen, merchantmen, and some other wealthy citizens, it is not geson to behold generally their great provision of tap estry, Turkey work, pewter, brass, fine linen, and thereto costly cupboard of plate, worth five, six, or a thousand pounds, to be deemed by estimation. But as herein all these sorts do far exceed their elders and predecessors, and in neatness and curi osity the merchant all other; so in time past, the costly furni ture stayed there; whereas now it is descended yet lower, even unto the inferior artificers, and many farmers, who by virtue of their old and not of their new leases have for the most part learned to garnish their cupboards with plate, their joined beds with tapestry and silk hangings, and their tables with carpets and fine napcry."

Burton, in his "Anatomy of Melancholy" (1621), speaking of luxurious selfishness, says that the great man" sits at table in a soft chair at ease, but he doth not remember in the mean time that a tired waiter stands behind him."

Some of the luxurious chairs of this period are shown in the next three Figures (65, 66, and 67), and are of Italian, Flemish, and English make, and all rejoice in rich carving, the one in Figure 65 being exception ally beautiful. This type of chair is more common in this country than one would deem possible, unless it is known how many of them were brought here. There is hardly an inventory among the well-to-do who ar rived here from 1650 and omvards that does not men tion among the commoner chests, stools, and forms at least one chair of this style.

In the inventory of John Oort, one of the husbands of Sarah Bradley, aa-Iio finally married the notorious Captain Kidd, is the mention of a dozen turkey-work chairs; and Theophilus Eaton, Governor of New Haven Colony, also died in 1657, had in his hall two high chairs with sett work 20s. 4d. each." These chairs varied in many ways. Sometimes the seat was leather, and the back also. The back might be of carved wood, like the one shown, or leather, cane-work, or set-work, or embroidery. They were made in Spanish, as well as Flemish, English, and Italian style.

The stall seats, "dwarf stalls " they are generally called, are relics from the cathedrals. They are found here sometimes, and are now used as hall chairs. The two shown in Figures 68 and 69 are, as are all the other objects so far shown in this chapter, made of oak. They date to the seventeenth century, and are French in their origin. The posts supporting the arms as well as the legs in the chair in Figure 68 are enriched with fine carving, and the open back gives it a lightness not possessed by the previous one. 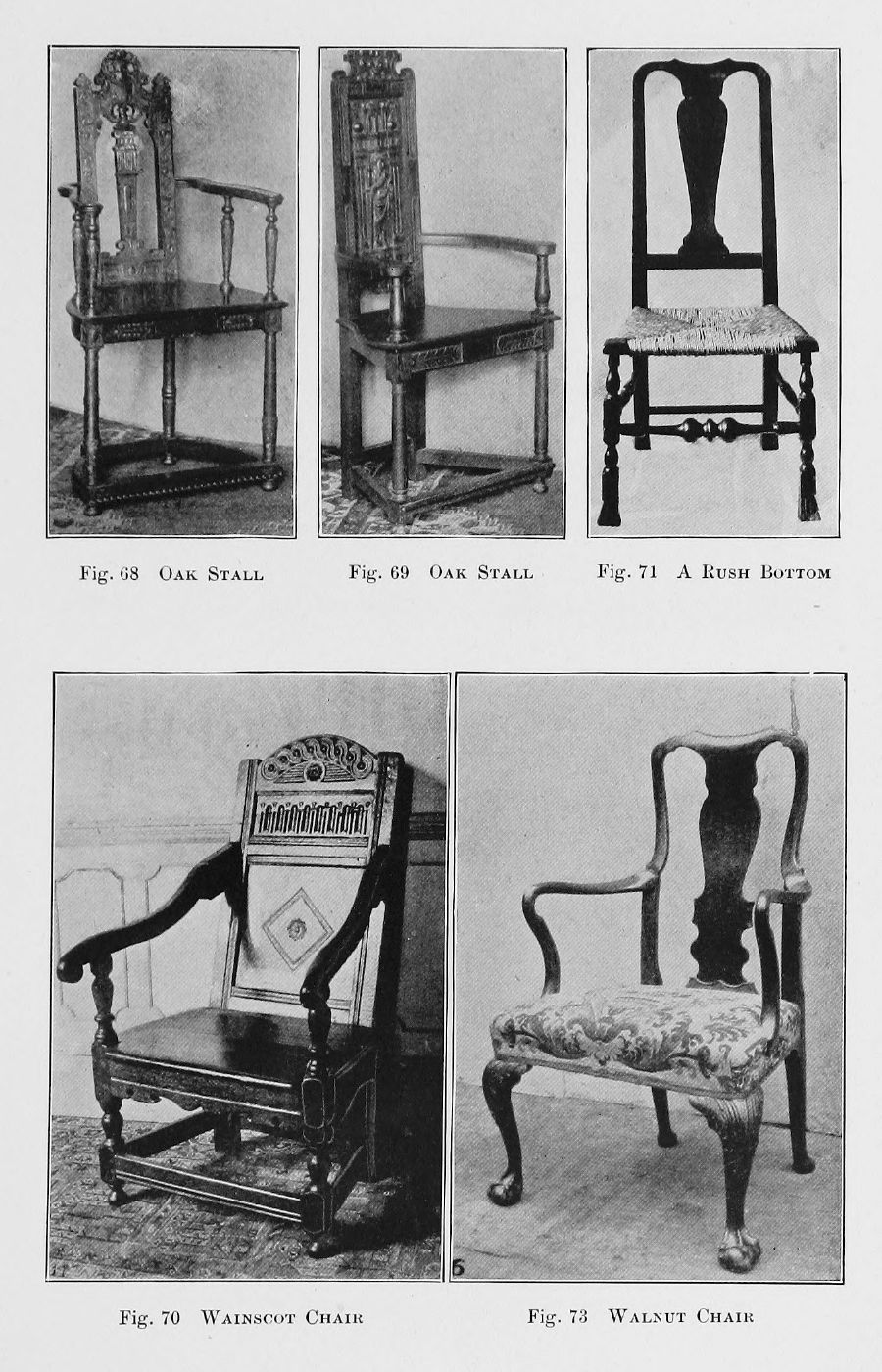