As the French always excelled the English in the magnificence of their interior furnishings, silver fur niture was by no means rare in that country. Louise de Querouaille, who was created Duchess of Ports mouth by Charles II, brought with her from France a taste for tliese costly bibelots. She was in favour with the English king for fifteen years, till his death in 1685, and her dressing-room, as described by John Evelyn, was truly regal. He says with reference to his visit to the palace:

"But that which engag'd my curiosity was the rich and splendid furniture of this woman's apartment, now twice or thrice pull'd down and rebuilt to satisfie her prodigal and ex pensive pleasures, while her Majesty's dos not exceede some gentleman's ladies in furniture and accommodation. Then for Japan cabinets, screens, pendule clocks, greate vases of wrought plate, tables, stands, chimney furniture, sconces, branches, braseras, etc., all of massive silver and out of num ber, besides some of her Majesty's best paintings."

It is supposed that some of the silver furniture now at Windsor Castle was from this very apartment de scribed by Evelyn. He tells of another dressing-room, this time in one of the great country houses where court fashions were followed as nearly as possible. This extract is dated April 17, 1673, and runs as follows:

"The Countess of Arlington carried us up into her new dressing-room at Goring House, where there was a bed, two glasses, silver jars and vases, cabinets, and other so riche furniture as I had seldom seene; to this excesse of superfluity were we now arrived, and that not onely at Court, but almost universally, even to wantonesse and profusion."

That Louis XIV possessed much silver furniture is most probable, and that much of it sought the melting-pot is also likely, when his exchequer became depleted from one cause or another. As late as 1691 De Launay, who was silversmith to the king, was turning out silver furniture, and some of it found its way to England, although the Edict of Nantes in 1685 had without doubt sent over skilled Huguenot silver workers among the refugees.

It can be noticed in the example given that the ornamentation is carried to the highest extreme, and all the pieces now remaining are of the same florid style. Cherubs' heads, coats-of-arms, floral forms, and flowing designs were all used, and it is a matter for speculation to the mind of a housekeeper Iioav all this elaboration was kept clean. In order to make the chairs and stools comfortable many splendid wrought cushions were used, and the effect must have been very rich and beautiful, if not very comfortable.

From the silver luxuriance of the chair just shown to the simple homeliness of the one in the next illus- tration (Figure 77) is a far cry. In the kitchen, even when silver was in the drawing-room, were to be found chairs, straight-backed and rush-bottomed, which were much esteemed, and made comfortable and serviceable seats. When the slats of the back were set in perpen dicularly they were known as " banister backs," and there were many of them made in this country, as there was always somebody in each town who could reseat them. It may interest readers to know that this chair was recently sold for fifteen dollars. I should like to say to owners of like chairs that their value is decreased by being "done over," and it is best to leave them exactly as they are, no matter how bare of paint. Their age is a patent of nobility, and to cover it up is in bad taste. 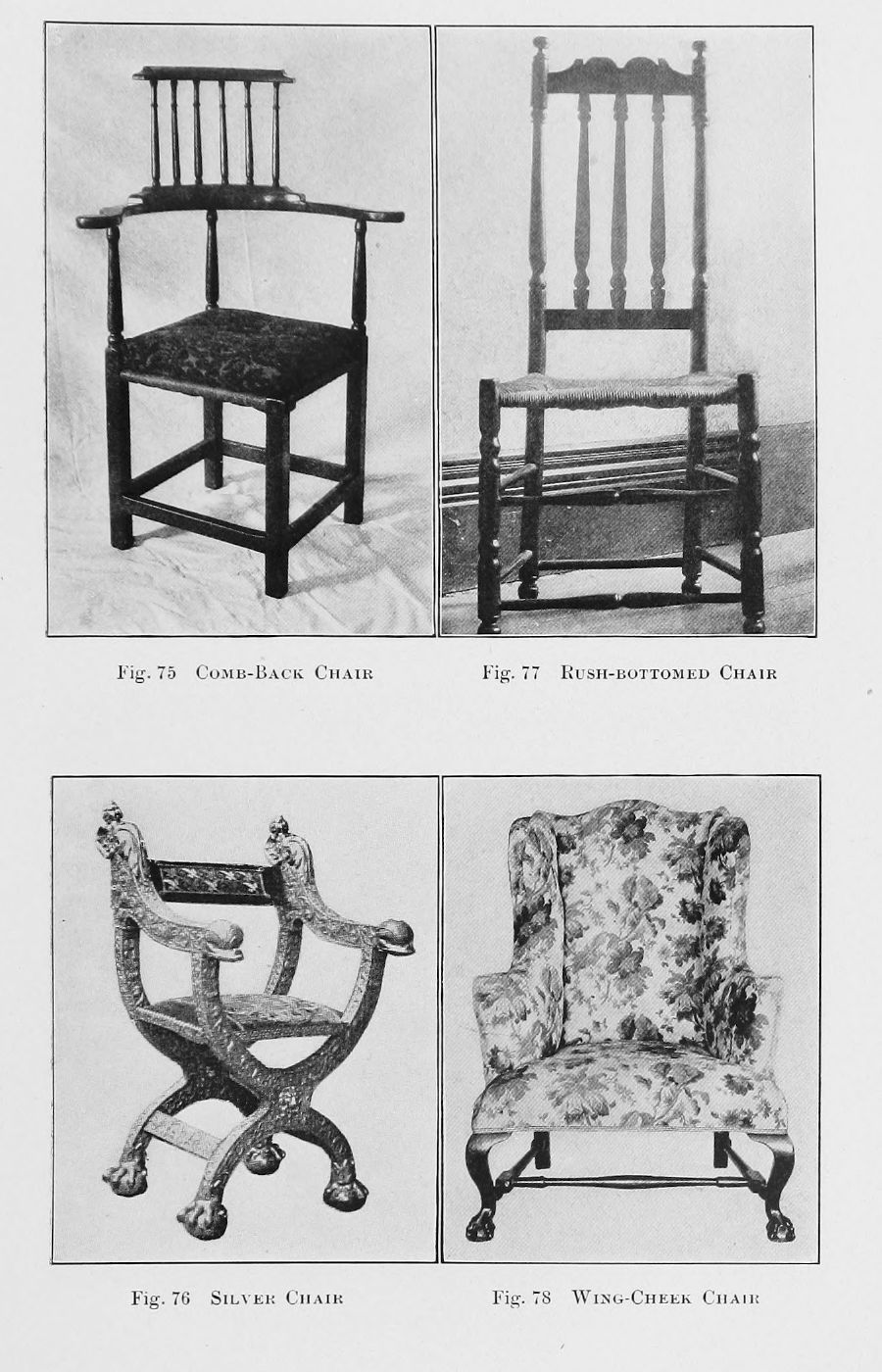 With elegance in the parlour and ease in the kitchen there came also a desire for something more comfort able in the bedrooms. This want was supplied by a style of chair known as the "which must have been much in demand in those cold and draughty houses of a century and more ago. With your face to the fire and your back and sides protected by one of these well-stuffed chairs, you might get what com fort you could in those " good old times " we love to talk about with affection, and yet would hate to have return. The chair in Figure 78 is one of these easy- chairs with ball-and-claw feet and an underbrace. When the feet were less ornamental a large ruffle was put on the edge of the chair and hung nearly to the floor.

I have mentioned how the splat, or centrepiece, of the back of chairs gradually took on a great degree of ornament. The two rich mahogany chairs given in Figure 79 show the early steps, when carving was be ginning to be applied to this portion of the chair as well as to the legs and back. Such chairs as these found their way to many a home in this country — to the wealthy Dutch settled in and around New York, up the Hudson, and in Albany and Schenectady, as well as to the homes of the English settlers. The Dutch in ventories, which were very particular, mention first in many cases the " feder bed," or the family Bible, and then the chairs. "Armed cheares" and chairs with silver lace, easy-chairs, Russia-leather chairs, and chairs with bull-hide seats figure many times, and show that, while "ye barbarous enemy" may have prowled out-of-doors, there were necessities and luxuries, too, within doors. 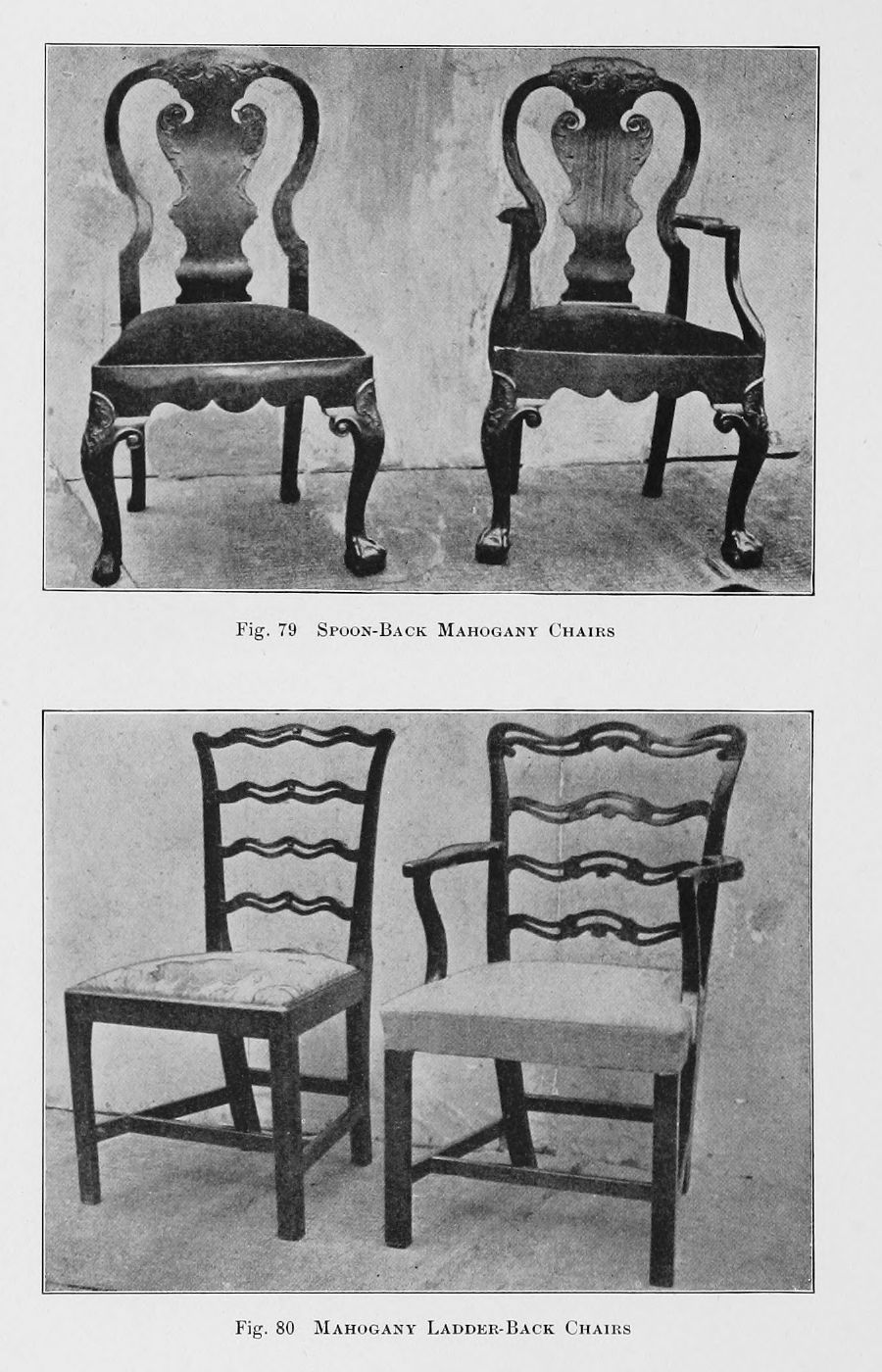 By 1750 England led the world in the beauty and worth which she put in her furniture, though in the previous century France had produced furniture of such elegance and beauty that it will never be excelled. Most of it was too fragile and costly for everyday use, and royalty only could afford to own it. The French patterns and designs were copied freely in England, as well as in other countries, till a great man, Thomas Chippendale, arose and, after feeling his way through copied work, founded a style of his own, which we look upon now as the epitome of what is best and most serviceable in fine furniture.

His earliest heaw chairs had the " bandy " or cabriole leg, as it was called, which has been shown in the chairs in several illustrations. He then began to use the straight leg, and put much variety into the backs," carving and piercing them, and having them ladder backs" (Figure 8), or splats with ornamentation (Figure 81). These are only simple forms of this great man's work, but they show his style admirably. It was Chippendale who first used mahogany to any great extent, and one cause which led to this was that he was primarily a woodcarver, and this close-grained wood gave beautiful effects. 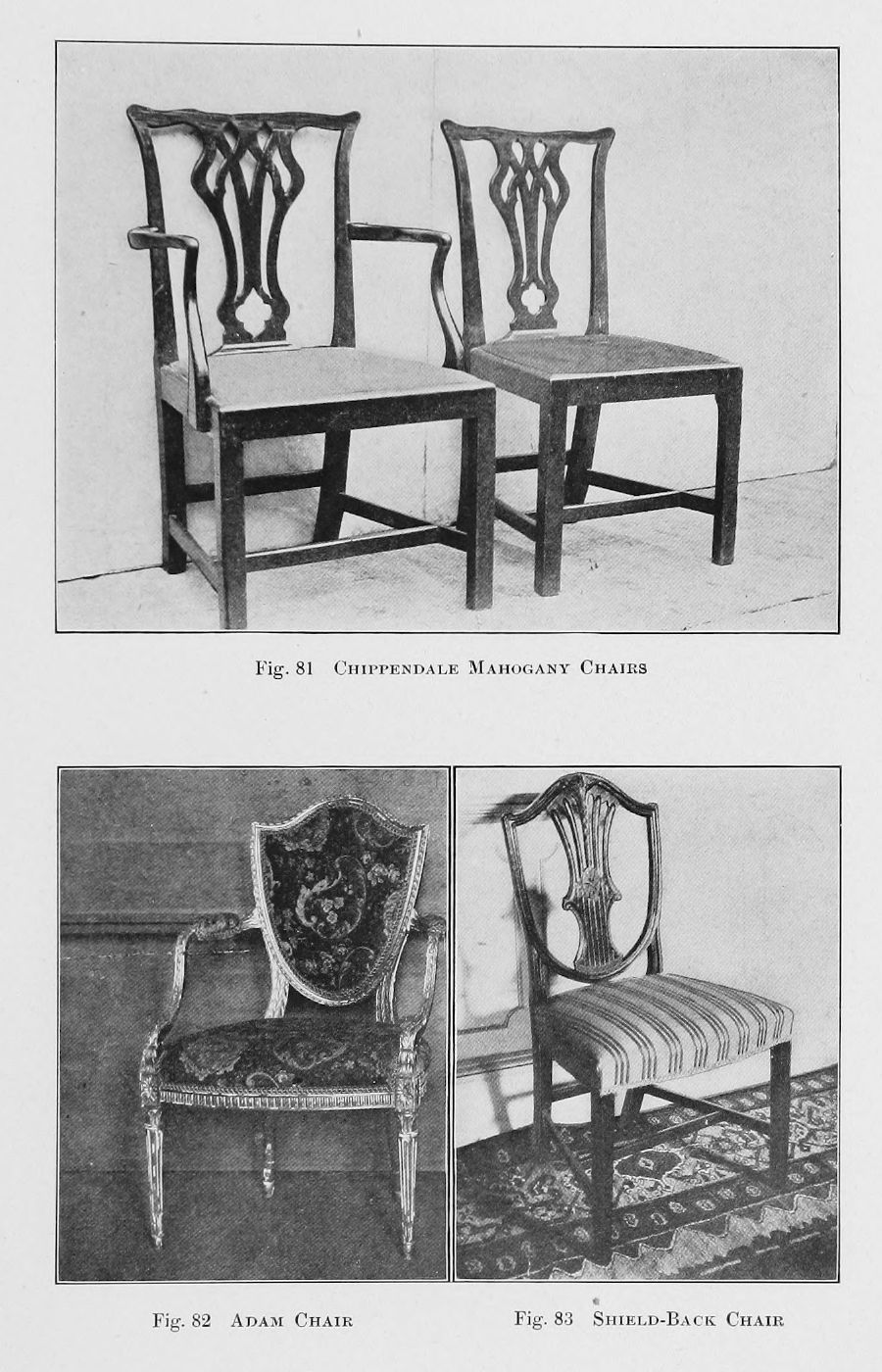 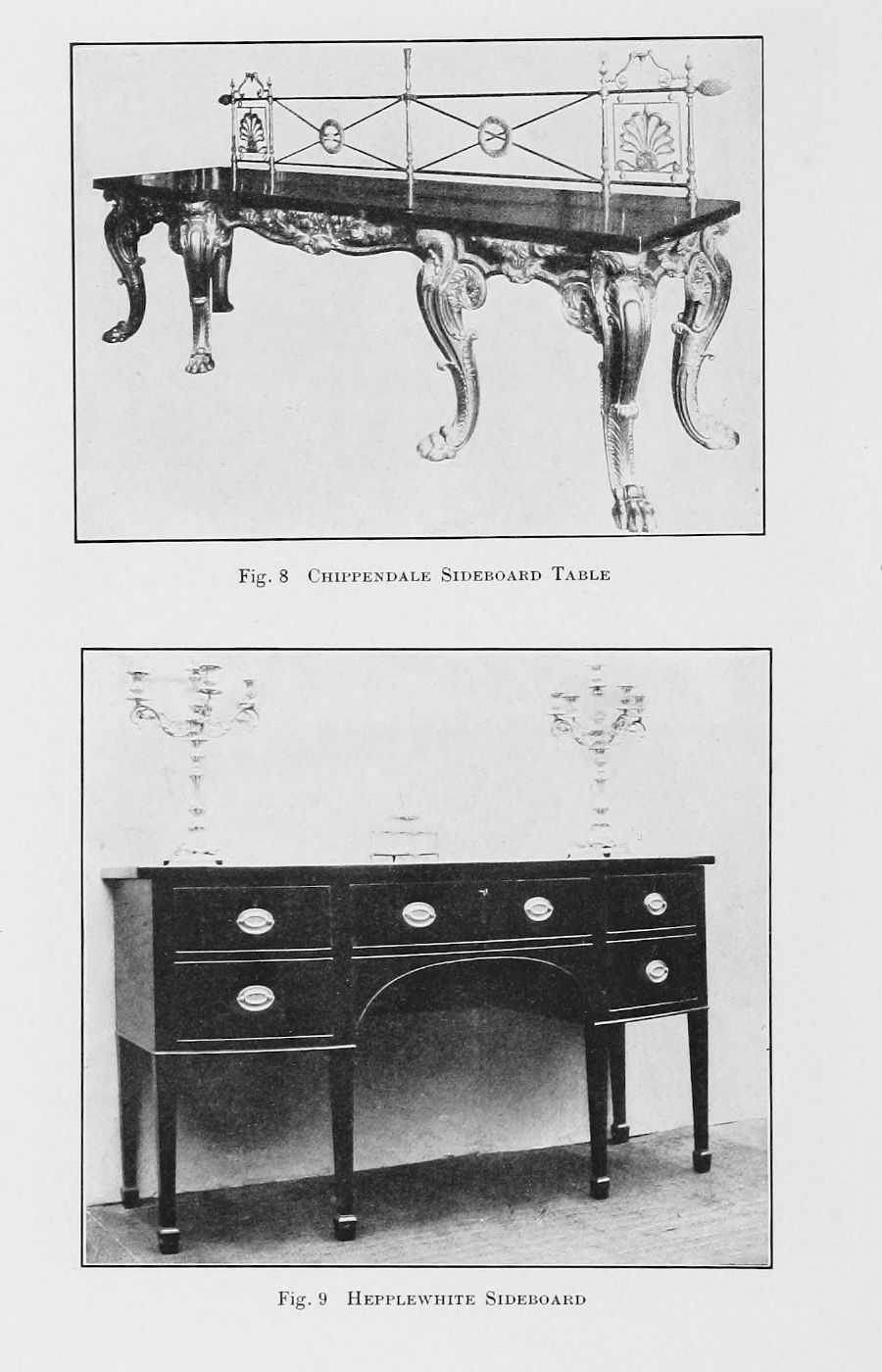