During the Middle Ages and through several succeeding centuries, the chest ranked next to the bed as the most important piece of household furniture. Of course, this statement does not apply to the courts, where more or less luxury was always to be found, but to the people composing the middle rank in life, — the bone and sinew of every country.

Beginning in Italy, where elegance and beauty flourished long before they reached the ruder peoples of northern Europe, we find the chest was a necessity in every household, particularly the stout one of iron to hold the treasure of the family. There were no banks, and each man stored his ducats as safely as might be, some of them, like Shylock, finding them fly with a wayward daughter.

From the sixth century the Jewish merchants were noted for their wealth. They were the money-lenders of the world, and to them is due credit for establishing the system of bills of exchange. About 1183 orders to pay money to a particular person were in use among the merchants of Lombardy and the South of France. General letters of credit were common in the Levant by 1200, while bills of exchange regularly negotiable were mentioned as early as 1364; and by 1400 they were drawn in sets and worded exactly as they are now.

The earliest bank of deposit instituted for the accommodation of private merchants was at Barcelona in 1401; so it can be readily seen what an important article a chest was. In Figures 143 and 144 are given some of these iron treasure-chests with their ponderous locks and great handles, showing what heavy weights they were expected to sustain. They have both seen service, and belong to the sixteenth and seventeenth centuries, bringing up in this very new country after a world of voyaging. 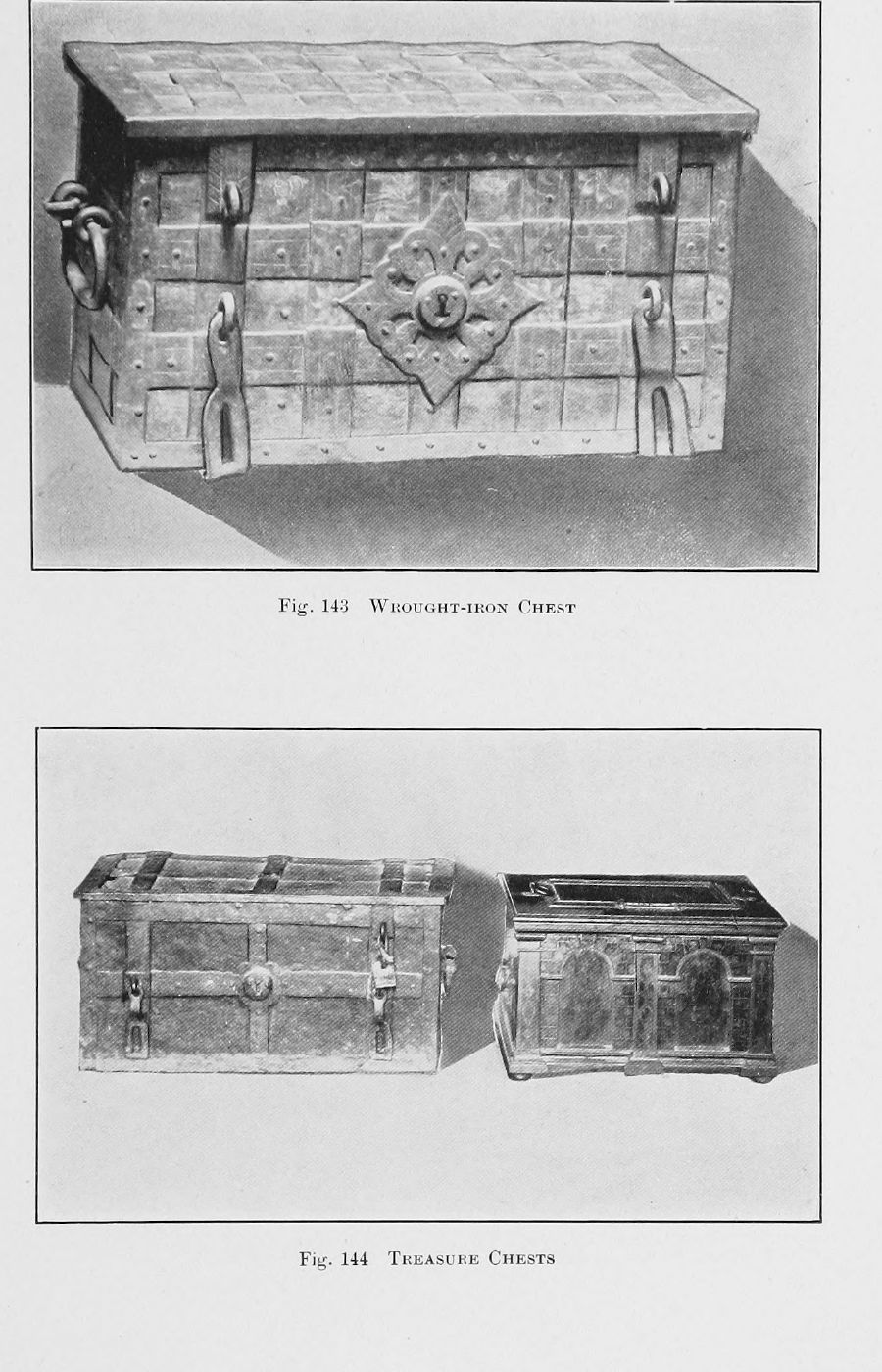 General Washington's household chest, which may now be seen at the National Museum at Washington, is nearly identical with the chest shown in Figure 143 on the left, the one on the right being more like one of the coffers used in churches.

A very interesting work Cupboards," by Mr. Frederick Roe., called " Ancient Coffers and goes into the matter of the old chests exhaustively, and he divides them into four classes, passing over those which are entirely of iron, and beginning with those which for their strength and ornament depend largely on iron work. The second class contains those which have painting as well as ironwork for decoration, while the third class are those which have fronts composed of upright slabs of wood, carved with ecclesiastical forms, like the smaller chest in Figure 144, which has a pattern of pillars and arches. Then, fourth, more secular chests, having on them knights and ladies, animals, etc., these subjects being incised or burnt in.

Throughout the fourteenth century there was a continued improvement all over Europe of what we denominate luxury and elegance, though Italy still presented the fairest picture of domestic life. The use of chimneys and glass in house-building are the two most important improvements in this century, and if the houses were so crude, it may be guessed how simple were their fittings. Indeed, everything tending towards luxury crept among the people slowly, and in the very matter of chimneys they were few and far between, the masons connected with the abbeys being the only ones who could build them, so that in the farmhouses they were not introduced till about the middle of the seventeenth century. King, writing in 1656 in " Vale Royal," says:

"In building and furniture of their houses, till of late years they used the old manner of the Saxons; for they had their fire in the midst of the house, against a hob of clay, and their oxen under the same roof; but within these forty years they have builded chimneys."

It does not exactly appear what was kept in the church coffers, already mentioned, unless it was the treasures, — i. e., votive offerings and plate, and in most churches at this early period there was little enough"of these. In Kennett's " Parochial Antiquities he says:

"Ela, Countess of Warwick, who died very aged, in the year 1300, was so great a friend to Oxford University, that she caused a common chest to be made, and did put into it two hundred and twenty marks; out of which such as were poor scholars might upon security at any time borrow something gratis for their wants; in consideration whereof, the University were obliged to celebrate certain masses every year in Saint Mary's Church. Which chest was in being in Edward IVth's time, and called by the name of Warwick chest." 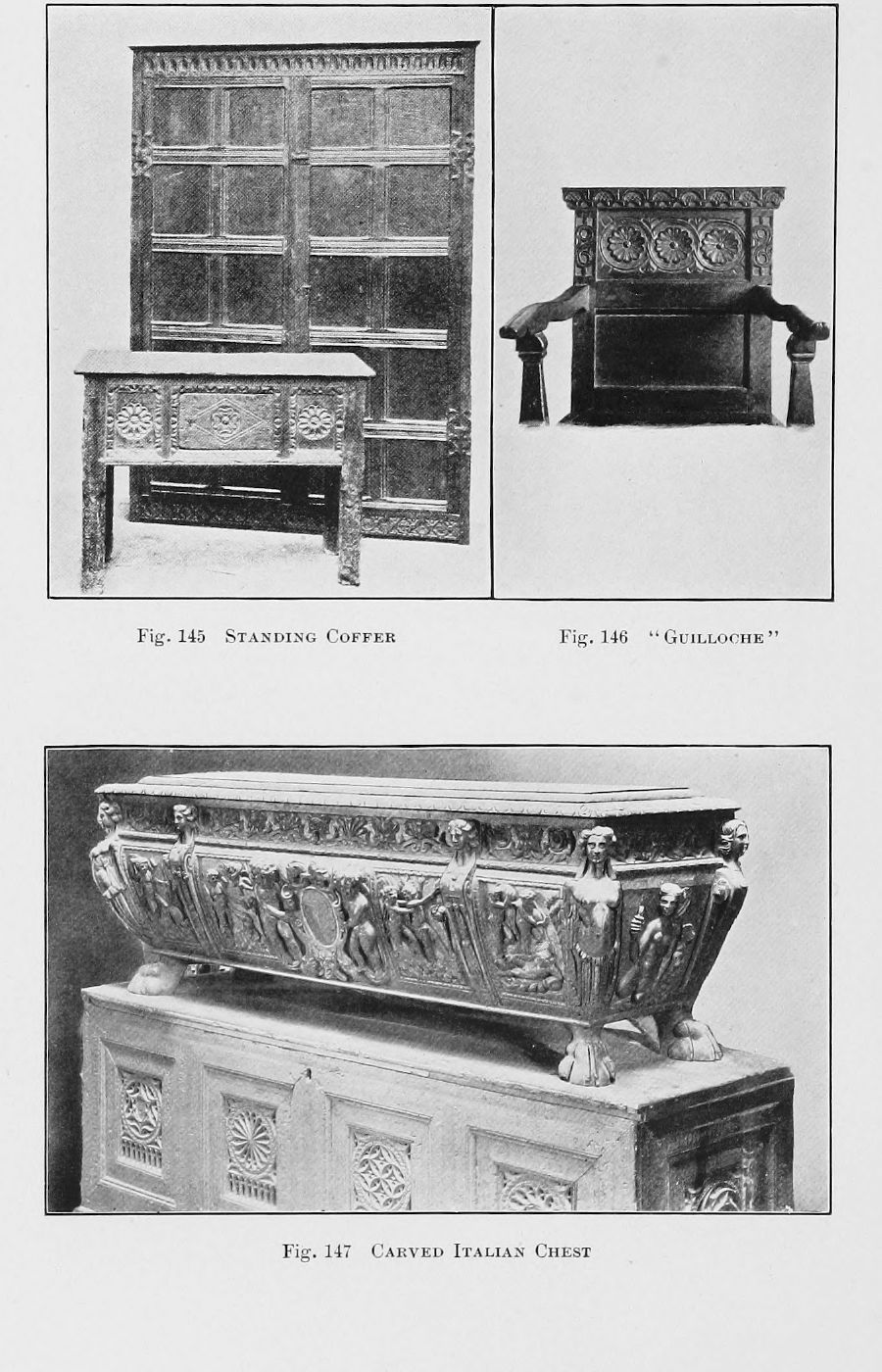 Very few of these ancient church coffers are still in existence, and even those are housed in museums. Domestic chests have fared better, though few can be obtained prior to the Elizabethan period.

In 1572 Skipton Castle, the ancestral home of the Earls of Cumberland, and one of the most splendid mansions of the North of England, had but seven or eight beds, and in none of the chambers were there either chairs, carpets, or looking-glasses. The inventory of the entire contents of this castle is given in Strutt's " View of Manners," and shows not how much they had, but how much they had not.

But to go back a little. In 1450, and from that date until 1478, Dame Margaret Paston wrote a series of letters from the town of Norwich, England, where she was living, to her husband in London, which give many interesting details as to the dress, manners, and furniture of that time. She writes him in 1454 that she is about to send up to London his " trussing coffer," or clothes-chest, and says further, that " his meny rob his chamber and rifle his hutches "; "hutch " coming from "huche," a French coffer or chest standing upon legs.

A hutch, or coffer on legs, is shown in the next Figure (145), though of a later period than that of which Madam Paston writes. A panelled oak cupboard goes with it, still retaining the original ironwork hinges. In these hinges may be seen a pattern known as the S-curve, which was used in furniture decoration at an early period. It appeared in flat carving, at the tops and sides of chairs (see Figure 146), and was even used in architecture, the tops of the towers of Hard- wick Hall, England, built in 1590, showing it in per fection. On the two side panels of the hutch is a rosette, which frequently forms the central ornament in a design called the " guilloche," which is a pattern formed of a continuous line of circles, each enclosing a carved rosette. Frequently the larger circles have smaller ones alternating with them, or they may be compressed so that there is no room for the central ornament. Common though this form of ornament is on English furniture, the fact remains that of it is Italian origin, — that the use of is, during the it Renaissance period, for the Italians took from the it Byzantine ornaments and used to great effect on the beautiful carved cassoni of the times. A good free rendering of the guilloche is found in the panel top of Figure 146; a wainscot chair, and the S-curve already mentioned can be seen at the sides.

Besides trussing coffers or chests, which took the place of trunks, and which were generally of stout oak planks iron-bound, there were others of more or less ornate character. The most important of these, at least in the eyes of the gentler sex, were those known as "marriage chests," generally bought while the daugh ters of the house were still children, and filled by de grees with linen and woollen cloth, woven under the careful eye of the mother.