In Figure 147 is one of these chests of Italian origin, which belonged to some noble and wealthy family. It is not hard to conjure up the store of fine linens, lace trimmed; the pieces of rich silk damask and cloth of gold; the Venice points and the lengths of velvet which were laid away year after year to swell the marriage portion of the daughter. Sometimes suitors avIio be trayed a tendency to lag could be made to show a more coming-on spirit by a view of the chests and their contents, which were the lady's dower.

Like almost everything else of Italian origin, the carved chests were extremely beautiful, whether of the Gothic period or of the more sumptuous Renaissance and later. The chest shown in Figure 147 is of carved oak. They were made of other woods as well, painted and gilded, inlaid sometimes with ivory, ebony, tortoise-shell, lapis lazuli, or anything which the mind of the maker conceived would add to its beauty. On some of these old cassoni were painted figures and scenes by the famous artists of the times, sometimes portraying events in the life of the owner, but oftener, if for a bride, groups of flowers and cupidons, making these chests to-day as valuable as if wrought in gold.

Our old carved chest is sixty-six inches long by twenty-four in height, and has preserved its beauty almost unimpaired. No better example of the period which preceded the elaborate carving could be given than by the glimpse we get of the old Gothic chest on which it stands, the panels showing designs similar to those found in the stone-work of the church-windows of the same period.

The Venetian or Florentine bride not only had her rich clothes and linens, but her jewels were dealt out with a lavish hand. In the inventory of the trousseau of a fifteenth century bride of noble but not royal blood, the rich stuffs are calculated by the pound weight and the " great pearls " by the gross. In such a little chest or coffer as that shown in Figure 148 would these be kept, together with her girdles of gold and silver, her enamelled and jewelled garlands and buttons. There are still traces of gold and colours on this chest which could tell so much if it would, and there is a ponderous lock so that thieves should not break through and steal. There is a little of everything carved upon it, comic and tragic masks, cupids, scimitars, dragons, and gar lands, yet done with so much skill that the result in is finitely pleasing, as isalmost everything of the florid period known as Renaissance. 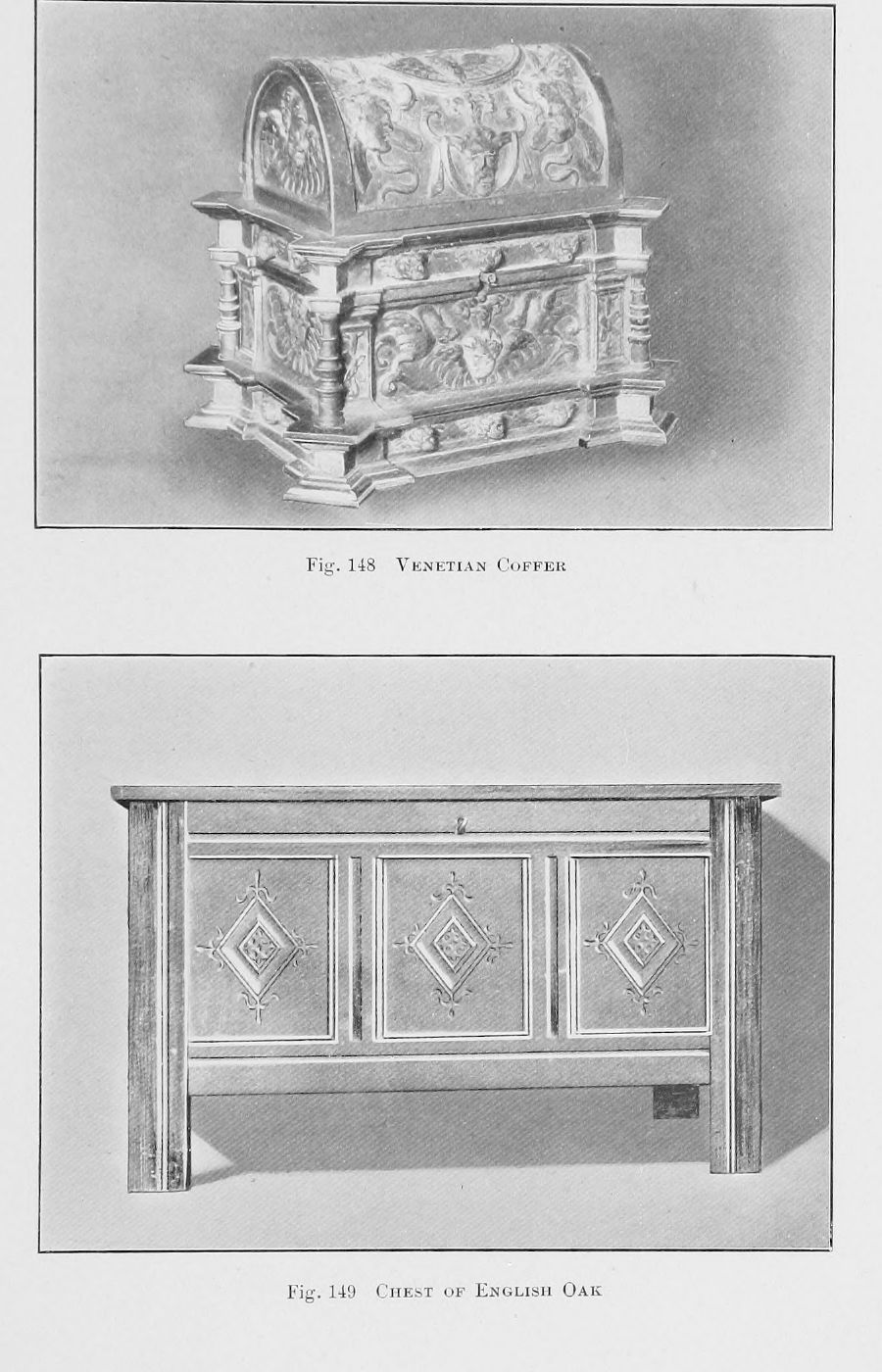 But while these chests are interesting in every way, and are to be bought in this country, since it known that we are becoming the collectors of the world, is it is with homelier and less ornate articles of this class that our interest chiefly centres. When the Pilgrim Fathers and Mothers packed their scanty belongings and stowed them away in the hold of the Mayflower, their goods were mostly contained in chests, stout ones no doubt, and, I think we can say, entirely guiltless of carving. These chests for use in travelling were called" chests" or "standards," and were simple, box-like affairsship with locks and no legs, and often with handles. 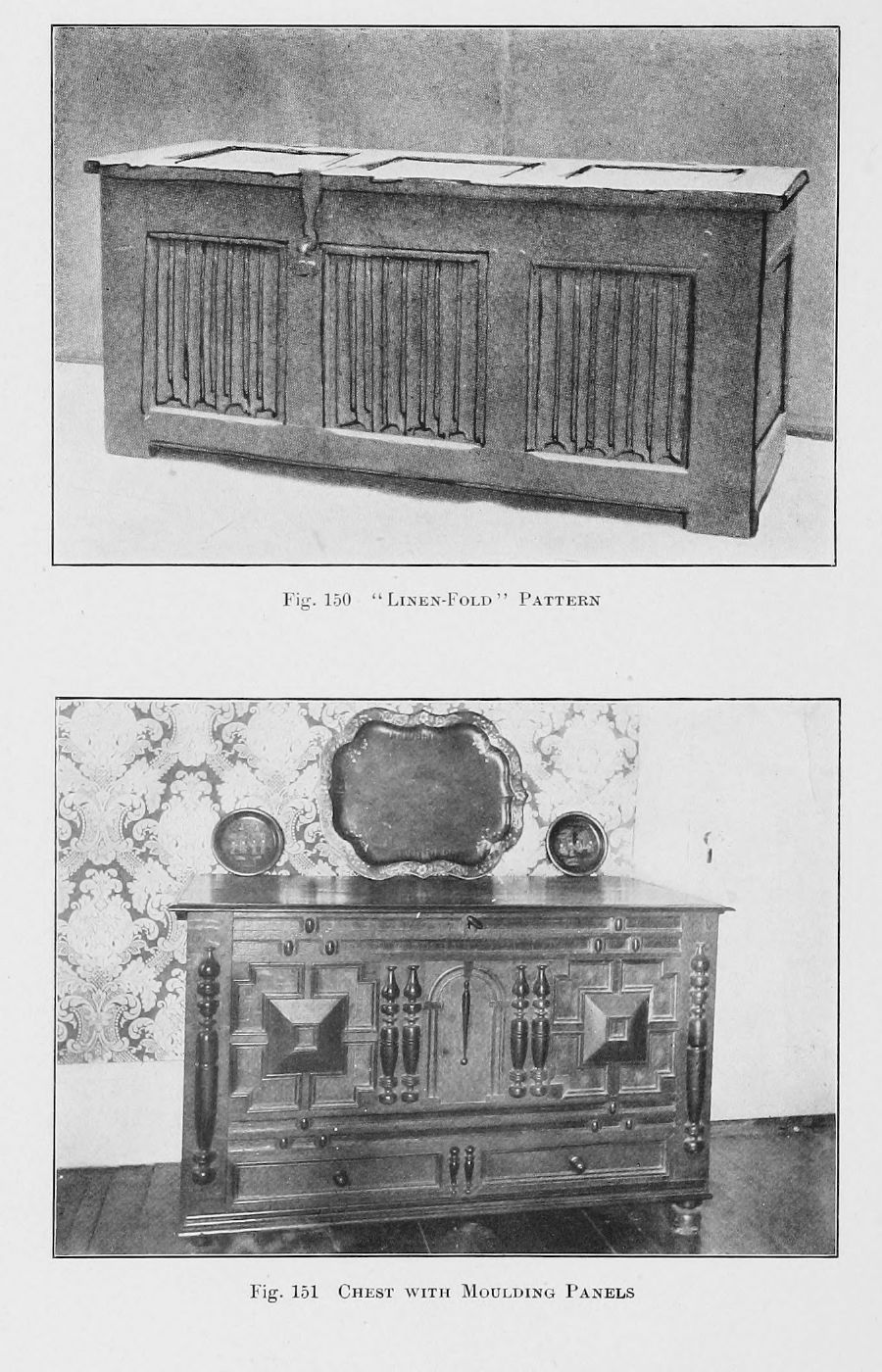 There were, even in those early days, some chests brought over which stood upon legs. The legs were formed by continuing the "stiles," as those boards which hold the sides, back, and front are called. You can see them very plainly in Figure 149. The boards at top and bottom of the panels, in the top one of which is the keyhole, are called " rails." These are often carved, the stiles generally being left plain, or ornamented only with a slight moulding.

There are many chests like Figure 149 scattered over the country. This one is a pick-up near Rochester, New York, within a couple of years. It is of oak, — old English oak at that, — dark, solid, and heavy, so that the boards which make the bottom seem almost like iron. It is a joined chest. The nails which you see on the stiles were put there recently to prevent the chest from positively dropping apart from age. The date of this piece is between 1675-1700.

Another pattern of carving which was often used early in the seventeenth century was the design called "linen fold." It can be seen on the chest in Figure 150. This pattern was in use as early as 1480, and Mr. Robinson, in his work on "English Furniture," asserts that it was brought from France. It was at first very angular in treatment, but it became more and more flowing, and had, in the later years of its use, gouged work in addition. The pattern, although in vogue till the middle of the seventeenth century, was seen at its best only during a period of about eighty or a hun dred years after its introduction. This chest has also a panelled top, as well as panelled sides, the panels being set in with a moulding instead of a bevelled edge, showing that this chest belongs to the first half of the seventeenth century. It is a fact that no two of these old hand-made chests resemble each other. They have slight differences as to dimensions, and marked ones as to decoration. It is all the more pleasing to be obliged to study closely before we can date our specimen, and it is usually safer to assign it to a century than to a more precise date.

While oak and pine were the woods ordinarily used for chests, olive-wood was rarely chosen, and sometimes cedar and cypress. The English-made chest was com monly of oak throughout, like this one, but when we came to build them — and we started cabinet-making1 as early as 1622 — we used pine for the parts that did not show, like back, sides, bottom, and often lid.

In Flanders many fronts of chests were elaborately carved and then sent to England to be fitted with the other parts. When the burghers were comfortably settled here and growing rich in the fur trade, they sent home for chests in which to store their goods, and many a rich " Kas " came in their low-lying, broad- hulked vessels.

The fronts of these Flanders chests were often carved in high relief with figures, heads, animals, or even lettering woven into a pattern, and were very hand some. They are by no means so rare in this country as might be supposed; and in many cases the carved fronts have been removed from the chests and used for other purposes, as, for instance, setting in a mantel front, or in a panel, where they show to better advantage than in a chest. 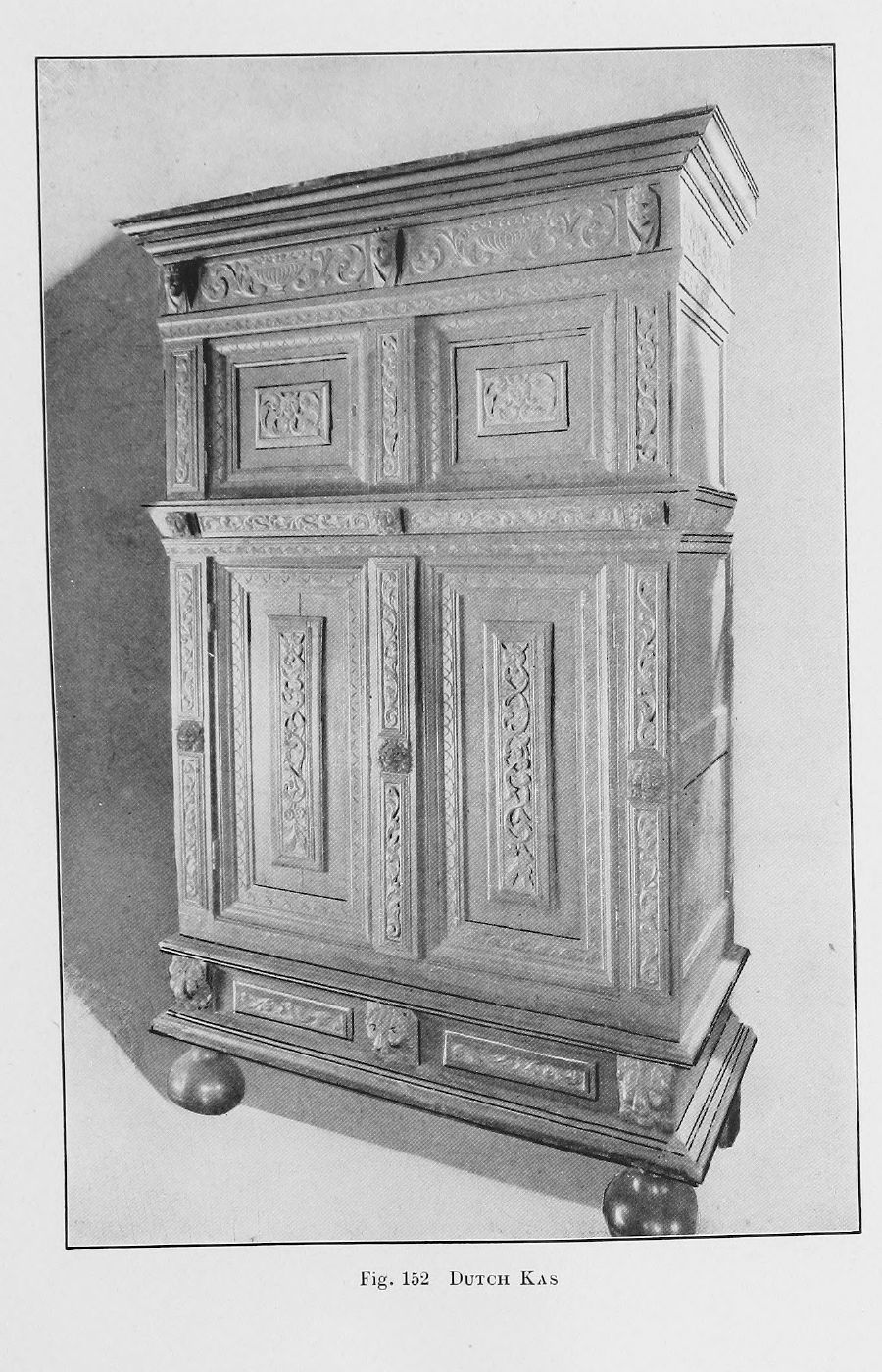 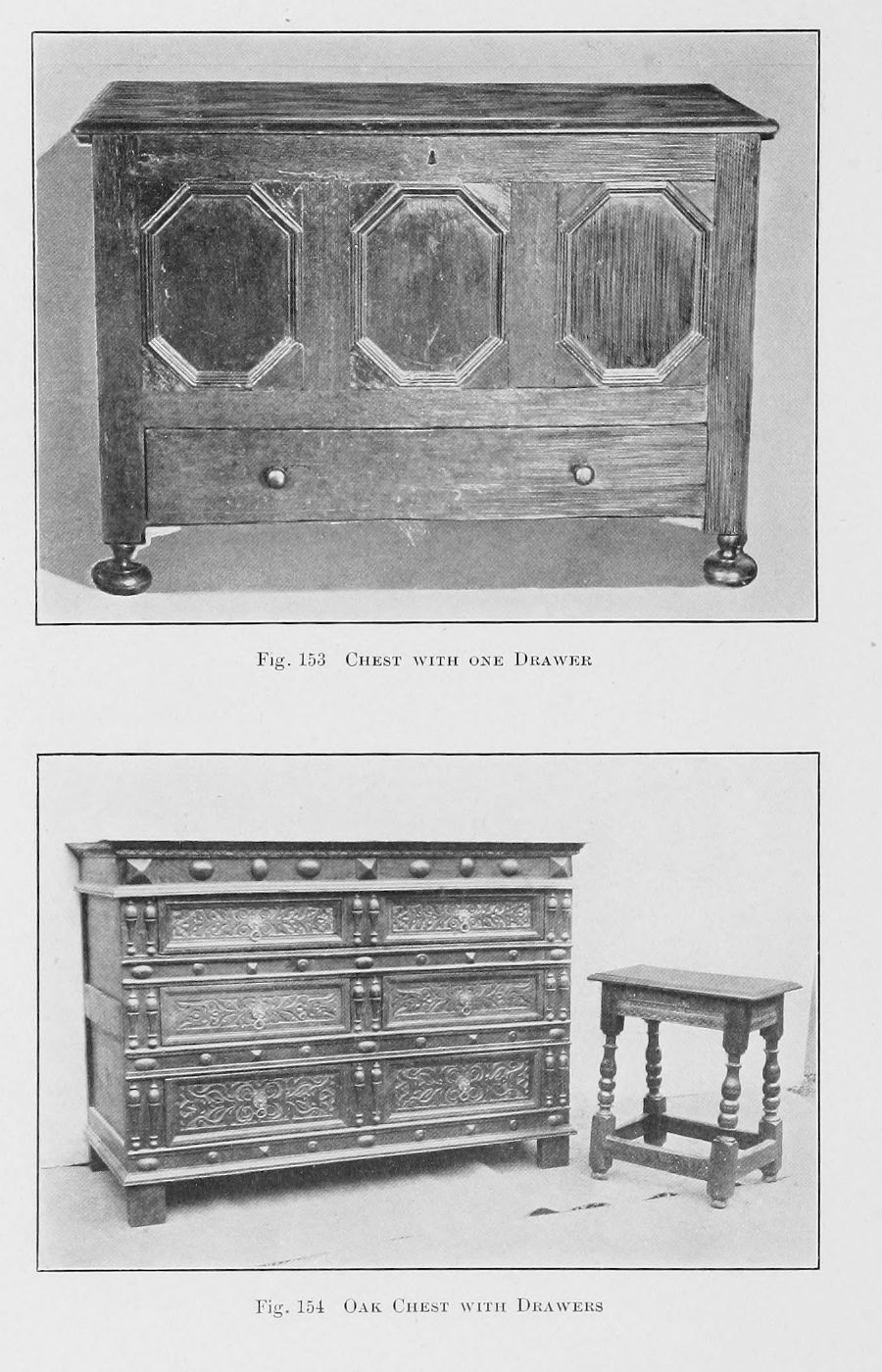