Besides those that were carved there were others on which the ornamentation was of mouldings broadly splayed and bold in design, to which were added the turned drops of stained pear-wood, or of ebony, which were such favourites with the Dutch. Figure 151 shows a fine example of such a chest, and in addition to the two splayed panels, has a round arch for ornament in the centre.

Could anything be finer than the Dutch Kas shown in Figure 152? The date of this chest is approximately the same as that shown in Figure 149, but it is a very elegant article of its kind. There is a long drawer at the bottom; both sets of cupboards open, and there are shelves within. It must have taken the good atouw and her daughter many years to grow the flax, hatchel, bleach, and spin the thread, and then weave it into linen cloth that must be bleached again many times before it came to the required whiteness which every good Dutch housewife considered necessary in her "Hollands."

The ball feet seen on this Kas were a Dutch design, copied both by the English and by us. Many plain chests are found in America with these ball feet like the one in Figure 153. This piece shows the first step in the evolution of the chest, for a drawer is added. Dr. Lyon says, in his book on "Colonial Furniture," that the first mention made of a one-drawer chest is in the inventory of the goods of the Rev. Nathaniel Rogers, of Ipswich, Massachusetts, dated August, 1655. The value was given as sixteen shillings.

With the appearance of drawers, mouldings, such as were popular for wainscots on walls, were more freely used, and such chests were called" There were other methods of ornamentation which gradually came in fashion as the chests mounted up ward by the addition "of drawers." Among these were what are called nail-head bosses, and for these, as well as for a fretwork which was seldom more than an eighth or a quarter of an inch in thickness and was applied to the drawers, we are indebted to the Dutch. Such bosses can be seen on the chest of drawers given in Figure 154, where they are used in connection with both round and pear-shaped ornaments. These nail- heads are in this case distinctly for use, since they are but the tops of wooden pegs which answer the pur pose of locking the drawers by turning a bolt. Few are so useful as these, however.

In Figure 155 is another style of chest, also of oak, but with splayed panels inlaid with bone and mother-of-pearl. Although this piece is dated 1541, it is probable that it was made somewhat later, since this style of ornament was made till as late as 1650. The handles point to the latter date also, and the chest does not need the added century to make it both interesting and beautiful. There is always a tendency to call such pieces as this Italian, but there is nothing about it which could not have been done in England, and it is knovra that inlaid furniture was made there at about this period. 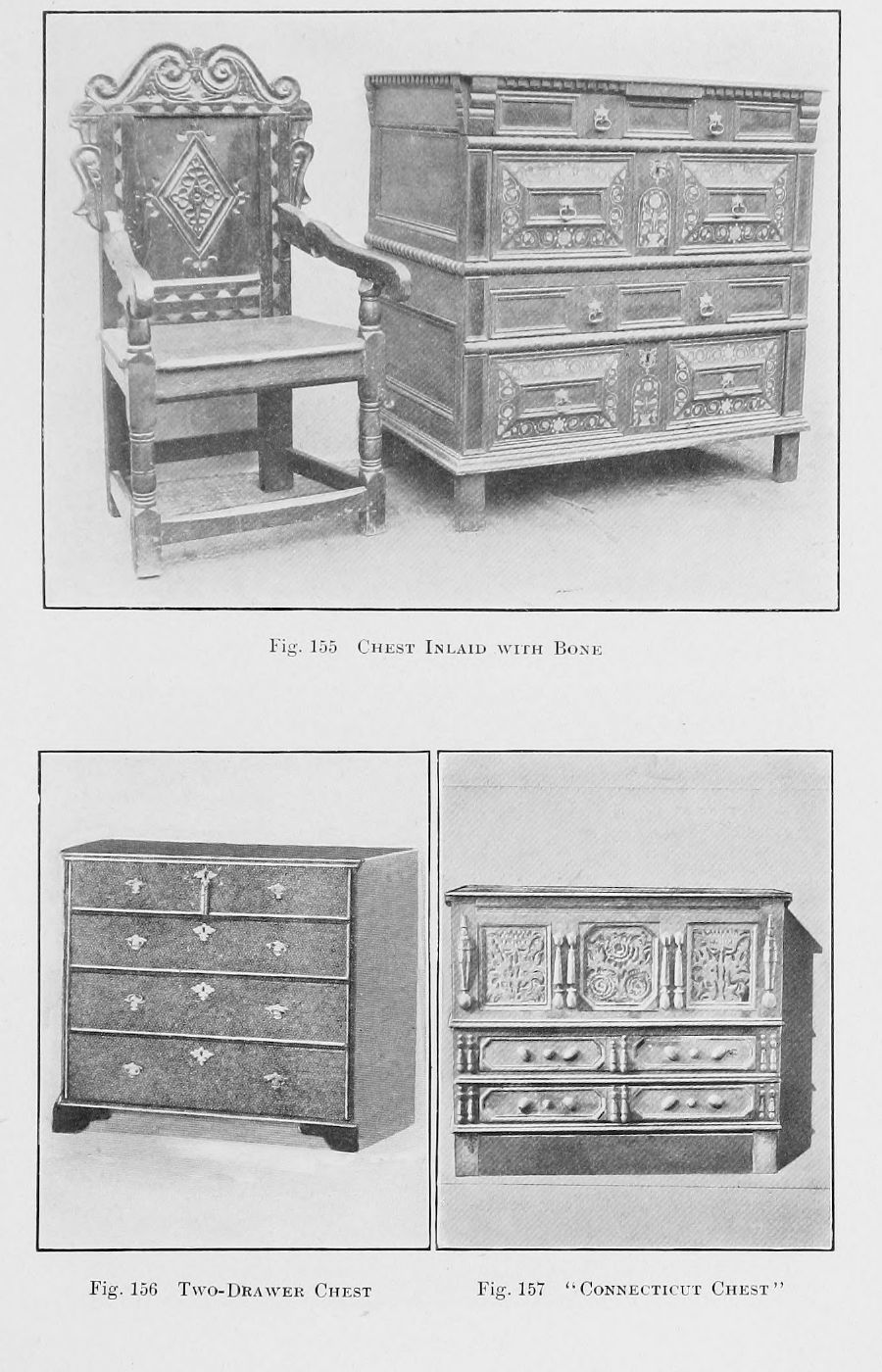 The proportions of the early chests without drawers were about sixty inches long by twenty-four high. As the chests rose in height they decreased in length, so that they should not become too bulky.

The chests were almost always fitted with tills, either one or two, so that small articles could be conveniently stowed away.

The old inventories filed with wills are mines of in formation regarding the belongings of our ancestors. I have read scores of them, and there is always a pathetic side to these musty old yellow papers, the Owners usually had so few possessions. Leather breeches "half wore out," appears many times; "old quilts "; feather-beds, "not new," is another item, and in the earlier documents things are sometimes described as " damnified."

Sarah Oort, a rich and many-times-married widow, had at the time of her third marriage many elegant goods. Among them were three "chests of drawers," as chests with drawers began to be called. This was at

"One fine chest of drawers, of maple (1703), is an item in another inventory, probably made of native wood by one of our own cabinet-makers.

By 1724 walnut, cherry, maple, poplar, hickory, pine, and ash were all being used, and in the larger centres comfort was by no means lacking. The pioneer, how ever, still clung to his " Kist," since he could use it both by day and night, and hide within it his few valuables.

In a number of inventories in the early years of the nineteenth century I find mention of chests, showing how long they continued to be used. Lieutenant Ozias Cone, of Canandaigua, New York, had two in 1805. He valued them at a dollar each.

Dr. Samuel Dungan, of the same place, whose in ventory was filed May 14, 1818,"had many posses chest," sions; among them was one large pine" valued at twenty-five cents. He also specifies a lot of bones, five dollars ! Could this have been the family skeleton?

Of course, our cabinet-makers made just such furniture as they had been accustomed to make " in the old country." It was only in occasional instances that one branched out for himself. Figure 156 shows such an example, for though it is apparently a small bureau, it is in reality a two-drawer chest. What appears to be two small upper drawers and the long one below them are but mouldings fastened on the front of the chest, which takes up the whole upper half of the piece.

This is a very old piece; the handles are of an early variety of the willow pattern, and fastened in with wires. It is the only piece of the kind I have ever seen, and is interesting in every way.

There are other chests, made by one man and his assistants, it is most probable, which occupy a place quite by themselves; and it is well to describe these chests before we pass on to the final steps in the growth of the chest.

In Figure 157 is given what is knowi to collectors as the " Connecticut from the fact that so many of this pattern have been found in that State, — about fifty in all. It is a two-drawer chest of elaborate de sign, the turned ornaments being stained black, and the patterns on the panels carved in Ioav relief, the two end ones showing conventionalised tulips and the centre a sunflower.

Many of these chests are built on the American plan, with pine tops, bottoms, and backs; but this chest, which is in Memorial Hall, Deerfield, Massachusetts, has a top of oak like the front and sides. It is forty inches high, forty-eightinches long, and twenty-two inches in breadth. The same style of decoration has been found on chests with but one drawer, which prob ably emanated from the same workshop. The date assigned to this chest is from 1675-1690, the shape of the mouldings and turned ornaments dating from about that period.

The owner of this chest is Dr. A. M. Kenney, of Boston, Massachusetts. His father has written to me concerning it, and starts a new theory regarding it. He says: "This chest was brought to Greenfield, Mass., by my great grandmother, and had belonged to her mother and probably another generation preceding.