I am in receipt of a letter from a lady in Cleveland, Ohio, who owns one like it, who desires to know where they were made, saying also that tradition makes it to have been made in Scotland, and brought to America about 1700. My father in 1843 was a warrant officer in the U. S. Navy, and while stationed in Rio de Janeiro, Brazil, visited a disused convent in that city, in each cell of which was an oak chest, nearly if not quite like this one."

No doubt the American maker copied a chest which he had brought from England, or perhaps made his own plans from memory of what he had made in the old country, so that there was a strong resemblance between those of domestic and those of foreign make.

There is still another style of chest belonging to a special locality, quite different from the one already shown. In Figure 158youmay see the "Hadley so called because they are found in. and near the town of Hadley. While made of oak, these chests are still further ornamented by being gaily painted or stained. As they were Ioioaati as " dower chests," no doubt an effort made to have them unusually hand was some on the bride's account. Like the Connecticut chests, the Hadley ones are allways of exactly the same pattern, the middle panel being carved with the initials of the Owner. The " S. H." seen in Figure 158 stood for Sarah Hawks, aaIio was married in 1726.

The Ioav relief carving extends OATer the whole chest, the caiwed part being stained red, and the natural colour of the oak forming a background. The front only is carved, the sides being panelled. Looking on this old chest, which is also at Deerfield, one can imagine how proud the bride must have been who Owned one. Hoav she must have toiled to fill one ever so scantily with linen and woollen cloth, and some bits of "5 -muslin," — which was the desire of every woman, — to be made in caps and kerchiefs!

Not far away from this chest is the door of one of the early Deerfield homes, driven full of huge spikes to repel the attacks of " ye barbarous enemy," aaIio, even so, managed to cleave the door with their mur derous tomahawks.

The owner of this chest into dust years has mouldered and years ago, yet youmay lay your hand on her "dower chest " and conjure up before your mind her satisfaction in her hopes it, and fears as she filled it and carried it with her into her new home.

After the three-drawer chests, of which this is such an interesting example, the next step in the upward flight of the chest was a marked one. They began now to be mounted on legs of turned wood, ber, four in front and two behind, connected by curved stretchers. The one shown in Figure 159 is an early specimen, made probably about 1700-1710, of walnut veneered with walnut and having the early drop-handles. Two very good indications of the age of a piece of furniture are the handles and mouldings, while the feet, as a general rule, point more to its nationality.

The drop-handles on this chest are solid, but the drops also come hollowed out at the back and indicate an earlier period. These are fastened into the drawer by a piece of wire which is twisted together on the inside. The plate through which the handle passes may be round, or diamond-shaped, or in curves, and while sometimes cut, it is more often stamped out. This is an early style of handle.

The first mouldings used to surround the drawers are quite plain; they became double after a little while, and sometimes, when used to form the top or cornice, quite heavy. The very earliest specimens of these chests on frames had but one drawer, instead of three, at the bottom, and the lower edge was in a single curve instead of a triple one.

Little by little numerous changes were wrought in these chests on frames, and the straight turned leg disappeared. Then presently two legs were dropped, and then the curved stretchers.

The places of the two missing legs in many standing chests, as they are sometimes called, is to be seen sup plied by a drop ornament of a more or less ornamental character. Occasionally the place is finished off square with a little moulding.

The cabriole, or bandy-leg, became popular, and was finished either with the plain Dutch foot or with the ball and claw.

An example of the early bandy-legged high-boy of Flemish make is given in Figure 160. Although it has not very graceful proportions, it is rendered most or namental by its beautiful floral marquetry, showing tulips, carnations, and passion-flowers in different col oured woods in a mahogany ground. By 1700 the im portations of foreign woods had given an impetus to what was called " smooth-faced " furniture, — that is, what was inlaid, veneered, or enriched with marquetry, — in distinction to furniture where the decoration protruded from the surface, as in carved or panelled work. 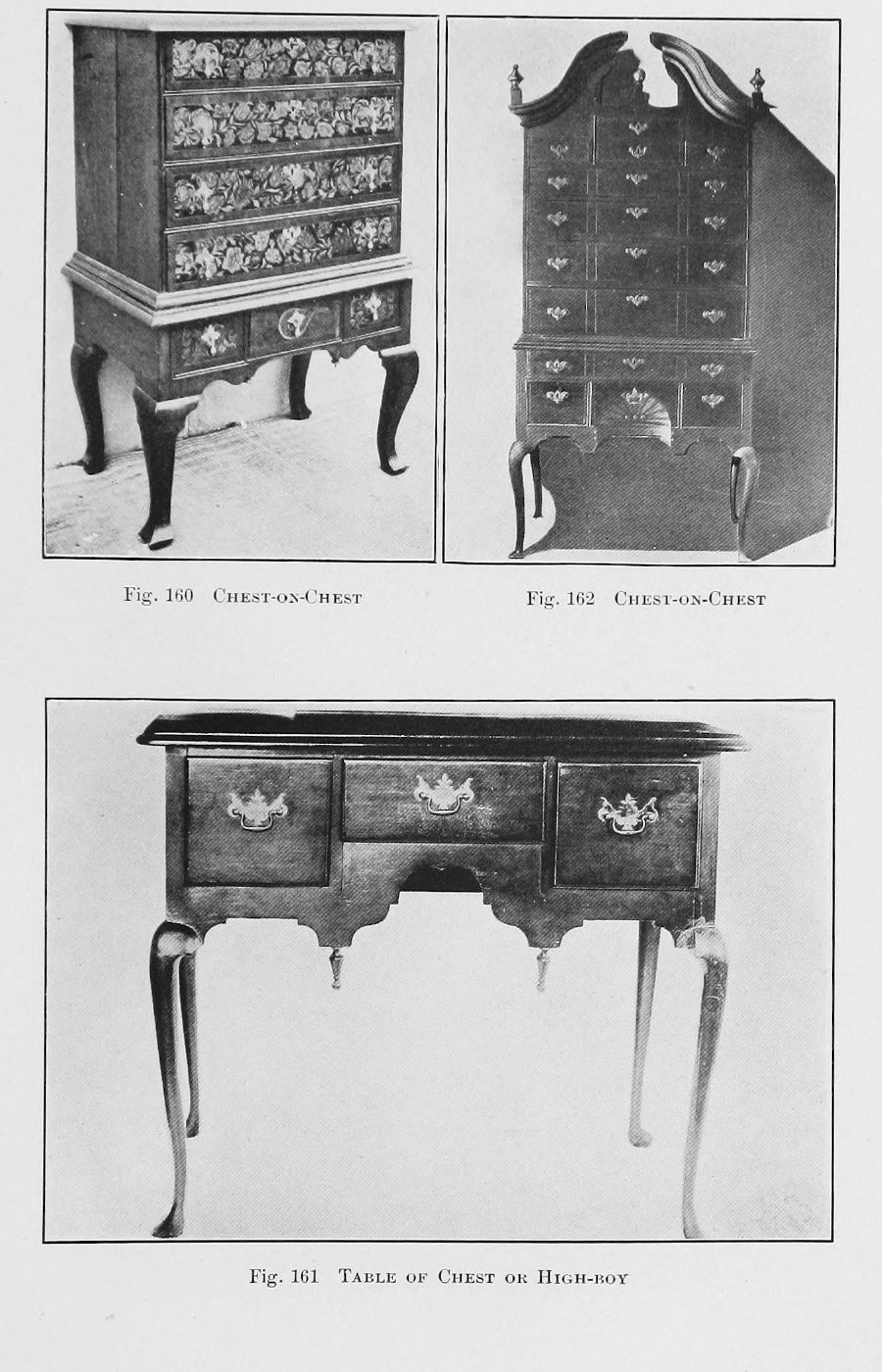 What veneering is we all know, — the covering of an inferior wood with thin strips of a choicer kind, so that the whole base is concealed. Inlay is an enriching with wood of another colour, or with metals, stones, bone, ivory, mother-of-pearl, tortoise-shell, or anything that could be utilised by the skilful worker.

The line of demarkation between marquetry and inlay is not very sharply drawi, but marquetry is apt to cover entirely the baser wood, the decorative arrangement being used in what is called " reserves." In few pieces is the marquetry so large and the ground so small as in our example in Figure 160. As may be noted, the ground forms just a frame for the marquetry on the drawers, while the usual rule was to have, say, two reserves on a drawer, each of them oval or round in shape, and allowing a large portion of the ground wood to show. Where you find a tulip entering into the decoration of a piece of furniture, you may generally ascribe it to the Dutch, particularly if the ornamentation is conceived in a free and flowing pattern.

As will be seen from the examples, nearly all these later pieces which we call " high-boys " were really chest-on-chest of drawers, or chest on tables. Some times these twO pieces of furniture became separated, and the lower part, if in table form, was called a dressing-table, and used for that purpose. derelict is shown in Figure 161, and must have been a part of a very stately piece of furniture. The ages of these chests and high-boys can be roughly guessed by the drawers.

First came those which had heavy splayed mouldings, with applied ornaments of turned drops and beadings. The framework around the drawers was beaded or moulded. Second were the oak or walnut pieces, veneered or not, with plain drawers and double beaded frame. Third came the moulded drawers with plain frames; and last were the drawers which were moulded but not projecting, the edge of the drawer lapping over the frame so that the opening did not show.

At first the tops of the high-boys were flat, finished with a small, plain moulding. By degrees this moulding grew heavier, and was sometimes wide enough to carry a long drawer; then it rose into a curve, and the "broken arch" top was put on choice pieces made of mahogany or cherry. At the ends of the cornice and in the middle were placed ornaments of either brass or turned wood, urns, flames, or points, according to the taste of the maker; and now the simple " trussing-coffer " of the fourteenth century reached its highest expression in the " chest-on-chest " of the eighteenth century.

Figure 162 gives a very beautiful example of a mahogany chest-on-chest, which is a highly prized or nament of a Vermont home. It has its original brasses and top ornaments, the handle brasses being beautifully engraved. This chest-on-chest has a line of inlay about the drawers, and the shell carved in the lower drawer is done in a piece of solid wood and is very handsome.

Our cabinet-makers seldom indulged in very much inlaid work; a line of whitewood, holly, or satin wood usually contented them; or in some cases a double line of whitewood and ebony was sparingly used. They did use carving more freely, and these old pieces have a look of solidity and a certain irregularity which is often found in handwork when the maker did not give any too great attention to accuracy of measurement. There is an old oak cupboard of the seventeenth century in the rooms of the Antiquarian Society at Concord, which is infinitely pleasing in form. This has been copied within recent years by first-class cabinet-makers, also used the greatest care in their work, and the reproduc- tions, while following in shape and colour the hardy old original, have lost the very thing which gives it half its charm.