The cupboard at Concord is very similar to the one in Figure 163, and is really that piece of furniture of" which we often read and seldom see, called a court cupboard." The old-time mentions of it always refer to it as being set out with the store of plate, beakers, tankards, etc., which its Owier possessed. In Harri son's " Description of England," which has been quoted before, the mention is made of the farmer having pewter "on his cupboard." In many inventories references are made to cupboards of various styles, — such as wainscot, hVery, court, joined, press, and what is vari- ously known as a butter cupboard, or a trencher-bread cupboard. Such a one is given in Figure 164, which is in shape a court cupboard, but has the holes bored in one of the divisions so that the air may enter and keep the food within pure and Sweet. Trencher bread was a very important article in the household in Eliza bethan times and was generally called " manchet." It was made of wheat, and Harrison, in his " Description of England," says: 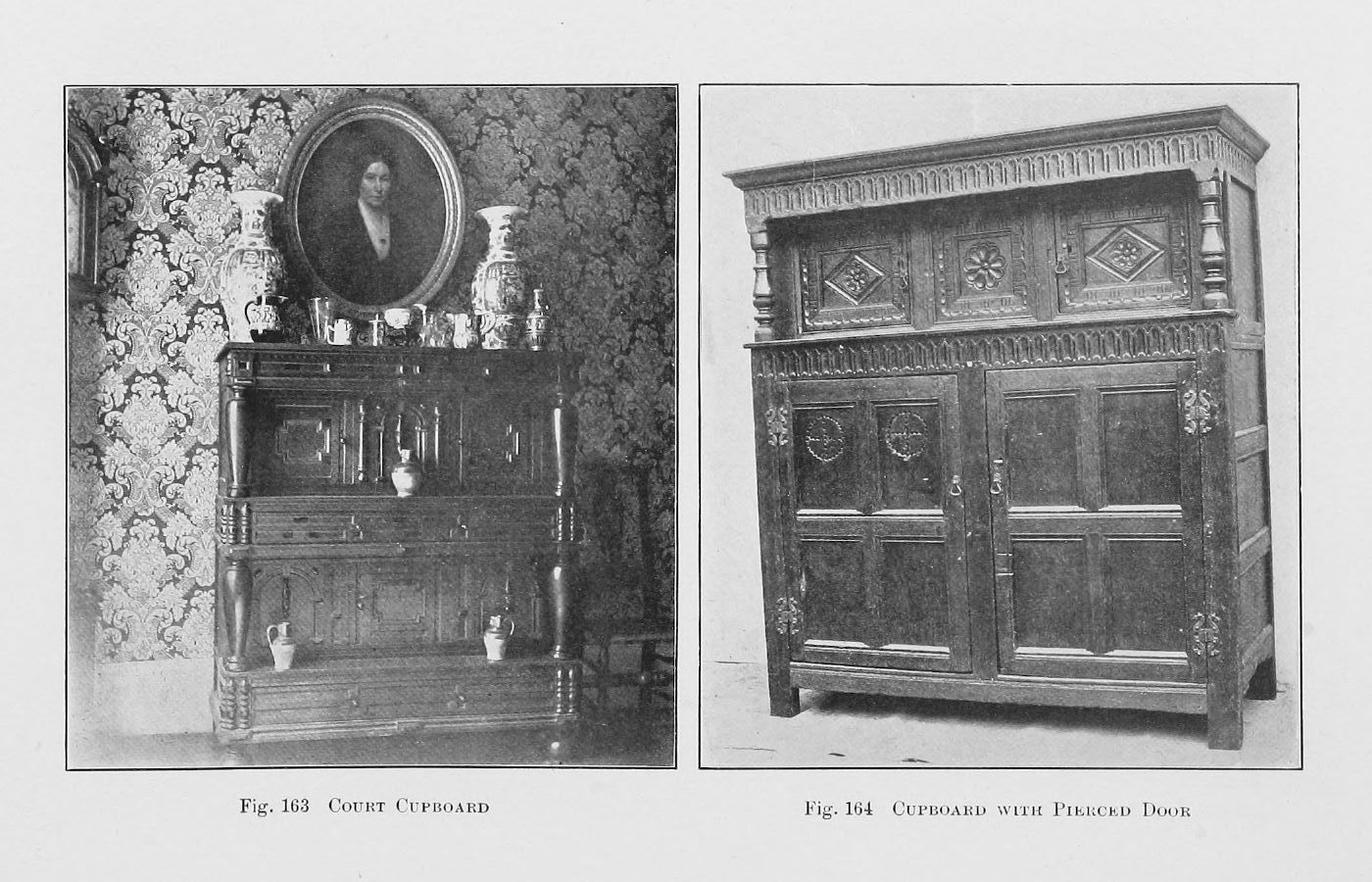 "Of bread of wheat we have sundry sorts daily brought to the table, whereof the first and most excellent is the manchet, which we commonly call white bread, in Latin, primarius panis; and our good workmen deliver commonly such proportion that of the flour of one bushel with another they make forty cast of manchet, of which every loaf weigheth eight ounces into the oven, and six ounces out."

It was to keep the trencher bread dry that the cup board was pierced. This cupboard is a fine one, — of oak, with some good carving upon it, and the original hinges. Upon the shelf in front of the upper doors was room for a toav of plate or pewter, and even on the top beakers and jugs which were not in common use could be displayed.

The livery cupboard was really a"set of shelves with out doors. Mr. Litchfield, in his History of Furni ture," quotes from a record in the British Museum for joiners' Hengrave about some work which was done at 1518, in which livery cupboards are specified. Ye cobards they be made ye facyon of livery y wthout doors."

Two very splendid cupboards are given in other Figures 165 and 166, the former covered with a beautiful fretwork. This piece dates to about 1630 and has still the ornate hinges and clumsy handles with which started. It is of oak, and the handles and hinges are of iron, as they should be. The last cupboard or cabinet (it can be called by either name) is handsome of its kind, but belongs to the seventeenth century. It of oak, is and belongs to the Water's collection of Salem, Massachusetts. The built-in cupboards are often charming, but are generally the work of the carpenter rather than the cabinet-maker. They were made either with doors or without, and the choicest which can be found in this country are those which have a great shell forming a concave top. In many of the old houses cupboards such as these still can be found, often incorporated with the wainscot, and I have seen particularly choice ones in Deerfield, Massachusetts, as well as in Concord, and at Salem in the same State. 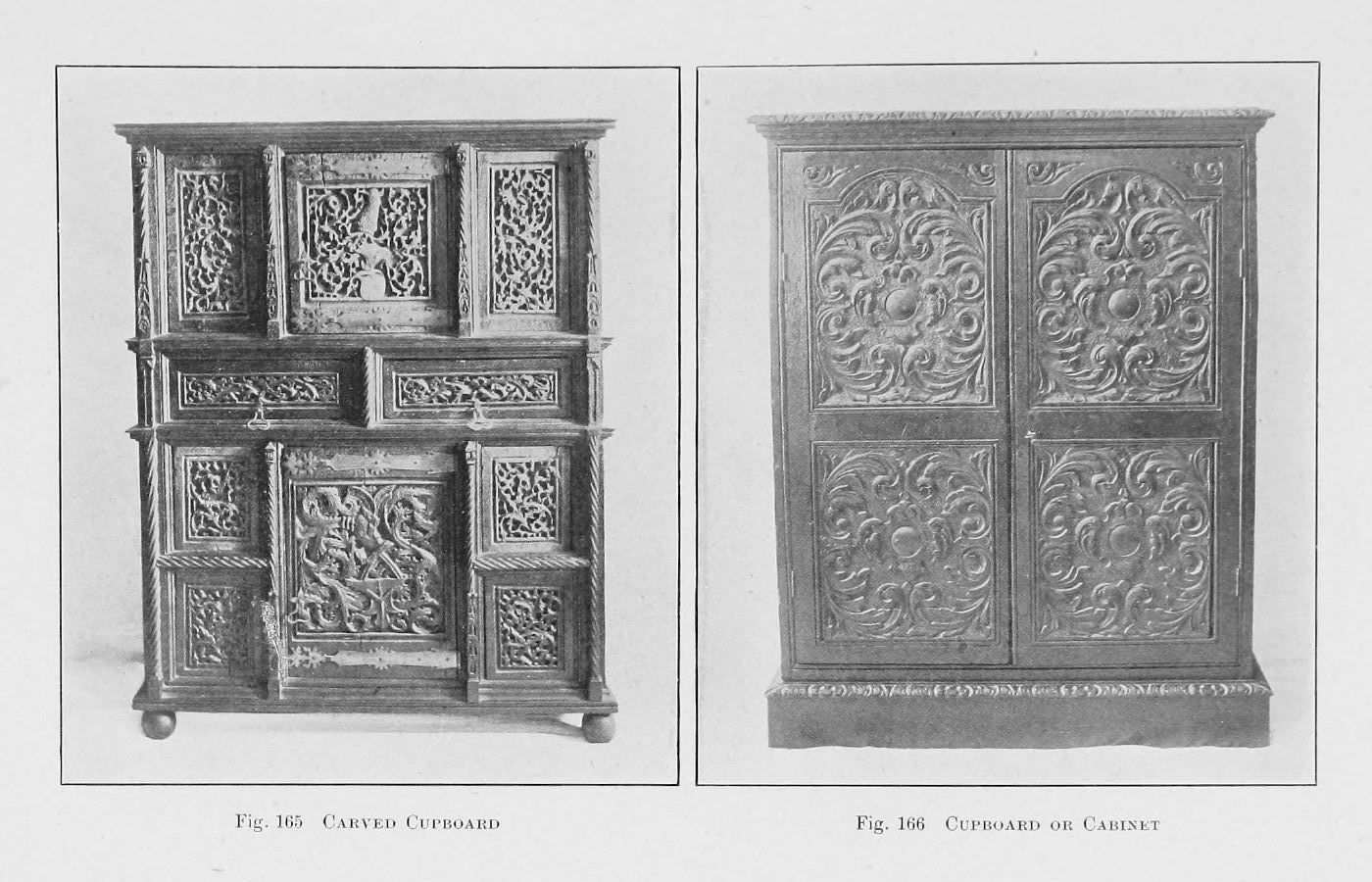