"The Flight into Egypt " was a great favourite. One example of it is given in Figure 323, top row at the right. Pray observe the rotundity of the figure of Joseph, and the abundant cut of his trousers! The English potter was nothing if not fanciful in his por trayals. Falstaff was another popular figure. He is in this same figure opposite " The Flight," and below him on the left is one of those classical figures so much in demand during the last years of the eighteenth and opening decades of the nineteenth centuries. The central group at the bottom of this picture is not Staf fordshire properly, but Bristol, and exceedingly charm ing and dainty it is. High class figures were often copied in Stafford shire. Compare the Falstaff in Figure 324 with the one just seen. The latter is Crown-Derby, and worth in pounds what the other is in pence. This is but one of the many instances to be found. In this same pic ture the middle figure is a well-known old one, called 'The Hunter." It is one of a pair, is hollow and marked ! Walton," one of the eighteenth century makers, who was known for his excellent work. The third figure is also charming. " Andromache weeping Over the ashes of Hector." This subject was treated by the works at Leeds as well as by the Crown-Derby por celain works. All these three pieces are exceptionally fine as might be expected, for they belong in Salem, Massachusetts, that repository for so much that is rich and rare. 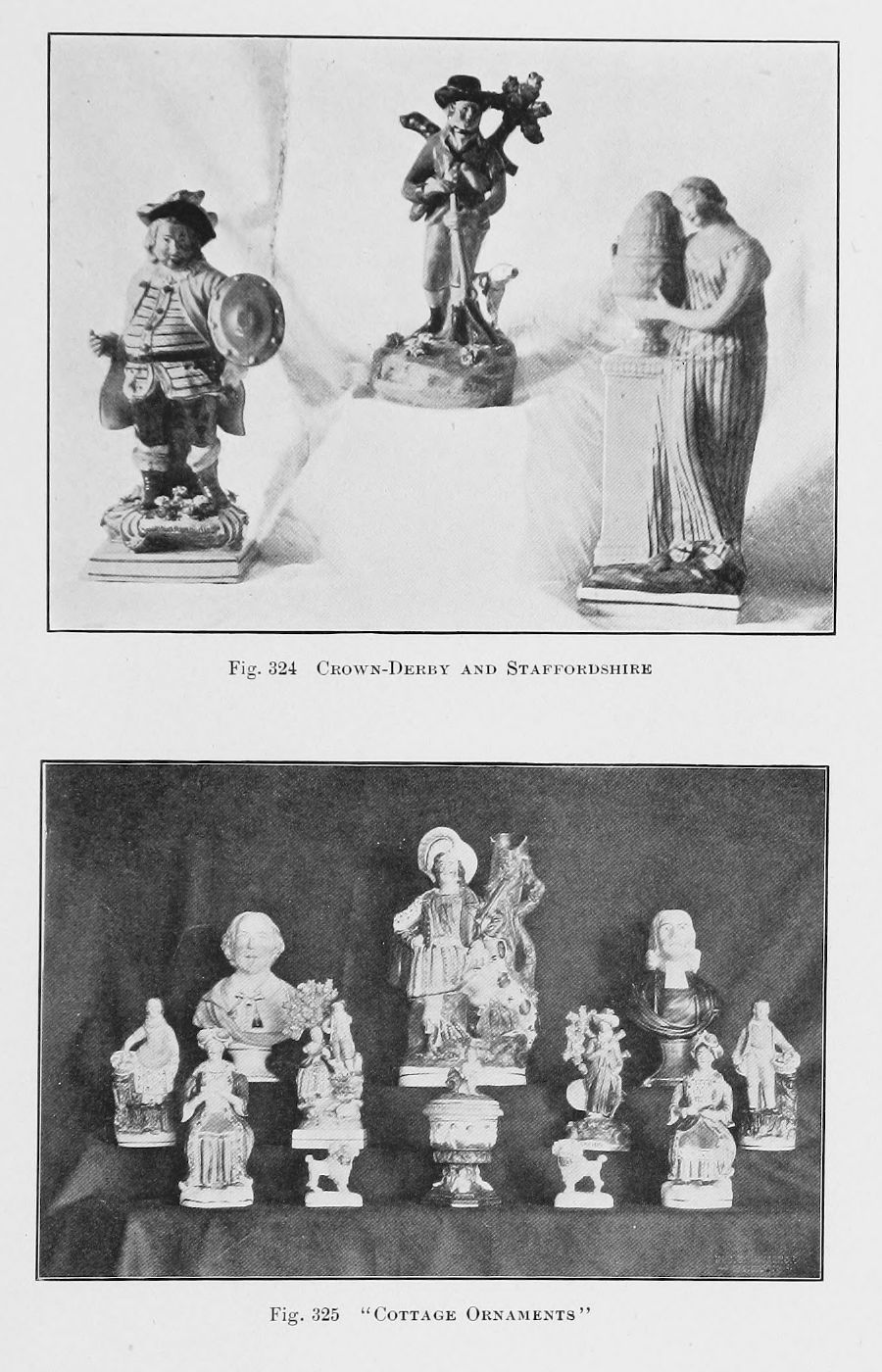 In Figure 325 are a number of subjects, and two of the portrait busts. The large figure in the centre was for a bunch of flowers or dried grasses, and there were many double figures or single ones for this purpose. I have a group of two seated in a bower with the vase part between them. They are not very choice since they lack colour, but a nice dog makes part of the group.

A double figure group is shown in Figure 326, charm ing in colour, and it is too bad that his hat is chipped off, for otherwise the figures are perfect. In Figure 325 may be seen two figures with tree-like backgrounds. This class of specimen is called " boskies," from the French term bocage. Such backgrounds are more com mon among the porcelain and china figures from the high class potteries than among the Staffordshire ones. Few figures with them can now be found in a perfect condition, for these twigs and sprays are so fragile that thej' were easily broken, as were the swords and spears with which so many of the figures were armed. Both of the Falstaff s had Swords originally in the right hand. 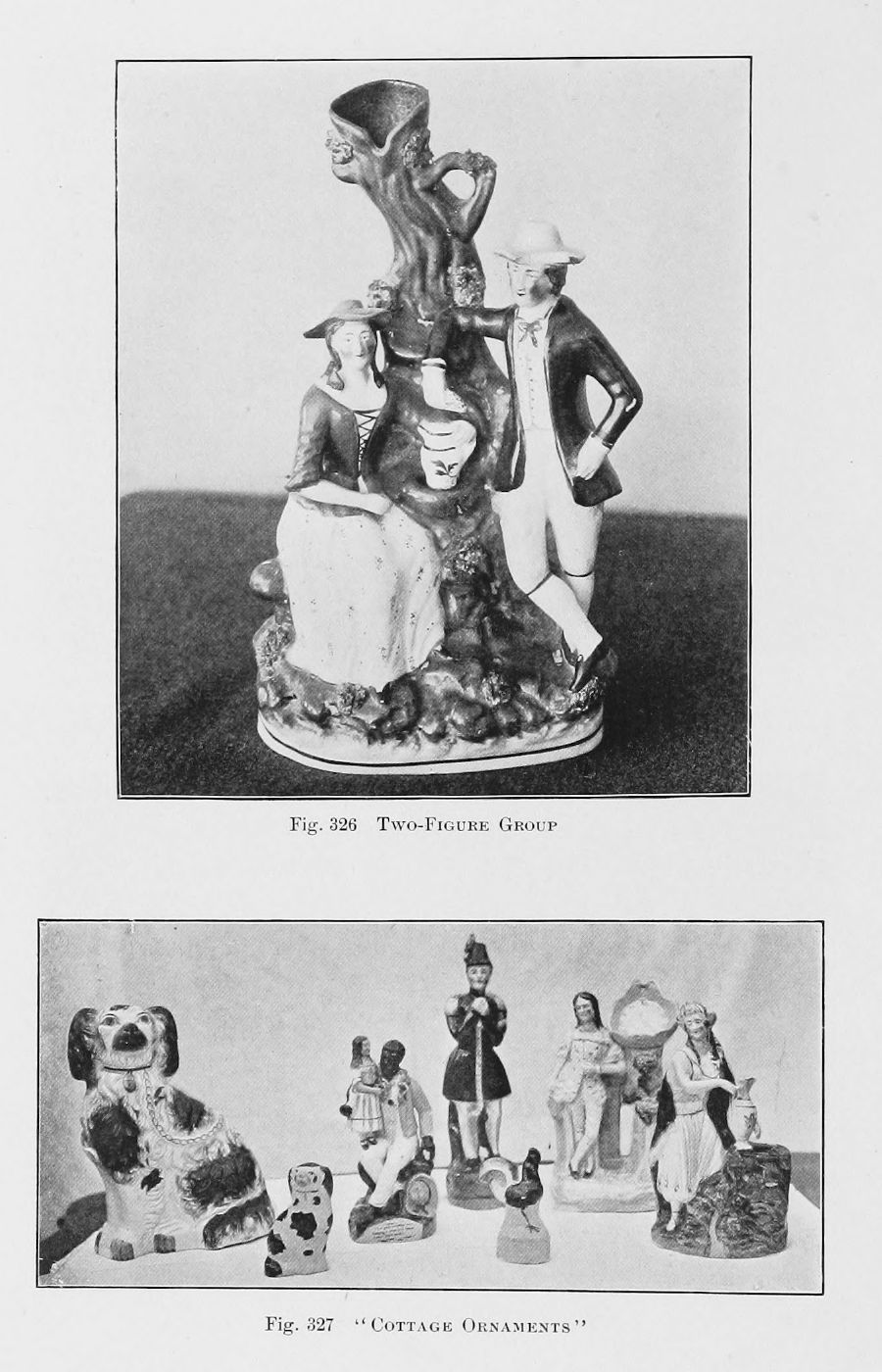 In the next Figure (327) is sbxm-n a miscellaneous group of figures, the soldier in the centre being the oldest and best. The watch-holder to the right is now mine, and is marked on the base " Milton." Imagine that poet in a sprigged matinee dictating Paradise"Lost " to his weary daughters! The next best piece in this group is the rooster. He is old and good, and this bird has al- ways been a favourite with the potters. Next in order of value and interest are the dogs, and the collecting of these animals alone occupies the attention of many dis tinguished collectors, some of them choosing only what is known as the " spotted dog." One collection already numbers two hundred and fifty pieces, each one differ ent. The dogs shown in Figure 327 are to my taste the least interesting of all the varieties. In the next picture, Figure 328, are shown two of my Own which are spirited and fine. The spotted one is by far the elder, and is per fect with the exception of a crack near the base. He is of bone paste, light and soft, and every time I look at him, particularly if it be near the full of the moon, I expect to hear him howl. He looks all ready to bay the moon. The recumbent dog is a faAAm-coloured grey hound, a lovely creature lying on a dark-blue cushion, in which is a small opening for a pen, as he is an inkstand. There are several other patterns of greyhounds, also guardians of ink, which I hope to acquire to make my collection complete. There is also a standing one with a hare in his mouth which is very nice, and one may get at least eight different patterns of greyhounds. There are also some small Pomeranians, like those to be seen in Figure 325. Indeed, the collecting of dogs is a most im-iting field, for when you have the greyhounds all com plete, there still remain the pointers, of which there are many patterns, before you come to the spaniel, which is "dog." in reality the spotted After you have all the dogs, whole dogs, which you can get, you can then take up the faces and masks, a branch of the subject which, though difficult, is engrossing. These heads of dogs and foxes were used as whistles, or for handles to canes and hunting crops, for paper-weights, and apparently for wall ornaments as well, since some of them are to be found life size. Sir Walter Gibney has a collection of seventy-three of these, nearly all of them of Stafford shire ware, ranging from the early mottled and agate or tortoise shell wares, to those of later times, which were coloured to life. There was hardly a firm of potters, whether of porcelain or pottery, which has not turned its hand to the making of dogs. Go where you will, at Worcester, at Bow, at Battersea, where they enam elled them, at Rockingham, at Chelsea, at Burslem, they all made dogs. Go to Holland and you will find the Dutchman had his favourites too, though he will colour them blue to keep his blue cows in company; but they are attractive for all that. Even from our own potteries came dogs of many colours and sizes, but those will be mentioned later. 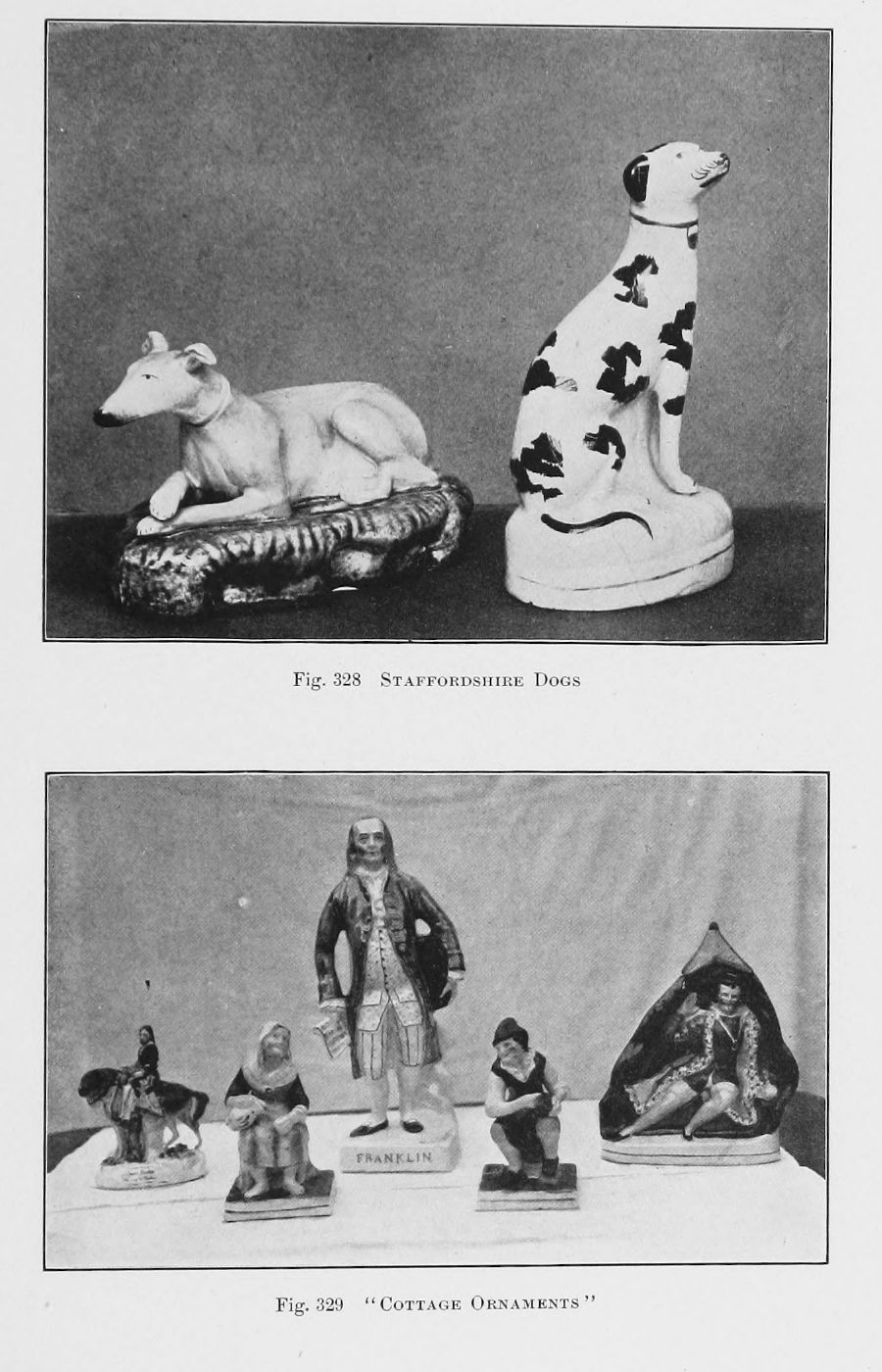 In Figure 329 of course the most eagerly sought figure is the Franklin, nine inches high. This is one of the old pieces and allways attractive. Franklin has the credit for being more often produced in porcelain and pottery than any other one person, not even Wash ington excepted. His long residence abroad, his pic turesque personality, particularly the fur cap which he was so fond of wearing, made him a welcome figure to the potters; and there is no drinking vessel too grand or too humble but that you may, perchance, find his face on the inside or out, nor was there any pottery too coarse for a statuette of him. The figures of the cobbler and his wife are well-known and good examples,

"Pasha," " * & but the Omer which also has on it Success to Turkey," and the Uncle Tom and little Eva are too modern to be very valuable.

The next group (330) is from my oaatq collection, and the figures are of varying degrees of merit. All are well coloured and most of them well modelled; but one only is old, and even that is not more than eighty years of age. This is the Cricketer, on the upper row. His head has been broken off and glued on; and when the Owner sent it to me she apologised for this defect, and also for the damaged nose, by saying that for years it had been the chief treasure in a lively family of thir teen. It seems strange that any of it survived such wear and tear. The three figures in the top row are the stars of the collection: the Cricketer on account of his age, the middle figure on account of the tragedy which led to her being perpetuated in pottery, and the seated figure on account of the story connected with my getting it. The middle figure says on its base Emily Sandford, and you might not think to look at her grim expression that she had ever had a lover. She did, however, and his name wasHenry Rush. He was the tenant of a house called Potash Farm, and his landlord was the owner of the Stanfield Estate, and lived in an imposing man sion called Stanfield Hall, which was a regular" grange." moated 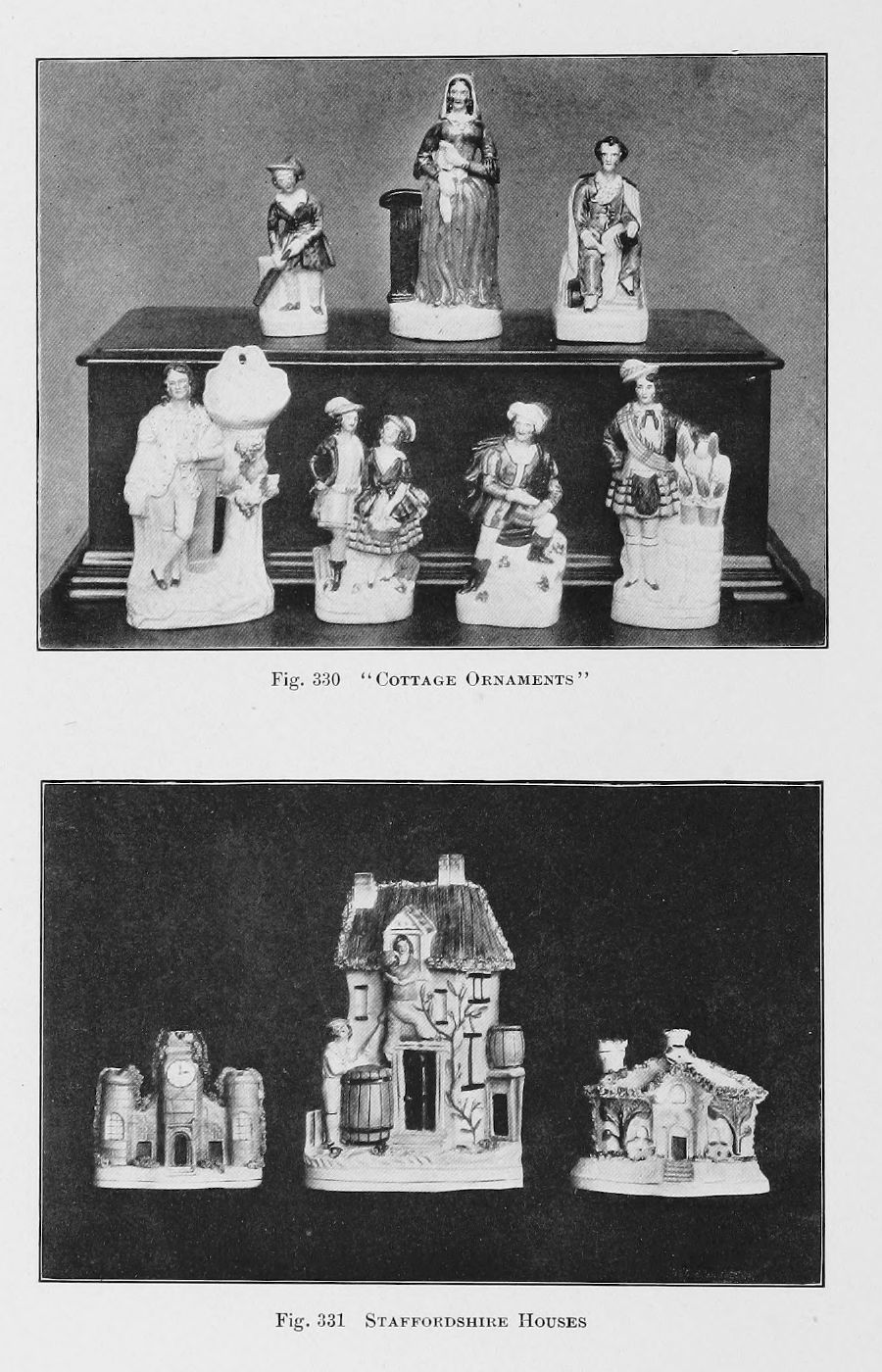