For some reason or other Rush attempted to murder his landlord, the latter's wife, and, indeed, the whole family. He did succeed in killing some of them and wounding others, and he disposed of the bodies in the moat. Emily knew all about it, and finally told the whole dreadful story; and Rush was hanged in front of Norwich Castle, his being the last public execution to take place there.

All England rang horror of these deeds, with the which took place more than fifty years ago; and seta of Staffordshire ornaments, were made, five pieces in all, consisting of Emily, Henry, Potash Farm, Stan field Hall, and Norwich Castle. These latter three pieces were of the style of ornaments, which were used to burn pastiles or scented tablets in, the perfumed smoke coming out of the chimneys in realistic style. I show some of these houses in Figure 331. The only collector who known to have anything approaching is a complete set of the Rush pieces Prince Frederick is Duleep Singh of England, who has four of the five, the Norwich Castle being wanting. In my own case, I am on the lookout for Rush himself; and when I secure him I shall be content to let the other pieces go, as the houses are bulky and not pretty in colour or form. I have never come across one of these houses in this country, though there are of course plenty of them here if one could find them. The castle with the clock is the oldest; but the middle one shows that class of ornament which appealed to peasant humour, the pitch fork being particularly in evidence. All of these three examples have little sprigs and bunches of flowers scat tered about the base, and these were also put on most of the figures. Many of them are highly coloured, and they add considerably to the gay appearance of the ornaments.

Coming almost into this branch of pottery were jugs, f such as is shown in the ollowing Figure (332) . It is easily recognised as a caricature of Napoleon, the hand over the breast and the uniform being perfectly distinc tive. It is an old and rare piece, but is in proof condi tion and shows its careful handling. 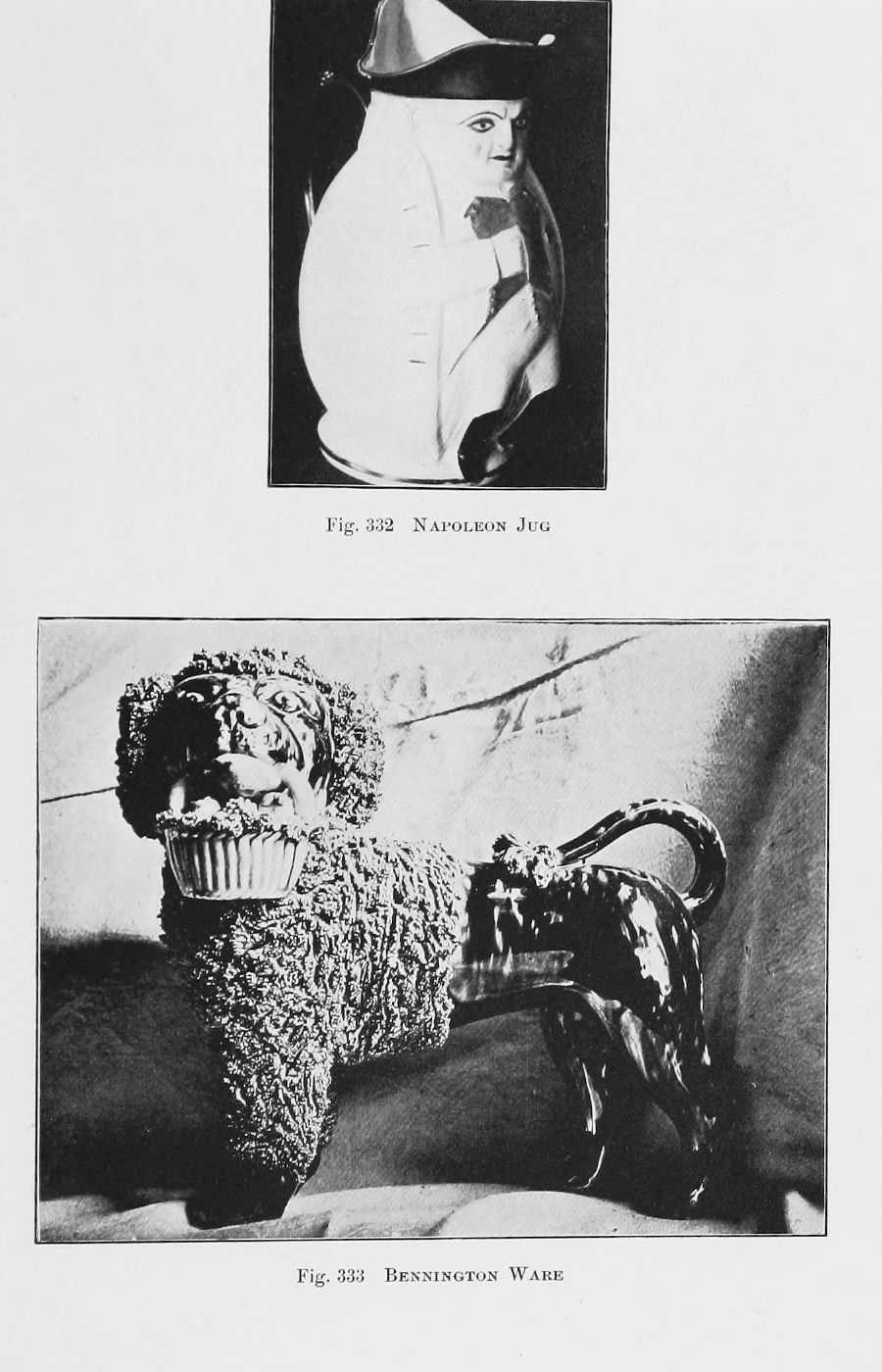 So popular were the Cottage Ornaments that more than one firm of American potters endeavoured to supply the market with such a class of articles, which they managed to sell for fifteen and twenty-five cents. The ornaments made at the Novelty Works, Benning ton, Vermont, were made from 1847 through the next ten years, and have now become so rare that they com mand extraordinary prices. They were sent about the country by means of pedlars; and while the more useful articles made in this brown mottled ware have long since been reduced to bits by hard usage, some of the orna ments, like the dog and coav shown in Figures 333 and 334, are still treasured in remote farmhouses as well as in the cabinet of the collector. The dog is an example of the best class of work produced at the Bennington works, and similar ones are also to be found in white. I saw a pair on sale in New York this last summer. They were of very heavy white pottery, and have weird blue eyes, which give them a Dutch look, and make them far less attractive than when made in the homely but rich-tinted brown ware. The cow answered for a cream jug as well as an ornament, the lid on her back admitting the milk, while a hole in the mouth was used to pour it out. 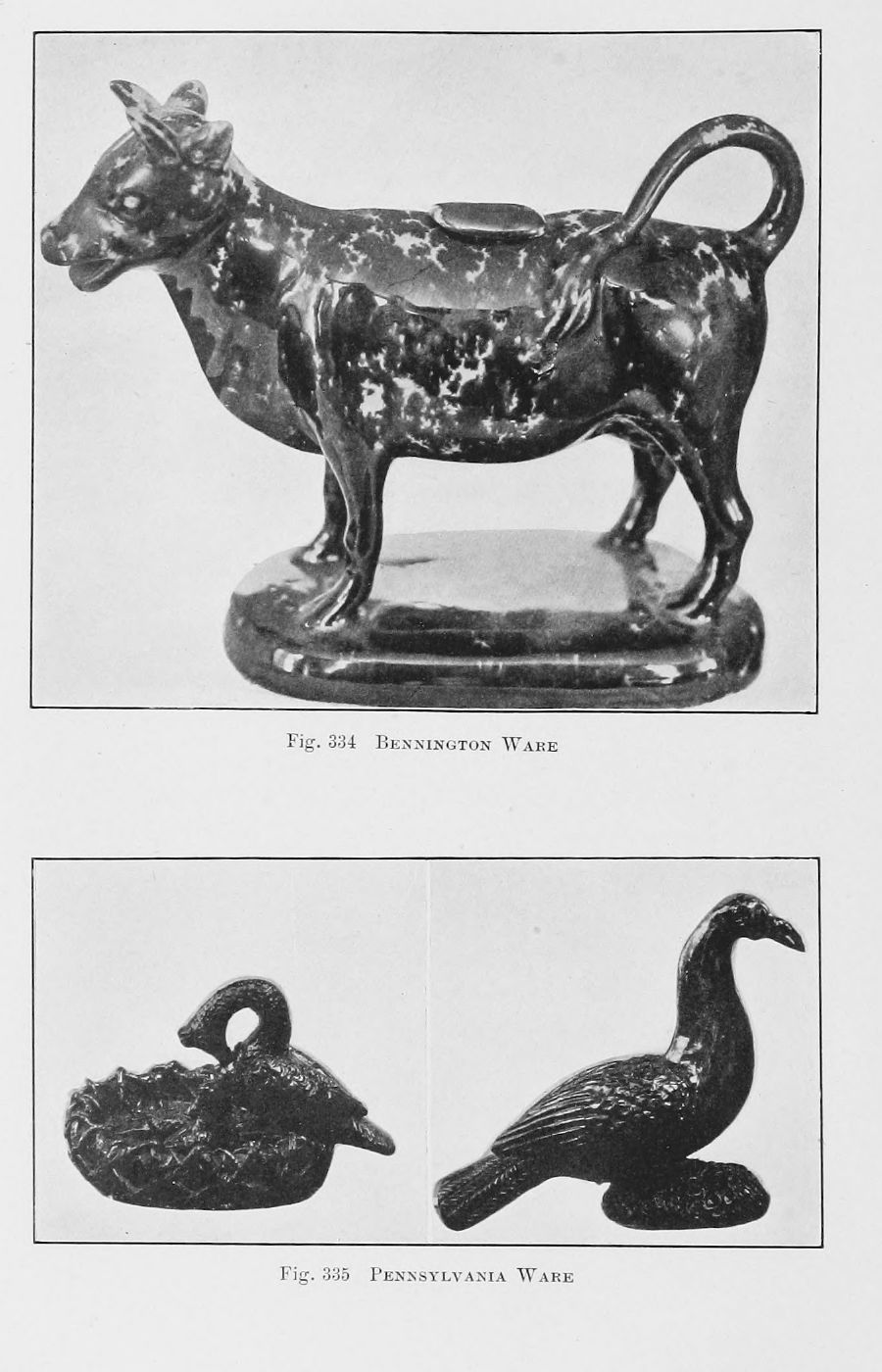 All the patterns from which these articles were made were destroyed by fire in 1873, and since that time their value has steadily increased. These little pot teries up in the mountains of Vermont acquired a wide fame, and potters came from all over the world to work in a place where each man was allowed to work out his Own ideas. The mottled ware like our two figures, to make it of value, must have stamped on it either the circular impressed mark, " Patent Enamel, or the mark which stood for United States Pottery. It is not safe to trust to your Own judgment about unmarked pieces unless you know all their previous history. Be sure also that they, are in the fine shades of brown, green, and olive which distinguished this ware from the English Rockingham.

There are two or three collectors who have made a special hobby of getting these Bennington pieces, some of them living in Vermont, where they had special opportunities of securing authentic specimens.

Tavo other ornaments, more curious than beautiful, are shown in the last Figure (335). They are the work of Pennsylvania potters about 1860, and were found near New Oxford, in that state. One of them is a bird, which might belong to any species which is fancied by the potter. avIio seldom lets fidelity to nature interfere with his idea of what is ornamental. But the other shows an eider famous from mythological times for her habit of stripping her own breast to provide down to line the nest for her young.

In many of the museums of this country there is an excellent opportunity to study the figures which were once so common; and before one embarks on the delightful pursuit of collecting them he should become familiar with the popular patterns, the colours which were generally used, and the general appearance of the ornaments.