BEFORE the invention of printing (about the last half of the fourteenth century) books of every kind — school-books, medical and cook ing receipts, as well as all public and private documents — were written by hand. The copyist was a man of importance, avIio had a lucrative employment. Even the monasteries had an office, called a " scrip torium," where missals, prayer-books, and other holy works were copied and illuminated; and from these works a substantial income was received, since no docu ment or volume was approved unless it had ornamented or decorative initials and capitals. This work was done upon tables or standing-desks attached to the wall, while in private houses there were few enough of even such conveniences.

In 1459 Margaret Paston, of Norwich, England, was having her husband's room rearranged during his absence, according to his directions. She writes to him about it, saying,

I "have taken the measure in the drawte chamber there, as ye would your coffers and your cowsatevrery (desk) should be set for the while, and there is no space beside the bed for to sett both your board and coffers there, and have space to go and sit beside."

This desk seems to have been in the nature of a table, but the conmion desk of an early period was a small box which locked and could be carried about when trav elling. We can imagine that the earliest comers to this country did not hamper themselves much by bringing even such simple affairs as these, though, in addition to their being used for writing on, they were called on as strong boxes for papers and gold, and in many cases were furnished with a till. The greatest treasure they were used to protect was a copy of the Bible, and they were often called boxes from this fact. One of these old boxes, made Bible of native oak, carved in Ioav relief in a pattern of tulips, is shown in Figure 263; the lid, which is of deal, has but a moderate slant, and the box contains a till. It is not dated, but belongs to a period between 1650 and 1675. 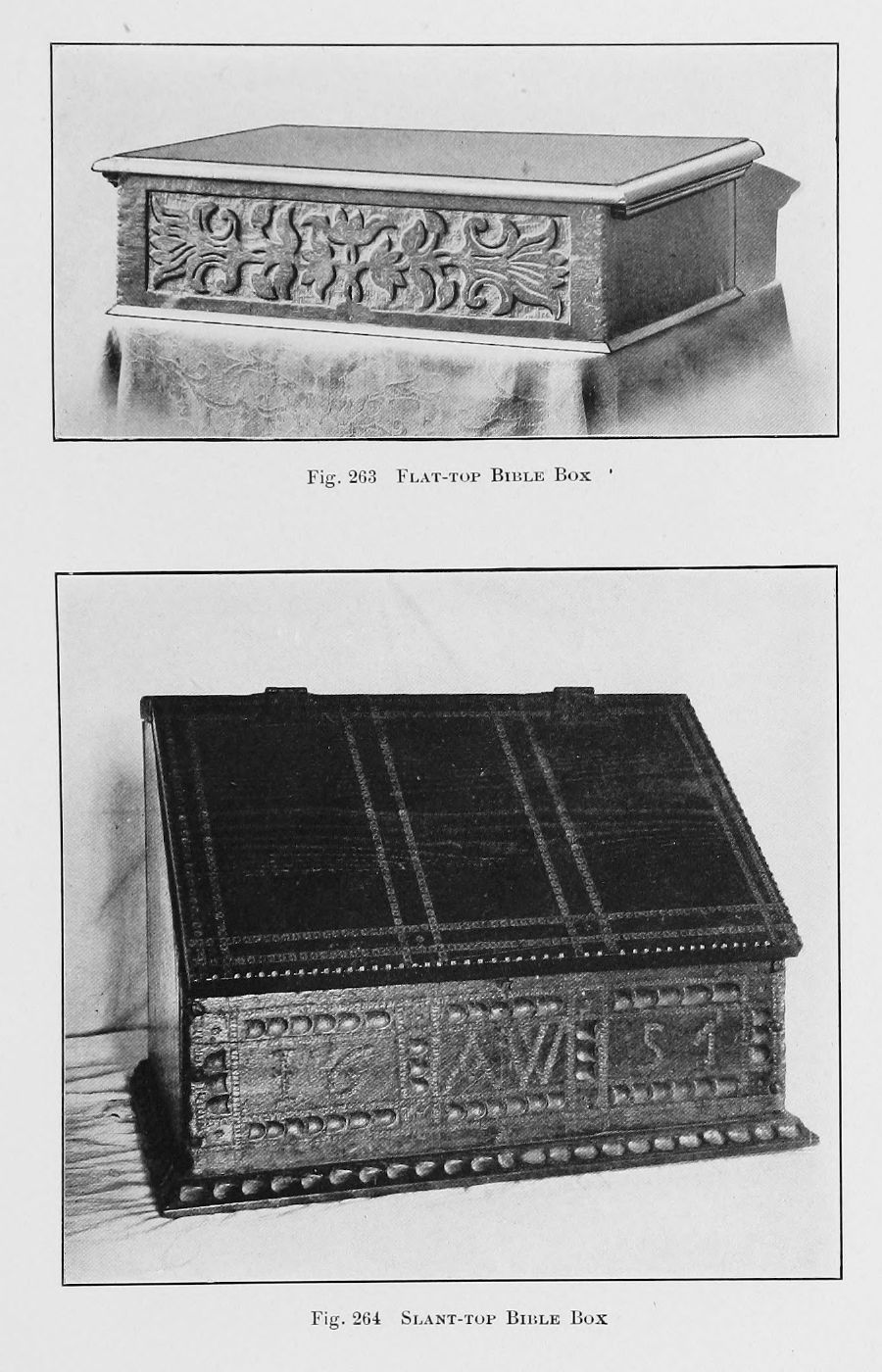 Another of these rare old Bible boxes is seen in Figure 264. This has a slanting lid, is made of oak, and has rude carving on the front and base. It is dated 1651, and has the initials of its Owner, A. W., on the centre of the front. The old iron hinges show on the top, and, in view of its age, the box is in an excellent state of repair. This box is twenty inches long and thirteen inches high. It once had a small shelf at the back.

The term " desk " occurs with extreme rarity in the old inventories, and even so refers to these box-like desks with either a flat or sloping top. By 1700 writing- tables were in use in Europe, and the French " scrutor," as it was most often called, began to be found Over here.

The combination of drawers with a desk top was one of the early forms taken by this useful piece of furni ture, and by as early as 1710 such desks were found here, both of domestic and foreign make.

When we take into consideration the activity of every maker and designer of furniture to publish a book con taining his ideas, we are not surprised that so many pieces resembling English work are to be found here, and were the product of our natire cabinet-makers. As early as 1739 works more or less valuable were being constantly presented to the public, and perhaps Wil liam Jones, when he published his " Gentleman's or Builder's Companion," in 1739, could call liimself the pioneer in this line, in England.

I am tempted to give the titles of some of the most valuable of these English books since I have received inquiries where such may be found. Not in this country, except in some cases as reprints, save in the cabinet of the collector of rare works. Yet some may be stowed away, their value quite unappreciated. An undated but early volume was brought out by the Society of Upholsterers and Cabinetmakers, and they called it by the high sounding title of " One Hundred New and Genteel Designs, being all the most approved Patterns of Household Furniture in the present Taste."

Then came William Kent, who not only laid out the gardens of the nobility, but published a book in 1744 in which be discussed furniture, and gave designs for tables, chairs, candlesticks, and mirror frames, and even for styles in dress. In 1750 William Halfpenny published his " New Designs for Chinese Temples, which meant summer-houses in Chinese taste, and which book also gave his ideas on furniture. Then appeared Chippendale's first edition of " The Gentleman and Cabinetmaker's Director, being a large Collection of the Most Elegant and Useful Designs of Household Taste." Furniture in the Gothic, Chinese, and Modern This edition was published in 1754, and there was an other edition in 1759, and a third in 1762. 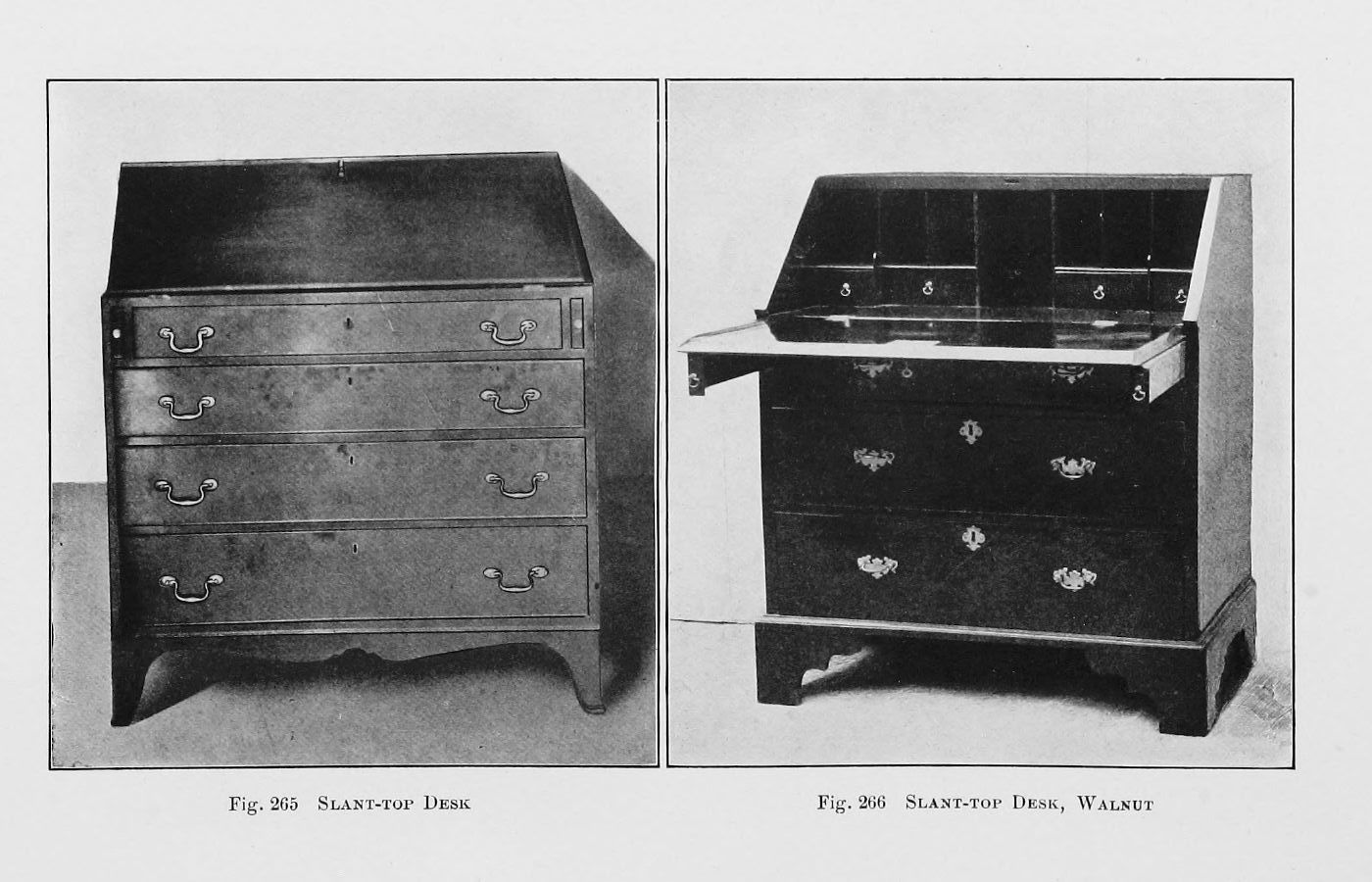 Thomas Johnson, a carver, came next with designs for picture frames, candelabra, ceilings, clock-cases, etc., which came out first in parts, and then was bound up. This was in 1758. In 1761 he published another book, called " One Hundred and Fifty New Designs," many of which were wildly rococo.

Copeland and Lock brought out sets of plates and some small publications between 1752 and 1769. "A New Book of Pier Frames, Ovals, Girandoles, Tables," was brought out in 1769 by Matthias Lock, and has in it many of the long-billed birds which we are so prone to call Chippendale. Edwards and Darley made their contribution in 1754, and Robert Mainwaring, in 1765, published what he was pleased to call " The Cabinet and Chairmaker's Real Friend and Companion." Mainwaring, although his name has no importance now, exerted quite an influence upon the cabinet-makers of his day, and his book had a large sale. While the charge is brought against him that he copied from Chippen dale, it might be more just to say that they both drew from the same sources, but that Chippendale impiwed on his models, while Mainwaring but accentuated their faults. "Ince and Mayhew, about 177, gave to the world Furniture,"

Hepplewhite and Thomas Shearer with some others brought out in 1788, " The Cabinetmaker's London Book of Prices," and Hepplewhite and, after him, his widow brought out, " The Cabinetmaker and Uphol sterer's Guide or Repository of Designs for every Article of Household Furniture." There were editions in 1788-1789 and 1794. Last of all came Thomas Sheraton, the most refined of all the great makers and designers. His books were called, The Cabinetmaker and Upholsterer's Drawing-book " published, 1791, 1793, 1794. The " Cabinet Dictionary " came out in 18 3, and the " Cabinetmaker, Upholsterer, and Gen eral Artists' Encyclopaedia," from 18 4 to 18 7.

Books dealing with the subject of cabinet-making and joinery were published late in the eighteenth century, by William Pain. Some of them were,Dictionary,"" The British Pal- ladio," "The Carpenter's Pocket "The Carpenter's and Joiner's Repository." There were also several others. Robert and James Adam also belong to this period, and though their avowed calling was that of Architec ture, the " Adam Style," as it was called, had a great influence on furniture makers of the time. For their Own houses and those that they remodelled, the Adams designed the furniture. This family was a great factor throughout the entire eighteenth century. The father, William Adam, designed and remodelled many Scottish mansions, for he was known by the high-sounding title of " Master Mason of Scotland." His four sons fol- lowed his profession, and of these the best known and most distinguished were Robert and James. Their most important books were " Works in Architecture by Robert and James Adam, Squires," which came out in parts from 1773 till 1778. To them we are indebted for the introduction of satinwood as a material for furniture and inlaying, and for a certain classical style of orna ment which they rendered in a purer form than their contemporaries. They used in their ornaments octagons, ovals, hexagons, rounds, lozenge-shaped panels, husks, fans, sphinx, Greek and Roman vases, wreaths, honey suckle, medallions with figures, festoons, fauns, goats, cupids, eagle-headed figures, drapery, ribbon-work, caryatides, mythological subjects, rams' heads, lions' and eagles' chaws for feet, griffins, sea-horses, Greek and Roman pateraas, and draped figures. From this it will be seen how they drew on every kingdom for their purposes, and Iioav they used not only their Own finds, but adapted the finds of others."