Michael Angelo Pergolesi produced a work on Deco- ration," which also showed many furniture designs, and he was distinguished for the exquisite decorations which he painted on such furniture as the Adam brothers de signed. He dedicated his book in the following high- sounding terms: " To the Memory of the Late Most High and Puissant Prince, Hugh Percy, Duke of Northumberland, avIio was a Patron of the Arts, and to whose Virtues this work is Dedicated by His Most Grateful and Humble Servant." The book contains over seventy large pages of the most exquisite and dainty designs for ceilings, wails, chimney-pieces, furni ture, frames, etc., and is a mine for those in search of beautiful ornament.

In France also many books on furniture and decora tion were produced. These were brought to England, and from them the English makers drew many choice designs which they copied bodily or adapted to suit their customers. After such a list as this, it does not seem strange that we made good work. Among the illustra tions in these books one is rather surprised to find, com- parath'ely, so few desks and secretaries. Many pieces of furniture for strictly bedroom use, like dressing-tables and stands, have in them a drawer which is called a "furniture drawer," in the description. In this drawer, which was cut up into many compartments, were spaces for pens, ink, writing paper, pins, wax, wafers and all the things which went to make up the writing parapher nalia, before the days of the fountain pen. So much furniture, other than what it appeared to be, was made during the eighteenth century that in many of them could be tucked what was needful to indite a billet-doux, or receipt a due bill.

The combination of drawers and a desk top, which I have referred to before, is shown in Figure 265, and there are few such desks which do not contain some where one or more secret drawers or receptacles. With the advent of safe deposit companies, and strong boxes which may be rented, the necessity for places to hide away valuables becomes less each year.

The novelist delights in placing love letters in these old secret drawers, but such inflammable material was seldom placed there except by romantic souls, to whom such tokens were invaluable. In making these desks, mahogany was sometimes used, cherry was more com mon, and occasionally walnut desks are to be met with, but these are rare.

A very plain walnut one is given in Figure 266, and is very solid and substantial. It was made about the middle of the eighteenth century, or perhaps a little earlier, and the chair beside it is of about the same age. Another of mahogany is given (Figure 267), an interesting fact about it being the carved ball-and-claw legs. There are also a number of secret drawers, some of them being concealed behind the pigeon-holes, and some below the lower row of drawers. This desk has a further claim to our notice from the fact that it once belonged to General Israel Putnam, and is now the property of Mr. George Ropes, of Salem, Massachusetts. 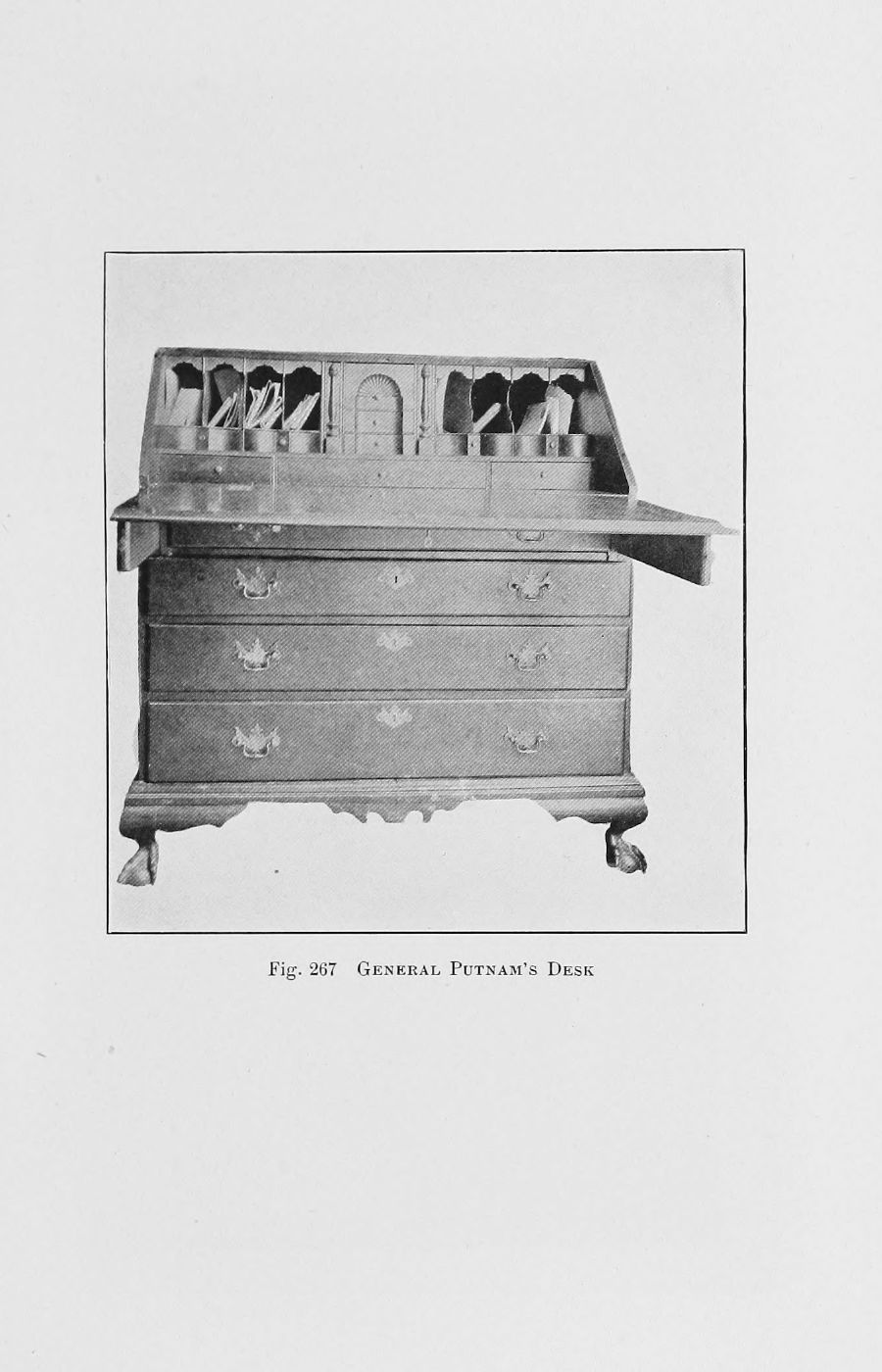 By the middle of the eighteenth century reading and writing became less of an accomplishment and more of a necessity, and the number of desks rapidly increased. Writing appliances were also fitted in bureaus; some times one drawer opened out into a desk, sometimes only a section of it let down, forming a small shelf with drawers behind. Many cabinet-makers indulged their oaati fancies in making desks. One of these odd shajies is shown in Figure 268, where the desk is shown closed; the whole front above the long drawer is a solid piece of wood, with the two borders at the side. When in use for writing, this top is supported by two rests which draw out for that purpose. In Figure 269 the desk is shown open; all the drawers are of curly maple, while several of them still retain the old brass knobs. The handles on the long drawer at the bottom are new and too modern in design. This drawer has a panel of the maple, and a band around it of the mahogany. The desk is at the Whipple House, at Ipswich, Massachu setts, that valuable repository of so many Colonial relics. 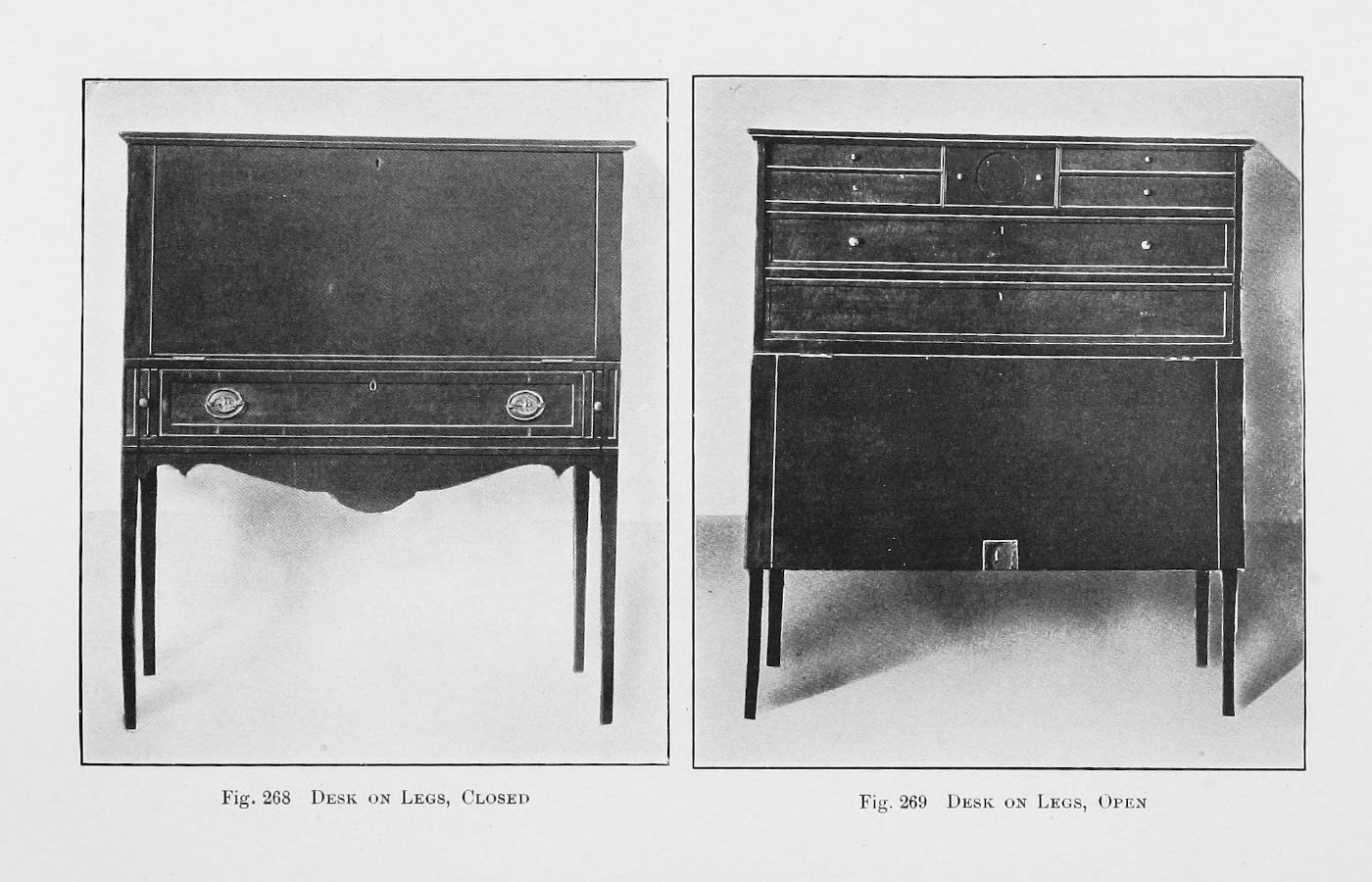 Very pretty little writing-tables were made for use, with tops which folded up, or opened out and were supported on rests. They had two drawers below, and looked much like the little work-tables that appeared about the same time.

In fact the branch of cabinet-making which related to ladies' desks was one of considerable interest. Shera ton made many of them, and in his books are designs for many more. A pretty and characteristic specimen of this maker is shovm in Figure 270, the woods composing it are maple and satimvood. Little drawers are concealed behind the doors, and compartments in the lower drawers are for the necessary implements. 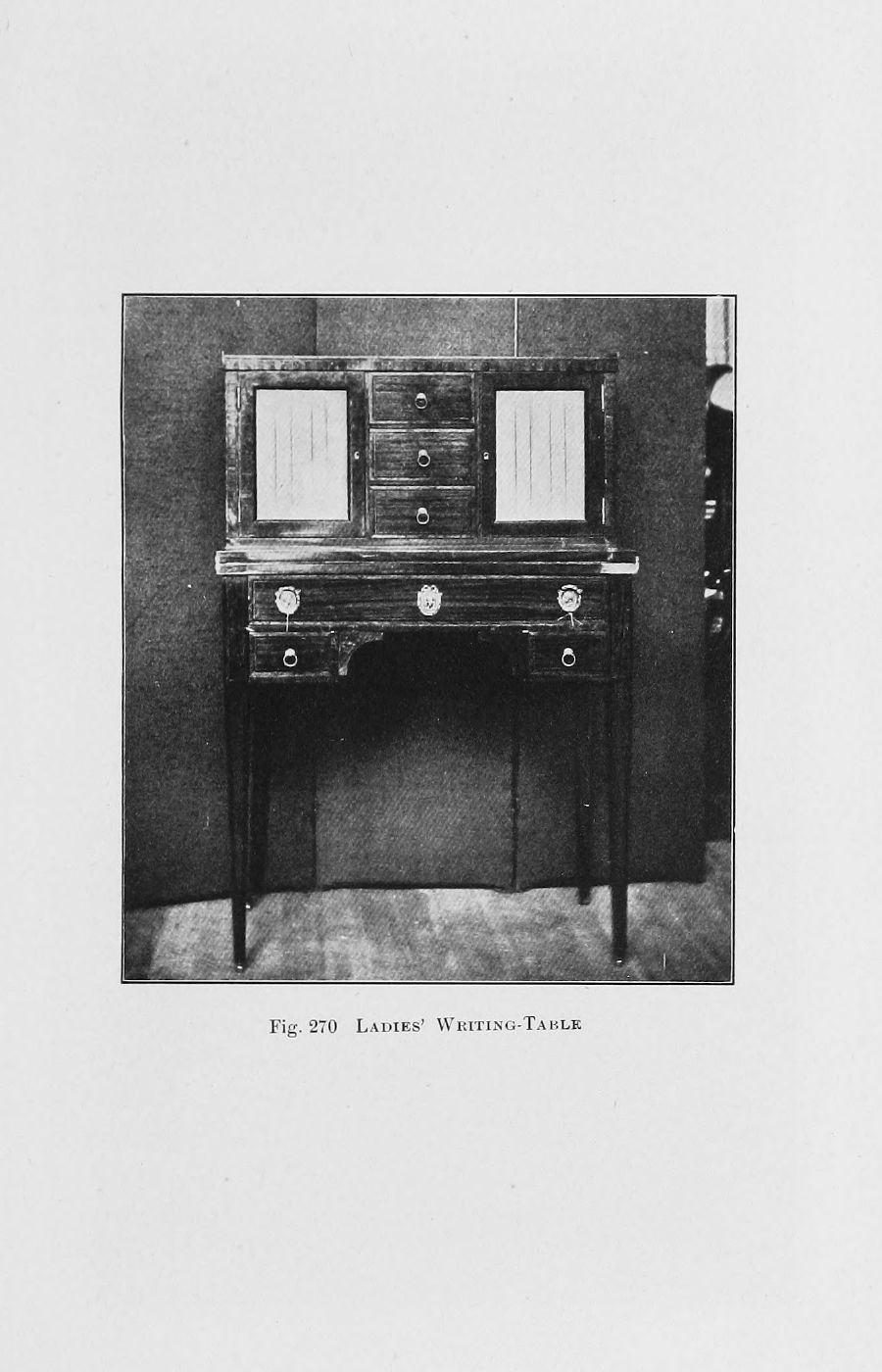 I have spoken of the fact that much of the furniture of the late eighteenth century was other than what it appeared. Under this head I give a description taken from Sheraton's book, of a Lady's Cabinet Dressing Table." This piece is not inappropriate here, as it has writing materials also in it:

"This table contains every requisite for a lady to dress at. The style of finishing them is somewhat neat and elegant. With respect to the manufacturing part, and what it contains, these may be learned from the piece itself when open. When the washing-drawer is in, a slider which is above it may be drawn out to write on. The ink and stand are in the right-hand drawer under the centre dressing-glass. Behind the drapery, which is tacked to a rabbet, and fringed or gimped to cover the nails, is a shelf on which may stand any vessel to receive the dirty water. Above the drapery are tambour cupboards, one at each end and one in the middle. Above the tambour at each end are real drawers, which are fitted up to hold every necessary article for dressing. The drawers in the cabinet part are intended to hold all the ornaments of dress, as rings, drops, etc. Behind the centre glass is drapery; it may be real to suit the portion below, or it may be painted to match.

Such a little table as that given in Figure 270 is recommended by Sheraton, as the lady witing may sit at it near the fire, from which the upper part screens her face. As may be seen the writing-shelf opens on hinges, and room for the knees is afforded by the portion which is cut out. Kidney Tables for writing named on account of its resemblance to the intestine called," parts of animals, so Sheraton says) were also made for writing at too, and so were some of the popular Pembroke tables, named from the lady who first de sired one of this pattern made for her.

After the combination of table and desk, the next most desirable union of two articles in one, was that of desk and bookcase. All the pattern books show innu merable designs for these, from heavy and cumbrous pieces of furniture to such graceful and elegant pieces as that given in Figure 271 A. This piece belonged to Washington Allston, the well-known American painter, who died in 1843. It is a more than commonly hand some piece of furniture, decorated with both carving and inlay. The ball-and-claw feet are carved on the knees, and there is a beautiful shell in the opening of the broken-arch cornice. The glassed door is in Gothic pattern, and many are the directions given for fluting or draping the silk which it was customary to put in these doors. All the pattern books give such directions down to the most minute point, for the benefit no doubt of country cabinet-makers, and such amateurs as cared to attempt it themselves. 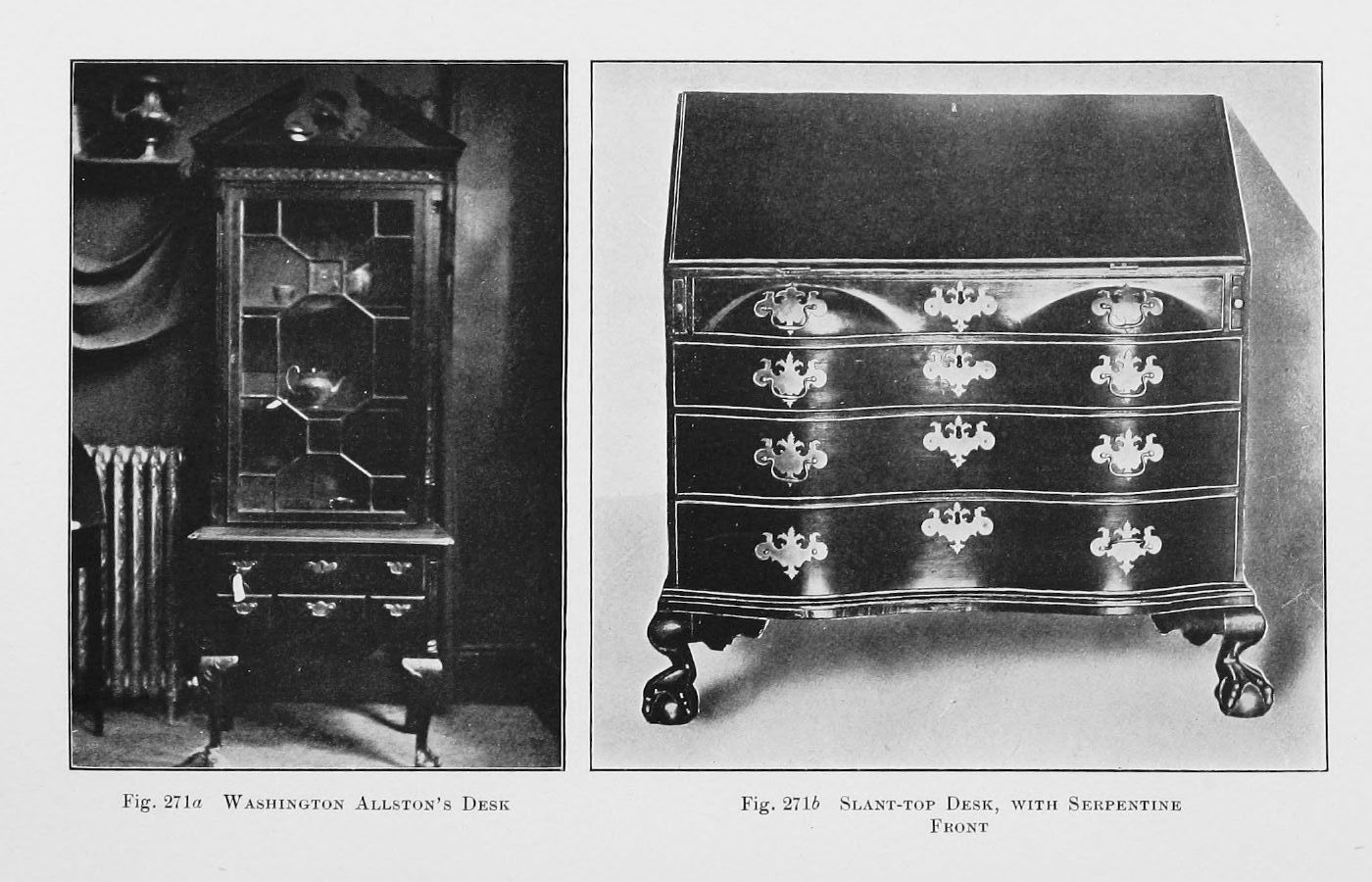