Sheraton used more veneer than Chippendale, since he used inlay while Chippendale used carving, and his instructions regarding the use of it are very definite. He says, " If the veneer be very cross and unpliable, as many curls of mahogany are, it is vain to attempt the hammer. It should be shrunk and tempered well with thin glue, not with water, and if necessary the caul, used." which is the surest and best method, should be 11

By 178 there were cabinet-makers all about the Front country, turning out numbers of not only useful but ornamental articles. In 1774 the following advertisement appeared in the New York Gazette and Weekly Mercury ": Mahogany Furniture.

3 elegant desks and bookcases. 1 chest upon chest of drawers. 1 lady's dressing-chest and bookcase. 3 desks and 1 pr. card tables. 2 setts chairs. 3 Dining-tables and 5 breakfast tables. 1 clock case furnished with a good plain 8-day clock. Sundry stands, etc. The above articles are well made, and most of them are of wood of the first quality, and will be sold as low as any furniture of equal value in the city, by WlLLET AND BERASEY, Cabinet and chair makers, at the sign of the clothes press, nearly opposite the Oswego Market, at the end of Maiden Lane. There were made at this time, also, desks and bureaus with what were called block and serpentine fronts. Fig ure 271 B shows a fine example of a slant-top desk with a serpentine front. The block-front furniture was finished off square on the swelling part instead of rounded, but both block and serpentine drawers were cut from the solid block of wood. This fine piece of mahogany has the original brasses, only one handle being gone. It has the moulding in its simplest form about the drawers, and handsomely carved feet of the ball-and- claw pattern. It has a more quaint aspect in reality than is given by the photograph. This style of desk seems to have been quite popular in New England, and in the Antiquarian Rooms, at Concord, Massachusetts, is a similar desk, made by Joseph Hosmer about 1765. It is of cherry and is in an excellent state of preserva tion, but is less handsome in colour than the one show, which is in the Whipple House, at Ipswich.

I have seen also some desks of this pattern richly inlaid in satinwood, with spread eagles, and sometimes with initials or a monogram. Floral forms are used too, and the work appears to have been done here, or at any rate in England, and leaned rather to the Italian style than to the close-set Dutch patterns. In a few cases I have seen combined on the same piece both inlaid work and painting, but I considered the painting an after thought, and that it was not put on when the piece was made. Sometimes it may have been added by the daughter of the house, fresh home from a finishing school, where "painting on tiles, in the Sweetest of styles," was one of the most popular branches of female " academies."

After a time some of these desks were fitted with bookcase tops. Such a one is given in Figure 272, its unusual feature being that the doors are fitted with wooden panels instead of glass. 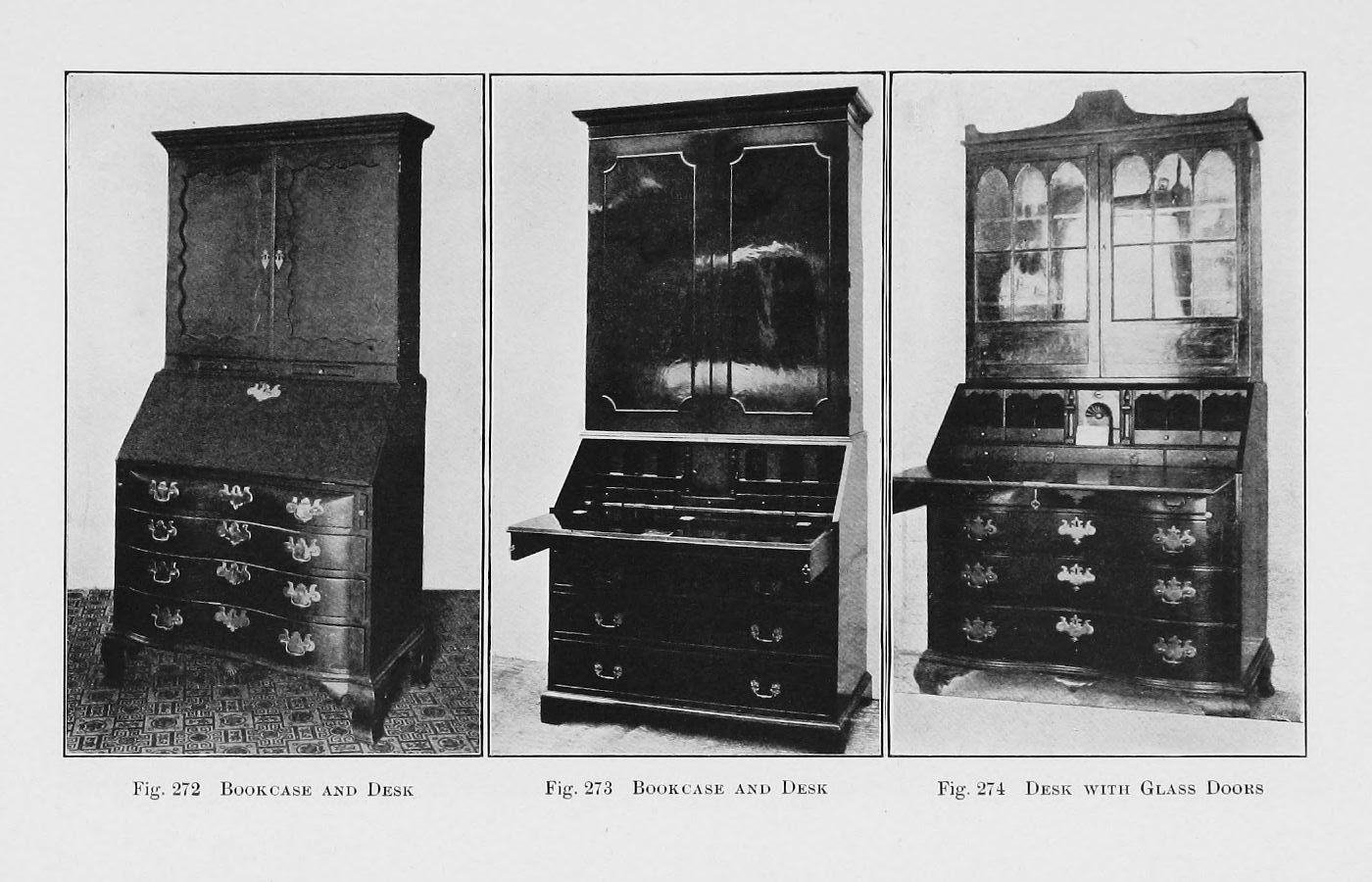 Another one is shown in the next figure, 273, the desk open to show the fine workmanship. This book case which was made between 1730 and 1760, is eight feet six inches high, and must have been made for a house of consequence, Owing to its great size. The bookcases were not dwarfed by the beds and clocks shown in previous chapters.

A very elegant secretary, with glass doors in Gothic style, is shown in Figure 274. It is made of solid mahog any, like its fellowS already shown, and in one of the secret drawers is written the following inscription: 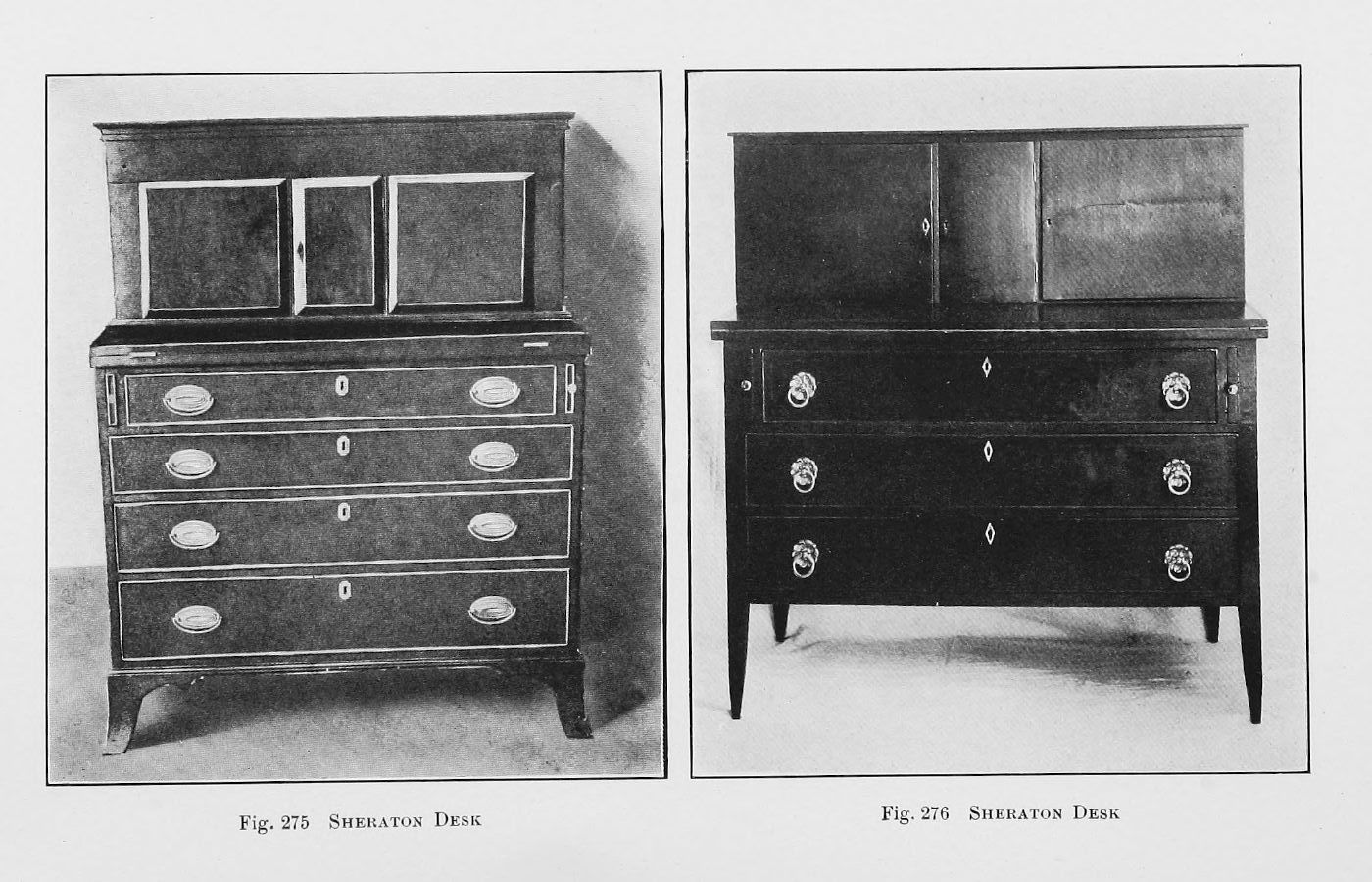 "This secretary originally belonged to a family named Wil cox, of Worcester, England, and was brought to this country by one of the family in 1810, and was then about seventy-five years old, having been made between the years 1732 and 1738." Pasted on another drawer is still a second record of ownership: "Presented to my wife as a token of respect on my birthday of seventy years, March 16, 1881. " J. N. Bates, M.D."

By some strange vicissitude of fate, this old desk wound up in Worcester, Massachusetts, nearly 150 years after it was made in Worcester, England.

General Washington was always on the alert to buy comforts and luxuries to make Mount Vernon more attractive. In 1774 (he was only Colonel then) he bought many goods from the splendid home of the Fair fax family on the Potomac. Owing to the decision of the family to remain in England, all their household goods at " Belvoir " were to be sold at auction. The list of what Colonel Washington bought is still preserved. There were many items, chiefly of mahogany, — beds, tables, sideboards, etc., — and among them was one mahogany desk for which he paid £16 16s., a very high price, indeed, for those days. It was at this desk, no doubt, that he wrote those long letters containing such minute directions to his factors in London, regarding the business they transacted for him, and the goods they purchased for him, including his and Mrs. Washington's clothes.

In Figure 275 is shown a Sheraton desk, the lid of which is folded back and supported by rests. The three little doors at the top open, disclosing pigeon-holes and drawers, with two or three compartments artfully con cealed. The foot used on this desk is of the type known as " French foot," the outward curve giving it a more graceful appearance than when it came down straight with the edge of the desk, in which case it is known by the term " bracket foot," and is seen on many different styles of pieces, such as desks, bureaus, bookcases, etc.

The desk of Salmon P. Chase, a plain piece of fur niture made from mahogany, is in one of the rooms of the Treasury Department at Washington. It was at this desk that some of the details of his financial system were worked out, and here he planned his first great loan to carry on the Civil War.

There are many of these old desks scattered about the country, their chief claim to interest being that once some well-known man leaned over them. Alexan der Hamilton's travelling desk, made of mahogany and measuring twelve by sixteen inches, and ten inches high, is an interesting object to all who are familiar with the history of this great man. Upon this desk was written much of his literary work, and the worn green baize with which it is lined attests to the use to which it was put. There is a drawer in one side, and several com partments for pens and ink, while upon the top is inlaid a silver plate with the name " General Alexander Ham- ilton " engraved upon it. Within the top is a strip of parchment which says, " Given by Mrs. General Schuyler to her daughter, Mrs. General A. Hamilton." No doubt the convenient size was what recommended it to the General.

Nathaniel Hawthorne's desk is presen-ed at the Cus tom House, Salem, Massachusetts. A desk at which he wrote some of his inimitable romances was just a board standing out from the wail at an angle. This is still in the Tower Room at " Wayside," his home at Concord, Massachusetts.