Victor Hugo had in his Guernsey home a study built almost entirely of glass, and perched upon the roof. Like Hawthorne he, too, stood at his writing, and his desk was a mere shelf fastened by hinges to the wail. But these were mere appliances for the com-enienee of genius. Every-day people demanded and had some thing better adapted to their needs, and there were many bookcases and desks combined which were large and handsome pieces of furniture.

Many tales could be told by these desks of use, then of abandonment, and of final resuscitation. Here is one said to be true, but the ending is not as it should be. For many years Mr. Samuel Tilden had, in his office in Nassau Street, a fine old walnut desk with innumerable pigeon-holes and some secret drawers of which he never would confide the wbereabouts, nor would he tell if he hunted in spare moments for others. There was nothing remarkable about the desk, except that it was a good one, and that it was adding to its years of service by growing still older under the con stant use of a famous man. After Mr. Tilden's death the desk, with some other pieces of his office furniture, was put in the loft of the office building and forgotten. As time went by the room in the loft was demanded, and the furniture was put in the cellar. Moving about and lack of care had not improved the looks of the desk, and though it was still staunch and strong it did not seem to be of much value, for now the roll-top desks had come to the front. One day even the room in the cellar was needed for vaults, and the furniture in the cellar, of which the desk was a part, had to be disposed of.

The janitor not knowing just what to do in the matter at last had the poor old desk broken up and fed to the furnace, watching its destruction as the old walnut flamed high in the furnace. Years passed by, and the time came when old-fashioned things and the relics of famous men were much in demand. Still another year went past, when one day a note arrived from the former private secretary of Mr. Tilden, aaIio wrote in behalf of the family that they were anxious to secure the old walnut high-topped desk which had been used so many years by Mr. Tilden in his office. Would the janitor, so the letter ran, kindly get out the desk and ship it to them, after having it carefully crated? The family would of course pay all expenses.

For a few moments the janitor was nonplussed. Then he gathered his wits about him, and remembered that another tenant of the building had had a desk some- what resembling that of Mr. Tilden, which in its turn had been abandoned also. This was promptly crated and sent to Mr. Tilden's relatives. It was returned within a week, for, you see, they knew the difference. With it came a letter, saying that they would give $250 for Mr. Tilden's desk. For a week that janitor dreamed of seeing $250 slowly burning up in the fur nace! Then he wrote and told his tale. There was some consolation, however, for they wote again, asking if he had anything that was Mr. Tilden's. And he sent them an old pair of boots which had really belonged to Mr. Tilden, and had in some way escaped destruction. The return mail brought the janitor $50 in exchange.

Another and rather pretty style of Sheraton desk is shown in the next Figure, 276. This has but three drawers in the lower part, though they are small ones, and pigeon-holes behind the little doors. This desk has the ivory escutcheons which always were put on the best class of furniture, and a set of rosette and ring handles. The doors and drawers are veneered, but the writing-shelf is solid mahogany.

There was another combination that seemed to please our ancestors very much, if we may judge from the different forms we find it in, and that was the bureau and desk. I give one in Figure 277. This one is made of mahogany, and is a very handsome and solid piece of furniture. When it is closed it looks like a bureau with seven drawers; but the middle drawer of the second set opens out, as you see. I have found similar desks of English, Dutch, and American make, the one shown being English. I know a Dutch one that is very handsome, as it is carved and inlaid in their beautiful fashion, and it has a third use as well, for the two tall drawers are partitioned off for bottles, each one being capable of holding six. Surely one object could not be expected to fill more purposes than this, where your clothes could be kept cosily, your literary work dis patched, and a cellaret at your very elbow. This Dutch bureau has a date, a most unusual thing to find on fur niture. On the back of one of the bottle drawers, and only visible when the drawer is taken out, is a bit of paper pasted, giving the name of the maker, the town in Holland where he lived, and the year he made the bureau, 1789.

I should place the bureau in Figure 277 at least ten years later, but a fine and interesting piece. Within the year I have seen five bureau desks of similar style, all gathered in central New York State. They are not common in the antique shops, which make them even more desirable.

Speaking about these deep side-drawers in both side boards and bureaus, Sheraton says:

"The drawer on the left is generally plain, but sometimes divided into two portions, the back division being lined with baize to hold plates, having a cover hinged to enclose the whole. The front division is lined with lead, so that it may hold water to wash glasses, which may be made to take out, or have a plug-hole to let out the dirty water. The left-hand drawer is, however, sometimes made very short, to give place to a pot- cupboard behind, which opens by a door in the end of the side-

\\ 1'V 1 "" II ^H board or desk. This door is made to hide itself in the end rail as much as possible, both for look and secrecy; for which reason a turn-buckle is not used, but a thumb-spring, which catches at the bottom of the door, and has a communication through the rail, so that by touch of the finger the door flies open, owing to the resistance of a common spring fixed to a rabbet which the door falls against. This cupboard can only be placed in these pieces of furniture which are square at the ends." 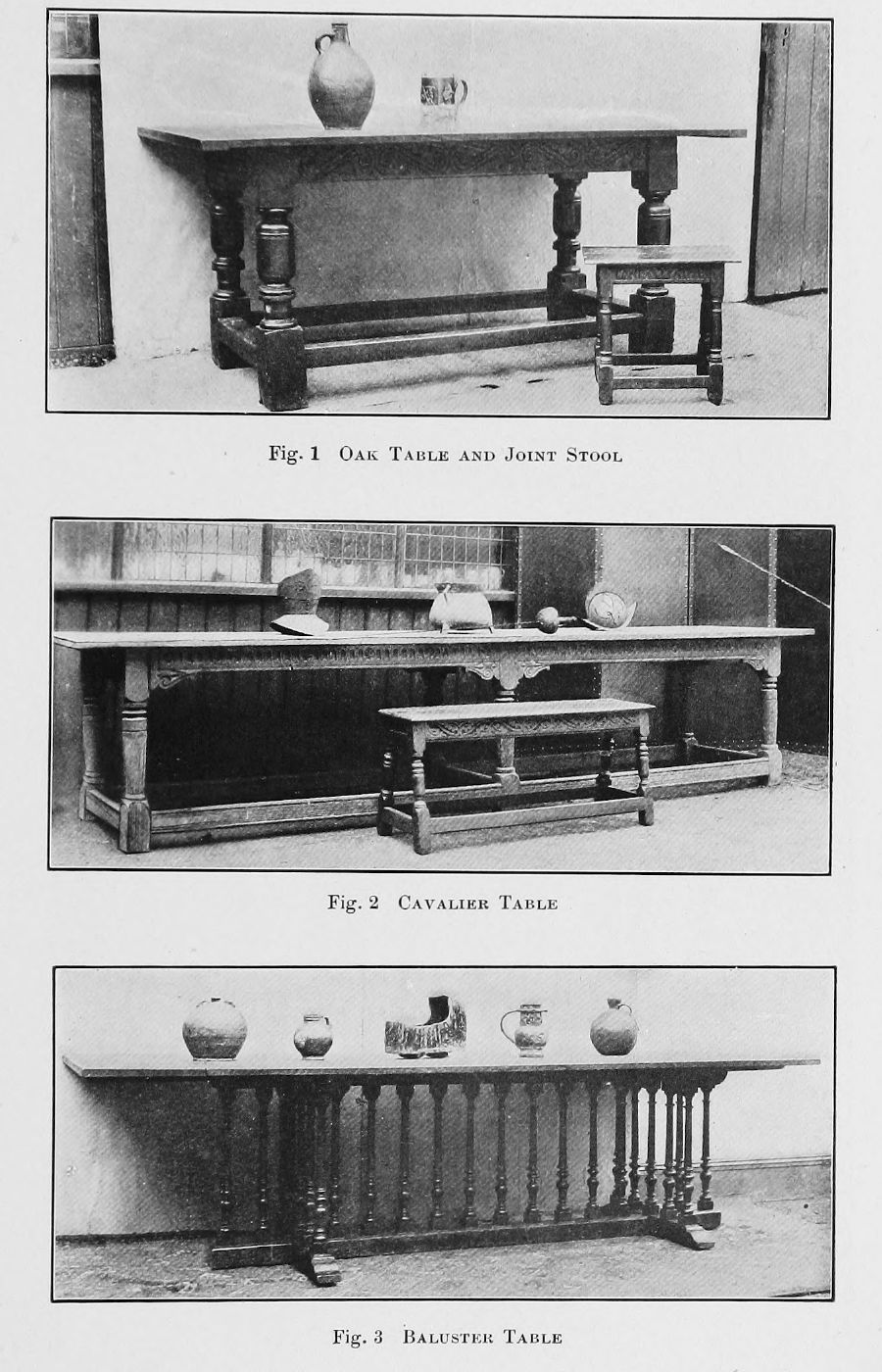 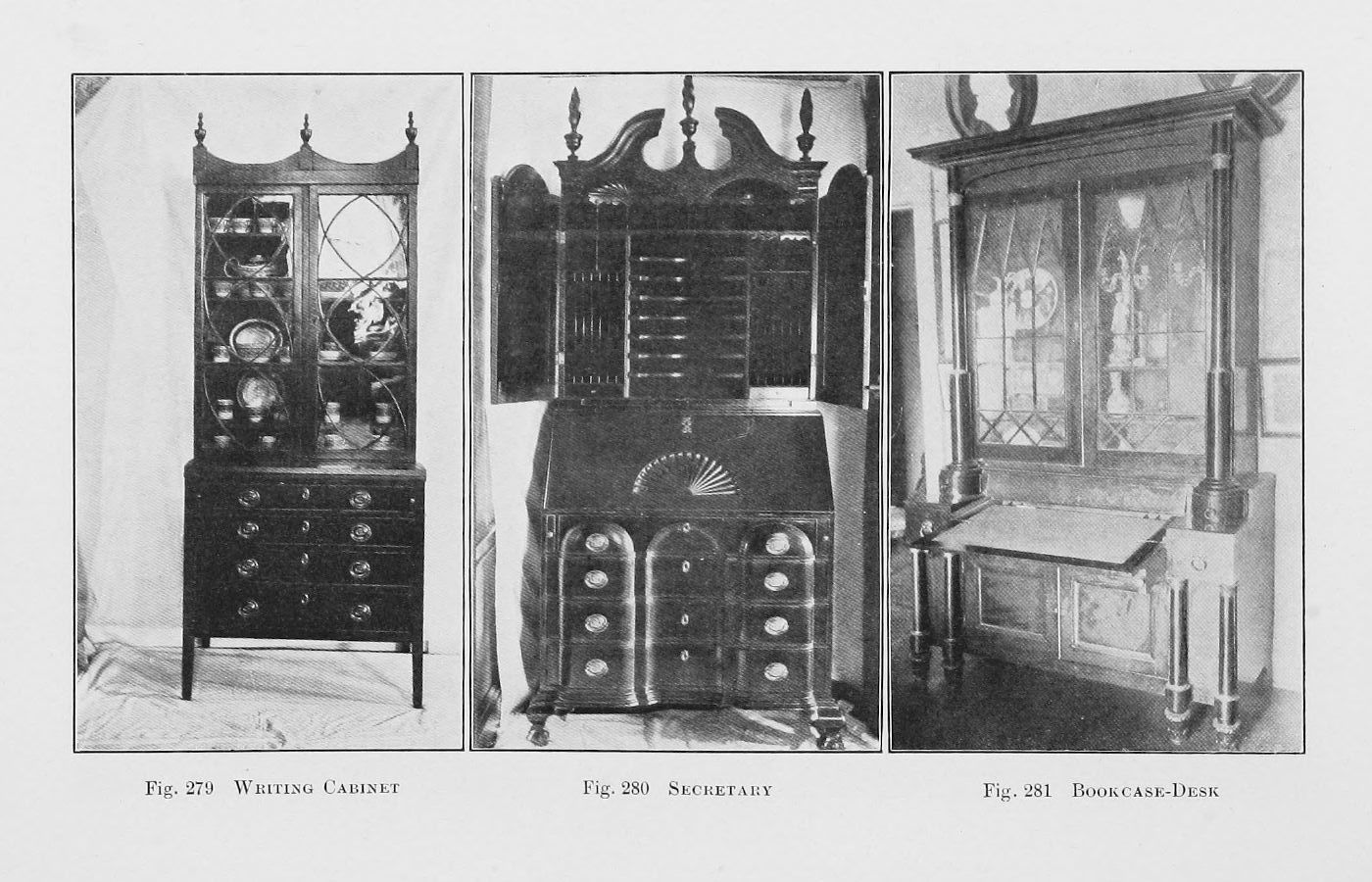 Another desk, somewhat on the order of the bureau- mm desk, is given in Figure 278. This I should call a side board-desk, for the deep drawer lets down with a brass arm, and discloses a desk within, with its proper com plement of drawers and letter-holes. The date of this piece is doubtless about 1800, for it is a composite style, and I doubt not that it was made here. It has some very choice inlaid work, both about the mirror and the deep drawer, which the photograph does not reveal. There is good solid carving, too, but for all that the piece is not attracth-e. It is interesting simply as a rather unique specimen.

Hoav much superior in elegance the next piece appears (Figure 279). This is a writing cabinet on a Sheraton model, the upper part being designed for books, and the lower containing a desk and drawers. Obseiwe the handsome curves in the glassed doors, and the purity of the ornamentation on the top. This book case-desk is of mahogany, and in every way an admir able example. In Figure 280 is given one of the choicest specimens of massive construction shown. I do not think it is as old as many of the serpentine- front pieces are, from the style of the interior fittings of the upper part. It is, no doubt, a product of the eighteenth century, however, and in splendid condition, the whole piece being of dark and solid mahogany, making the desk immensely heavy. The carved flames or torches on the top, the shells on the front of the desk and in the inside are finely done; and it is such a desk as you would expect to belong to one of those maritime princes whose ships roved every sea, bringing home to their Owners in Salem the richest cargoes to be found. See the shelves for the great ledgers, wherein were entered the accounts of all the argosies which had come safely home; and think how many times the owner, bending over the writing-shelf, must have entered the long col umns of pounds, shillings, and pence on the side of profit.