THAT the interest in old china is not subsiding is very evident from the inquiries of many correspondents who ask about pieces which they own. Recently I have had letters referring to an article published in 1901, the writers having had their questions in mind all that time, but "just getting round to it."

Indeed, the true collector, when once embarked on his career, is seldom content to keep in one narrow path, but strays out in many directions, and finds pleasure in them all. In support of this theory I am tempted to quote a letter from an unknown correspondent, aa'Iio finds much under her own roof, and is not only interested herself, but has managed to interest others. The letter begins, " Dear Friend," and after some kind and complimentary remarks, goes on as follows:

"I have made a fine collection of quaint old things from 'up garret ' and elsewhere at home. Father's ancestors were among the earliest settlers of Ipswich, Mass., and my father is now hVing at the age of ninety years. My mother's family had a grant of three thousand acres in Orange County, N. Y., from Queen Anne, where they were all born, lived, and died, from that time; even my mother was born there. From these Huguenots I have little else than a ' Bull's Eye ' watch, but from a generation later have linen coverlets, bullet-mould, powder-horn, etc., and shoe-buckles of General Washington's time. Now I sigh thinking of lovely, old things sold to the 'Junk man.' Every time I read anything you have written, go ' a-rummaging '

"The family all laugh at me, and call me 'Old Antique,' but they were interested enough, notice, when I found an original ' led-pencil ' and showed them the evolution of the Pen. First a quill, from a desk of 1755, the feather part all moth-eaten, then steel pens dedicated to Washington, Webster, Croton Water-works celebration in 1845, Free Mason, etc., down to our Own Fountain pen. Such queer handles as there were among them! I send this sketch of Pewter Shaving-box and soap-box with queer cake of soap, old and dried. Not the one stolen in 1777, I hope ! "

(This latter remark refers to an advertisement mentioned in the article on Pewter.)

To the majority of us china exerts a fascination which we cannot resist, and from the very nature of the field, since this country was so largely settled by emigrants from England, English china is what most naturally comes our way. Nor is there no possibility of collecting choicer wares also of English make, and in this chapter a number of specimens of porcelains, collected in this country, are given.

"How shall know pottery from porcelain? " This question is asked me many, many times. They may be distinguished by the following very simple test: If you hold your piece up to the light and can see light through it, that is, if it is translucent, it is porcelain.

Pottery is opaque, and is not so hard and white as porcelain. The main differences in the manufacture of stoneware, earthenware, and porcelain are due to the ingredients used, to the way they are mixed, and to the degree of heat to which they are subjected in firing.

Most of the old English wares found in this country are pottery or semi-china, although the term china is commonly applied to them all.

The potteries in Staffordshire, covering an area ten miles long, were the most important in England, in view of the fact that besides Hanley, Cobridge, Fenton, Longport, Shelton, Tunstall, Lane End, and Stoke-on- Trent they included Burslem and Etruria, made famous by being the seats, first at Burslem and then at Etruria, of Wedgwood's potteries.

I have spoken before of the small price at which these pottery wares were sold when they were first made, and how the price has risen little by little until it has become quite preposterous. It must be distinctly borne in mind, however, that it is the historic crockery only which is so valuable, decorated with scenes relating to our oaati early history or to our heroes, and, with but a few exceptions, made in rich, dark blue.

One of the earliest Staffordshire products was what was known as "saltglaze" ware, a certain coarse pottery which was glazed by putting salt in the kiln in which the objects were being fired. This ware was formed in moulds, and in the case of plates the borders were often exceedingly pretty and intricate, like that shown in Figure 28.

Many of the moulds used were those of metal cast aside by silversmiths. Complete dinner and tea sets were made, as well as small figures. Very rarely flat ware is found painted in color upon the glaze.

There is a class of pieces made a little later than the dark blue and less interesting. They are printed in various colours, and have the merit of being decorative and comparatively cheap. Figure 29 shows such a piece; it is part of a set called "Picturesque Views," made by Clews, and this particular view is called " Near Fishkill." You will find them in black, red, green, purple, browi, and a medium shade of blue. An artist named Wall, from Dublin, Ireland, made the original sketches of these scenes, and there were about twenty- five in all. You can always tell them by their border, which is of flowers and scrolls, with two birds placed at intervals among the scrolls. Besides the views of Hudson River scenery, the Picturesque Views contain two views of Pittsburg, with boats in the foreground, and one of " Fairmount Water Works, Philadelphia." You will find these pictures on flat ware, i.e., plates and platters, on vegetable dishes, and pitchers. Plates in good condition, ten-inch size, like the one shown, are worth, at the very highest, five dollars; smaller sizes, less. Platters, fifteen-inch size, well printed and clear, will perhaps fetch ten dollars.

There are views by other makers, like Adams or Jackson, which are harder to find and more desirable. In Figure 30 is shown such a plate made by Adams, and called " Catskill Mountain House." The Adams pottery is always good, and there are over a dozen different views taken in various parts of the Eastern States. They range in price from two to two and a half dollars higher, size for size, than the Clews pieces. Jackson's pottery, of which there are over thirty views, varies much in price, the " Hancock House " plate commanding twenty dollars, while " The President's House, Washington," is worth but half that sum.

In the deep blue Staffordshire I show in Figure 31 two English views, and there are doubtless many pieces belonging to these and other series tucked away in odd places and half forgotten. The beautiful fourteen- inch platter at the top is by Adams, and shows the "Castle of Fleurs, Roxburghshire," on one of the finest estates in Scotland. The castle was built in 1718, and belongs to the Duke of Roxburghe, aa'Iio recently married an American girl, Miss May Goelet, so that the interest in this piece may well increase till it be comes as popular as the views below which are of "Blenheim," the seat of the Duke of Marlborough, it, who married Miss Vanderbilt. 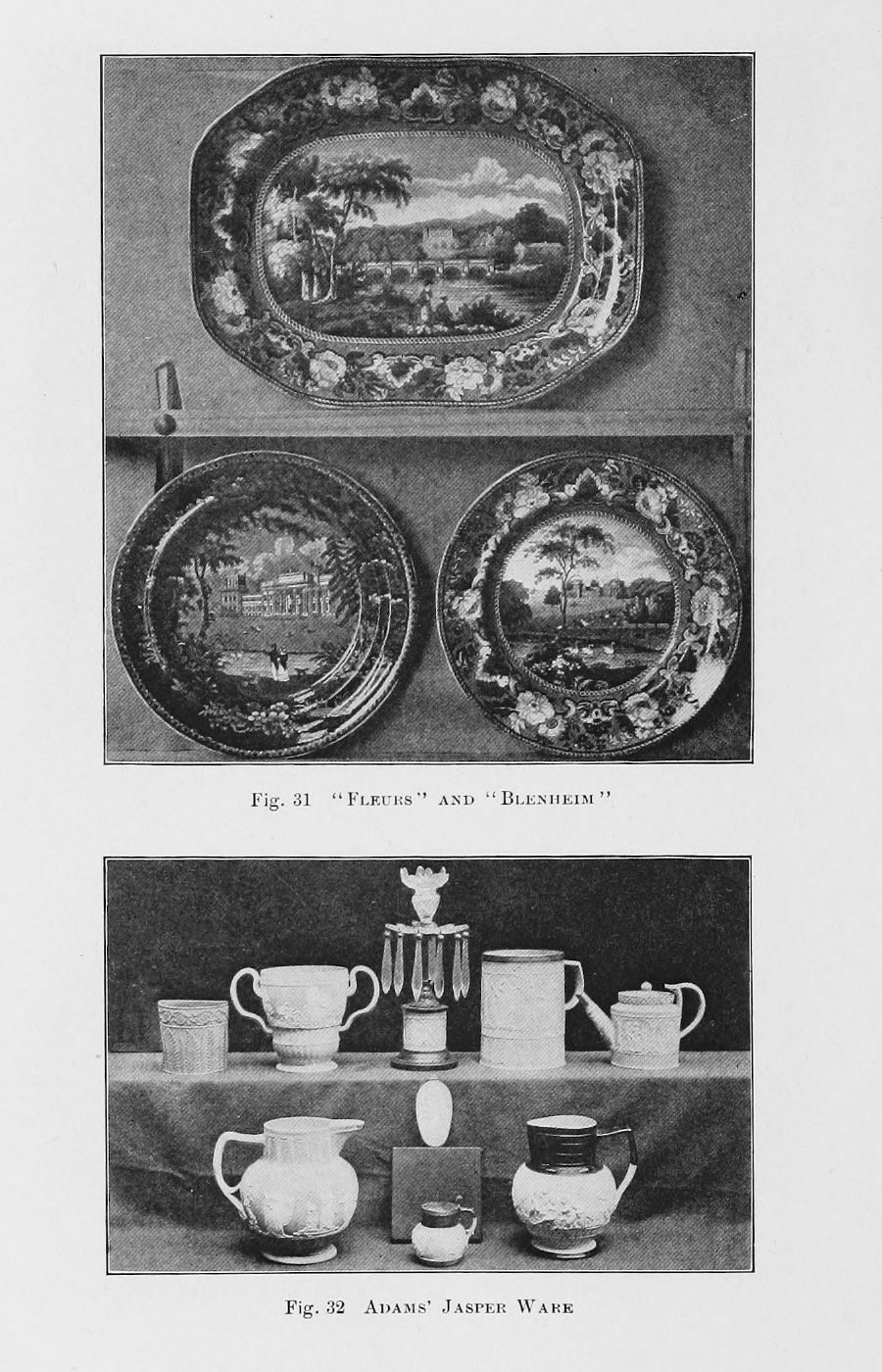 Both of the lower views are of Blenheim, the one on the right being by Adams, and much the rarer and finer of the two. The other one is by an unknown maker. The Adams piece has long been esteemed by collectorsfor the beauty of its colouring and printing, and the international complication has just given it an added touch of interest. Both the Fleurs platter and the Blenheim plate belong to the same series, as will be seen by examining the border. It cannot be too often mentioned what a very important part the border takes in these old plates. By its means the maker of a piece can usually be identified, for, al though the old potters " borrowed " the central views from each other with the greatest freedom, they were very scrupulous with reference to duplicating borders. Only in a few instances, where potteries and the blocks on hand passed to other Owners, was there con fusion. These instances are quite well known, as, for example, the similar patterns used by A. and R. Stevenson, and the famous bluebell border used by both Adams and Clews. Adams was, however, generally quite particular to sign his name, and it appears in the scroll with flowers which is on the back of the plate.