Indeed, there is hardly anything ceramic which bears the name of Adams which is not worthy of the collec tor's interest. There are those who confine themselves to articles made by the Adamses only, and they pos sess varied and beautiful objects. The Adamses came of a race of potters, and William Adams, the friend and pupil of Wedgwood, was one of the few who used the splendid jasper body invented by Wedgwood with almost the skill and taste of that master himself. The years when Adams worked, from 1787 to 1805, was the time when the classical figures of Flaxman had such a vogue. In Figure 32 is shown a group of the JLM jasper pottery made by Adams, and the grace and elegance of the figures speak for themselves.

It is often said that Adams " copied " Wedgwood, but while it is true that he worked in the same manner and material, there are details which are all his Own, and his use of colour and form was quite original with him. It is also true that of all the potters working at that time, his work, in its finish, came the nearest to the perfection of Wedgwood's, and after the death ) of the latter, in 1795, many pieces of Adams' jasper had his name erased from them by unscrupulous dealers and were sold as Wedgwood.

After the death of William Adams his son carried on the business, and in 1849 and 1850 made some of the earliest Parian figures put on the market. The earliest use of this material was by the firm of Cope- land and Garrett, aa'Iio succeeded Spode. They potted at Stoke-on-Trent and had used Parian in 1848. But the Adams figures far excelled all others, and how charming they were can be seen from the small group shown in Figure 33. 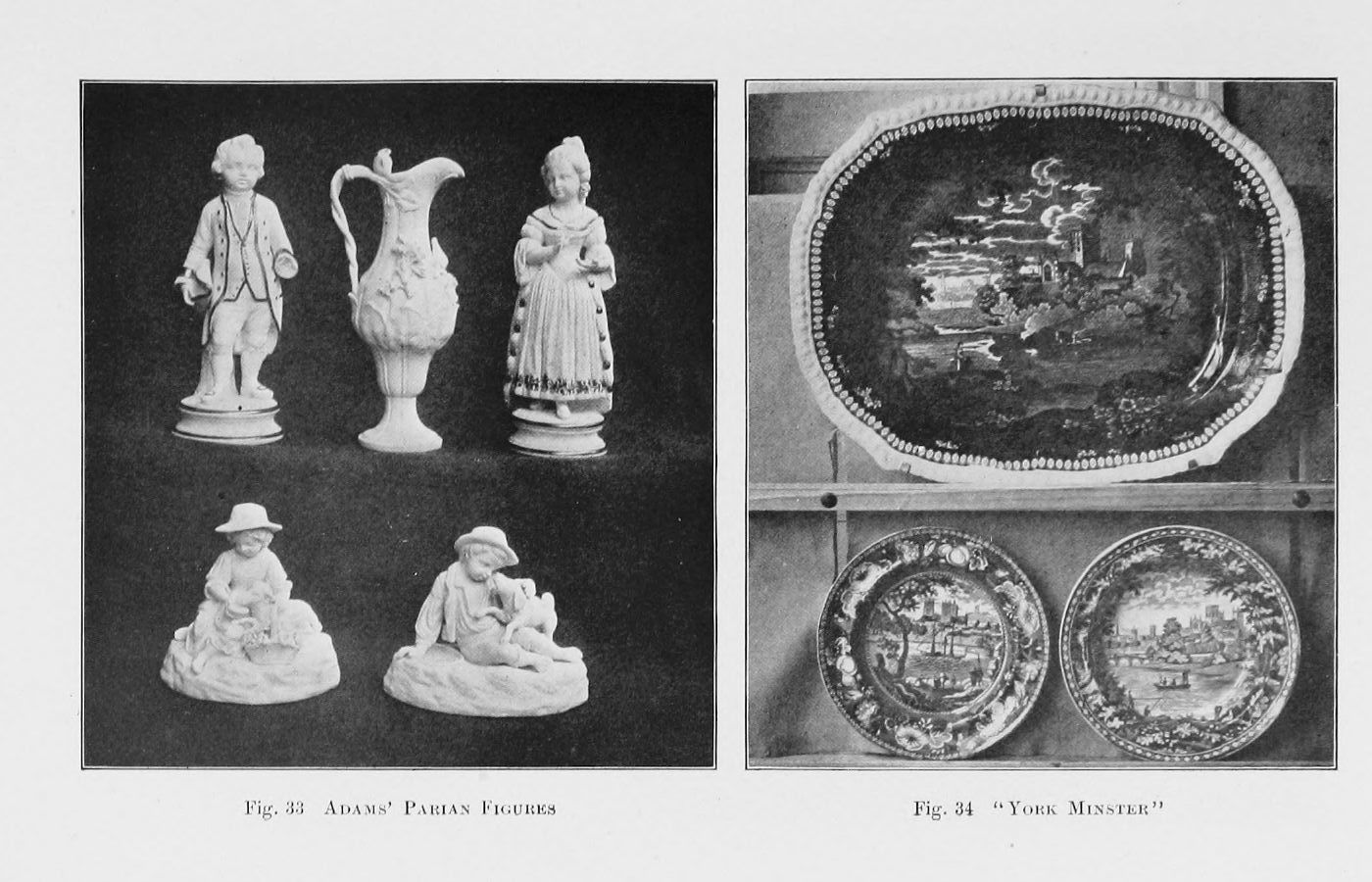 Still another field for the collector who delights to specialise is in collecting one branch of the splendid English views, like the cathedrals. In Figure 34 are shown three views of York Minster, — the upper one by Stevenson, the lower one with the steamboat a rare piece by an unknown maker, and the other one by John Geddes, also uncommon.

Views of cities like the one of Southampton (Figure 35) are allways attractive and ornamental, and you do not realise the beauty of colour and the immense variety of shades used by these Staffordshire potters till you have a dozen or more pieces by different potters on your wails.

The coats of arms of the different states is an in teresting if limited field, and although a number of these pieces were made by T. Mayer, at Burslem, England, for the American market, in the popular dark blue, about 1829 and later, they are not easily found. Taato even less common renderings of the arms of Maryland are given in the next two figures (36 and 37), and though these are highly coloured, they are Staffordshire ware, the one with the designs on the rim having the impressed mark " Ironstone," while the other has no mark. Religious scenes are represented by The Woman of Samaria (Figure 38), by Wood, which isa hand some dark blue plate, and there are other designs by SI such makers as Adams and the Ridgways, who also put out religious subjects. There are patterns on cups and saucers which interest collectors, and though they are not so easy to display as flat ware, still they do not take so much room as jugs. Wesley appears not only on cups and saucers, like the one shown (Figure 39 which, although modern, being printed in 1891, is al ready quite rare, but in Staffordshire busts, some of them nine inches high. Such are to be picked up occasionally, and I saw one the other day at auction go for twenty dollars. Washington china, that is, scenes and pictures of £S? Washington himself, command the attention of col lectors who do not mind paying fancy prices for the old blue. Everything connected with Mount Vernon has an interest for all of us, and though we may not all buy such fine jugs as the one given in Figure 40, we would like to. 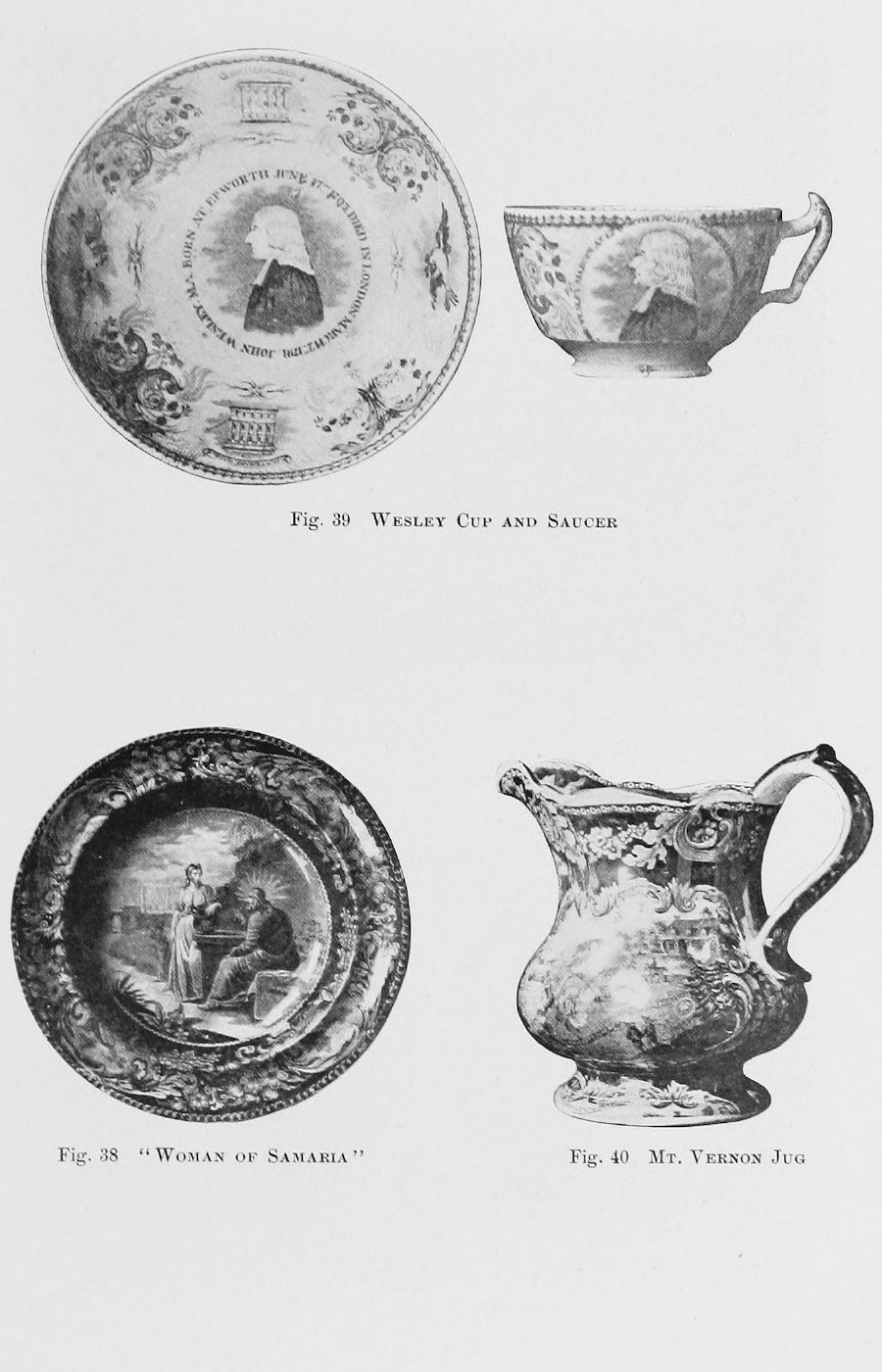 Other patterns of Staffordshire ware which are immensely popular among the collectors aa'Iio do not mind giving large prices for their hobbies are the Dr. Syntax and Wilkie designs and those referring to Don Quixote. Just why the last-named series does not command the same high prices as even the Wilkie set cannot be explained. It is by Clews, is well printed as a rule, has a s-ood border, and is not half so gross as the Wilkie set, one of winch is given in Figure 41, and which is called " Playing at Draughts." 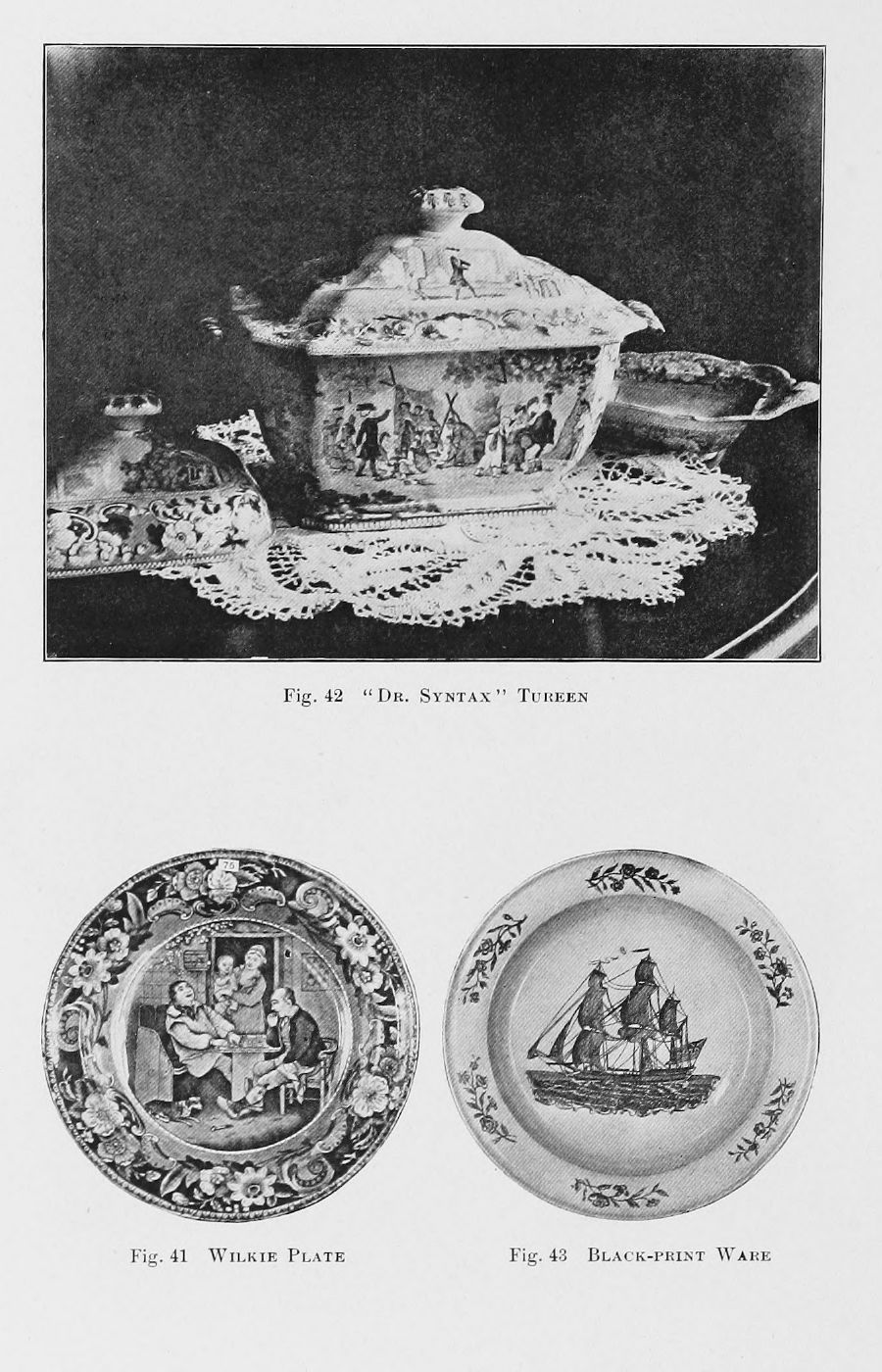 There are many reasons why the Syntax designs have such a great popularity, one of them being that love for the grotesque which is latent in almost every one of us, another being the interesting facts in connection with the production of these drawings and the accom panying verses, and third, the beauty of the printing of the pieces, which were made by the Clews in their very best style.

The drawings by Rowlandson were made about 1810, and the verses were reeled off, to accompany them, by William Comb, a most prolific writer of all kinds of matter, which nevertheless was not profitable enough to enable him to pay his debts, since he was an inmate of the King's Bench debtors' prison for twenty-three years, and it was in that far from cheerful spot that he wrote the lines for the three tours of Dr. Syntax, the first one, " Tour in Search of the Picturesque," being followed by " Tour in Search of Consolation," and the third, " In Search of a Wife."

The designs were made on china between 1820 and 1830, and the prices realised for this printed pottery seem marvellous. Twenty to forty dollars for plates, one to three and four hundred dollars for platters, seem too high figures to be maintained, but so few of tliese pieces remain to be picked up that it is thought that the prices may go higher still. The dishes sliOwn in Figure 42 have scenes on them from all three Tours, the one showing so plainly on the side of the

" tureen being Dr. Syntax and the Gypsies "; the verse which accompanies it is as follows:

"Patrick, unwilling to be idle, As he held Phillis by the bridle, With half a score black eyes around him, Darting their glances to confound him, Thought, while his master chose to trace The history of the Gypsy race, It would be ungallant, nay wrong, Thus to stand still and hold his tongue . . . Well then, these brown ones did not wait For him to open the debate . . . They jabber'd forth that they were willing To tell his fate for half a shilling. Pat smiled consent, his sixpence paid, trade." And thus the witch commenced her And so it goes on. One of the designs which com Pond," mands the highest price is called " Pat in the to which retreat he had betaken himself to rid him self of " Bugs or fleas, whate'er they be,