Their stings have played Old Nick with me." As might have been expected, when it was found that this china brought such large prices, counterfeiters set to work and made spurious copies of " Dr. Syntax telling the Bees," " Dr. Syntax painting a Portrait," "Dr. Syntax taking a Gentleman's House for an Inn." This has, of course, made collectors very chary of buying any of these patterns, since it has lessened even the price of the genuine ones.

At Liverpool there have been potteries since 1600, and the first wares were, of course, excessively crude, and A\'ere blue and white, in imitation of the Dutch, who in their turn copied from the Chinese.

Very little of the " Liverpool Delft," as it is called, can be found here, and it is chiefly in the form of tiles. There is, however, much other Liverpool pottery, com monly known as " black-printed ware." It is very decorative, of small cost, and good to have in a col lection or for ornament merely. Printing on china was a Liverpool invention, perfected about 1752 by a man named John Sadler. By this process the production of decorated china was materially lessened in cost, since, previously, all the decoration had been done by hand. The body of Liverpool pottery, that the pasteis, itself, fine cream colour, very even in tone and very is a light in weight. Figure 43 shows an exceedingly popular pattern, and have found these plates all over the country, sometimes even set up in museums with high-sounding names applied to them. Although they are nice and interesting, they are not worth more than one dollar and a quarter. 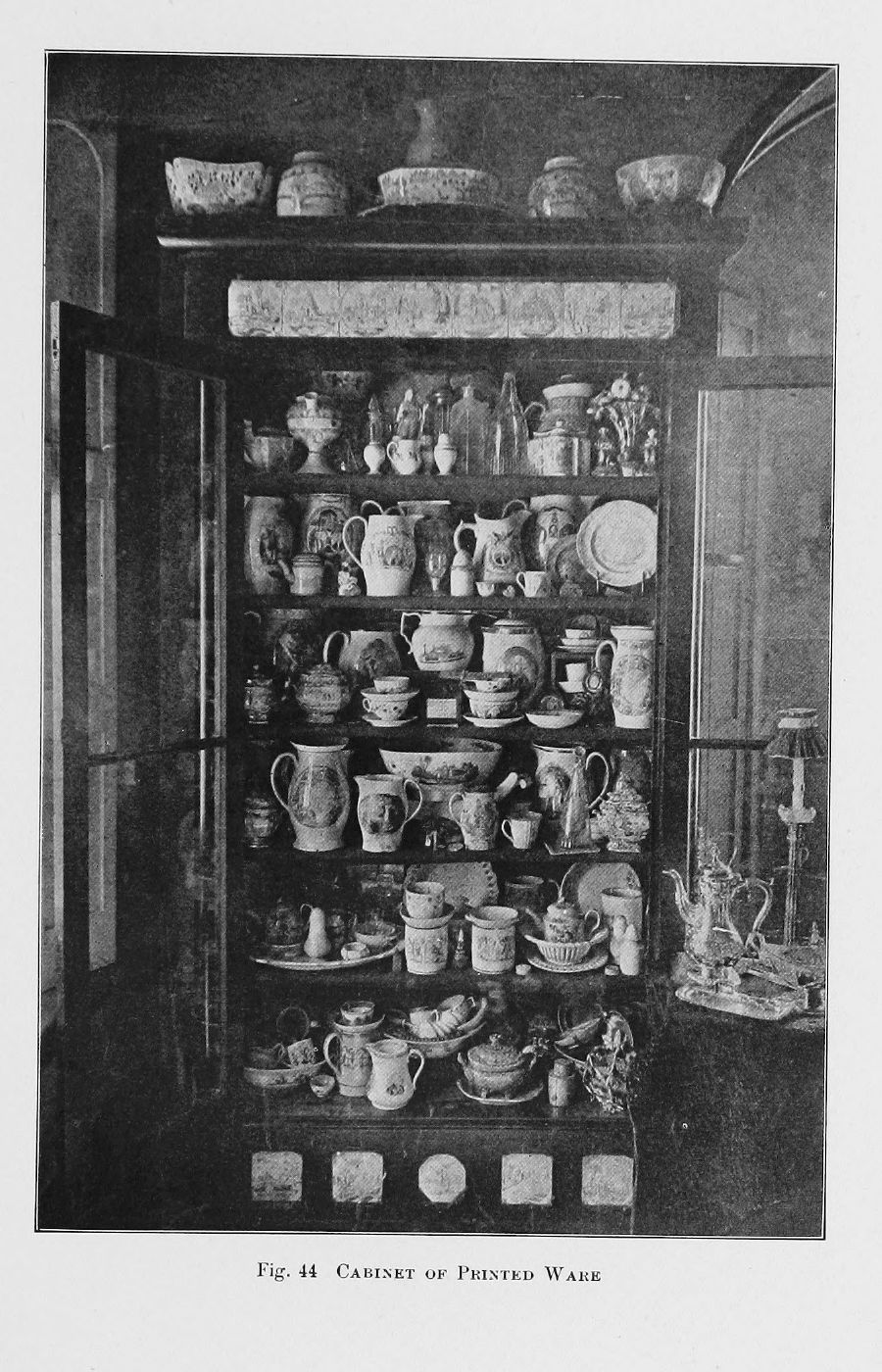 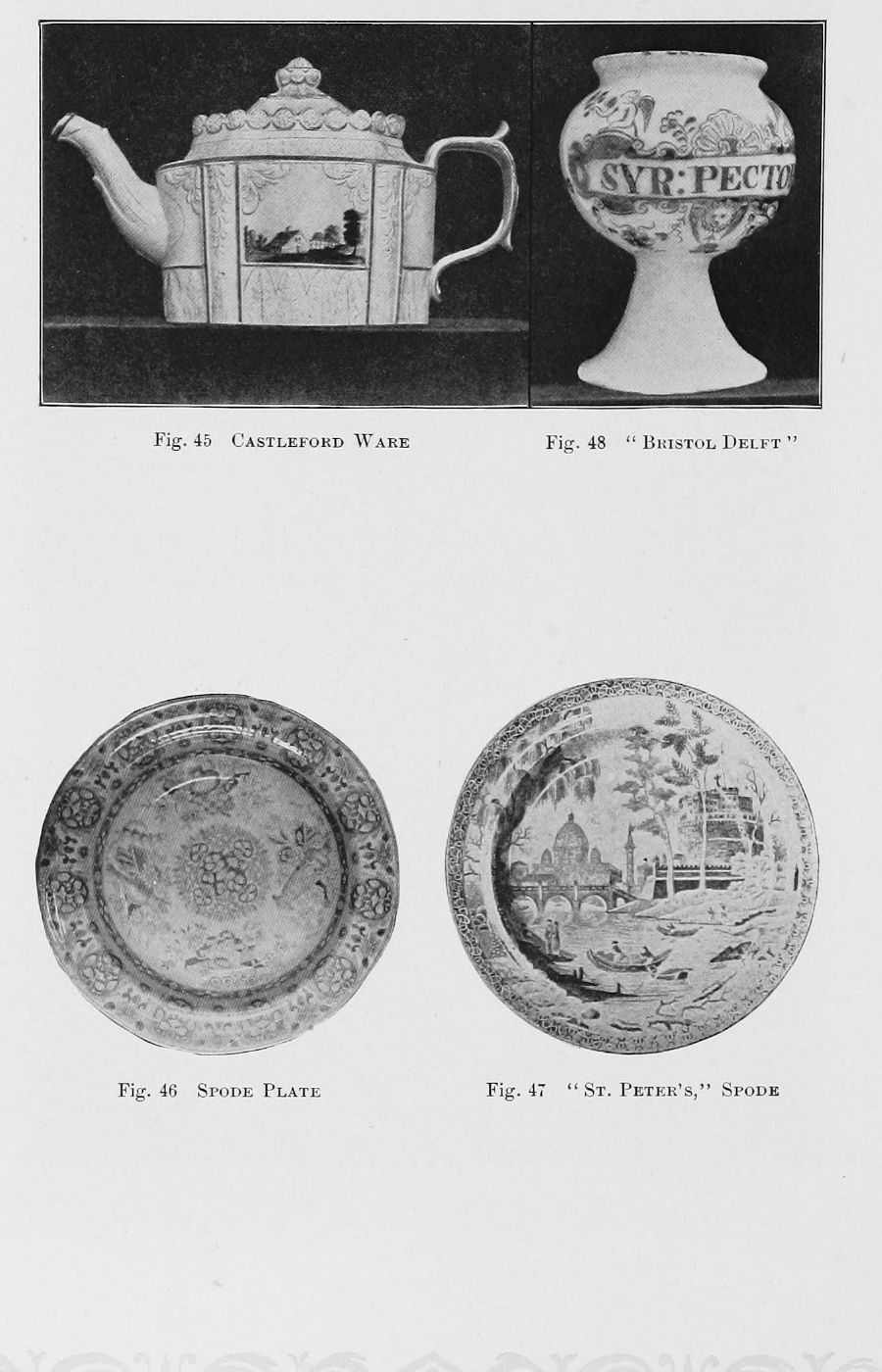 But while such a piece as this is reasonable, you may spend almost a fortune on printed wares, particularly if you get together such a collection as that shown in Figure 44. Each one of these pieces is a treasure, and many varieties of English ware are here shown.

During the last quarter of the eighteenth century there was started in the town of Castleford, near Leeds, England, a pottery from which was sent out much basaltes (black ware), Queen's ware (cream coloured), and a white pottery known as Castleford ware. These works were closed in 1820, and the white ware for which they were chiefly noted was no longer made. A quantity of this ware was sent to this country, and the pieces which seem to have survived are the teapots. They were made not only with the lifting lid, like the one in Figure 45, but with the lid fastened with metal pins. As can be seen, the ware was extremely pretty, with a wreath of graceful or nament, and this specimen is unusual in having a panel decorated in colours. Even less common were the pieces decorated with portraits of Washington and Franklin, which were in medallions, either in plain white relief or on a blue background. I heard from the Owner of a pitcher with such medallions only a few days since. Sometimes the surface of this Castleford ware is pitted much like saltglaze ware, but this was caused by hav- ing the inside of the mould thickly set with small points, which left corresponding depressions on the surface of the object.

The name Spode always stands for what is good and advisable to have. In 1770 Josiah Spode, then about forty years of age, began working as a potter. All the ware which he made is called " Old Spode," to distinguish it from the later product of the factory, and it is extremely valuable. His son succeeded to the factory at the death of his father, in 1797, and about 1800 commenced to manufacture stone china, and a little later to make porcelain. William Copeland be came a partner in the firm in 1797, and it is his descendants aa-Iio manufacture pottery and porcelain at the present time. Old Spode is marked " Spode," in printed letters, impressed. This mark is prior to 1797. From 18 to 1827 the mark is impressed or painted" on in red, blue, or purple. Occasionally Stone China " or " Feldspar Porcelain " is added. Jasper ware, black ware, and the decorated ware, in blue, red, and gold, and made by Josiah Spode himself, are valuable. After 1827, when the younger Spode died, the firm name was entirely changed, and

Spode." if Spode was used at all it was put " Late I give two examples of the second Spode, — one a plate, with decoration in medium blue, and the other a very beau tiful one of " St. Peter's and the Castle of San Angelo, Rome" (Figures 46 and 47). !*

The town of Bristol, England, was one of the first to take advantage of the growing popularity of pottery ware, Bristol Delft it was called, and there are records of work at that town as early as 1706. The drug or medicine jars were one of the early products, and in the specimen given (Figure 48) the earthenware body is covered by a stanniferous glaze, and the decoration is in a gray blue. It was not long before the ware was greatly improved, and they were making such pieces as the plate shown in Figure 49. Bristol porcelain and that made at Ply mouth, the manufacture of which ceased at both places before 1800, has such a value and is so rarely to be found in America that we will not linger on it. 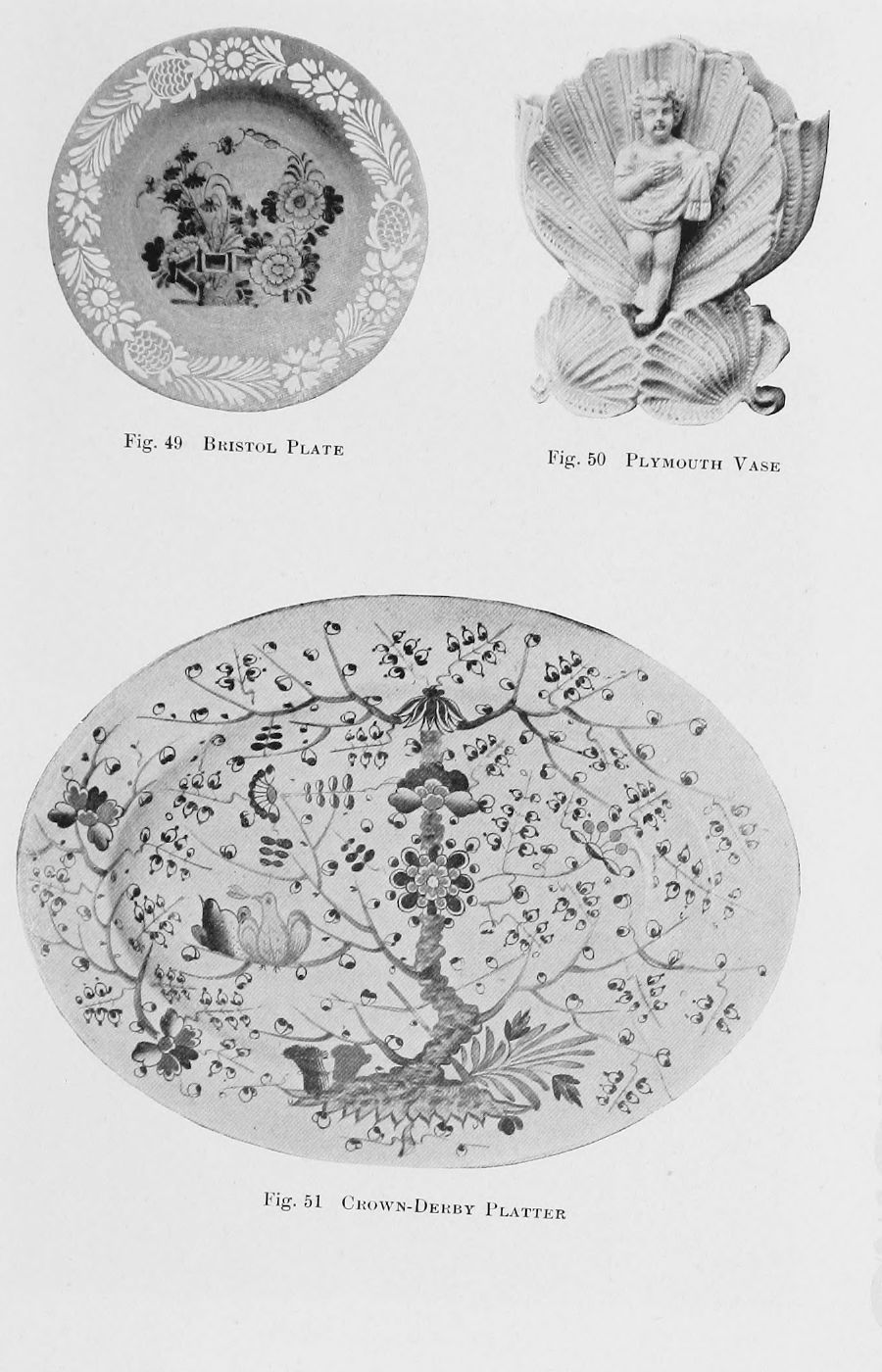 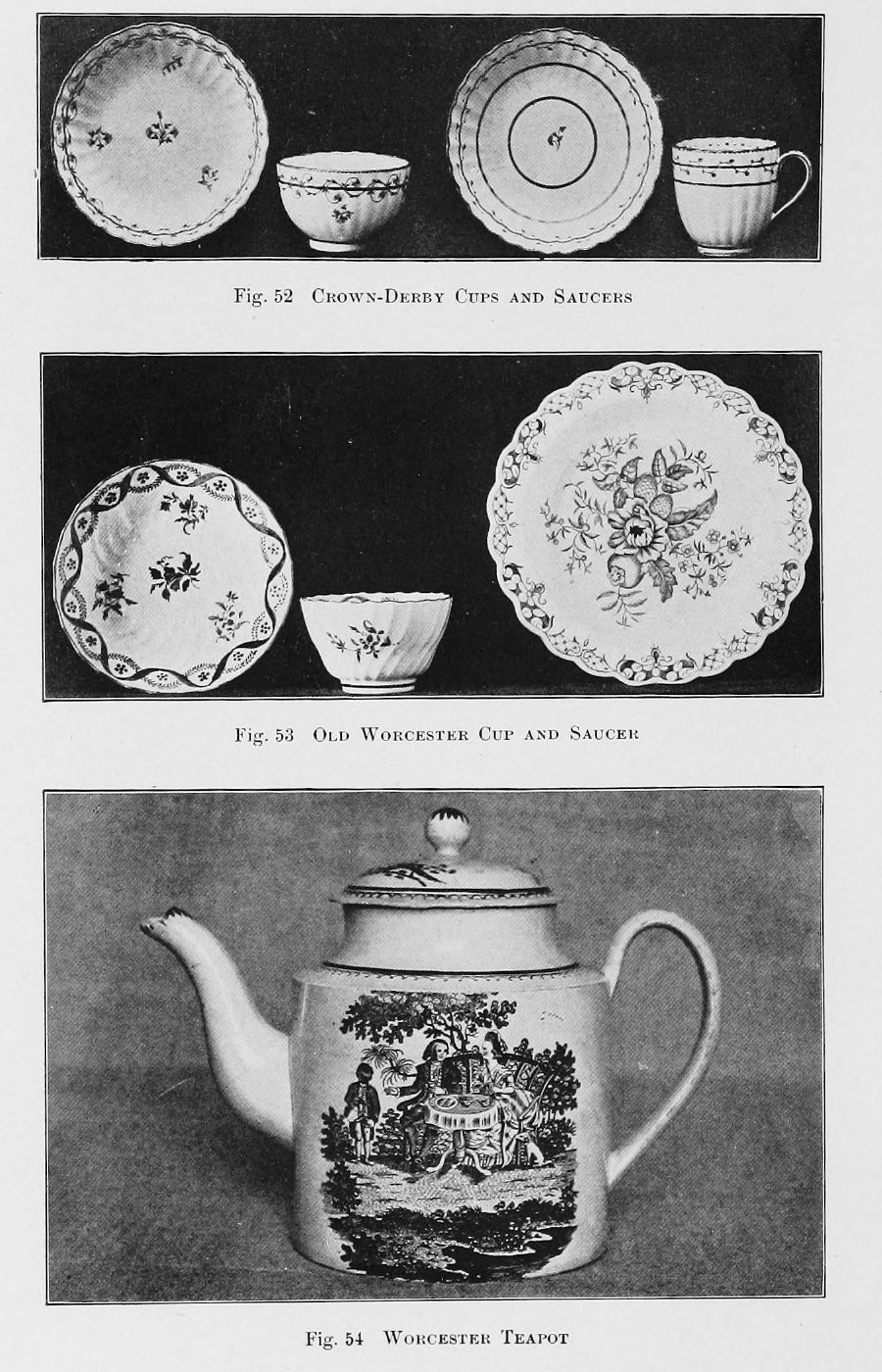 In Figure 50 is given a vase of Plymouth porcelain, which was formed in a mould, and is of that brilliant milky white which was such a marked feature of this porcelain.

More easily to be obtained, though just why one cannot say, are specimens like that shown in Figure 51. This is a twelve-inch platter of Crown-Derby porce lain, marked with the crown and " D " in vermillion, which places its time of manufacture at about 1788, what is known as the second Duesbury period. In the limited space of a single chapter it is impossible to tell, even in the most concise manner, the various changes and the different hands into which these old potteries passed. It is enough to say that any of these early specimens are choice, and it is very seldom that they come under the head of " bargains," like the little platter shown. It is painted in the familiar reds and blues, with sparing touches of green, and some gold, and it and another two inches larger were recently bought in Rochester, New York, for five dollars each.

I can hardly bear to think of these platters, for as I hesitated a moment the one shown was bought, not by a collector, but by one who liked the pretty"colour ing." The owner herself put the price upon them, but they are worth many times this sum, and would be eagerly bought if the present Owners could be induced to part with them.