Some Crown-Derby cups and saucers are also shown (Figure 52), rather less ornamental in pattern than the little platter, but still bearing the old crown mark.

In the following illustration (Figure 53) is shown a cup, saucer, and plate of Old Worcester porcelain, which must not be confused with " Royal Worcester," —a modern ware which has flooded this country for years and has many imitators, both professional and amateur.

The Worcester Old Works were started in 1751, and remained in operation till 1847, though they passed through many different hands. Blue in a cobalt or turquoise shade, and also enamel blue, made the Worcester porcelain very much in demand, and a very high-class transfer printing was made here also, the designs for which were made by two artists, Richard Holdship and Robert Hancock. Both these men had a way of signing their drawings " R. H." in a mono gram, thereby producing endless confusion and much wathy discussion among china collectors of the pres- ent day. Figure 54 shows a teapot decorated with one of the well-known designs of Robert Hancock. I have heard it called " General and Mrs. Washington having tea at Mount Vernon," the presence of a small black boy near at hand helping out the idea. It is an English scene, however, and it was the fashion of those days to have pages, either black or white, con stantly at hand to do the bidding of my lord or lady.

This teapot is one of a collection which is creeping up to two thousand, the majority of which were ob tained in this country. The cup, plate, and saucer are museum specimens, and are at Boston. They are painted, not printed, the decoration on the plate being that shade of gray blue known to the Oriental as "sky seen through clouds after

The history of the Worcester potteries since they were first started by Dr. Wall, in 1751, is a long and interesting one. At one time and another there have been, besides the " Old Works," Chamberlain's Works and Grainger's Works. In 1902 all the companies which were still in existence were taken over by the "Worcester Royal Porcelain Co. Limited," and it is through the courtesy of that company that I am able to show specimens of Worcester transfer printing, which was made about 1756, when this style of work was first done at that place. Its clearness and beauty is plainly to be seen from the photograph (Figure 55) . 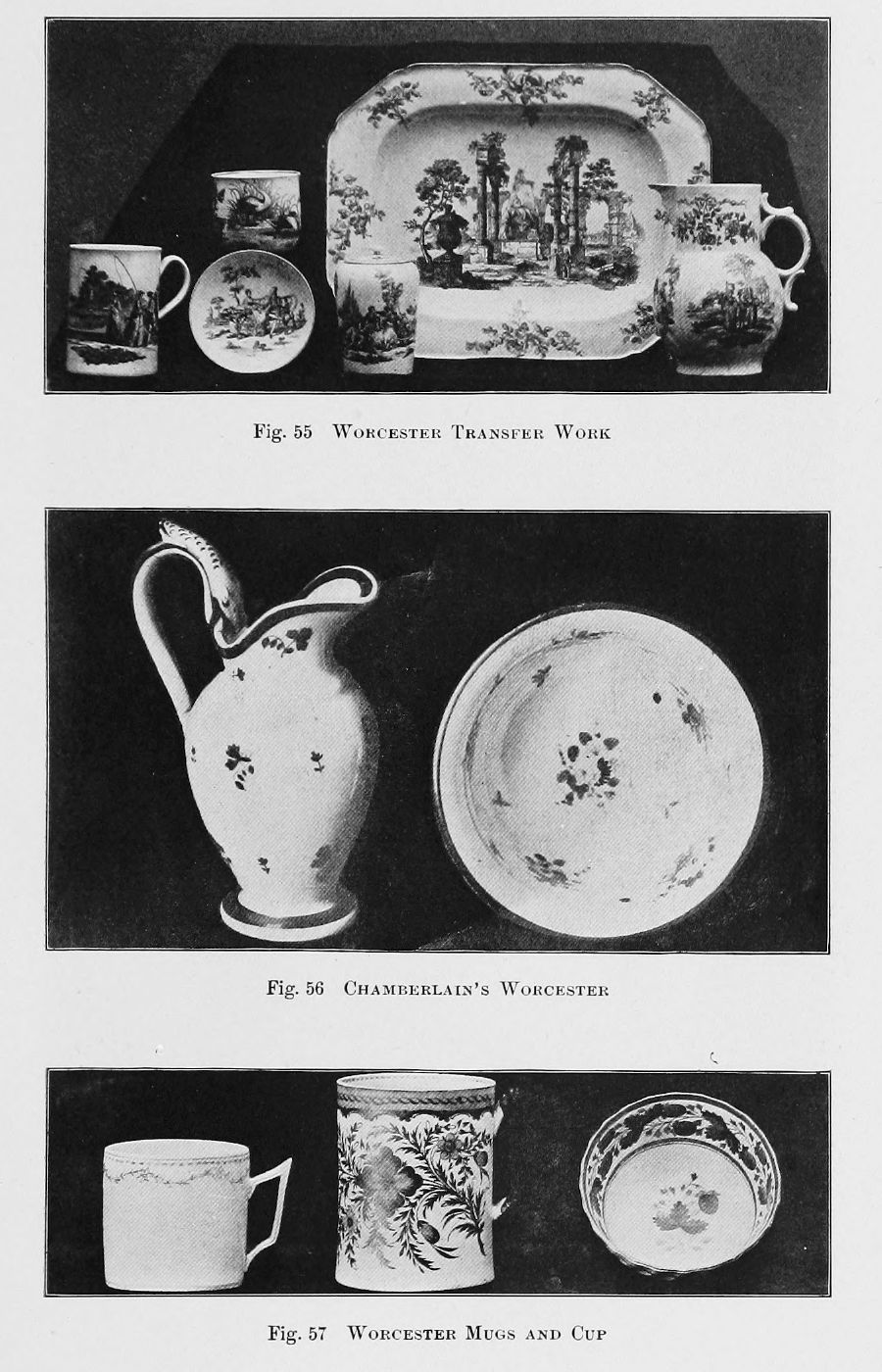 Specimens of Chamberlain's porcelain, and some mugs, and a cup of the early Worcester are also shown (Figures 56 and 57).

Within the last year, at Cooperstown, New York, a quantity of old porcelain has come to light. A farmer was ploughing, when suddenly the plough struck some hard substance, and a moment later there was a crash as of broken crockery. Investigation proved that he had struck a wooden chest, filled with china articles. There were eighty pieces in all, and fifty were saved in a perfect condition. As for the chest, it had crumbled to bits on exposure to the air, only the rough iron lock and hinges surviving. The history of these specimens is known. They were buried one hundred and twenty-five years ago by Percifer Carr, who was employed by Colonel Edmeston, an officer in the French and Indian Wars. The Colonel received for his ser- W Adces a grant of one thousand acres, and Carr had a comfortable home on this land. Indian troubles caused him to leave for a time, and he buried his china. Among the pieces are some very choice Old Worcester, with both Hancock's and Holdship's designs, very similar to the teapot shown. Other pieces are in plain blue, and in brown and pink.

The farmer aa'Iio ploughed up these treasures, for they are almost as valuable as gold, has not been allowed to retain them, as he only rented the farm. The Owner of the property stepped in and claimed them, and after they had reposed in a bank under the care of a sheriff for some months, the court upheld his claim. Collectors from all over the country have been interested to have them come on the market.

In Figure 58 is given one of those lovely graceful creamers which go by the name of Helmet For Over half a century such pitchers and other china of similar paste and decoration have gone under the name of " Lowestoft," and have been the delight and pride of hundreds of collectors. It is only within the last few months that it has been definitely decided that no such ware was either made or decorated in Eng land, but that it is entirely of Oriental manufacture. At the little English town of Lowestoft have been unearthed fragments both of moulds and bits of pot tery, which go to prove that the ceramic products of that town were no different from what was made in other English towns at the same period. 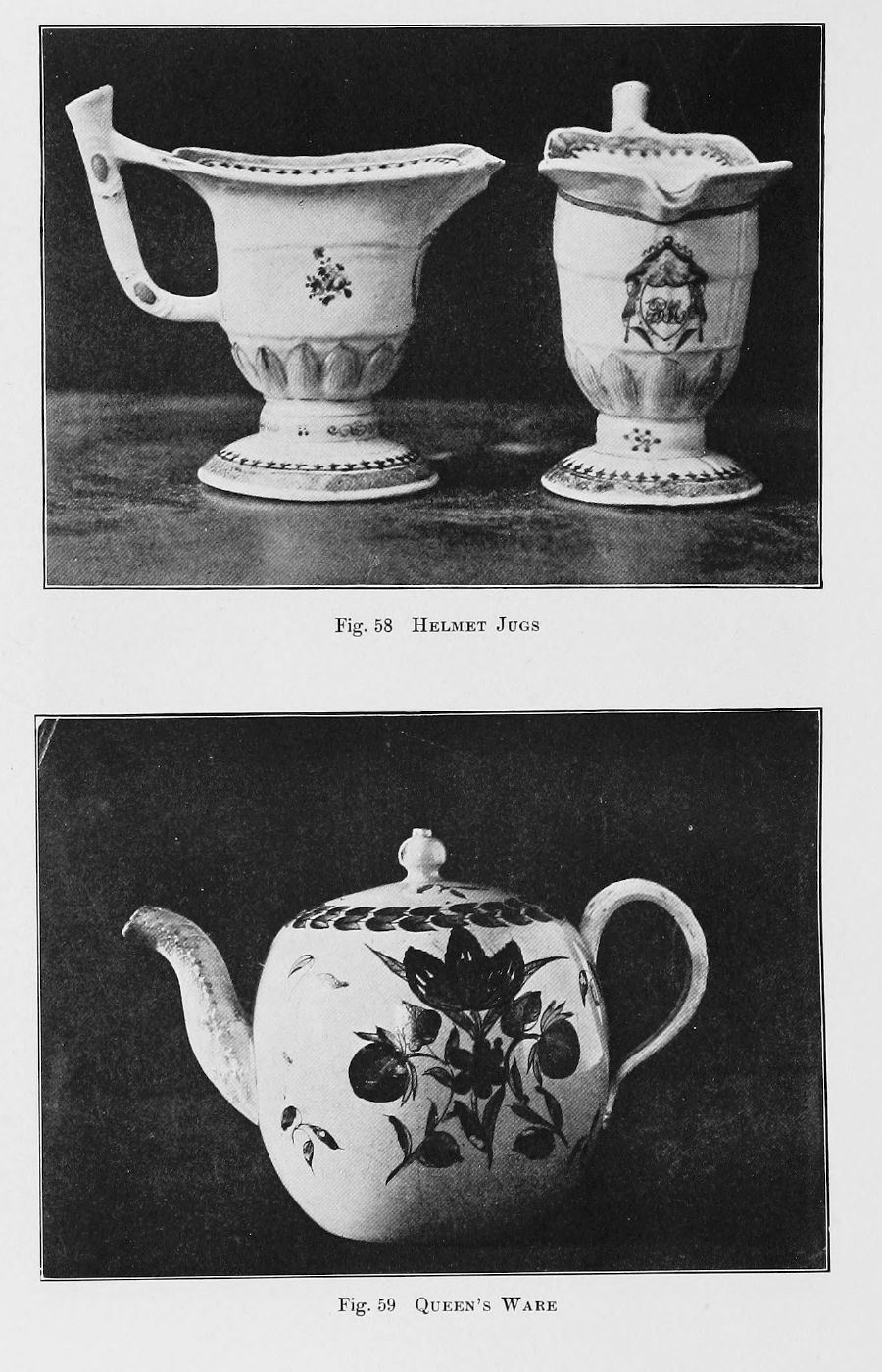 So now all this fine bluish white pottery, with its birds and flowers and coats of arms, comes under the head of " armorial and it has not lost in value nor in beauty, if it has taken a less high-sounding name.

Lovely as are the porcelains of Chelsea, Derby, Bow, Plymouth, and Worcester, as mere artistic productions, they yield the palm to the work of one man. None of these porcelains mentioned were the product of a single mind; they were the result of experiments by many.

On the other hand, the great Wedgwood invented most of his own products, formed the first specimens with his Own capable hands, and directed and controlled those vast works which were the growth of his own genius. He disputes with Palissy for the position of "greatest Specimens of Wedgwood's wares are to be found in this country, and within the past year I have come across a cup, saucer, and plate with brown-printed jessamine border for decoration; a tray for fruit of the early rich green glaze decorated with strawberries l\3 and leaves, and a vase twelve inches high, of the black encaustic ware, dull finish, with beautiful classic figures on it in red, and a handsome egg-and-drop border enhanced with a little white enamel. Each of these pieces is marked, and the vase is numbered as well. The cup, saucer, and plate were bought for two dol lars; the fruit tray was got of a Polish Jew for a quarter, the purchaser believing it to be some modern majolica, and selecting it solely on account of its colour. The vase sawIstanding on the mantel-shelf of a house where there are many choice and beauti ful objects. In reply to my questions the hostess answered:

'Yes, it is a nice old vase. We 've allways had it as long as I can remember. It has been mended, for it was knocked on the hearth once in dusting." She did not know who made its value, or anything, save "it." it, they 'd always had Yet on the base of the plinth was the name Wedgwood clearly and neatly cut, and beside the number 34. The vase had not been broken, it but the fall had loosened the plinth from the body of the vase. These two parts were joined together by an iron screw and nut, and the latter had apparently rusted out. The repairer had simply put a new brass nut on the old iron screw. It was quite impossible to resist dilating on the beauty and rarity of this vase and its value.

When next I saw the owner she said: "What you told me about our black vase has de stroyed my pleasure in it!"

"Why?" I asked. "Since I knew it was so valuable I 've been ner- Arous for fear it will get broken, and have locked it up in the cabinet, and now we cannot enjoy it at all!"

WedgwOod's products are easily and clearly grouped. He never made any porcelain. Nor did he ever pro tect any of his valuable inventions, save in one case, but allowed his brother potters to benefit by his experiments and to reap the reward of his labours. His earliest wares were the tortoise-shell and agate pottery, and the highly coloured green glaze already referred to."

Then came the perfected cream-coloured or Queen's Ware," like the teapot in Figure 59, either decorated or plain. The name " Queen's Ware " was given to this pottery in honour of Queen Charlotte, who vis ited the pottery works and admired it. It varies in colour from pale cream to almost a deep straw or sulphur yellow, and has an admirable clearness of tone, which makes it a very good background for decoration.