As early as 1761 Wedgwood was making teapots, and in fact whole sets for either tea or dinner, for caudle as well as for many other uses, and all in this ware. It wasnot expensive, for a dinner set of one hundred and forty-six pieces cost at wholesale about twenty dollars. That some of these sets came over here is well known, for, artist though he was, Wedg wood was a man of business as well, and did not neglect any market, particularly such a promising one as the American Colonies offered.

Wedgwood's, following, for instance, where James Gilliland, dealer in earthenware, Delft, and glass, with a shop in Wall Street, New York, enumerates " enamelled and cab bage teapots " among other goods. This was as early as 1760. Not only was this cream-coloured ware painted, but it was printed as well, and so beautifully and care fully executed that it was almost as handsome as if painted. Perhaps the thing in which Wedgwood took the most pride, and naturally too, was the dinner set made for Catherine II, Empress of Russia, for use at the Palace of Grenouilliere, which was a part of Tzarsko- Selo, near St. Petersburg. The commission was ar ranged through Mr. Baxter, who was English Consul at St. Petersburg at the time, and in June, 1774, the set was finished. The firm of Wedgwood and Bentley, as it was at that time, considered it of sufficient im portance to advertise it, did it: and this was the way they

"Wedgwoodand Bentley inform the Nobility and Gentry, that those who chuse to see a Table and Desert Service, now set out at their new Rooms, in Greek-street, may have free tickets for that purpose, at the ware-house in Great Newport- street, and that none can be admitted without tickets."

All the world flocked to see the set, and many have recorded their impressions about it. The designs used to ornament it were English country seats and land scapes, and as soon as the ware was made at Etruria it was sent to Chelsea to be painted, where Wedgwood had gathered the best pottery painters of the together day. There were 925 pieces, each one of which had a different scene on and on the underside of each it, piece was shield, enclosing a green frog. a A few duplicates were made, and some pieces which had im perfections were set aside. Some of these duplicates are in museums, and the plate shown here, Moore Park (Figure 60), from the collection of Mr. E. J. is Sidebotham, of England, who the fortunate pos sessorOf of three pieces. is the original set nothing known now. But is it seems impossible that so many hundred pieces should have disappeared, even in Russia. Collectors are al ways hoping that will turn up in some corner of it that great and distracted empire. 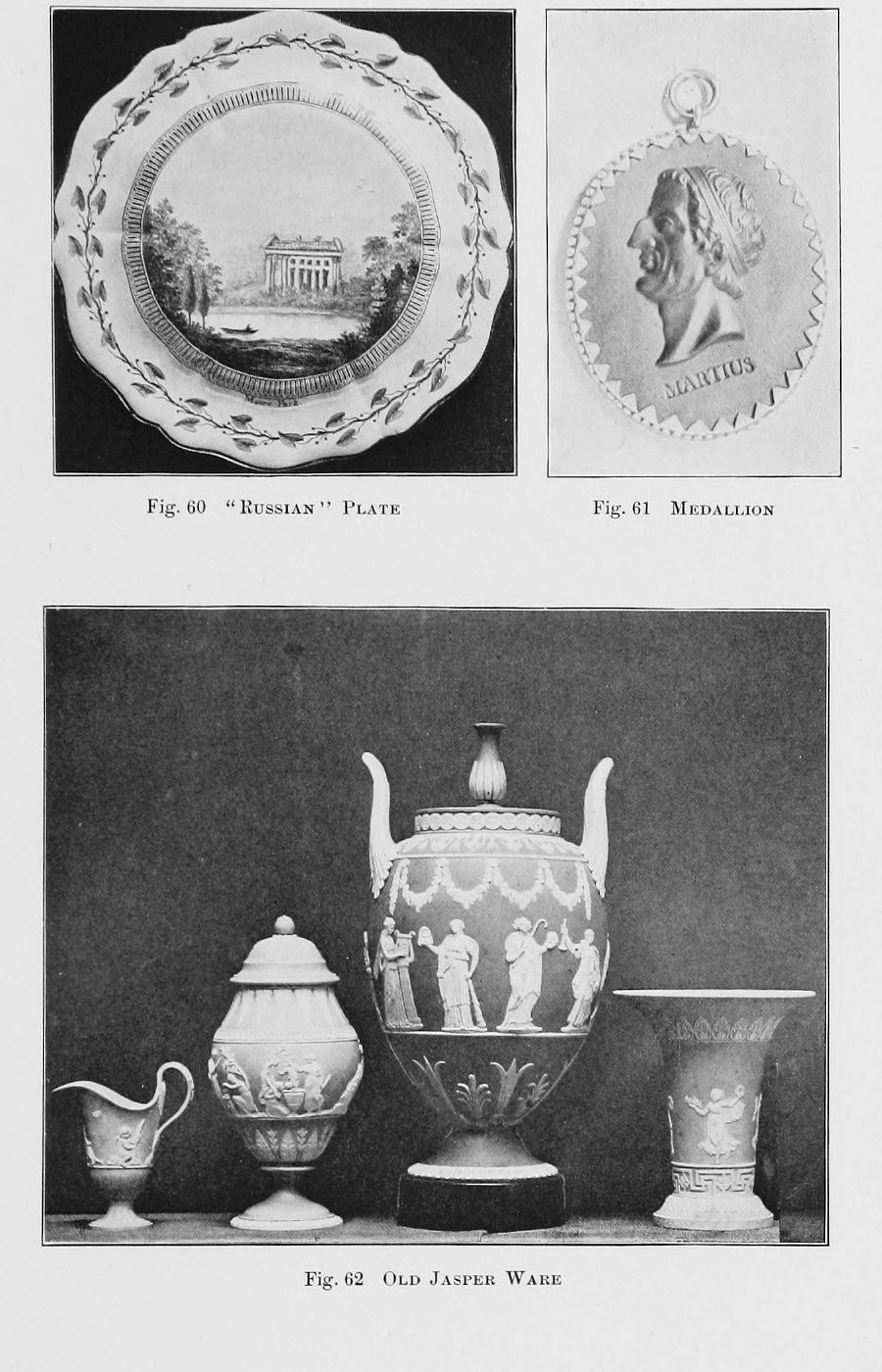 Then Wedgwood perfected black ware, or basaltes, — a form of pottery long Ioioaaoi, but never brought to its highest excellence till the master potter turned his attention to it. He used this basaltes in many ways, — for vases, portrait medallions, teasets, and for special use in the " Colonies," in the form of small round inkstand, which, according to the maker, had manya advantages over any other inkstand then on the market.

In Figure 61 is shown a portrait medallion in basaltes set in sih'er, which brings out admirably its veh'et blackness. These medallions are splendidly finished, being cut by hand after they were taken from the mould, so as to bring out the head sharply from the background and make it perfect in every detail. Some of these exquisite heads and figures are small enough to be set in a ring or an ear-drop, while others are four by three inches. The most common size is two by one and three-quarter inches, like the one shown. When the name of the subject of the medallion was printed on the front, the name Wedgwood was scratched on the back. When the name of the sub ject is not given, then Wedgwood is often impressed on the front.

People often tell me that they own Wedgwood. I always ask, " Is it marked? " You may set it down" as a rule that all real Wedgwood, that is, Old Wedgwood," is marked with his name. It was trial pieces only, and such as escaped the workman's notice, that left the pottery unmarked. There are peculiari ties about this marking, too, which must be noted. The name, in small capitals, is always clearly and carefully marked, whether impressed or printed in colour. " Old Wedgwood " is that pottery made before the decease of Josiah Wedgwood, in 1795. The firm was con tinued and is still potting, but the cunning of the master's hand has left the work. After 1795, besides the name Wedgwood, other marks were used. Three letters, like R. S. A. T. etc., and others in combination were frequently seen, and there were arbitrary marks as well to indicate special patterns and periods.

Greatback and Hackwood, two of the best modellers in the time of Josiah Wedgwood, sometimes put their initials on the back of a piece, but Wedgwood ob jected to this, and suppressed such marks as much as possible. Undoubtedly the highest and finest product made by Wedgwood was, in the estimation of the public, his jasper ware. He calls it " a white porce lain bisque of exquisite beauty and delicacy, possessing the quality of receiving colour through its whole sub stance. This renders it peculiarly fit for cameos, por traits, and all subjects in bas-relief, as the ground may be made of any colour throughout, and the raised figures are in pure

Of the pieces shown in Figure 62 little need be said, since their beauty is so obvious.

Many of the figure subjects used on jasper vases were drawn by John Flaxman, who became celebrated for his drawings of classical subjects. At the time he entered Wedgwood's employment he was a poor and unknown young man, and it was due largely to the encouragement and liberal payment given by Wedg wood that Flaxman became as well known as he did in after years. Every ornament and slightest detail that came from the Wedgwood potteries prior to 1795 was finished with the greatest care. Nothing slovenly