Two correspondents, one in Mexico (where, she writes me, there is much old china to be picked up) and one in Virginia, own large gallon pitchers of plain copper lustre, very similar in shape to the largest pitcher shown.

The second period of copper lustre was about 1830, when the glaze was inferior, being filled with bubbles and little holes, showing that the pieces were hastily dipped and stood on their bases, where the glaze col lected in drops. Since this time copper lustre has been made in quite a number of potteries, and modern lustre can be found easily in Canada, I understand. There seems to be little in the United States, for I have sought in dozens of stores without coming across one pitcher. Whole tea-sets of a certain brilliant lustre, with a band of bright blue, have been offered me as " antiques," every line and its hard, brassy colour showing in an unmistakable fashion its recent manufacture.

There is a depth of colour, a smoothness of glaze, and "" a feel to old lustre that is not easily mistaken. You will find the bottom of the object worn smooth, the polish dulled by wear in places, and the crudeness of the modern ware absent.

The two pitchers in the centre of Figure 217 are of a more modern type than those on the ends with large curved lip and familiar handle. Sometimes such jugs come with a cover also of the lustre, which fits into the neck of the pitcher, and has a square opening so that the liquid can be poured out without removing the lid. Such pieces are very rare. It is a misfortune that such a small quantity of lustre ware of any description was marked. Its age can only be guessed at.

While copper lustre never reached an advanced state in beauty and perfection, sih'er lustre, as it is familiarly called, deserves a front rank in English pottery. It is not so old a form of lustre as the copper, and prob ably dates from not earlier than 1785. The process of producing this lustre was by applying a deposit of metallic platinum to the surface of either pottery or porcelain. Platinum was first introduced into England from Spain about the year 1750, and its reductibility and the ease with which it could be deposited were early known to chemists.

John Hancock, who was born in 1757 and died in 1847, claims for himself the first use on pottery of this substance. In 1846 he wrote to the " Staffordshire Mercury " a letter concerning this subject, of which a portion is quoted. He says:

"In the notice of the death of Mr. John Booth, inserted in your last week's paper, it is stated that he was the inventor of lustre for earthenware. I beg to state that this is incorrect, as I was the original inventor of lustre, which is recorded in several works on Potting, and I first put it in practice at Mr. Spode's manufactory for Messrs. Daniel and Brown, and con tinued to make it long before Mr. Booth or any other person attempted to do so. . . . By inserting this you will oblige me, whose character, at the age of eighty-nine, is at stake."

In Shaw's " History of the Staffordshire Potteries," 1829, he states:

"The first maker of sih'er lustre properly so called, was John Gardiner, when employed by the late Mr. Wolfe of Stoke. Next were Mr. G. Sparkes of Slack Lane, Hanley, Mr. Horobin of Tunstall, and a person named Mr. John Ainsley, who intro duced it at Lane End. Since 1804 it has been practised with varied success through the whole of the district."

In 1810 Peter Warburton, of the New Hall Pottery of Lane End, took out a patent for " decorating china, porcelain, earthenware, and glass with native, pure, or adulterated gold, sih'er, platina, or other metals fluxed or lowered with lead or any other substance, which in- vention or new method leaves the metals after being burned in, in their metallic state."

Among the names which may be found on pieces of silver lustre are, " Warburton," with a heart impressed; "Wilson," " Bailey and Harvey," " Spode," " Wood,"

13 193 "Minton," "J. E. Wileman," "Hariey," "Ralph Salt," — this was the same man that made Staffordshire fig ures, — "Wood and Caldwell," the Mayer star, and the letter " R," which is supposed to stand for Ridgway. But by far the larger number are entirely unmarked.

The process of making silver lustre was a simple one. The ware, when glazed, was dipped into a bath contain ing platinic chloride and dilute spirits of tar. It was allowed to dry, and was then baked for eight to twelve hours in a kiln at 1,200 F., when the organic matter burned away, leaving a surface of metallic platinum, lustrous and fine. Sometimes the platinum was mixed with the materials of the glaze and applied directly, and those pieces which have the lightest and most silvery appearance were coated with oxide of plati num produced with sal ammoniac, and fired at a Ioav heat.

Various bodies were used. Wedgwood chose a dark red clay, others a dead white porcelain, and I have seen also a yellowish bod}', and common gray clay. Origi nally the pieces, particularly tea-sets, bowls, and mugs, were lustred inside as well as out, for silver lustre was made for those aaIio wished to Own sih'er but could not afford it. In the course of time, when electroplating cheapened metal ware, and the lustre ware no longer deceived, the interior of vessels was coated with a white slip or porcelain glaze and the lustre was confined to the outside. This had the merit, also, of reducing the cost. The pottery body is of coloured earthenware, red or yellow, made very thick in such pieces as tea or coffee pots, to withstand the heat, while other pieces are nearly as delicate as porcelain. 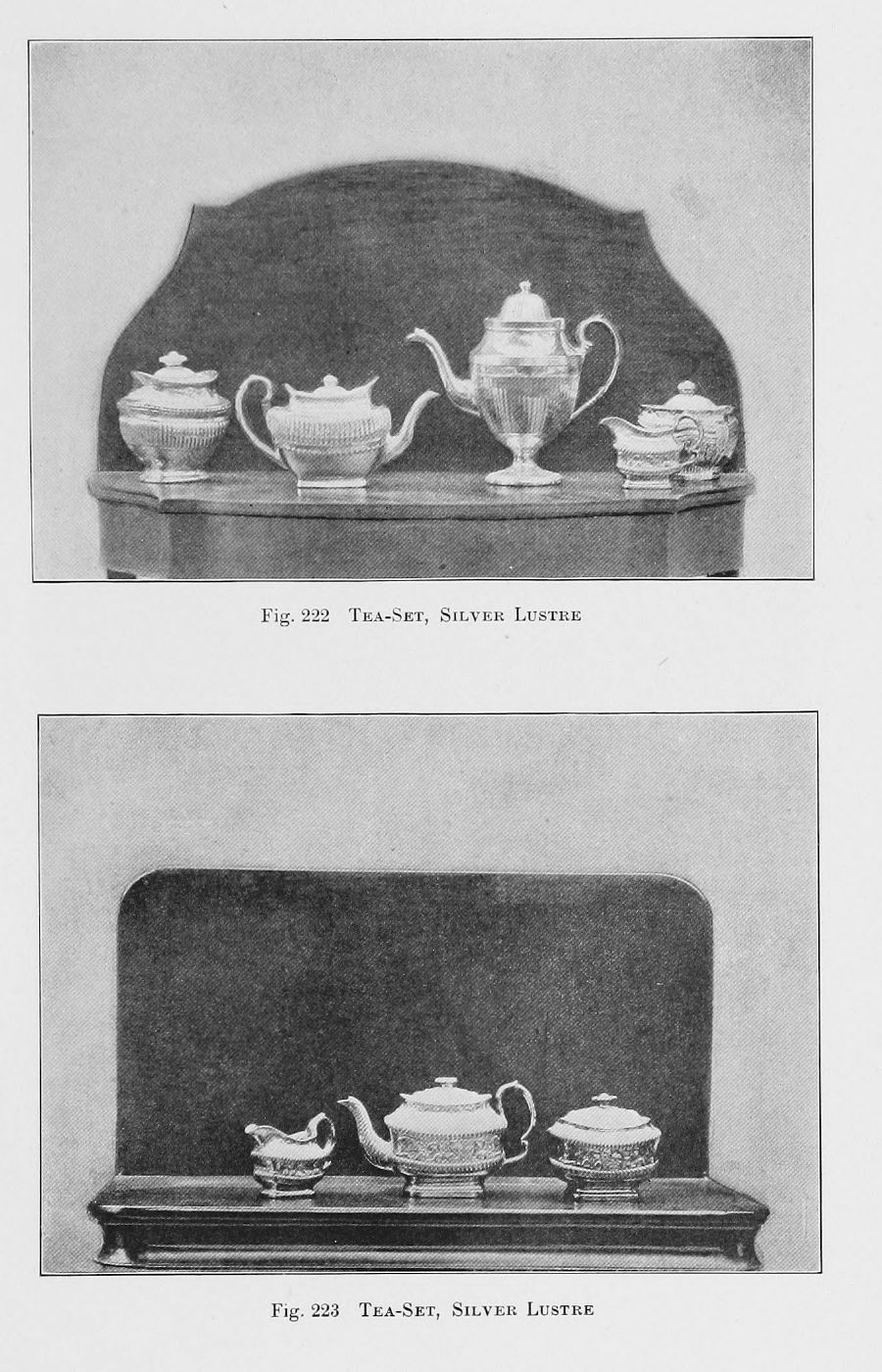 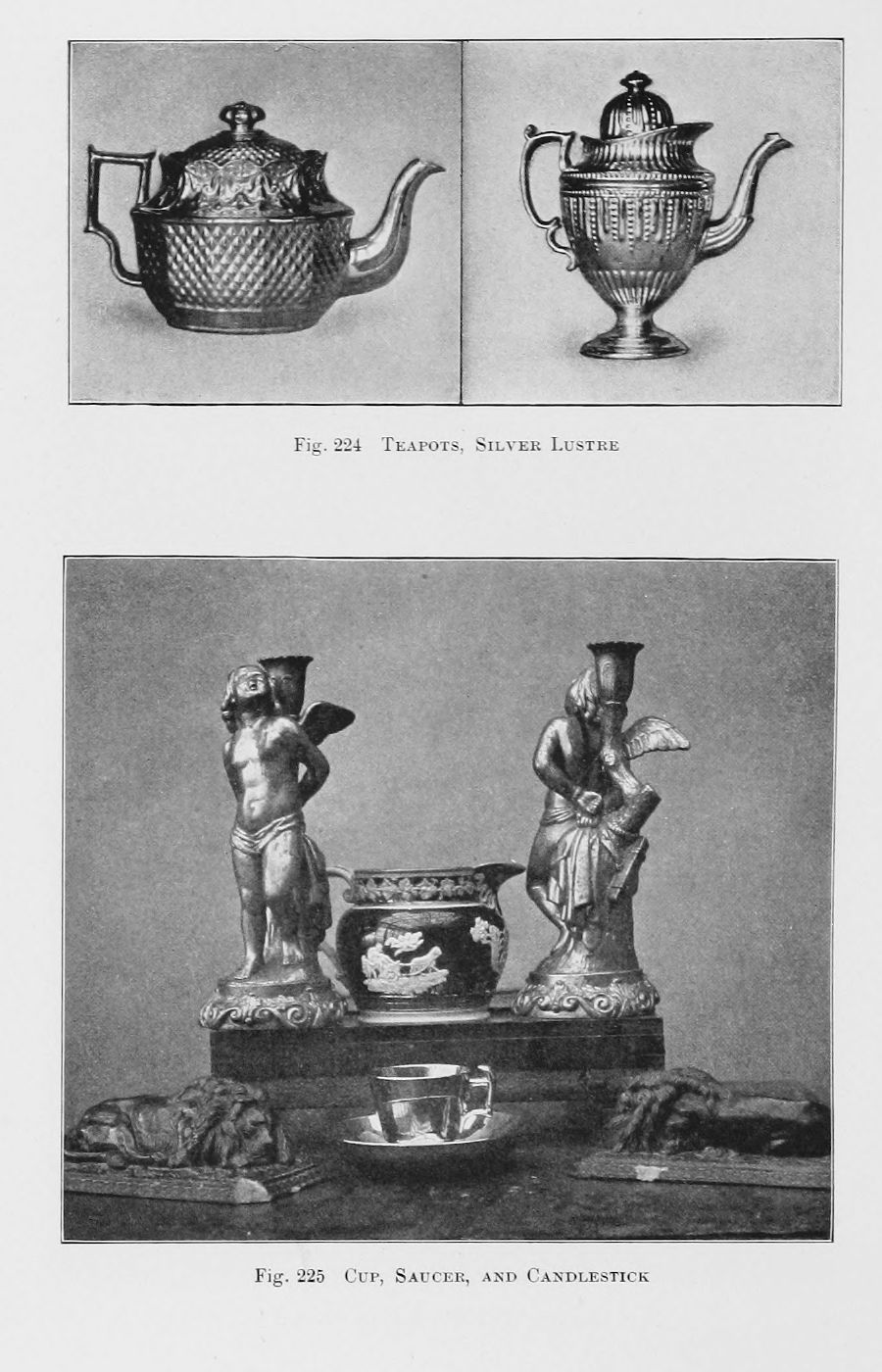 The early patterns, besides being silvered within, are also quite plain in shape, the beautiful ornamentation with which many pieces are enriched being a later de velopment. A choice specimen of plain silver lustre is shown in the fluted jug in Figure 220.

The tea-sets in Queen Anne patterns (see Figures 221, 222, and 223) and the two helmet teapots and the one with " pineapple " pattern shown in Figure 224 are extremely beautiful. Many such sets were cast in old silverware moulds, or modelled in flutings and headings by hand, the numerous examples shown covering almost every ATariety of known pattern. In fact, they are al most handsomer than silver, since the lustre takes a deeper shade, and is broken up into higher lights than is possible with even the most highly burnished silver. V Not only were there tea-sets, but cups and saucers as well. The only one I ever saw was a delicate bit with flutings on the cup, which was of an early type, since it had no handle. It was in perfect condition and sold for ten dollars.

A perfectly plain cup and saucer this time, with a handle, can be seen in Figure 225. It is a beautiful and perfect piece, and with the other articles in the photograph belongs to a Mexican correspondent. The two lovely candlesticks are of silver lustre also, " Cupid Bound," and are not marked in any way. They are, «£ however, very choice, the modelling of the figure being exquisite, and they are quite perfect, except that the jc^x lustre is a little mottled. In design they are quite as choice as the Wedgwood pair shown in another figure.

The largest piece of silver lustre which has come under my notice was an ewer and basin which I saw in the summer of 1903 at Salem, Massachusetts. It was of the diminuth'e size seen in the old blue toilet sets, —- tiny things, which seem to have satisfied our Colonial ancestors in whose estimation cleanliness does not seem to have come next to godliness.

Many people desire to have one or two pieces of silver lustre, but it is by no means easy to find, though many of the teapots shown in this article belong to a fortu nate collector avIio has two thousand other teapots of every variety of pottery and porcelain to keep them company.