At the sale, in March, 1903, of the late Mr. Burritt's collection of pottery and porcelain when such phe nomenal prices were obtained for " Old Blue," there were a few pieces of lustre sold also. The prices given for them seem large, but there were plenty of people willing and eager to take them at these figures. There were but two separate silver lustre teapots similar to the tall ones shown in this article. One of them, fluted, sold for $20. The other, plain, brought $18. A tea- set in fluted pattern, consisting of teapot, sugarbowl, and cream jug, brought $60. A silver lustre goblet sold for $11, a pepper box for $12, and a salt cellar, silver without and copper lustre within, cost the pur chaser $14.

It must be borne in mind that these prices are un- £^QS^ usual; no dealer will ever give them. Yet silver lustre seems to stand apart in value, for I have known a very choice teapot which had lost its spout to have the miss ing member replaced by one of plated silver and then sell for $15.

So far we have dealt only with plain silver lustre, or that cast in moulds.

There is another form of decoration for this variety of lustre which is uncommon and very beautiful. An example is given in Figure 226. I call this the second period, since the plain ware was evidently the first ex pression of the potter's ability to use this metal. All the shapes in which lustre ware was made — pepper pots, tea-sets, jugs, bowls, two-handled cups, and cups and saucers — are to be found in this decorated ware, which is called " resist " from the method of manu facture. Birds and flowers are the subjects oftenest chosen, the patterns often being exceedingly intricate and elaborate. 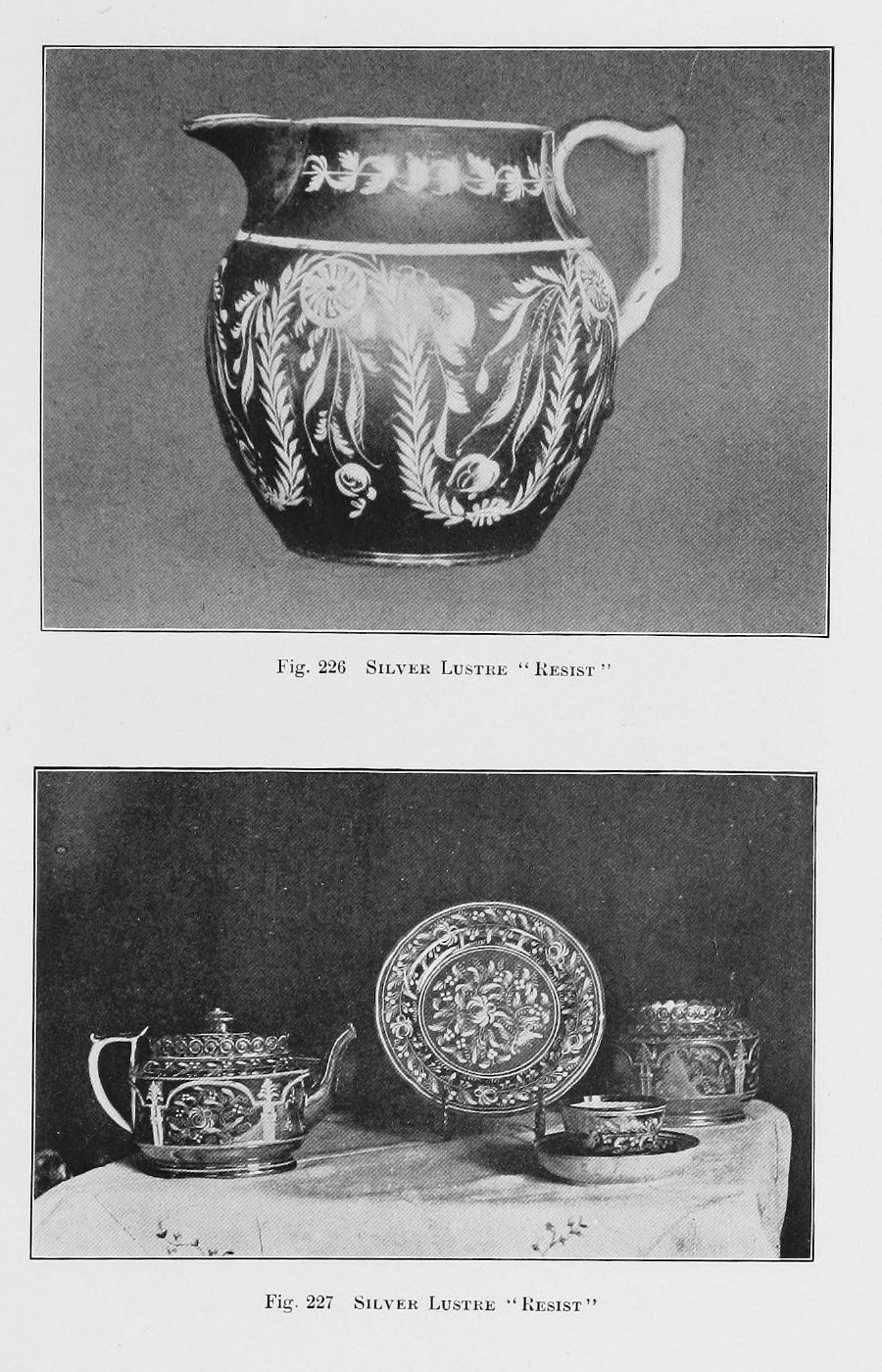 The article to be decorated was first dipped into or covered with a white or cream-coloured slip, and upon this the pattern was painted with an adhesive mixture which " resisted " the silver lustre when the pottery was dipped into it. All the surface not previously covered with this resistant mixture became covered with the lustre. The second firing (the first was to harden the covering of white slip) burnt away the resist mixture and fixed the silver lustre, and the pattern stands out in white. Eng-

Very rarely in this country, and not often in land, is this silver " resist " decoration found in which the pattern shows canary-coloured instead of white. Such pieces command very high prices. At the Bur- ritt sale, previously quoted, a silver lustre pitcher with "resist " pattern in white brought $47.5, the pitcher being nine inches high. The one pictured in Figure 226 is six inches tall, and although part of a collection in this country, was found in England.

What remains of a very beautiful tea-set of this resist ware is shovm in Figure 227. It was part of a bridal outfit in 1825. None of the pieces are marked, but the ornamentation on the top of the teapot and sugar-box and the beauty of the " honeysuckle pattern" on the body of the pieces, all show it came from some high grade pottery. It is on white china, too, and the bottom of the saucer is left plain. The plate is one of a pair and is an extremely choice one. This, as with so many other antique treasures, may be found in New England, and, happily, is not for sale.

The last stage of silver lustre is shown in Figure 228, which gives a cake or fruit basket of gray pottery ornamented with a graceful pattern covered with the lustre. The combination of the gray and silver is very pretty, while the dancing figures modelled on the panels of the vases are graceful and full of motion. These pieces are probably between fifty and sixty years old, although ware like this was made some years earlier also. 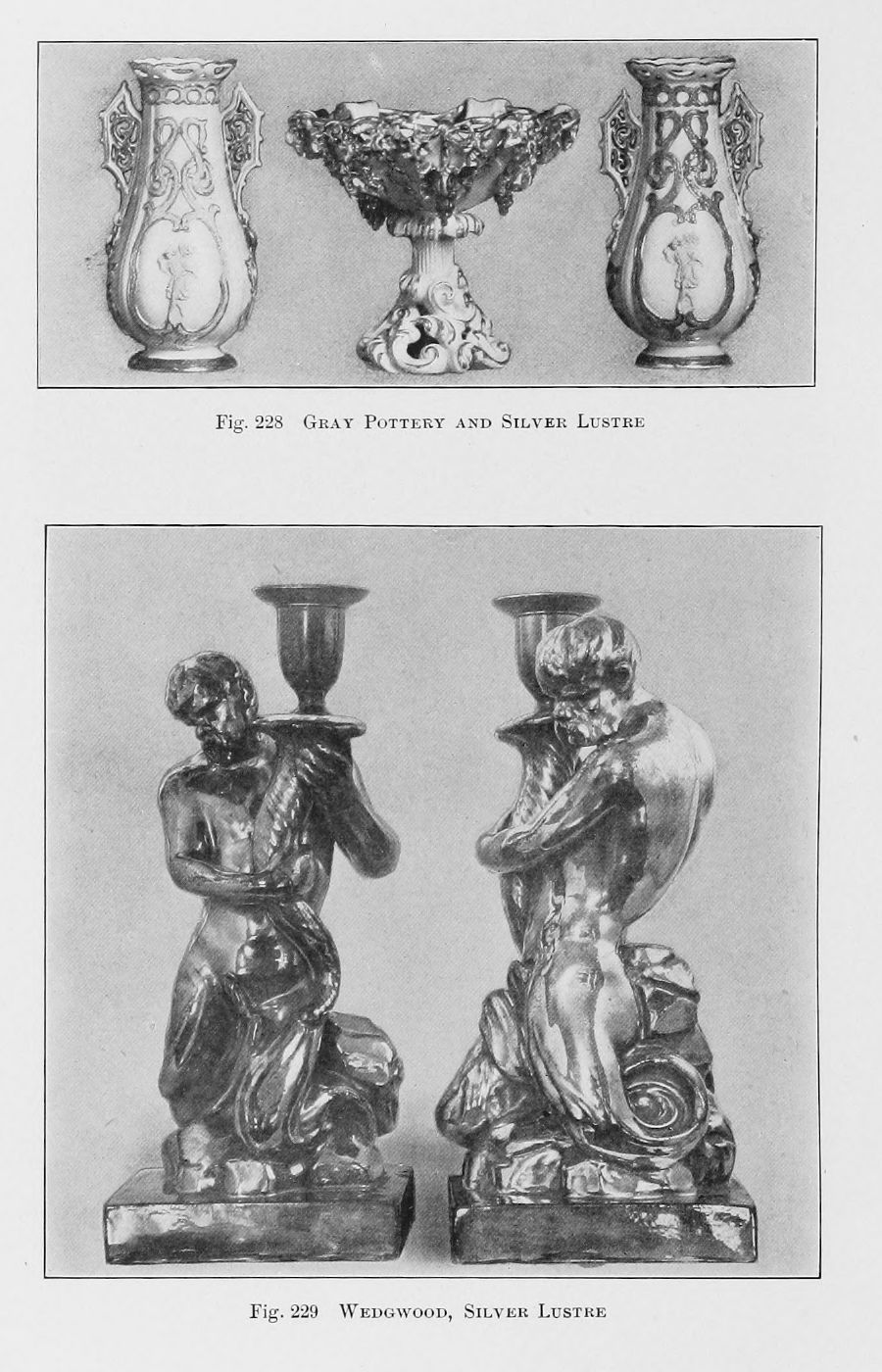 A china merchant tells me that he used to sell pieces like this when he was first in business, about 1860. He had to work them off as best he could, since they were "old stock." The basket shown is nine inches high and eleven across the top. The lines showing dark on the base and the leaves and vines about the top are of the silver lustre, while the pendant bunches of grapes are covered with the brown enamel. To-day the basket is valued at $15. The day it was new it could be bought for one-fifth of that sum.

In Figure 229 is given a pair of candlesticks by Wedgwood, representing figures of Tritons. Many groups, busts of children, griffins, and figures such as the candlesticks, came from WedgWood's potteries, quite a large proportion of them being modelled by the hand of the master himself. There is a note among his records of a payment made to William Bacon, one of the artists in his employ, for modelling "earth." a pair of Tritons in broun These candlesticks are such ft* a pair, and in common with many other objects from the Wedgwood works were lustred. 1791 is given in Miss Metayard's " Life of Wedgwood " as the date when silver lustre was first used in his potteries, and these Tritons are undoubtedly " Old Wedgwood," — i. e., made before 1795, when Josiah Wedgwood died. They are a portion of the fine collection of pottery and porcelain which is on exhibition at the Boston Museum of Fine Arts. ""

There is a material known as lead glass which bears a resemblance to sih'er lustre, and which has been known to deceive the unwary. This lead glass is made to-day, and one of its uses is as a reflector behind bracket kerosene lamps. I have seen goblets of it, shaped like the old-fashioned communion cups, in sev eral New England towns, and have never been able to trace their history, although their Owners allways as sured me that they were at least one or two hundred years old!

For about seventy years — that is, since about 1830 — no important examples, nor any large quantity of sih'er lustre was made. Within the last three or four years, since the demand for such pieces has become marked, dishonest dealers have been found to both make and sell such forged examples. Even the novice can scarcely be deceh'edby these modern specimens. The colour of the lustre dull and cloudy and darker is than the bright white lustre of the old ware. Shapes are poor and no care taken to render the specimens is choice. Toby jugs, which are occasionally fitted with lids for teapots, large bowls, and goblets, and crude a pepper box in the form of man in a cocked hat are a the chief modern pieces. It impossible to tell where is this inferior modern stuff is made, but Belgium is said to be responsible for some of it. With a little care no one need be deceived by it. Since the above was written have seen other speci

I mens of modern silver lustre which are being made in England. Among these new pieces may be found gourd and melon shaped teapots, and tea-sets with white china body and with spiral fluting. W. W. Slee of Leeds, who has in his employ potter who used to work at the Old Leeds Pottery, is a successfully turning out tea-sets, candlesticks, tobacco jars, and small fig ures. Most of these are from the old Leeds models and can easily deceive the unwary. The Wedgwood firm is also experimenting in this ware, and some of Mr. Slee's specimens in lightness surpass even the old ware. Experience alone can guide the collector, and if the same shape in good condition is found in a number of shops, it would be best to avoid it, as pre sumably modern. 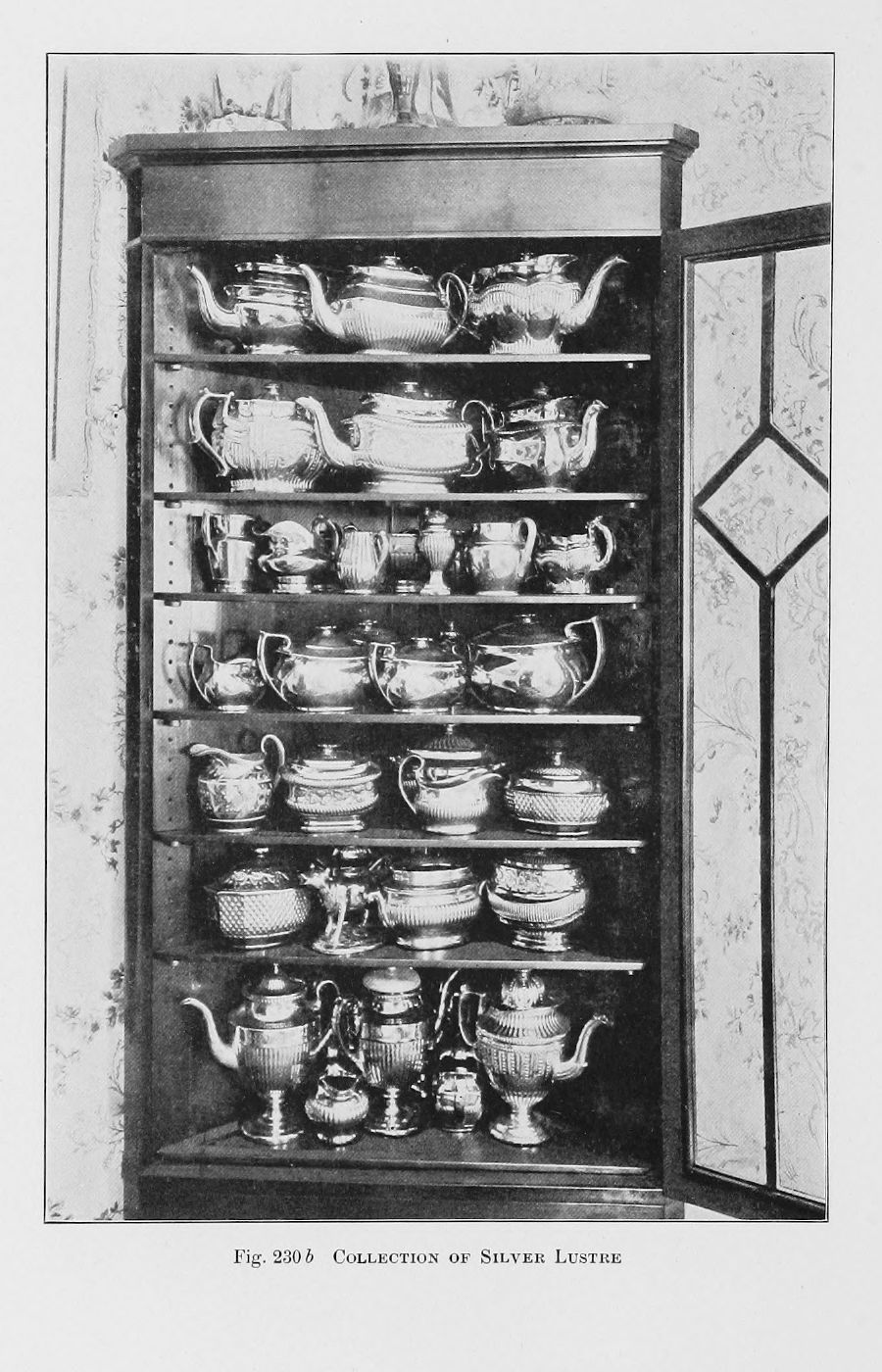