A very choice collection of silver lustre, chiefly tea and coffee pots, shown in Figure 230. only portion is They are a of what this fortunate collector owns. The third and last metallic lustre to be considered has been made, so far as can be ascertained, in Eng land only. It the gold lustre, more commonly known as " rose spotted,"isor " Sunderland lustre," and it is quite as rare and costly as the silver lustre. The effect obtained by precipitating gold and then applying it is to the pottery either in pattern or in spots and a blotches, which vary in one from a rose colour to a purplish tint, caused by the lustre being laid on thick or diluted.

In Figure 231 given is large gallon-sized rose- spotted jug, which relies on its good formaand the delightful play of colour to make pleasing. I first saw this jug what sad wreck it When a was! It did not have even the rudiments of a handle. it 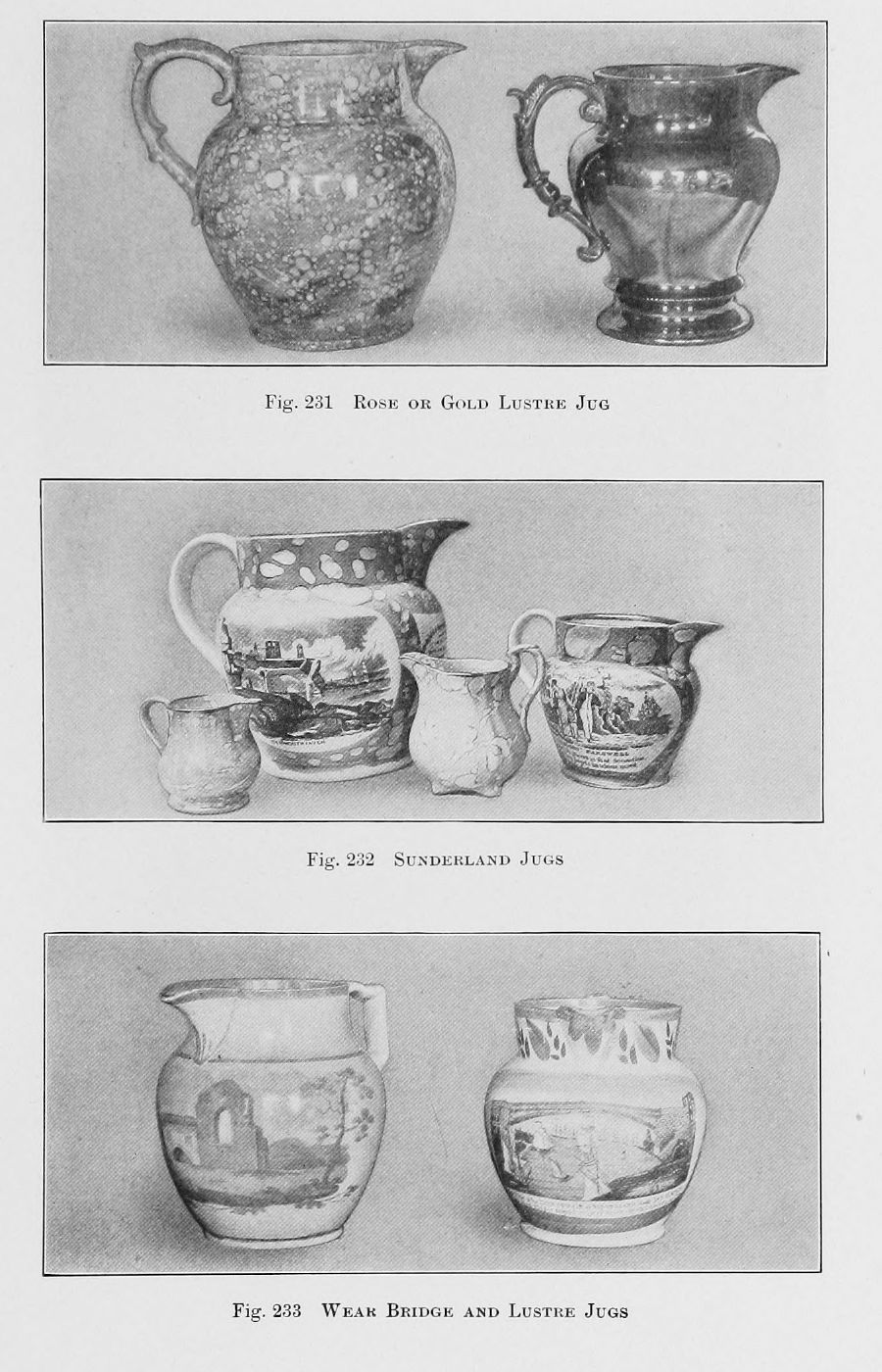 The collector who owns now discovered it in Maine it in farmhouse, where in its dilapidated condition had beenaconsigned to the top shelf in the buttery. it When it was brought down the collector questioned what had become out." of the handle, and was answered, " It was thrown She spent an hour grubbing in dust and ashes trying to find but had to come away with the pitcher only. The present handle it, triumph of is the restorer's art, and leads me to say that the despair a of the collector of jugs that person who insists on is lifting these treasures by the handle. The person who "knows " always lifts a jug by placing one hand in the mouth of the jug and supporting the base with the other hand. This procedure shows the collector that he has nothing to fear, and almost as welcome as the " grip " among Masons. is sign a

The second jug in Figure 231 copper lustre, about fifty years old, and of German make. Notice how enis tirely differs in shape, in style of handle, and base it from any of the English pieces shown. It of is a beautiful deep coppery colour, undecorated, relying on its fine glaze for ornament.

Figure group of Sunderland pieces, all

232 shows a but one in proof condition, — that absolutely per is, fect, — and all of them are interesting. The largest of the four gallon-size cider jug, with is a view in a colours of Twymouth Haven on the side shown. On the opposite side is a ship, flanked by sailor and a a female figure, while below the following verse: is "The sailor tossed on stormy seas,

Though far his bark may roam, Still hears voice in every breeze That wakensathoughts of home; He thinks upon his distant friends, His wife, his humble cot; And from his inmost heart ascends '" The prayer: ' Forget me not ! The other pitcher has a picture in colours called the "Sailor's Farewell," with a verse which runs:

"Sweet, oh ! sweet, is that sensation,

Where two hearts in union meet, But the pain of separation Mingles bitter with the I have found this sentimental verse on Sunderland ware only, but it does duty on punch-bowls as well as pitchers.

The little jug on feet is one of those specimens cast in a silverware mould and then lustred. It is made of coarse pottery, as a small chip on one foot shows.

Sunderland and Newcastle are usually classed to gether, and the earliest pot works at these places were opened between 1730 and 1740.

About 1755 Mr. Byers established works at New castle, and in 1762 Messrs. Christopher Thompson and John Maling erected potteries near Sunderland at North Hylton.

In 1817 Messrs. Dawson, and also Messrs. Phillips, opened factories at Hylton-on-Tyne, and at Sunder land and Southwick Messrs. Scott and Company built potteries in 1789, while the Moores built there in 1803. Early in the nineteenth century Dixon, Austin and Company had potteries in the neighbourhood of Sun derland. The pieces made at Newcastle often bear the names of Sewell and Donkin, or of Thomas Fell and Company.

The Newcastle and Sunderland pottery somewhat resembles Staffordshire ware, but is coarser and not so carefully finished. It has a decidedly yellowish colour, and nearly all of the subjects used for decoration have a nautical flavour, showing that they were chiefly used by sailors. There is something breezy, if rather coarse, about the drinking vessels of this ware, and we can imagine the sailors home from a cruise drinking from them and roaring out their choruses, and looking down into the mugs, so many of which had in their interiors a very naturalistic frog.

The most famous pattern ever made at these pot teries was the great bridge over the Wear, begun in 1793 and finished in 1796. One of these jugs is shown in Figure 233. The other jug shown in this picture is the handsomest rose lustre jug I have ever seen. Even though the body of the pitcher is somewhat dis coloured by hard usage, the picture of the ruin comes out in great beauty, the shades varying from a deep crimson to a pale pink, while over the whole plays that lustrous iridescence characteristic of gold lustre. On man}' jugs the patterns used were grotesque, crude m colour, and badly drawn. This design is quite charming.

Another arrangement of the Wear Bridge pattern is shown in Figure 234. This has the Bridge under the lip also, but opposite to the usual verse is a mari ner's compass, flags, and nautical emblems. This is also a gallon pitcher, and has considerable lustre deco ration on it. 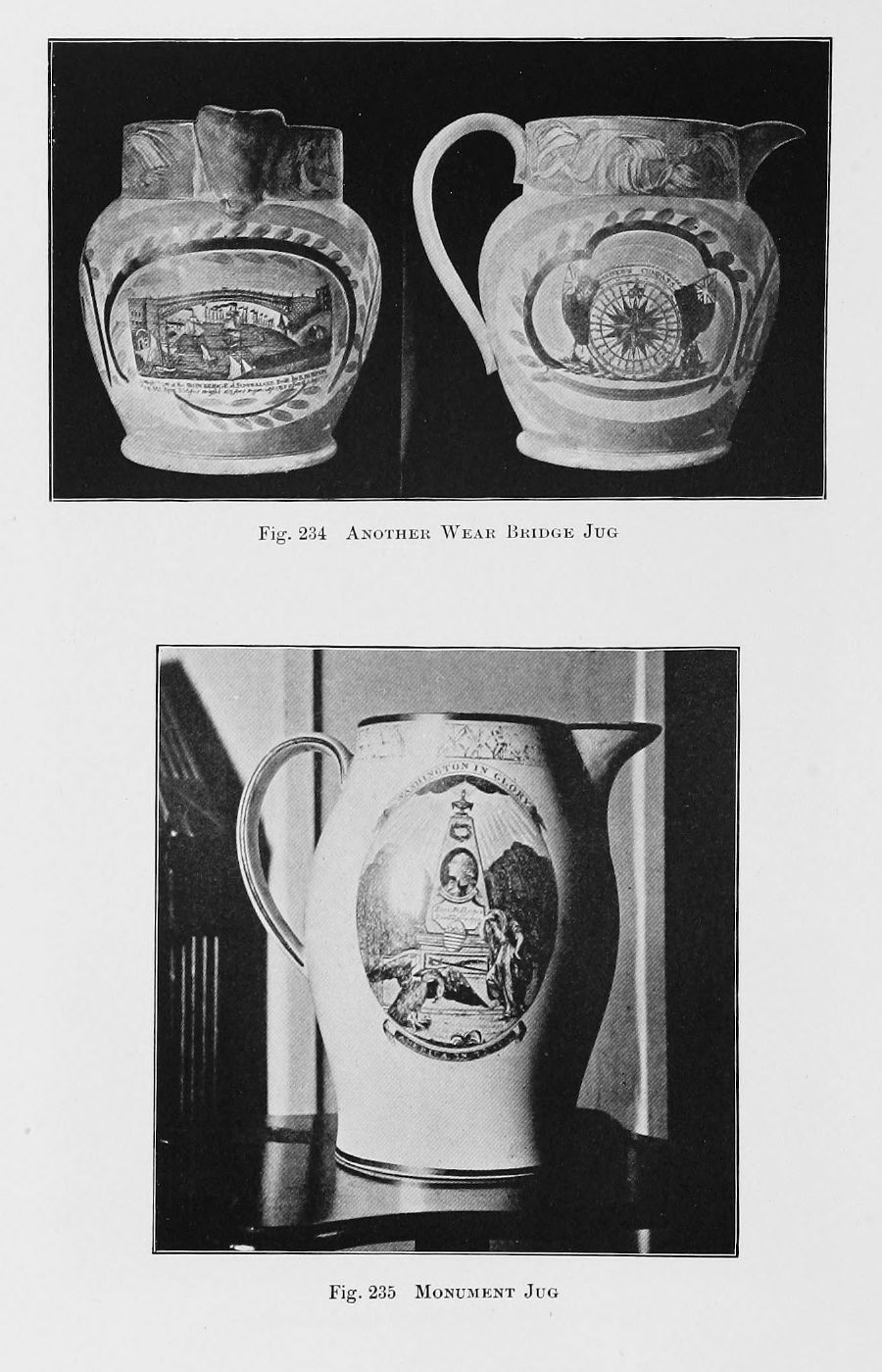 There is another class of pitchers and punch-bowls which, while they hardly come under the designation Lustre, have more or less of this decoration on them. The chief claim to interest these articles have is that many of them are more or less historic, and show scenes in our early history, or portraits of our heroes. The monument jug in Figure 235 is a sample of one style, and is a famous pitcher. It has a portrait of Wash ington, a design of Fame weeping beside his tomb, and several inscriptions on it. Lustre bands are at top and bottom, a pattern in lustre also surrounds the top, and even the handle has its band also. The pitchers with this design come in twelve and ten inch sizes, and are valuable specimens to own. Many variations were made of this theme; sometimes there was one portrait only, sometimes there were two, but there was always some lustre decoration.

Masonic devices were also favourite ones for jugs and mugs, some being dated as early as 1795, which, of course, adds to their value. A group of these much sought pieces is given in Figure 236, largely of Staf fordshire ware, and the fine old punch-bowl in the centre has the well-known face of Franklin, surmounted by his fur cap. The English potter did not hesitate to perpetuate disastrous defeats to the British army and naAW, provided these articles met with a ready sale in America, which was the best foreign market open to the potter. && 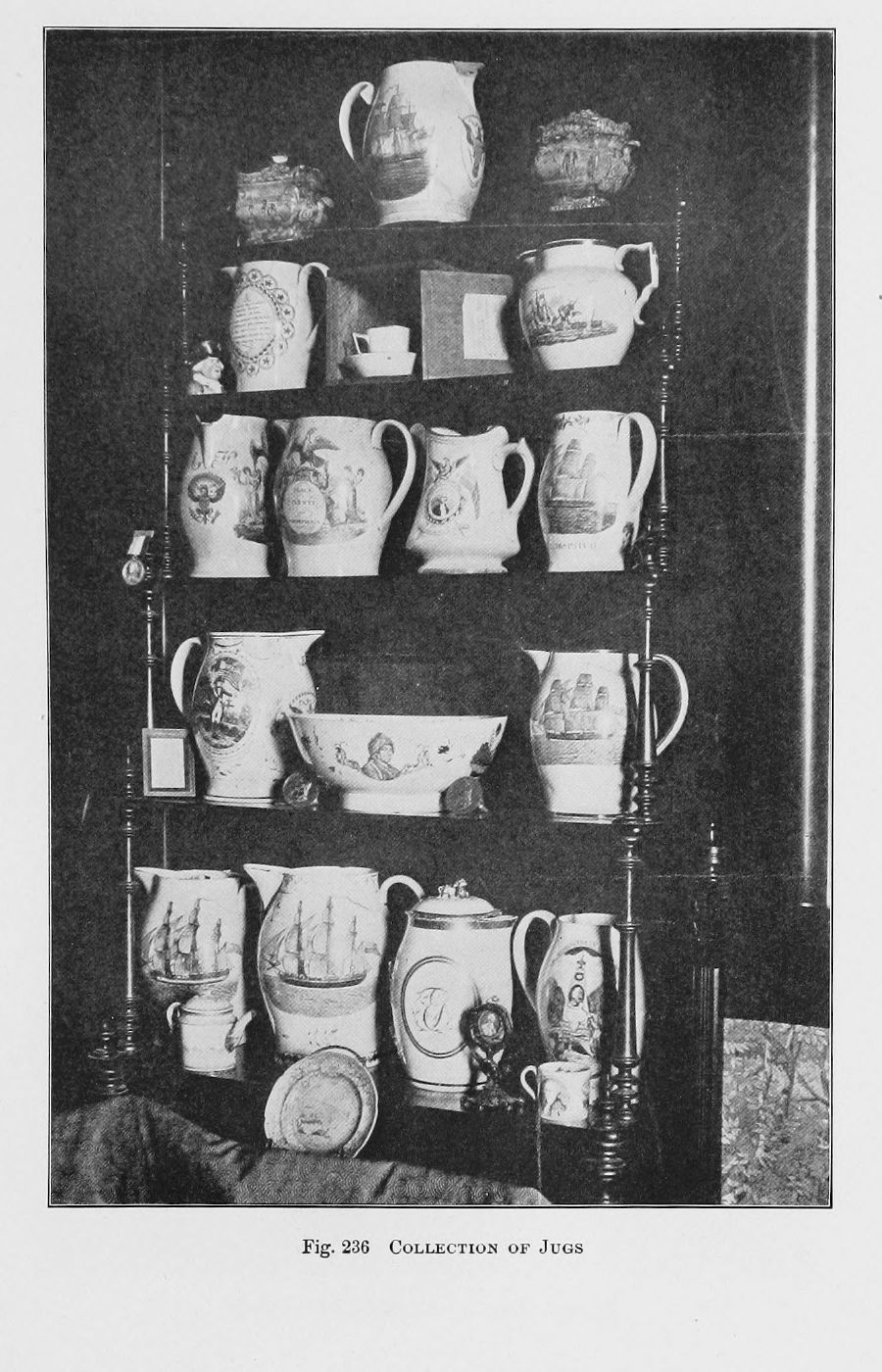