Even when no other symbol told of our prowess the m. eagle screamed from many a piece, like the nice old Castleford pitcher, with pink lustre decoration, shown in Figure 237. I find many pieces with the eagle in various attitudes, sometimes grasping the thunderbolts, sometimes with the thirteen stars above or below him, but this is the only example which I have met in which he is bearing the olive branch. On the front of this jug is a beautiful monogram, also in lustre of a fine pink shade, and, judging from its excellent condition, it was carefully used. It has the pitted surface which was always to be found in Castleford ware, and a raised border surrounds the top, composed of leaves and flowers and star-like medallions. 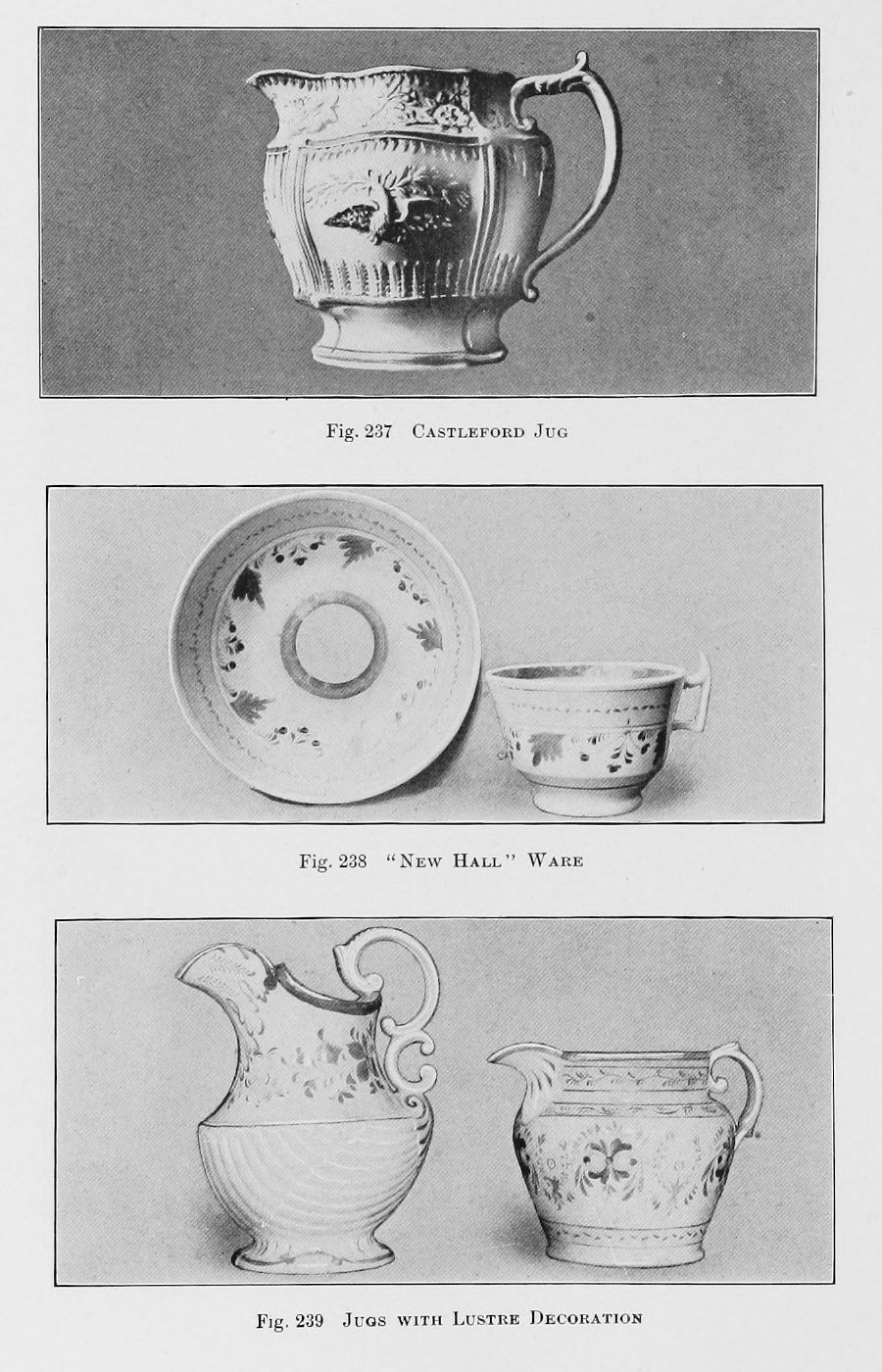 There are hunting and guild pitchers with lustre bands on them, and frequently with borders as well, more or less ornate. On them are also scenes and devices in black or brown print, and the makers seemed to rely on the lustre bands to brighten them up.

There is much pottery and porcelain to be found here which is decorated with black or broAAm printed scenes, and set off with either bands of lustre or little leafy sprig decoration. Such ware is called " New Hall," and was made at Shelton, in Staffordshire, be fore 1825, when the works closed. Many Owners of tea-sets like the cup and saucer in Figure 238 call them "New Hall " also, although the entire decoration is in lustre.

Very pretty and graceful all such sets are — plain lustred decoration or with the prints. A favourite design in the printed ware is a mother reclining on a sofa and playing battledore and shuttlecock with a little girl. This picture is shown in the article on pitchers previously mentioned.

Figure 239 gives two more very handsome pitchers. The one on the left is called " Nautilus " pattern, and the design is painted on in rose lustre. The pitcher is marked " Wood," impressed. This Wood was one of the famous English potters avIio made so much of the "Old Blue," which is now eagerly sought. The name "Wood " alone was used as a mark between 18 and 1818, when the sons were admitted to partner ship and the signature was "E. Wood & Sons," or "E. W. & S."

The other pitcher has the main design about the body in colours, all the small details being rose lustre as well as the bands and vine designs about the top and base.

Eleven of the jugs shown belong to one collection, the indefatigable Owner of which spares not herself in searching both this country and Europe. The most ex pensive pitcher of the eleven was the large one showing Twymouth Haven, bought in Maine, for which $6 was paid.

The cheapest was the little one on four legs shown in the same picture. This was bought for a quarter. All the others came in between these two extremes, even the beautiful silver lustre " resist " jug, with its graceful design of tulips and leaf pattern.