The four-post bed shown in Figure 206 is at Mount Vernon. Upon it General Washington rested in his last illness, and it is supposed to stand in the spot where he had it during his life.

Many of these old four-post beds are very narrow, — about four feet wide. This was the standard width in those days, and each extra inch of width was charged for. This size was the rule as late as 1795, when the second edition of the "Journeyman's Cabinet and Chair- maker's Philadelphia Book of Prices " was published.

It says, extra width or extra length shall be charged for at the rate of two pence per inch." This Washing ton bed is of mahogany, of unusual width, over five feet, and no doubt was purchased by the General him self, as he never missed an opportunity to add to the comfort and elegance of his home.

In 1774 Belvoir, the home of the Fairfax family, one of the most splendid mansions on the Potomac, was closed on account of the continued residence of the family in England, and its contents sold. General Washington (he. was Colonel then) bought goods" valued at £200 sterling, and among them was a mahogany settee bed with Saxon green covers for same, pounds."

This form of bed went by various names, — stretchers, day couches, or settee beds. The one I show (Figure 207) is still in perfect condition, yet it belonged to Joseph Bulkeley, and is mentioned in his inven 4fc tory as a " stretcher." He died early in 17, and brought this to this country in 1690, or thereabouts. As can be seen, this stretcher is a very handsome piece of furniture. It is of oak, of Flemish work manship, with handsome carved underbraces and the curved Flemish foot. The seat and back were originally of cane, and the back is yet perfect, but the seat has worn out with much service. Some of these single beds (for that is what they really were) had cords laced across and a mattress laid on them, and some had canvas seats also, with cushions or mattress. were made as late as 1800, but not many or them survived.

It is customary for people owning old furniture to have always call it mahogany, which often is erroneous. Our native cabinet-makers (and Phineas Pratt of Wey mouth, Massachusetts, was at work before 1630) used cedar, ash, elm, pine, maple, cherry, poplar, walnut, and nutwood (which was hickory), so they had many varieties to choose from. 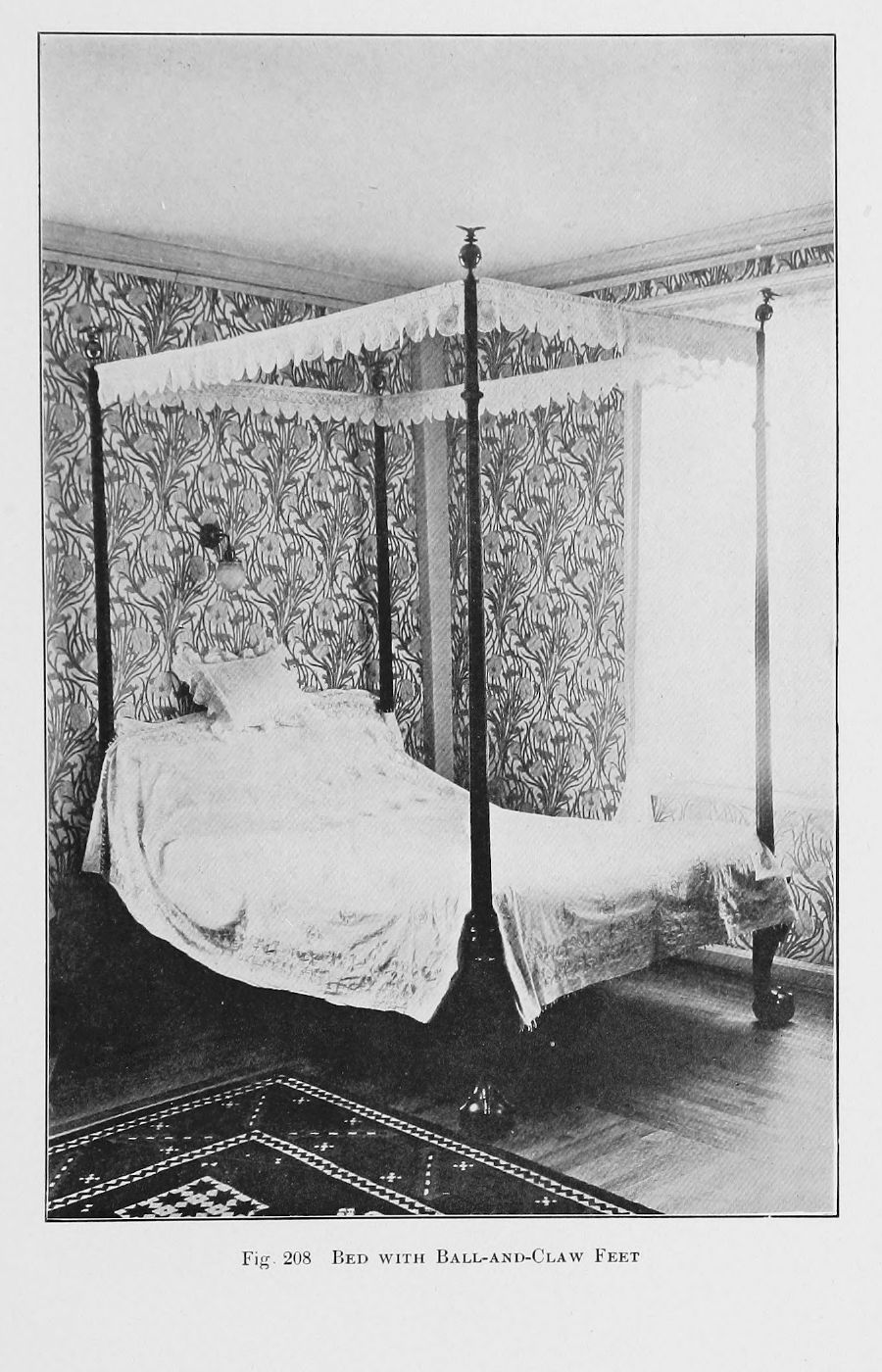 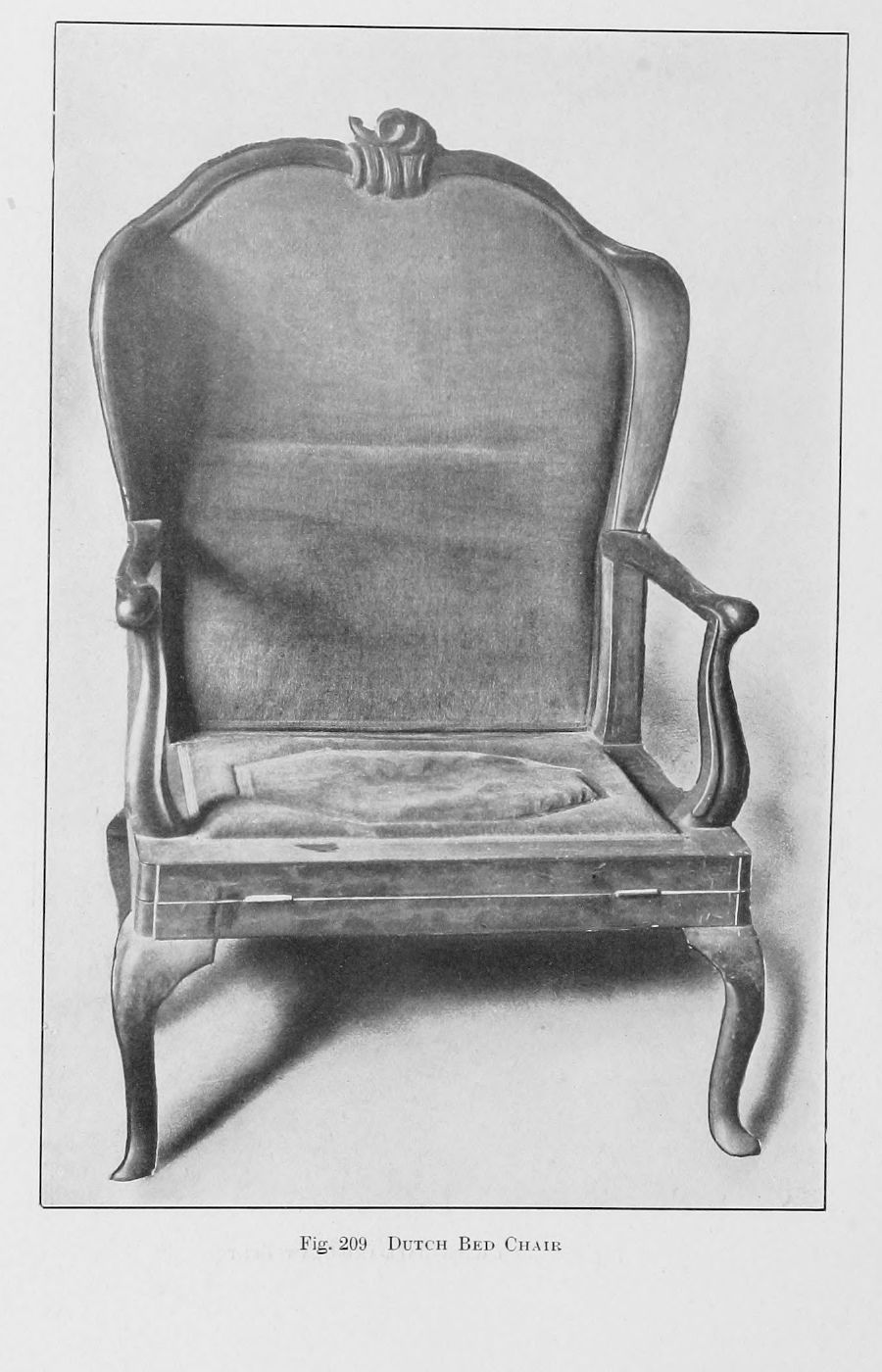 The legs and posts of these old beds varied greatly. Some were so high that when the feather-beds were added a pair of steps was required to mount into one with comfort. The width differed, as has been pointed out, and the decoration of the posts also shows much variety, some being plainly turned, others having the two foot-posts carved, the head-posts being plain, as they were concealed by drapery. Head-boards were often omitted, their place being filled with curtain stuff.

Ball-and-claw feet are sometimes come across, though these were usually confined to desks, bureaus, chairs, etc. There is a bed with such legs in the rooms of the Concord Antiquarian Society. It was part of the wedding outfit of Martha Tufts, who was married in 1774. The quaint old curtains are dropping with age, and still display men ploughing, cows and other animals in dull shades of blue and green. A choice example with ball-and-claw feet is given in Figure 208. The posts are unusually slender, and ornamented with brass balls and eagles on the tops.

Such beds had no springs, which were not invented till later, but were laced across with ropes, in many cases requiring the strength of the entire family to pull them tight enough. A mattress of straw was laid over the cords, and upon this was piled the feather-beds, — as many as the household could muster.

The next Figure (209) shows a Dutch bed chair, very rarely found, and of which few were brought over here. This one is of maple, very handsomely inlaid in a floral pattern with satinwood. The hinges on the front of the chair show, and a piece comes from be neath the seat, the back lets down, arms and legs come together for its support, and the result is a long, narrow bed. They are occasionally mentioned in inven tories, but this is the only one I ever saw. It is in the museum connected with the School of Art at Cooper Institute, New York City, and is in a state of perfect preservation.

Another style of bed made chiefly by the Dutch is given in Figure 210. As can be seen, it is nearly cov ered with a beautiful pattern in marquetry, the darker wood being maple, which contrasts very prettily with the light, inlaid woods. This bed is six feet six inches wide, but I have seen them in single widths also. One peculiarity of these beds, as well as many of French workmanship, is that the decoration is on one side only, the intention being that one side shall go next to the wall. Often the wood of the wail side is different from the rest of the bed, and recently I saw an exquisite, carved rosewood bedstead, with the wall side of deal, stained to match the colour of the rest. It seems a strange economy, and may be classed with making the lids of chests of pine, when the bodies of them were of oak. 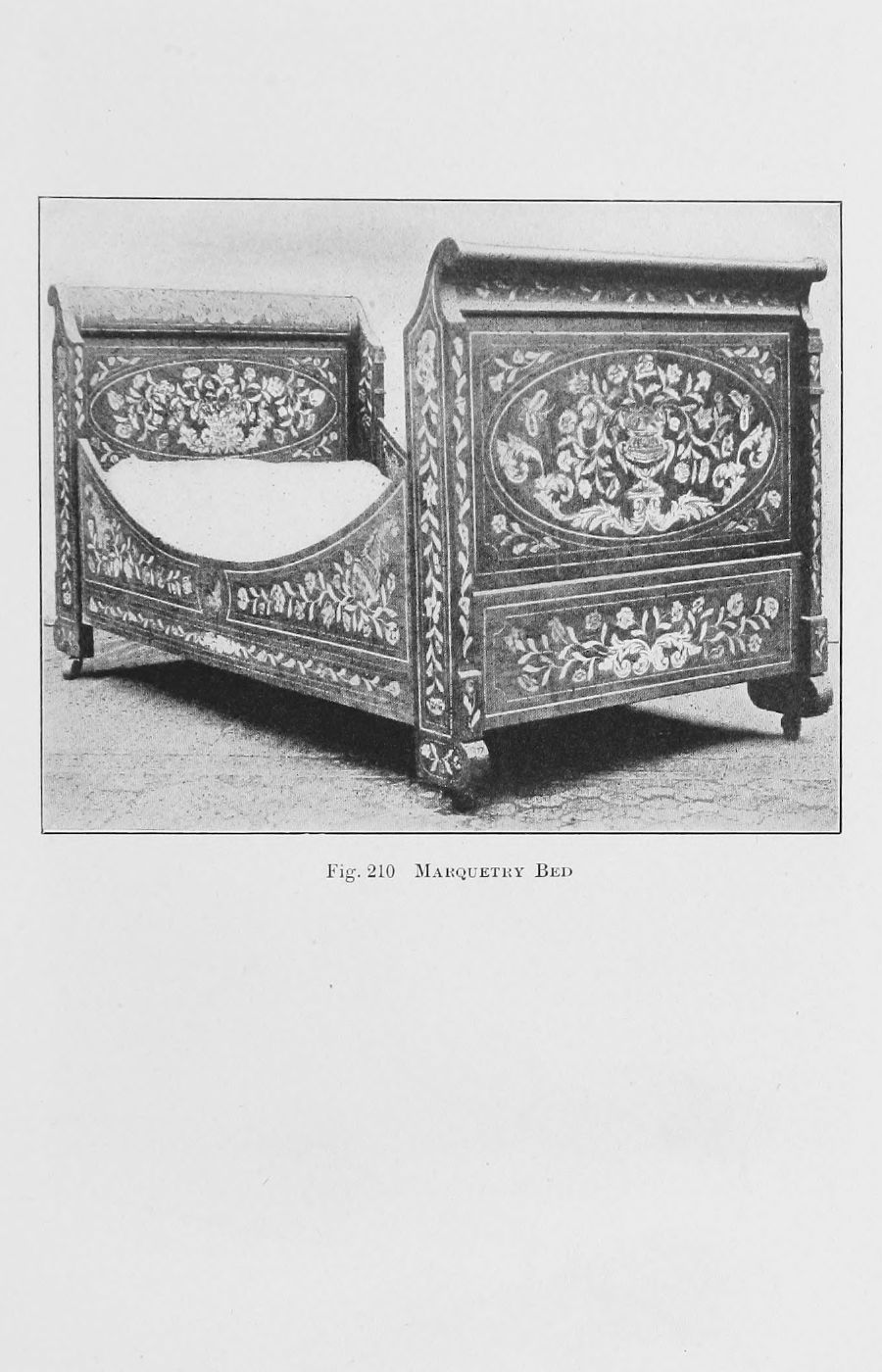 An unusually elegant four-post bedstead can be seen in Figure 211. It is of mahogany, richly carved, with a decorated frieze and water-gilt mounts. It is plainly of French make, and belongs to the latter half of the eighteenth century. The head-board and two head- posts are plain, and it was intended that they should be covered with drapery.

Another four-post bed, very much simpler but pleas ing for its very simplicity, is given in Figure 212. I am inclined to believe this to be of American make, since the posts are all finished alike, and the fluted posts were favourites with our own makers. I have seen beds of the same pattern which came from Charleston, South Carolina, during the first half of the nineteenth century, and which were made of very choice curly maple. They were foolishly cut up by their owner into hall chairs and goodness knows what other fripperies! 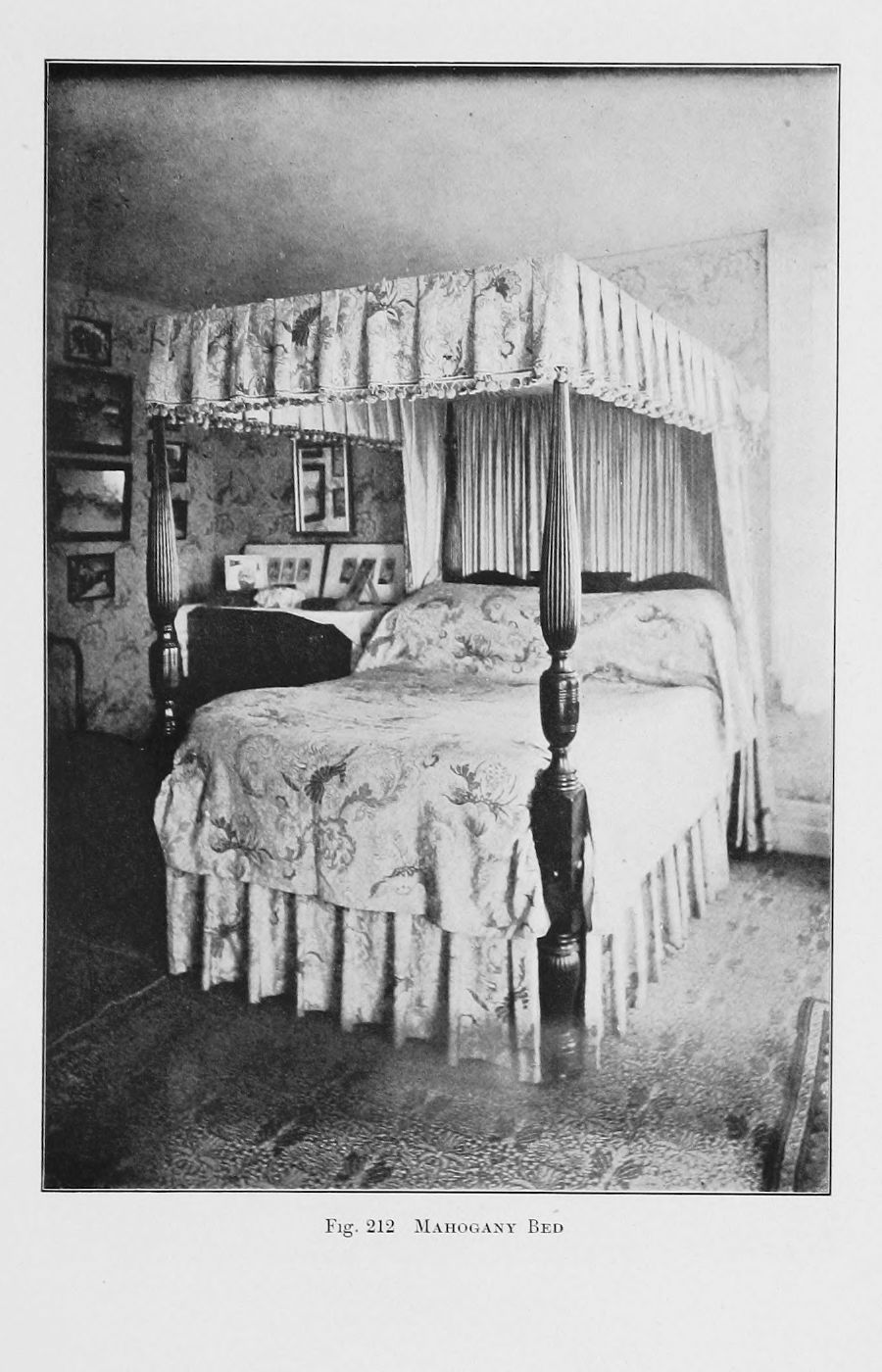