The last style of bed shown (Figure 216) is often 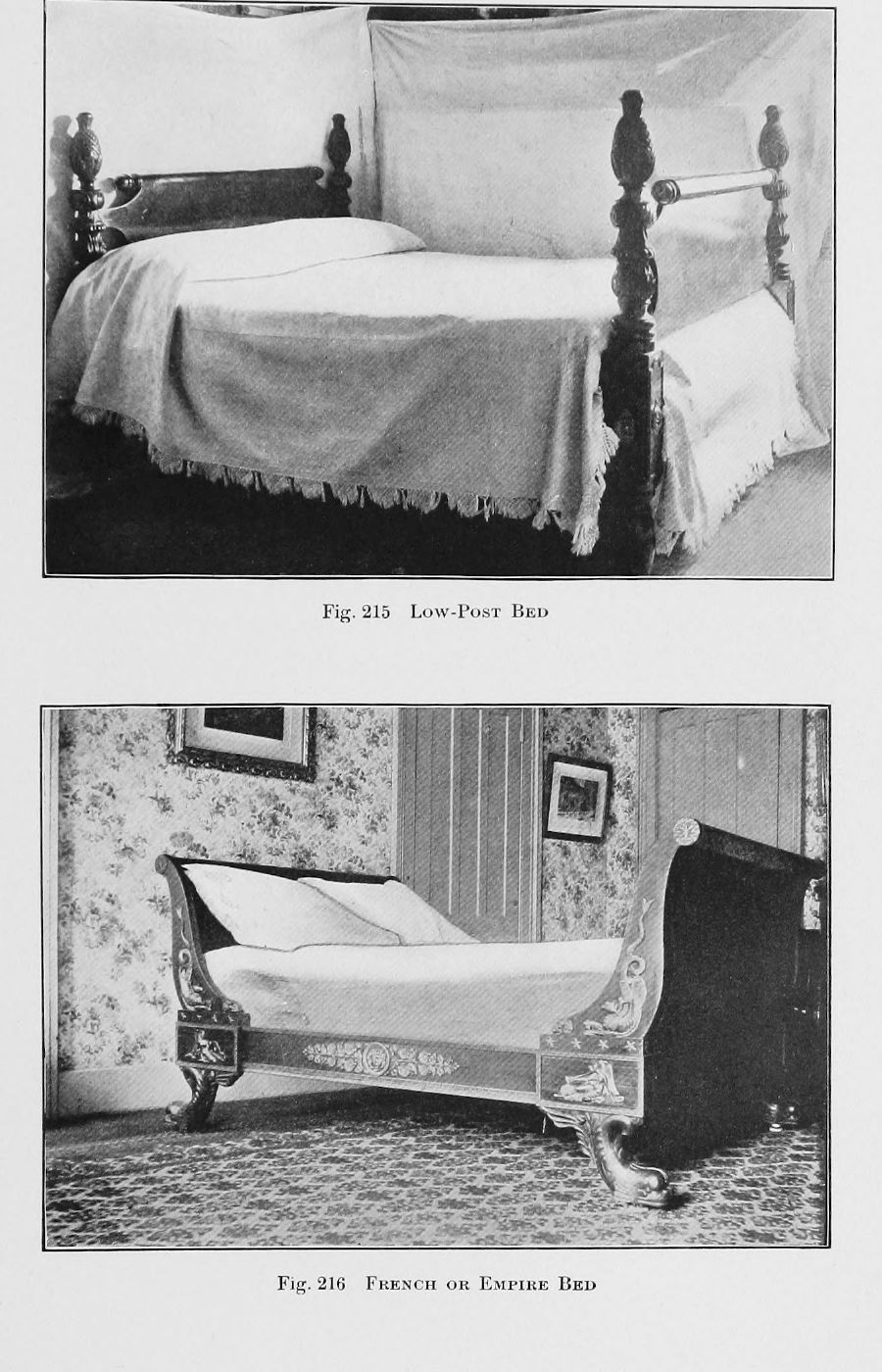 "" called French The more correct name is really bed. Empire, for it was this style which prevailed in the early years of the nineteenth century, when France, having passed through the throes of the Revolution, emerged as an Empire under the great Napoleon. It mm was his wish that styles of dress and furniture should be altered. All the exquisite furniture of the times of the three Louis' was banished, though much had been destroyed in the looting of the royal palaces. The 8& Empire style sought its inspiration from classic models, though after it had passed through the hands of a French artist like David it could scarcely recognise itself. There was little carving, but the chief orna mentations were " ormolu — that is, headings and decorations made of carved or pressed brass applied to the surface of the veood. During the reign of Louis XV this style of work, under the hands of masters of their craft, had reached its greatest excellence and beauty. Under the Empire mm it became but overloaded ornament. After the Egyp tian campaign chairs and tables, stools and commodes blossomed out with carved sphinx heads, and Egyptian ornaments, and though the furniture poor, artisti cally, itinteresting as the memorial ofis is man who a impressed his personality on everything with which he came in contact. The bed illustrated an excellent example of its class. It was imported from France, and stood for many years in the bridal chamber or guest-room of the Van Rensselaer mansion at Albany, New York. The mounts are carved from solid brass, each smallest piece being made with the beauty of work. The figures of Fame, with her trumpet, repay the closest examination. Indeed, this bed has been reproduced several times for different members of the family, each reproduction costing a thousand dollars, owing to the work in copying the brasses. The carved dolphins' heads are also fine, the usual foot being a plain bracket or round foot, rarely carved.

Empire style became very popular in England, where it was poorly carried out by the use of pressed instead of carved brass. Of course, we followed European styles, and our rendering of Empire is both handsome and solid. We did not use the brass ornament, but much wood-carving, keeping only to the general lines of this style. I have seen Empire beds made in Mas sachusetts which were elegant and patriotic as well. The wood was solid mahogany, and the sides of foot- and head-boards ended in very spirited carvings of eagles' heads, — our Own national war eagle. These were the only ornaments, the bed relying otherwise on the rich grain of the wood for its beauty. Much of the best furniture to be found here now is of the so-called Empire style. It is either in solid or veneered wood, in which latter process our native makers were very successful. t *$m