The clocks in which we are chiefly interested are those for household use, and the earliest which we had came from England. By 1600 there were clocks made for a moderate price, and for the use of the average house holder. These clocks were known by the names " bird "lantern," or "bed-post" clocks. They were put o on sheh'es or brackets attached to the wail, and were wound by pulling down the opposite ends of ropes on which the weights were hung. Some of these were striking clocks; others were furnished with an alarm, and none of them was expected to run for more than thirty hours. Samuel Pepys mentions in his diary such Clock a clock be longing to Catherine of Braganza in 1664. He says: 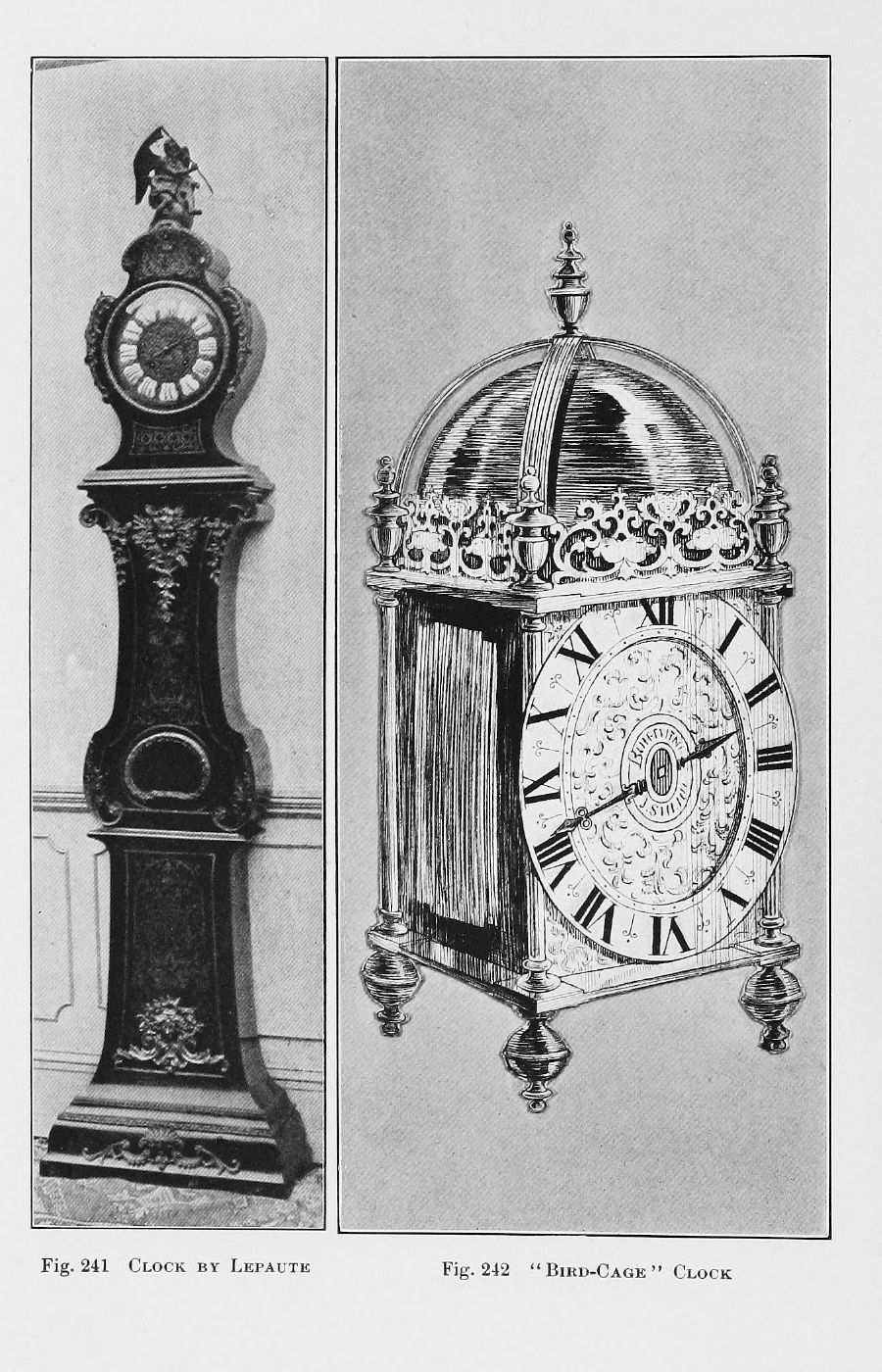 "Mr. Pierce showed me the Queen's (the Portuguese Prin cess, wife of Charles II) bedchamber . . . and her holy water at her head as she sleeps, with a clock at her bedside, whereintime." a lamp bums that tells her the time of the night at any

In fact small portable clocks were mentioned nearly two hundred years earlier than Pepys' note, and in the "Paston Letters," which are such valuable repositories, I take the following extract. The letter is from Sir John Paston, and is dated 1469:

"I praye you speke wt Harcourt off the Abbeye ff or a lytell clokke whyche I sent him by James Gressham to amend and yt ye woll get it off him an it be redy, and send it me, and as ffor mony ffor his labour, he hath another clok of myn whiche St. Thorns Lyndes, God have hys soule, gave me. He maye kepe that tyll I paye him. This clok is my Lordys Archebysshopis but late hym not wote of it."

The form was doubtless similar to the bird-cage clocks, though it is known that some of the early clocks had revolving dials. In the South Kensington Museum there is on an inlaid wooden panel the representation of a clock with a revolving ring, on which the twenty- four hours are marked, the current hour being indicated by a pointer. The date of the panel is certainly not later than 1500, and of course the date of the clock is older. In 1544 the Master Clockmakers of Paris were _jT incorporated by statute, and, in 1627, a proposal to grant letters patent to allow French clockmakers to carry on their trade in London, caused such an agita tion in London, that a committee of clockmakers was formed, and a petition for a charter was presented to Charles I, which he granted on the 22d of August, 1631.

The pendulum, which was introduced about 1661, superseded the balance. The first form was known as the " bob pendulum," which by 168 was followed by the " royal " or long pendulum. The clocks of the lantern or bird-cage variety were small, ranging in size from three and one-half inches to five inches square. One of unusual size was eight and one-half inches by sixteen inches high. The rounded top seen in Figure 242 is the bell upon which the hours are struck; and one peculiarity of these clocks is that the dial face often projects an inch or two beyond the sides of the frame. They are not uncommon in England yet, for they were made continuously till about 1825, and as the works are of brass and well made, they are excellent timekeepers. The little ornaments which stand up in front of the clock are known as " frets," and they are quite a sure indication of when the clock was made. The design of crossed dolphins came into use about 1650, and was a favourite pattern; and there were other frets, generally of geometric design, which also became well known.

Another style in use about this period was known as the " bracket " clock, and these clocks had either the handle on top, like that in Figure 243, or on the sides. Such clocks as these were luxuries, however, and cost what would be equivalent to seven hundred dollars. There are records showing that a popular clockmaker of the period, Henry Jones, of Inner Temple Gate, London, charged £150 for a similar clock which he furnished to Charles II in 1673. This style of clock continued in use for one hundred years and more, and with them the fret, which was now placed in the corners of the dial plate, became, as in the lantern clocks, in dicative of their age. 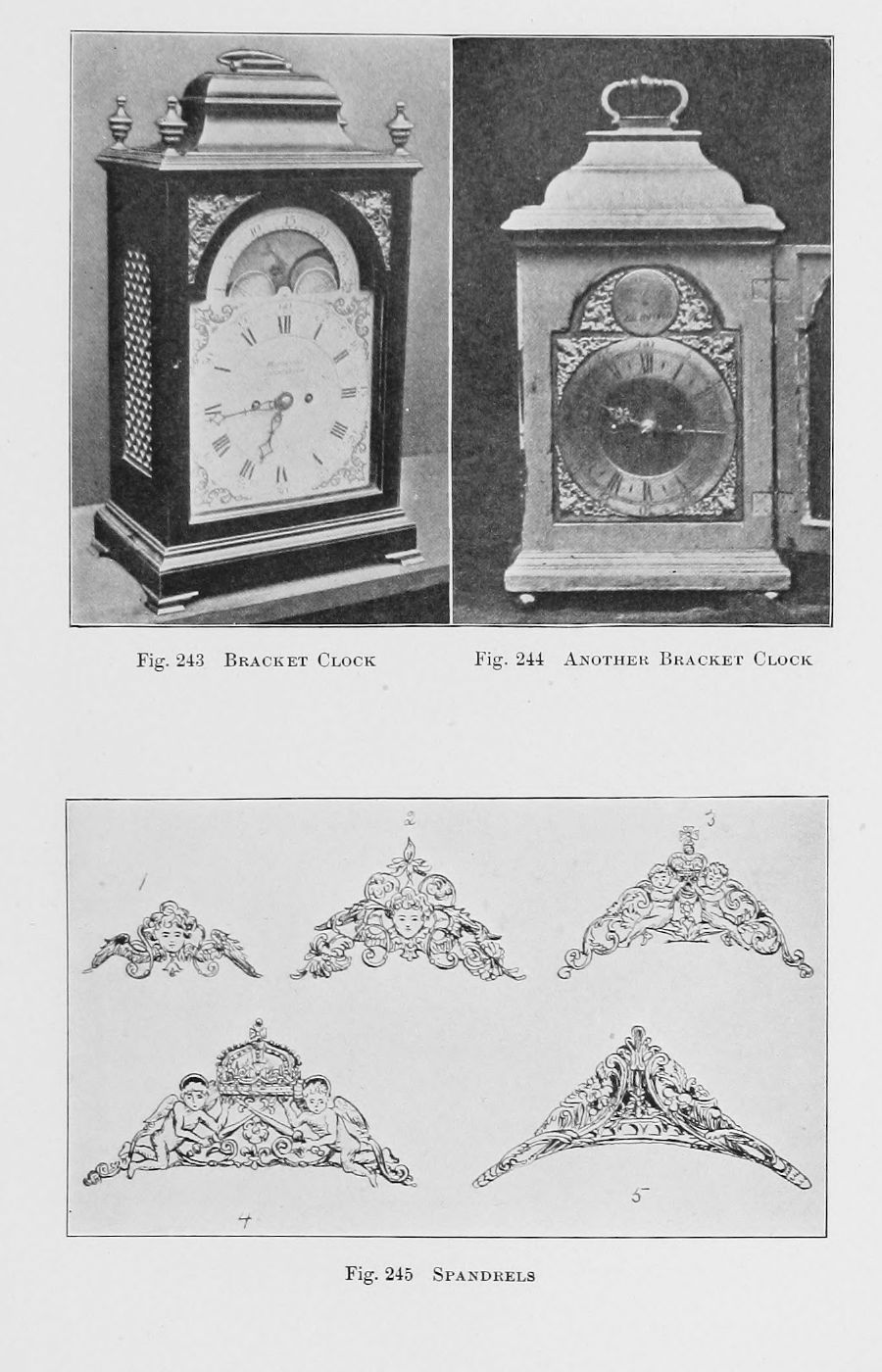 A fine example of the bracket clock is shown in Figure 244, and is Owned in White Plains, New York. It shows that it is a veteran, but it still goes, and it has beautiful spandrels and an engraved face. It has been in the pos session of the family for Over one hundred years, and in the upper circle has, in black enamel, William Buttock, Bradford. The spandrels or brass ornaments in the cor ners of the face point to the first half of the eighteenth century, as being the time when it was made. The case is of mahogany and there are brass screens at the sides to permit the sound of the striking to be distinctly heard. This clock is ATery similar to one at Windsor Castle, made by Justin Vulliamy, avIio came from Switzerland and settled in London in 1730. He became noted for the beauty and accuracy of his timepieces, and was appointed clockmaker to the King during the reign of George II. The succeeding members of the family held this office in the different reigns till the death of Benjamin Lewis Vulliamy in 1854. Specimens of his work abound in the royal palaces, and many of the clocks of Queen Victoria that were in active seiwiee were by him. In the presence chamber was one of them set into a splendid piece of white marble sculpture by J. Bacon, R.A., which was made in 1790. Under the clock on a marble shield is an inscription by Cowper:

"Slow comes the hour, its passing speed how great ! Waiting to seize it — Vigilantly The long-case or " grandfather " clocks were devel oped from the brass chamber clock with a wooden hood, wliich had to be entirely removed before the clock could be wound. Cockscrew or twisted pillars at each corner of the hood were characteristic of this period and that of Queen Anne, and frequently the cases were splendidly decorated with marquetry, which was the work of some of the numerous Dutch cabinet-makers at that time settled in England. Many of the early tall clocks were very narrow in the waist part, where the weights and pendulum hung, and the Swing of the pendulum was allowed for by the addition of " wings " or extra width in the case at the sides.

There were many variations of the hour circles on the dial. Before the minute hand came into use there were double circles where the numerals were, dividing the hours into quarters, the half hours being indicated by an ornament of extra length, like an arrow-head or fleur- de-lis. The engraving on clock faces and on the brass plates at the back was very beautiful, and artists were frequently employed to make them. Borders, intricate rings about the winding holes, birds and flowers, were all introduced into the decoration, and the spandrels or orna ments at the corners still further ornamented them. John Hancock's Clock George Washington's Clock 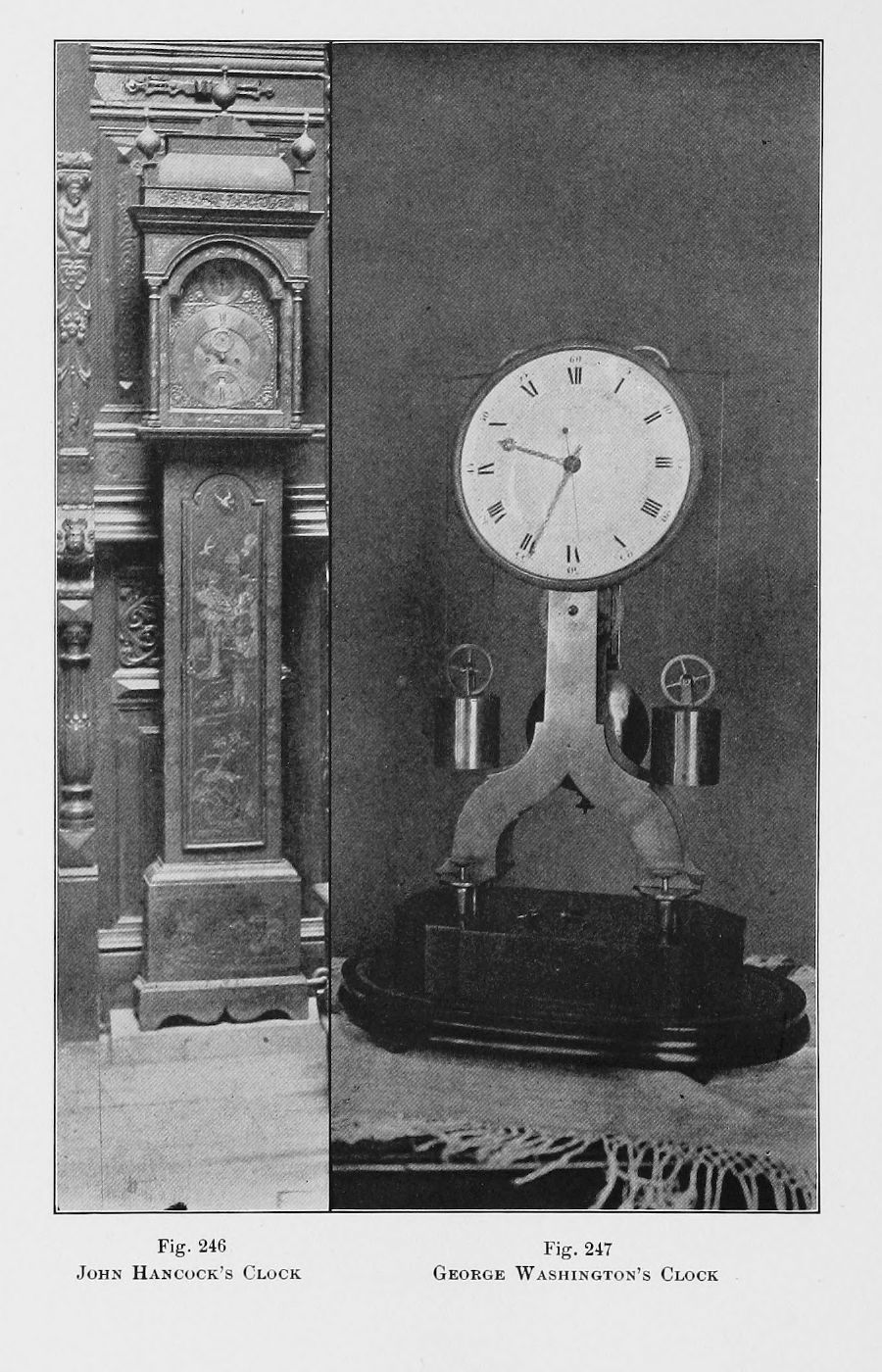