Some of the most famous English clockmakers were: Bartholomew Newsam, who was established in London as early as 1568; Rainulph Bull, keeper of His Majesty's 7XS?V great clock in 1617; Ferdinando Garrett, a working clockmaker, in 1600; William North, in 1615; Thomas Alcock, in 1661; and Daniel Ramsay, in 1610. The Clockmaker's Company was chartered in 1631, and was a trade guild for protecting the trade in London, or within ten miles thereof. Edward East, one of the most noted of English makers, was at work by 1620, and became watchmaker to Charles I. Henry Jones was at the height of his fame about 1673, and Samuel Betts" about 1640. Thomas Tompion, known as the Father of English watchmaking," had by 1658 attained much renown. He was succeeded by Daniel Quare, aaIio had a shop at St. Martin's le Grand, London, in 1676. Then came George Graham, an apprentice of Tompion, and much beloved by him, and who succeeded to his business in 1713.

As I have said, the spandrels or corner ornaments are important indications of the age of a clock. Very early dials have a line of verse in the corners, like the following: " Behold this hand,

Observe ye motion tip; Man's precious hours iTzzrv Away like these do slip." O The clock from which this rhyme was taken is dated

1681, and was made by John Ogden, Bowbrigg, Eng land. Then came the heads, which design was later elaborated; then twO cupids holding a crown, which lasted through the reign of Queen Anne. After this came the Rococo during the eighteenth century, and then the period of George III, where the design became degenerate, and the spandrels were cast, with- out even being retouched with a chasing tool.

Drawings of spandrels are shown in the next fig ure, number 245, and from them the approximate date of the clock can be told.

Oak has allways been a favourite material for the cases, and walnut, both inlaid and plain, was particu larly favoured from about 1675 to 1725. Very elegant cases of Dutch marquetry were made as early as 1665, and specimens of Oriental lacquer were by no means unusual from 1740 omvard. From 1750, when Chip pendale began to work and design, mahogany, both solid and veneered, became popular, and has continued so ever since.

The clock shown in Figure 246, besides being remark ably elegant in its case of Oriental lacquer, has an interesting history as well. It was imported from Lon- don in 1738 by Thomas Hancock, and then descended by inheritance to John Hancock. It was made by Marmaduke Storr, foot of London Bridge, who was a famous maker in his day. The order reads that the clock was to be ten feet long, " the price 15 not to exceed 20 Guineas, and as it is for my Own use, I beg your particular care in buying of it at the Cheapest Rate. I am advised to apply to one Mr. Marmaduke Storr, at the foot of London Bridge."

Another interesting timepiece is shown in the fol lowing Figure 247, as this clock belonged to George Washington. It was made by the well-known French man, Lepine, and is a curious looking affair. It was ^ wound at the back, for there are no keyholes on the face, and the keys may be seen lying on the stand. It was covered with a glass case, is made of brass, and has a handsome brass engraved wreath about the dial. It is now in the National Museum at Washington. It must have been a good timekeeper for one of General Washington's characteristics was promptness. He gave away more than one watch to his friends as keep sakes. One of these is now to be seen among the half- buried treasures at the New York Historical Society. The watch is of gold, with a clearly marked dial, and on the back is this inscription: " Trenton, N. J., Dec. 1, 1777. Presented to my friend Colonel Thomas John son, of Md. as a memento of my great esteem. Geo. Washington."

That Colonel Johnson and his descendants made good use of this gift is plainly visible from the scratched condition of the dial around the keyhole; but the case is in good order, showing the inscription very plainly.

Another famous man, Napoleon Bonaparte, was almost as punctual as General Washington. It has often been told that he had the power of going to sleep at any time when it was convenient, and that he could wake at any given moment. Only recently has it been discovered that he depended on a little alarm clock. This was found among the effects of the Princess Mathilde, avIio died recently, and who was his niece. The clock was made by Abraham Breguet, a French man of rare attainments and inventive power, and the most famous clockmaker of his time. This clock, so evidence sIioaa'S, was carried by Napoleon on his cam paigns. The case is of gilded bronze, richly engraved. There are eight dials, indicating the true time, mean time, phases of the moon, seconds, minutes, hours, days and months, and date of the year.

It strikes the hours and the quarters, and has a small metallic thermometer attached to it. Breguet also made for Napoleon a self-winding watch on the prin ciple of the pedometer, but whether on his Own inven tion or that of Recordon's patent is not established. o But long before this there were many watches and clocks in this country, though I doubt if anything but sun-dials, portable or stationary, and perhaps a watch or two, found their way over here in the first ship loads. A post in the ground gave the noon-mark with sufficient accuracy, and as for the hours of the rest of the day, they could be guessed nearly enough. By 1628, how- ever, one Joseph Stratton, of the Massachusetts Colony, had both a clock and a watch; and Henry Parks, of Hartford, who died in 1640, left by will to his church a clock.

In inventories clocks," "before 1677 I find many records of "striking and also " larums." These early clocks must have been of the bird-cage or lantern variety, though some large clocks seem to have " ye found their way over here. In October, 1688, 4th year of the Reigne of our Sovereign Lord, King James the second," a commission was appointed to examine into the condition of the Fort at New York. The report is long and interesting. They discover that the Fort and " Stockadoes " are in a ruinous condition and need many repairs. In a room over " ye Guard are beds." cabbins and a standyn bed stead with two Albany There is a " great old clock in ye Armourer's room." There are many other items of interest in this report, but they cannot be given here.

Joseph West, of New York, in an inventory dated May 6, 1691, leaves, among other items of value, to his " loving kinsman Edward Hastings, of Ship- ton, in Oxfordshire, Gentleman, my Diamond watch, one hundred pounds, and thirty French pistoles in gold." ""

The word clock was not applied as we now use it till the time of James I, but horologue was what the clock was called. " Clock " referred only to the bell upon which the hour was struck. Even at the present day a church or other large public clock is called horo- logue, and in remote parts of England the name clings to the ordinary household timepiece.

The first pendulums in long-case clocks were thirty- " grid nine inches long, and that style known as the iron " is still used in many foreign regulators. This pendulum was invented by John Harrison, about 1728, and was composed of nine parallel rods, five of steel and four of brass, fastened together by frames, by which the effects of heat and cold acting on the pen dulum were neutralised by the different expansion of the two metals.

After such elaborate timepieces began to find their way Over here repairs had to be made, and by 1712 there were clockmakers prepared to either make or keep in order any kind of clock"or watch."

In old newspapers like the Boston News Letter" per there are advertisements like this of a man aaIio formed all sorts of new Clocks and Watch works, viz.: 30 hour clocks, week clocks, month clocks, Spring table clocks, chime clocks, quarter clocks, quarter chime clocks, Terret clocks, etc." A few years later, in 1716, there were advertised " lately come from London, a Parcel of very Fine Clocks. They go a week and repeat the hour when Pull'd. In Japan cases or Wall Nutt."

The long-case clocks of early manufacture had a square face to the dial. Then the top of the clock-case and the top of the dial rose in an arch; and above the dial were inserted the phases of the moon, figures such as ships in motion, Father Time, etc., the

-TV. moving figures being preferred by the Dutch makers, aaIio were very proficient in this style of work.

Taa-o clocks are shown in Figures 248 and 249. The first is of English make, the second American, and both are of about the same age, being made about 1800. Figure 248 has brass works, and solid mahogany case decorated with lines of inlay. The phases of the moon and days of the month are shown above the painted face, and the clock is in fine condition and an excellent timekeeper. There is no name upon it anywhere, and its history is obscure; but some of the details are that the clock was brought from England in 1810, was Owned in Hingham, Massachusetts, then changed bands and was taken to Cambridge, Massachusetts, and now belongs to a collector in Montpelier, Vermont. 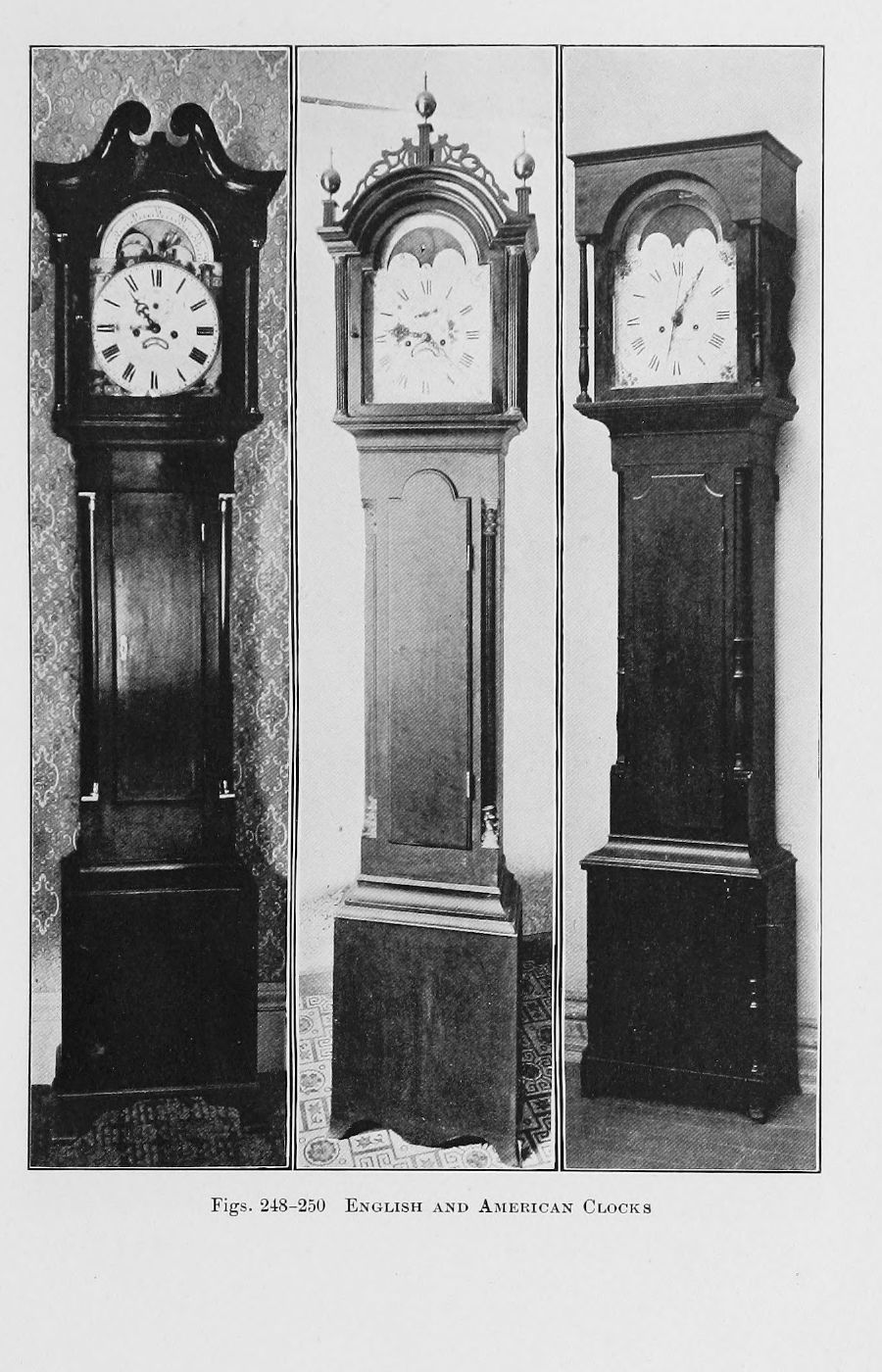