Another and very similar clock is shown in the next illustration, Figure 256, and this one has on the lower part of the case the name Willard. It also has but one winding hole, and is part of the Waters collection at Salem, Massachusetts. There are many of these clocks to be had; and so well were they made that even yet they are admirable timekeepers. 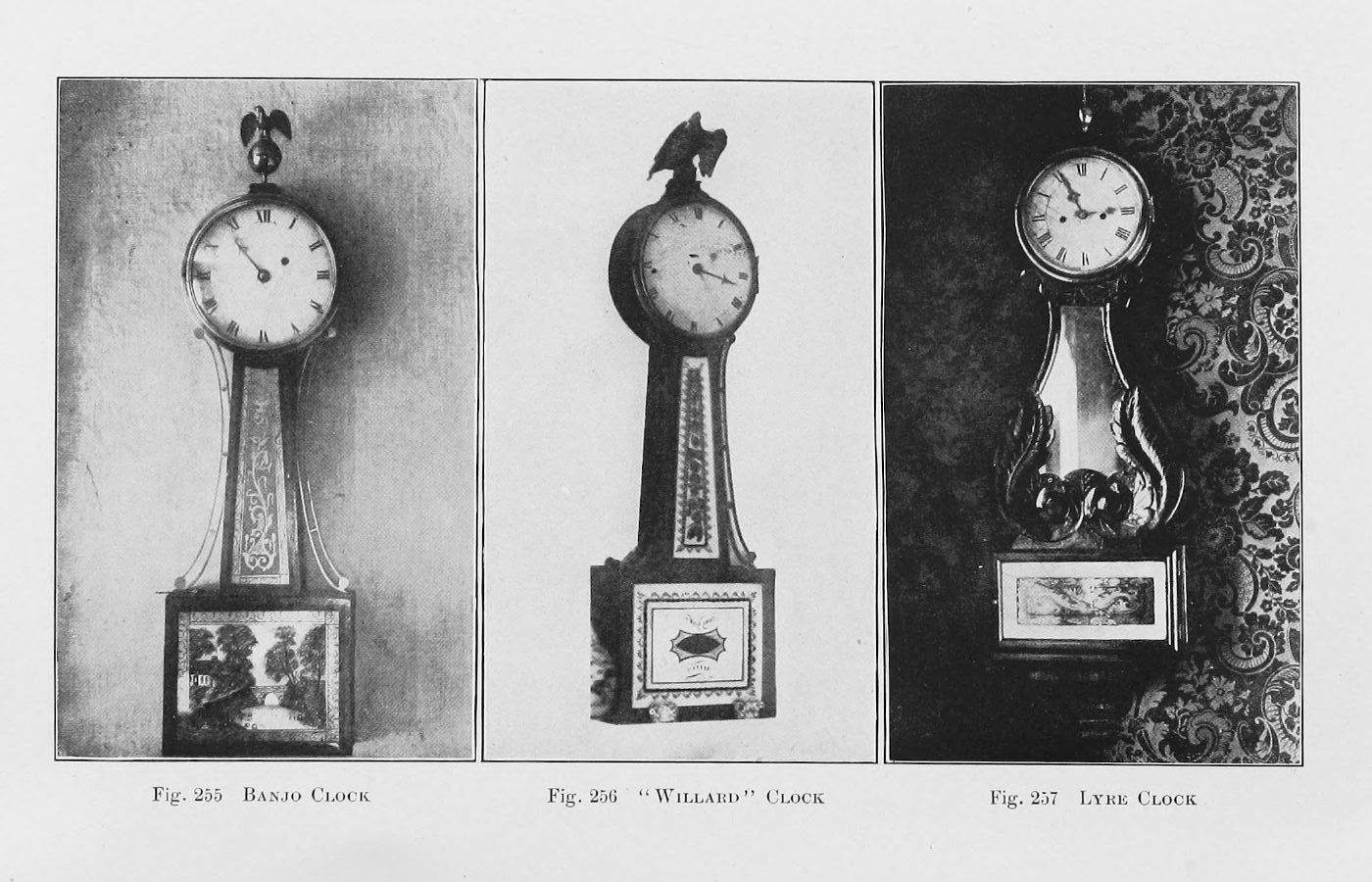 The very fine clock which is shown in the next illus « tration, Figure 257, seems a variation of the banjo design, and this case is also mahogany, handsomely carved. There is no name of the maker on the clock, but inside the door is a record of repairs. The first of these is dated 1808, showing that the clock must have been made some years previously. It has a striking as well as a winding keyhole. It tends somewhat tOwards the lyre shape which was so much affected by Sheraton in his chair backs, and may have been made about 1800. . Another clock, probably of the same period, is shown in the next Figure, 258. with It has a fine mahogany

Empire decorations on it in gilt. The large dial case is clearly marked, and there is but one winding hole. It has an uncommonly long pendulum for a clock of this style, but keeps excellent time.

In Figure 259 is shown an odd clock, made by the Forestville Manufacturing Company, of Bristol, Con necticut. It has a rosewood case, and is even more "banjo " than the banjo clocks of the Willards. It has a view of the Merchants' Exchange, Philadelphia, which was probably taken from one of Child's engrav ings, published in 1829. The dial is very clear, and there is handsome inlay on the upper part of the case. It has brass works, an eight-day movement, and the posts which support the case are tipped with a carved acorn, making in all a very handsome and unique clock. 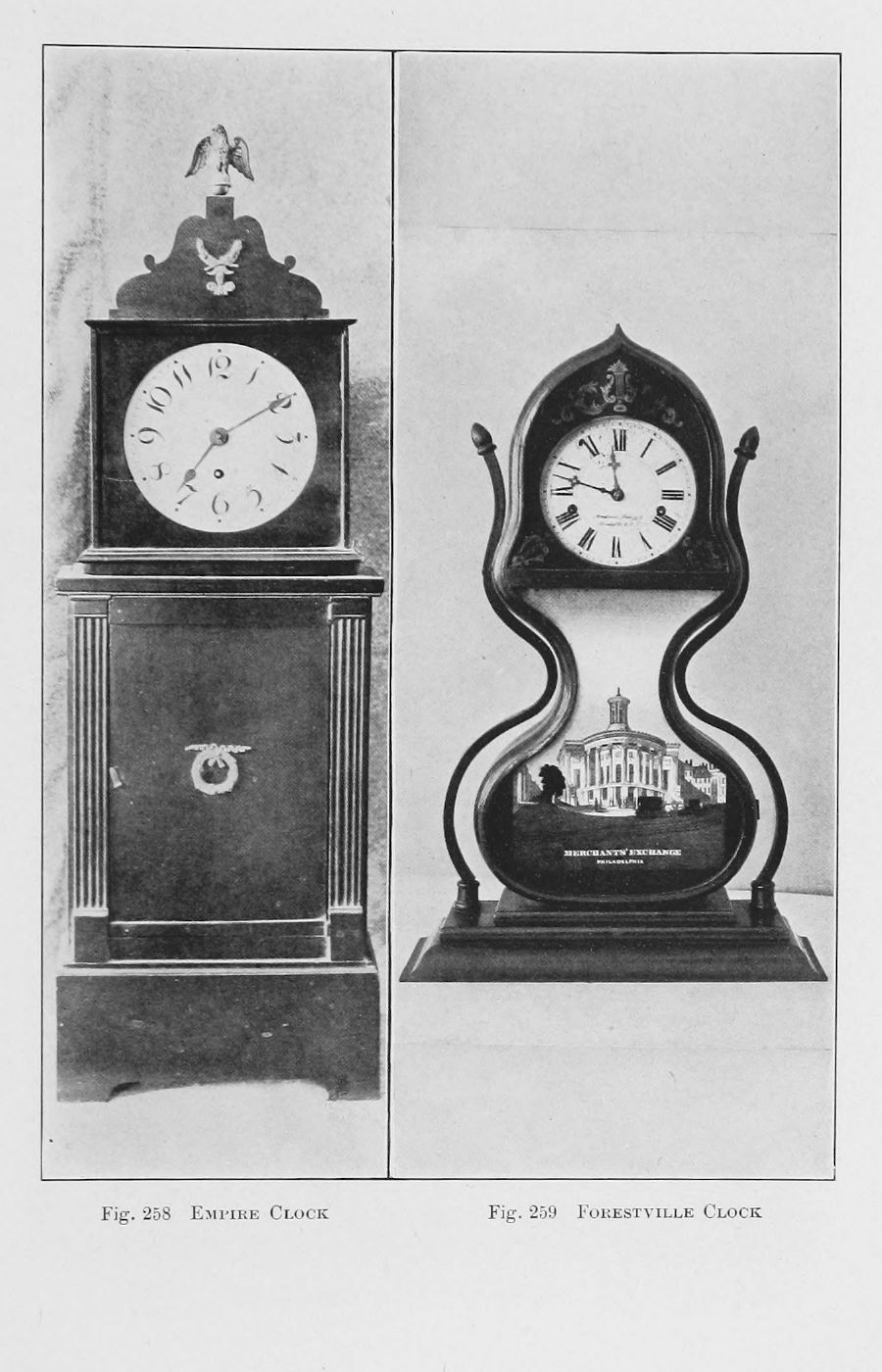 A quaint little clock in an inlaid case, which is about a hundred years old, is shown in Figure 260. It is of SavIss manufacture, has brass works, and keeps time perfectly. It strikes not only at the hour but at the quarter-hour divisions, all except the hours being given in two tones. Like the older bracket clocks it has little screens at the sides to allow the sound to escape, and, as may be seen, it has quite ornate hour and minute hands. 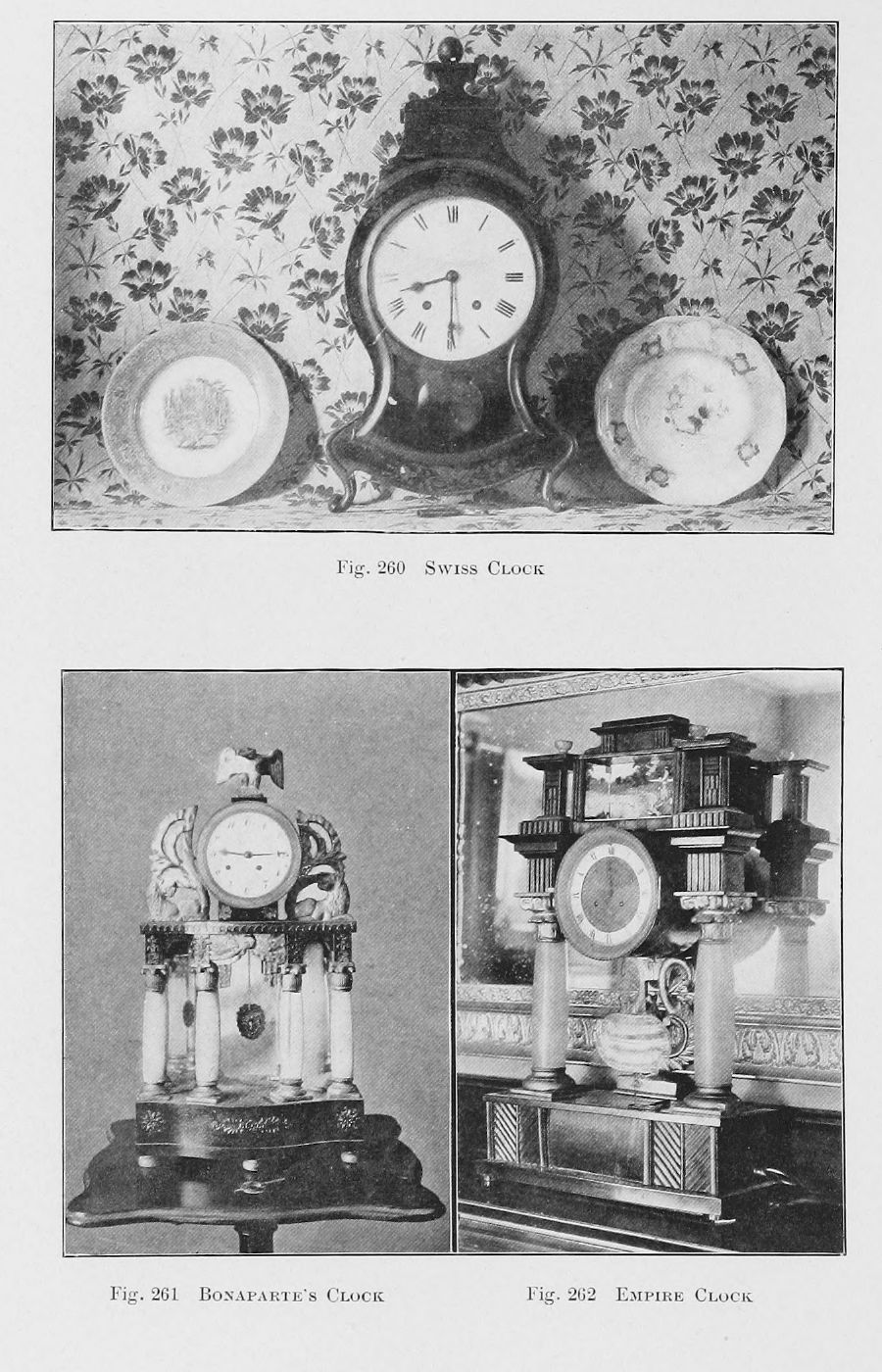 There are to be found, also, in various parts of the country, French clocks of elegant design and workman- ship. Many of these are covered with glass shades to protect them from the dust, and most of them are inlaid or have elaborate carved or alabaster pillars and fine gilt mounts. A very splendid example is given in Figure 261, and the clock has an interesting history. At first sight the eagle at the top would seem to indicate that the clock was for an American, but this is not a Republican but an Imperial eagle. The clock belonged to Jerome Bonaparte, and was brought by him to this country when he came in 1803. After these many years the clock is to be found at the rooms of the Antiquarian Society in Concord, Massachusetts, where it is sur rounded by other relics of equal age but more demo cratic extraction.

The Empire clock shown in Figure 262 is almost a finer specimen than the one which belonged to Jerome Bonaparte. It is certainly in better proportion. As you may see, this one is still filling its function, the cloud about the pendulum showing that it was in motion when the picture was being taken. The alabaster columns are very ornamental, and all the brass work is of the highest order. Sometimes the pendulums of these clocks were in the form of a many-pointed star, and in addition were finely engraved.

America, as I have said already, has done much for the improvement of timepieces. And one can but smile at our eagerness to excel as far as in us lies. We cannot have the oldest things in the world, but we can have the biggest, and we do. For many years the clock with the largest faces in the world was that in the Westminster