A stoneware jug with a pewter lid is shown in Figure 284; and although this one is of Delft pottery, the shape is similar to the English ones, and the tall, grace ful chalice beside it is of a later period, as is the bell, which was used in church ceremonial. Other pewter lids are shown in the following Figure, 285, where, on an old mantelpiece is gathered a collection of objects suitable to their surroundings. T 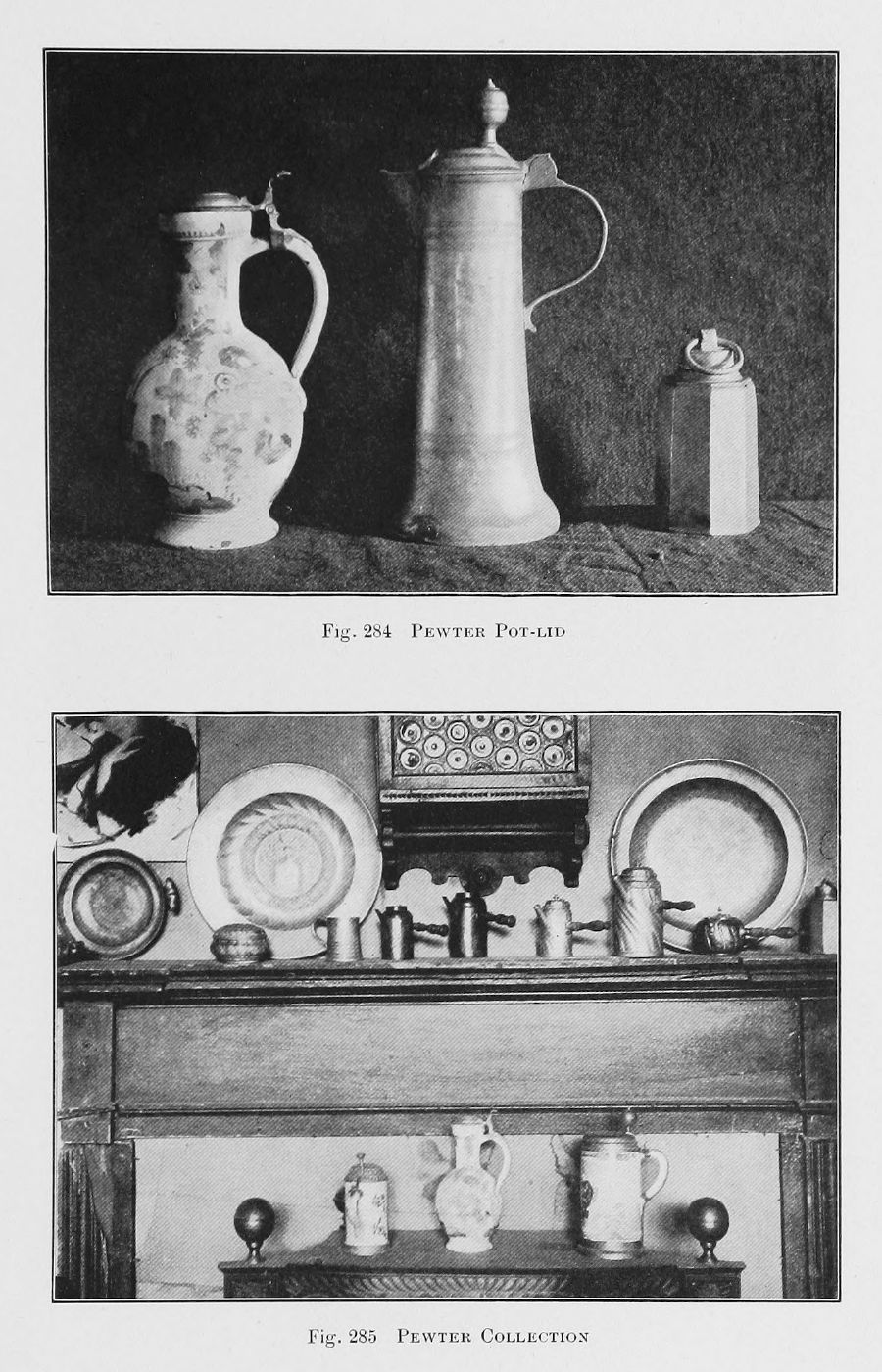 Almost every household has tucked away somewhere, either " up-garret " or in the buttery, one or more pieces of old pewter ware — scarred veterans it is true, but none the less interesting on that account. It seems a long way to go back to that day when Henry Hudson dropped the anchor of the Half Moon in lower New York Bay in search of the first pewter brought to this country. Perhaps 1609 is a little early; yet I have no doubt that among the stores in that ship could have been found pewter plates, and pewter tankards as well.

It is a matter of history, however, that Director- General Wouter Van Twiller reached Manhattan Island in 1633; and one of his first acts, in order to make his people contented, was to erect a great brewery, and "his colonists were never so happy as when draining their huge pewter tankards." So many other, though less durable, wares have been made for our use and con venience that pewter had rather lost caste. In Colonial days it was one of the most important household items. When the Widow Coytemore married John Winthrop in the Massachusetts Colony, she brought him " household stuff " valued at £640, her share of her first husband's estate. The inventory was long, and among its items is one of £135 worth of pewter.

When Governor Bradford died, also of the Plymouth Colony, he left, as specified in the inventory of his property, fourteen pewter dishes, thirteen platters, three large and also three small plates, a candlestick, and a bottle. Peter Palfrey, of Salem, a man of substance in the town, gave in 1662 to his daughter Mary as a wedding gift two pewter platters and an iron pot. Much pewter was made in this country, and the inven tory of a Boston pewterer who died in 1675 shows in his shop 2782 pounds of pewter. This with the dishes and " basons " already made was valued at £235 lis. 4d.

As late as 1750 a complete outfit of pewter plates, dishes, and spoons was considered a lordly wedding gift. Fortunate was the bride who possessed them.

Most of the pewter to be found in this country is extremely plain, gaining its charm from its solid sub stantial lines and charming gray colour. But some of the English and much of the Continental pewter had decoration of one style or another, and one of the sim plest methods may be noted on the chalice in Figure 284. You will see that there are bands of incised lines in three places on the body of the chalice, and on the front a wreath of leaves surrounding a date and initials. This style of work was called gled " work, and was very common on the Continent. Owing to the nature of the alloy, engraved work wears off very quickly, since it has to be very lightly done, for deeply cut work weakens the ware. The tool which is used to make patterns is in the nature of a chisel, the blades varying in length, the common size being about an inch wide. The tool is rocked or jogged along, forming a pat tern which is never of great delicacy; and, although the Dutch and German pewterers seem to have the greatest fancy for you will find that it, has been used in all it countries. The Dutch used on church vessels, long it stories from the Bible and holy narrative being illus trated in it. For such purposes came special tools with blades as fine as thirty-second of an inch; and the pattern was made out withadots in places where was it not convenient to use the tool. 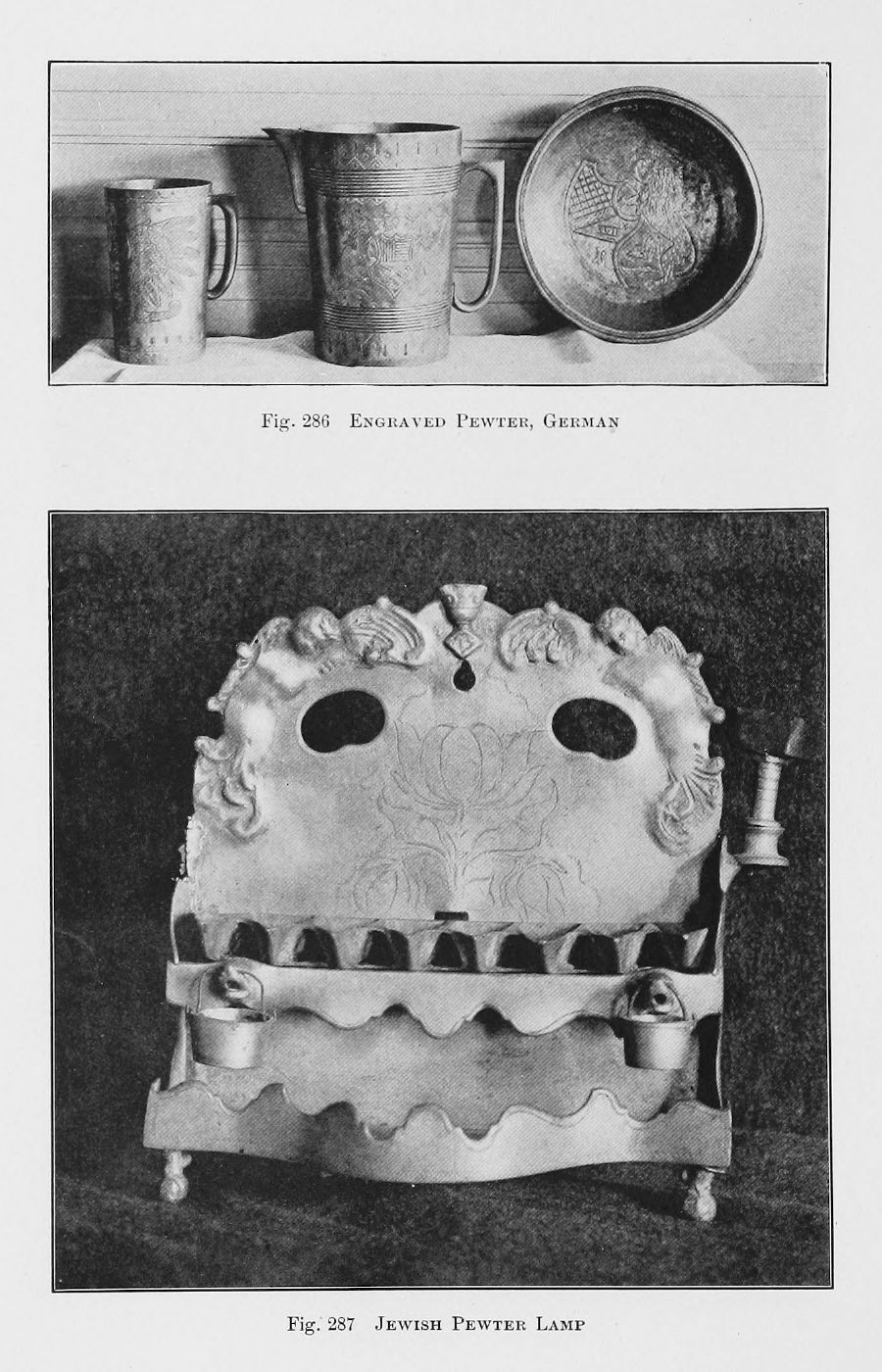 Engraved work was also put on pewter, each stroke of the tool removing some of the alloy; and on some pieces both engraving and wriggled work are combined. In Figure 286 some choice specimens of engraved work are shown, and in the cases of the beaker and pitcher there iswriggled work as well. These pieces are of German make, have elaborate coats of arms on them, and the bowl is dated 1735. All three pieces have a rose and crown on them, which emblems may be found on English, French, Dutch, German, and Scottish ware, though it customary to assign all ware so marked to is and the punch or wriggling tool can be easily told. The latter is held in an upright position and then struck with a mallet. This raises a ridge on either side of the pat tern, while in engraving the pewter is removed.

When modelled and finished with engraving tools pewter may be made very rich and elegant, as may be seen from the beautiful old Jewish lamp shown in Figure 287. This lamp has eight little buckets for holding oil set on a small shelf. There were two others, larger, one of which is missing, at the sides. Observe the beauty of the figures in Ioav relief on the top, and the form of the pomegranate flower in engraved and wriggled work on the plain space.

Tavo other pieces are shown with figures in the next Figure, 288, and these were also for religious purposes, being Benitiers, or Holy-water cups. You may find cups hanging in Flemish churches now, perhaps of pevrter, more likely of china, but not many will be as charmingly modelled as these. Some times these cups hung at wayside shrines; in the case of these shown the one object providing both cup and image, though some of them had a cross in place of the figures.

Many elegant plates or chargers for use on cupboards were cast and then sharpened up with the engraving tool. Such a charger is shown in Figure 289. Har J rison wites, in his " Description of England," of the way the farmer set out his cupboard in imitation of the rich lord aaIio had his set with silver and Venice glass. The yeoman had to be content with less, and used pewter as rich as his purse would allow, polished to the bright ness of the costlier metal. Sometimes this raised work was punched out from the back and filled with lead so that it would not bend; sometimes it was cast solid. Saa-Iss Kaiserteller, as they were named, were very ele gant pieces, showing figures on horseback, knights and insignia, with rich and varied borders; but such pieces are generally museum specimens. 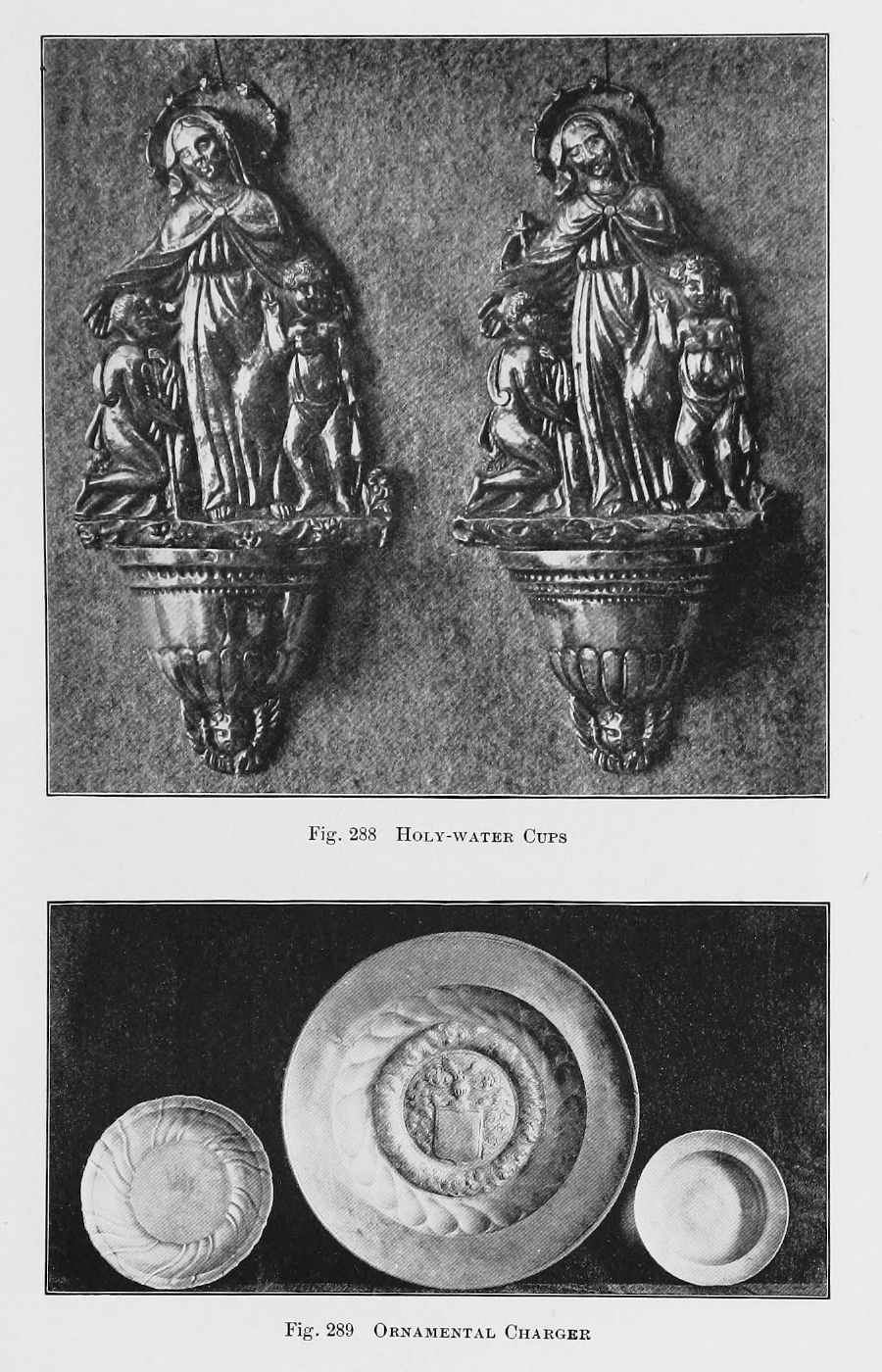 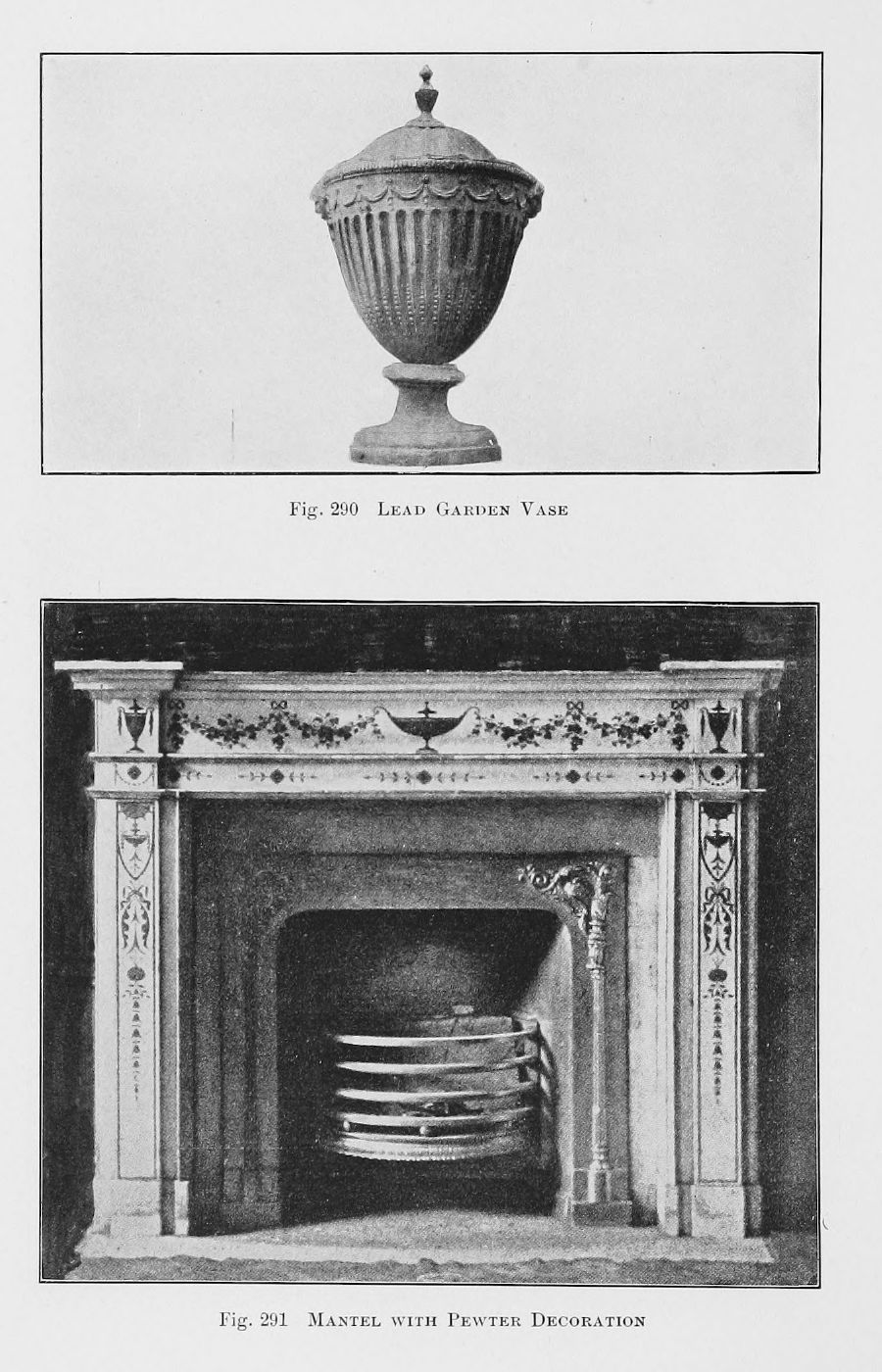