Another use for pewter in its commoner form was for " garden ornaments," figures, vases, or urns, some of which were of very graceful and elegant shapes, and designed by such masters as the Adam Brothers, who put their skill to anything which could be made ornamental, not even the design for a reticule or a fan being too slight a thing for their notice.

Many of the splendid old gardens in Italy and Eng land had these vases on pedestals, and one such, twenty- fh'e inches high, after Adam Brothers' design, is shown in Figure 290.

Pewter was put to still another use by these same skilful men; and in the next Figure, 291, you may see Iioav rich a mantelpiece of white deal may look with a decoration of pewter upon it. They used the classic shapes to which they were so wedded, and the cold gray of the pewter shows out admirably against the wood. I have never seen one of these mantels in this country, but many of them were taken out of houses about fifty years ago in England, and, luckily, some escaped the rubbish pile.

As has been mentioned already, the composition of

MANUAL pewter varies greatly. The very finest pewter is simply tin hardened by the addition of copper and antimony. Ordinary pewter is tin alloyed with lead, which ingre dient is added on account of its cheapness, and is often, therefore, present in excessive amount.

It was this lead which made pewter such a very valu able possession in Revolutionary days. All records of those hard-fought times have frequent references to the scarcity of bullets. In 1777 Madam Smith, wife of the minister at Sharon, Connecticut, invited all her friends and neighbours to come to spend the evening with her, and to bring every pewter article with them which they could possibly spare."

Before the evening had passed several gallons of good bullets had been cheerfully run through bullet- moulds, the good ladies sacrificing without a pang the much-prized pewter. This destruction of household utensils necessitated the making of others, so there were "trencher-bees " instituted, and held from house to house for many evenings. At these the young men of the village whittled and shaped enough trenchers of maple and poplar wood to supply the housewives' needs. The women smoothed down these rough wooden ves sels with broken glass, and polished them witli a sand made of powdered limestone.

Figure 292 shows what was called in old lists "a bason and ewer." Our wash-stand set, while evi dently much used in its day, is in a fine state of preser vation. It is a good-sized pitcher for those days, more than a gallon, even more than the blue 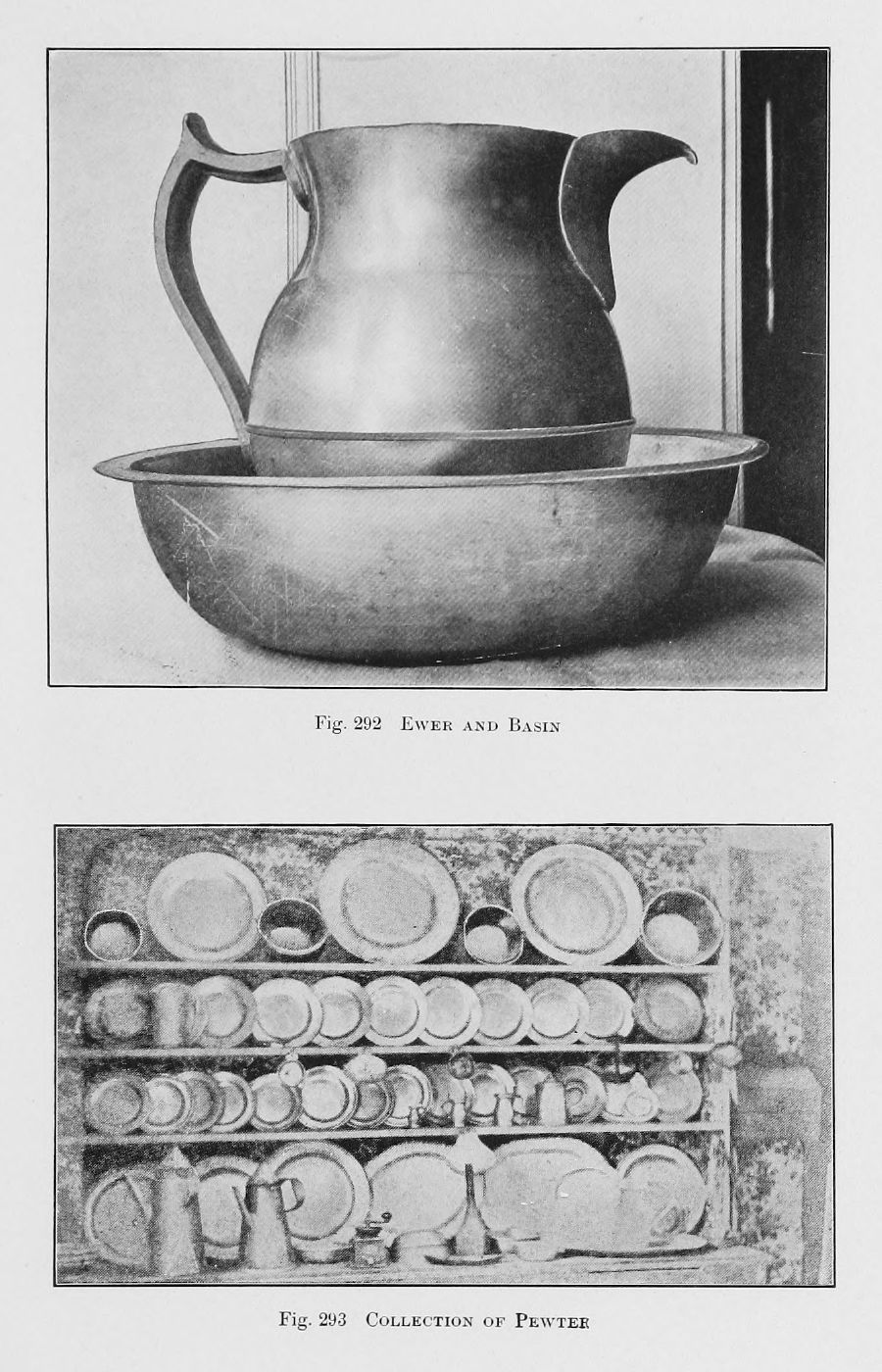 U\m iJR and white Staffordshire pitchers, which were so highly esteemed a little later in the century.

Writing about this ewer and basin some time ago, I mentioned the fact that it was the only one I had ever seen. I have since heard from the possessors of two J . I others, one of them in the far West, who says that his brought there many years ago by Father Ravillac, was a Jesuit priest. It was marked Thomas Boardman, London. Boardman was a well-known pewterer in the last half of the eighteenth century.

Ewers this size —"guinea basons " we find them called in the pewterer's records — were a subject of much importance to the company. It was duly set down just how much they should weigh, and what quality of pewter should be used in them. But while it was possible to hold the London craft up to the mark by means of " searches " (that is, sending the officers to look for unlawful pewter) and fines, it was impos sible to have the country members of the craft under control. For that reason they stinted the amount of tin, made the articles under weight, and in 1726 letter from Philadelphia was read complaining of the bad a quality of the pewter sent to the Colonies from Bristol, England. ""

Why there are not more of these basons and pitchersleft would be hard to say. Perhaps they were it melted up, as were the utensils in Connecticut. It was not only the pewter in daily use which was put in the melting-pot, but every scrap which could be found. Sir John Johnson's house, which still standing in the Mohawk Valley, had in 177 a roof is of lead. This was ripped off and found its way into bullets. So did the lead tablets set into monuments and gravestones. You will see some stones with the vacant spaces left in the old graveyards in and near Boston. On July 9, 1776, the equestrian statue of George III, on Bowling Green, New York City, was pulled down, sent to Con necticut and moulded, so the story runs, into forty-eight thousand bullets.

Fortunately not all the pewter was sacrificed to the god of war. Figure 293 shows a kitchen dresser set

" out with shining pewter all Such a complete set was the end and aim of every good housekeeper. When the pewter had been once gathered together the keeping of it bright was quite a serious matter. This duty fell to the children's share, and on Saturday morn ings they were sent bright and early to the meadows for a supply of " horse-tail " or scouring-rush, stems of which polished the pewter without scratching it. The mothers kept an eye to the use of much " elbow- grease," and there was no escaping for play till the task was well accomplished.

There were more articles of pewter than is ally supposed. Besides plates, platters, tankards, por ringers, spoons, pitchers, and basins there were buckles for shoe and knee, coffee-urns, hot-water dishes, lamps, and candlesticks.

In Figure 294 is a variety of these articles. The coffee-urn is a solid old piece, and belonged to the grandfather of Ralph Waldo Emerson, who built J5L ioL Jf$i the " Old Manse " at Concord, Massachusetts, 1765. 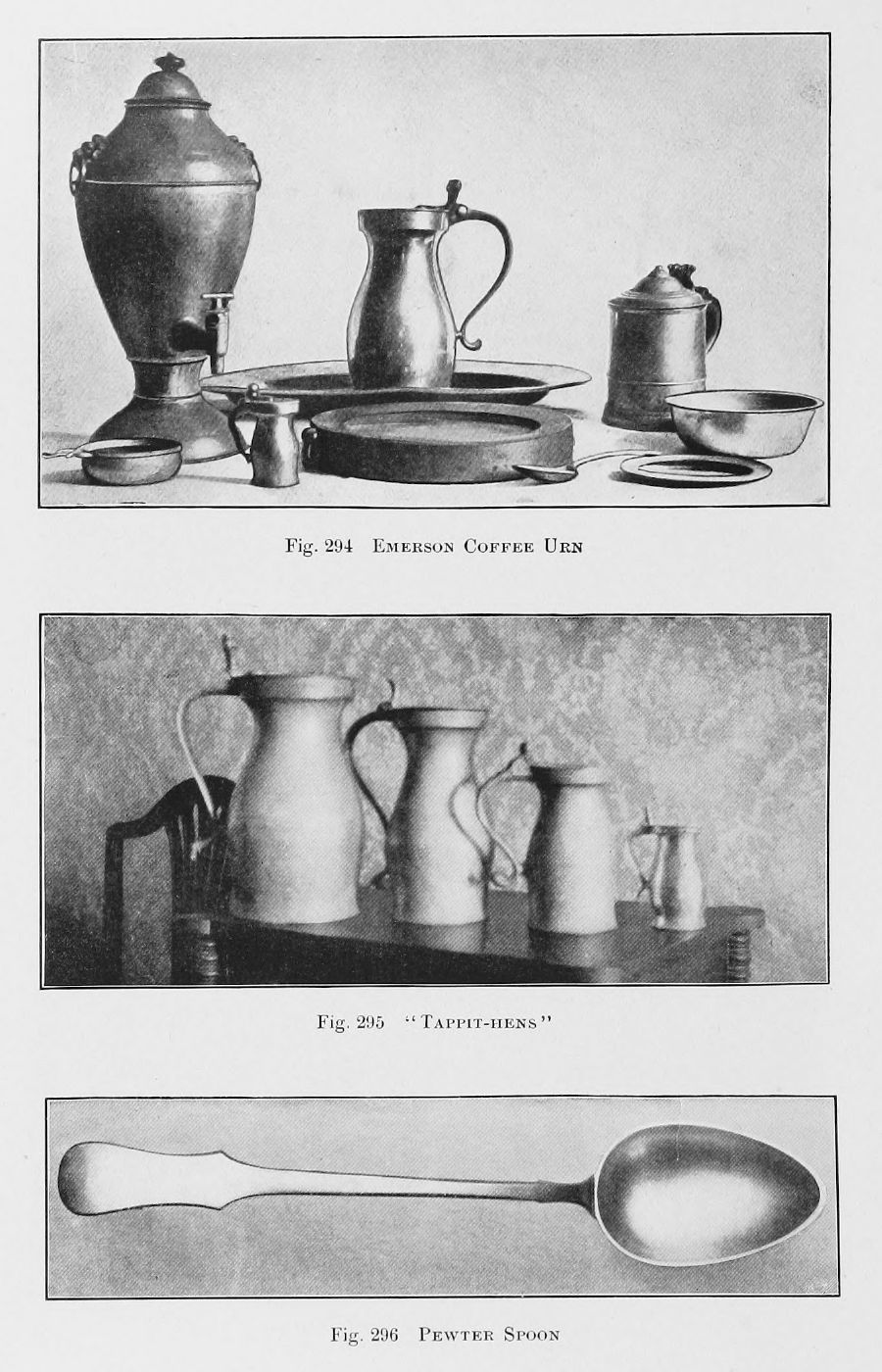 The owner of the coffee-urn was a sturdy and loyal patriot, and we love to think he had a good strong cup of hot coffee before he went out on that historic 19th of April to encourage his parishioners to fight for their liberties and homes. lions'

The coffee-urn is a good piece in itself, for the heads which hold the handles are clearly modelled. The tankard standing in the large trencher is what is known as a " tappit-hen." It is a Scotch piece, and they were generally sold three in a set. There is a very small one seen just in front of the urn. These " hens " are hard to find and rare.

Recently I have learned of two sets in this country. One of them, Owned in Bangor, Maine, is shown in Figure 295. The smallest hen of all does not rightfully belong in the set, but probably from its size was used for hot milk or treacle. I was sorry to hear from the Owner of this set that a portion of them had been buffed. It is a mistake to have your pewter subjected to this process, as it takes off a portion of the surface, and removes those marks of time and wear which no really antique pewter should be without. In fact, it is not pleasant to record that these sets of tappit-bens are being reproduced both in the country of their origin, Scotland, as well as in Belgium. They are being scratched and marred, and in some cases are buried for some months to obtain the proper degree of patina on them. Some are even eaten slightly with acids to give them a cor- roded look. There is no limit makers of spurious goods. The Scotch pewterers generally marked their pieces, for all reputable makers belonged to the " Incorporation