It is ordained by consent to ye hail brethren, that each member shall have one stamp of their owne and present ye same yor to ye house betwixt this and the 2d of February, to ye effect, everie one's work may be known, and that under ye pain of Three Pounds Scots per piece. Whereupon this act is made."

The distinguishing mark of Scotch thistle is the pewter, which has in addition the smaller marks, like hall-marks, and sometimes the maker's name besides. Notwithstanding the fine of " Three Pounds Scots," much pewter is entirely unmarked, and one has to rely largely on its characteristic shape to identify it.

The English tankard in the same Figure, 294, is the shape with which we are most familiar. The lid is cone-shaped, showing that it was not one of the very early pieces, in which case it would have been flat.

The thick dish with handles is a nice piece. It is to be filled with hot water to keep a meal warm. A little slide in the top of the dish can be taken out, and slipped back when the under part is filled. A pewter spoon lies beside it, and gruel basin to the right. One of the a housekeeper's yearly duties was to mould a fresh supply of spoons. They were made of soft metal, and con sequently were easily broken or bent. Spoon moulds were metal affairs and not owned by every family. If one was possessed by a village the hardy pioneers thought it was ample. In a certain Massachusetts vil lage a family whose name began with L, to add a touch of elegance to their table furniture, had the spoon mould made with this initial in the die. It did very well for them, but the whole village also had their spoons marked " L," for they promptly borrowed the new "running." mould the first time they needed to make a Consider the confusion which must have ensued at every sewing-bee or husking when individual possessions were to be sorted out!

A pewter spoon is given in Figure 296 and is a fine one. It is not home-made, nor very old, being made by Reed and Barton, a firm of New York silversmiths, in 1823. Few old spoons are to be found, for they were so easily bent, at least the home-made ones, that they were among the first things cast into the melting-pot to be run Over. I have some spoons, notably one of Belgian make, which is remarkably stiff in the handle, but this is an unusually fine specimen. An amateur, av1io is a busy literary man, writes me that he has been amusing himself with running pewter spoons in an old mould which somebody gave him. He has great diffi culty in arrh'ing at just the proper quality of metal to make them with any degree of stiffness, and some old spoons which he sacrificed had in the handles a bit of iron which gave them the desired body. The formula for spooning pewter takes a large proportion of lead which is the cause of the brittleness. have also an old I home-made pewter spoon which came from Maine. I have never been able to bring myself to use for am it, I quite sure that any strain on the handle would be fatal to it.

A spoon does not seem pewter thing which would survive centuries, even though buried in the mud of a a rh'er bed. Yet within the last year one has been recovered from the Thames, at London, in quite perfect condi tion. The handle of the spoon bears on the end the a head of woman with the head-dress which was worn a in the time of Henry V, that from 1413 to 1422. Three more spoons of this period are knoAAm; one is in is the British Museum. The bowl what was called the "plover's " is egg shape, larger at the end than at the place where the handle joins the bowl. Nearly all pewter spoons have what is called a rat-tail running up the back to ghe added strength, and the top of the handles varied as did the patterns of the silver spoons of cor responding periods.

A unique piece of pewter is shown in the next Figure, 297, and bears on the front the words " Mudge's In haler." It in the nature of a trick mug, for the handle is isIioIIoav with holes near the top, and if you do not put your finger over them, the liquid spills. The name of the maker on the bottom, but inquiries at the number on Fleet Street is have failed to find the date of his being there, the tax rolls for the nineteenth century not bearing Fig- 299 Bowi.s and Boxes his name. It has had a strange history, this old mug, and at last was found on a rubbish pile by a collector aaIio adds to his gatherings all the things of interest which he meets with in his travels. It is a good piece, and a puzzle in more ways than one. 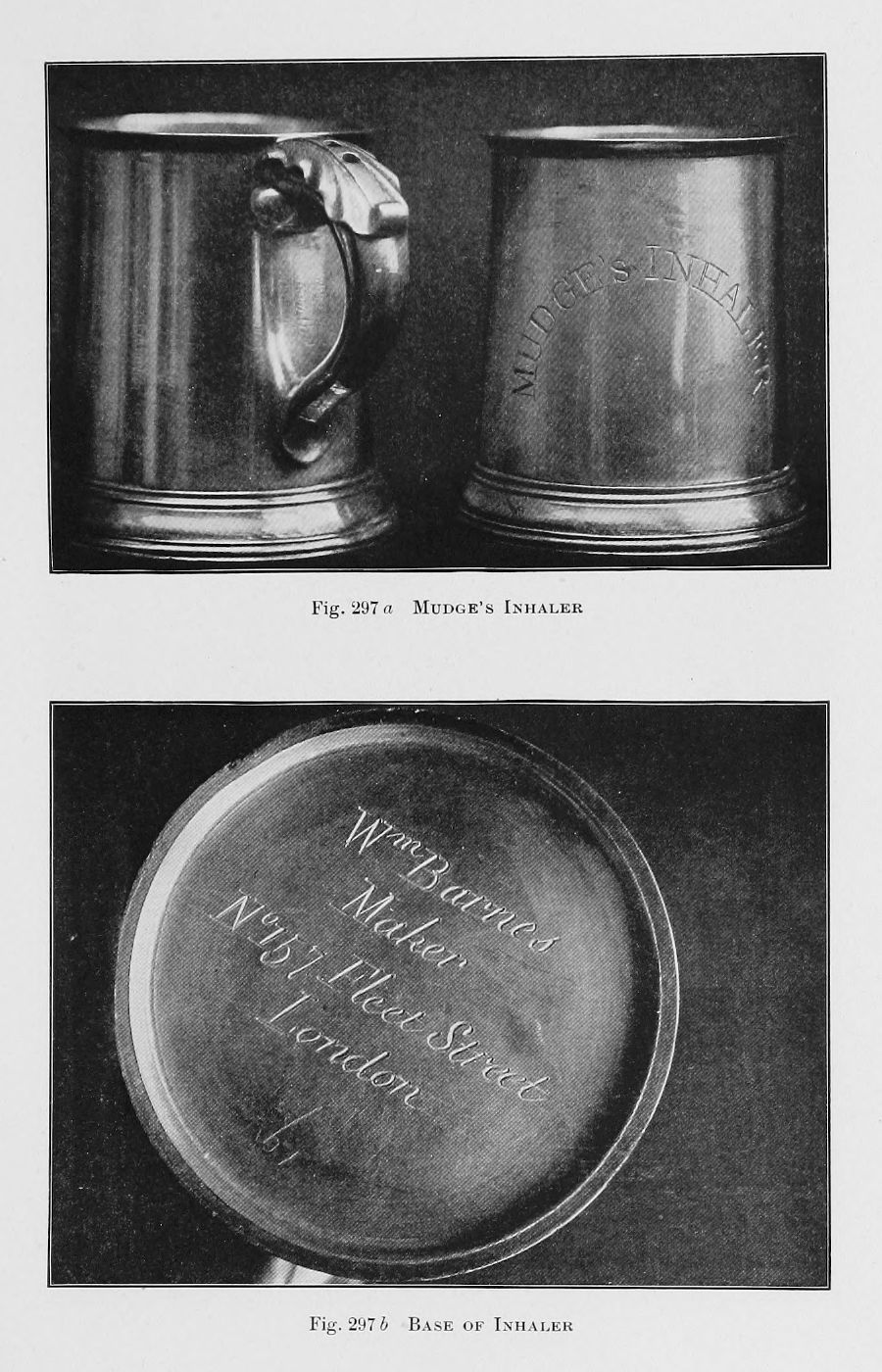 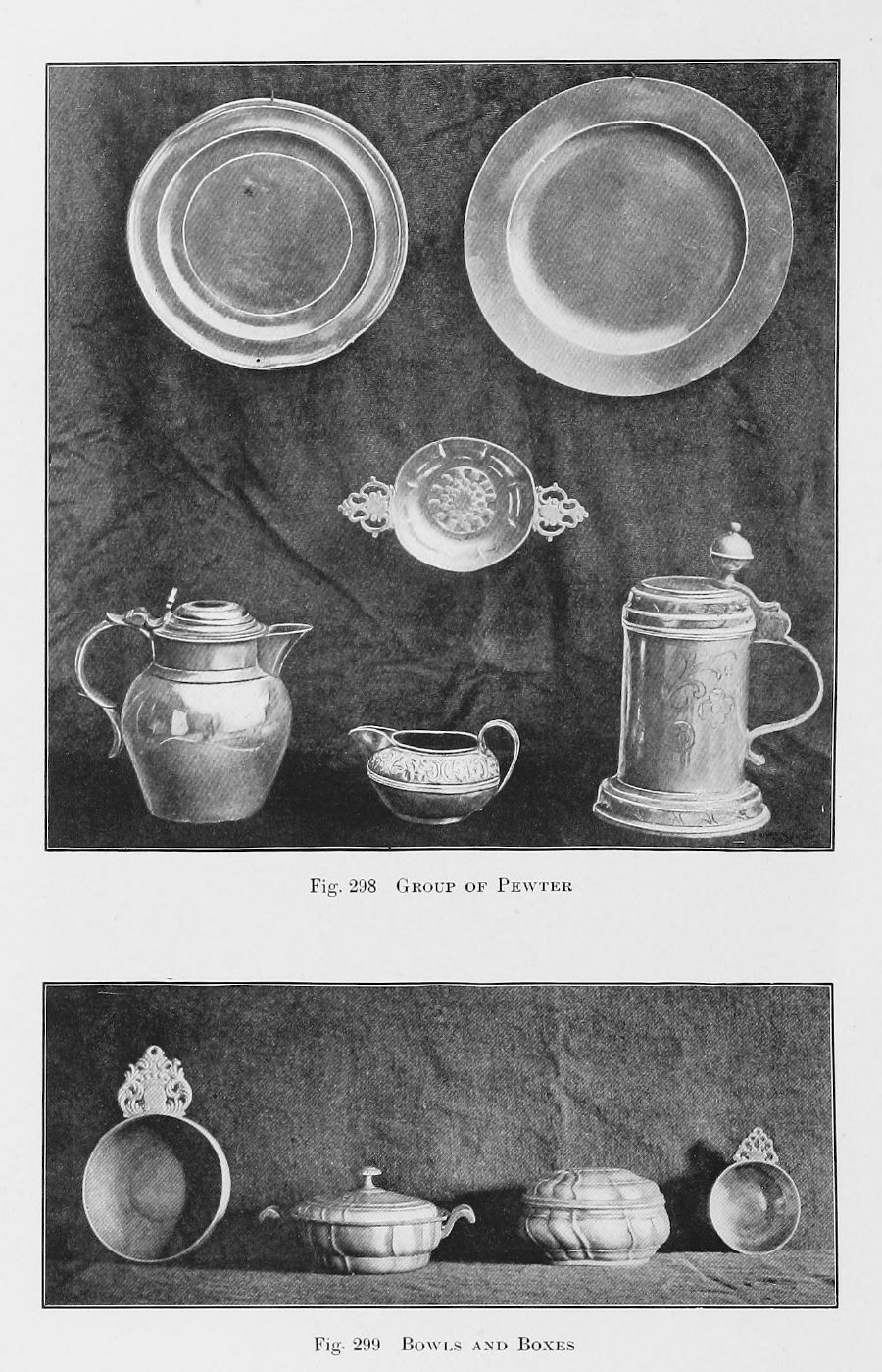 Barnes is not a name to be found in the list of mas ters and wardens given by Mr. Welch in his transcrip tion of the records of the Pewterers Company, but there were many names of workers which did not appear therein. There are often names on old pewter, and though in many cases it is nearly obliterated, there is often enough to enable one to piece it out. There was Townsend and Compton, who were at work in 1750, and the Jacksons, father and son; Lucas was another familiar name, Fly and Thompson, 1740, John and William Fasson, Henry and John Appleton, Joseph and Samuel Barker, Bennett and Chapman, Thomas Board- man, 1746, and hundreds of others. These men, besides the rose and crown, added their own names and often a large X which denoted " best quality." "Paris"marks varied, sometimes an angel with the word

Paris in a crown, more often a fleur-de-lis, and the inevitable crowned rose all are to be found. The Brussels rose is six petalled, crowned, and there is a fiffure of St. Michael and the Dragon in a beaded circle, and also a gothic B to be found too. Antwerp has the rose alone or crowned, and an arm and hand. There is a large amount of Belgian pewter to be found in this country, particularly near the early Dutch settlements.

In Figure 298 we show a Dutch tankard, dated tJR 1747, and marked with the flying angel of Brussels. It is a handsome piece with an ornamental incised pattern, and a motto in Dutch on the front. An English hot- water kettle faces it, and between the two small is a English creamer with a fine band of repousse work sur rounding the top. The little two-handled bowl rather unusual piece is a o also, on account of the carved work in the bottom.

The worn old plate at the top has personalahistory of its Own which makes each scar and dent of extra value. It belonged to the Rev. Samuel Kirkland, who took up his residence about August 1766, at Kanon-

1, warohale, the chief village of the Oneida Indians, about twenty miles west of the Mohawk River. Mr. Kirkland went as missionary to the Indians, and lived among and with them. He built house for him a self, " through constant and very hard labour," he writes, " digging the cellar, hewing and drawing the timber with his own hands."

He married Jerusha Bingham in September, 1769, and now deemed it expedient to enlarge his house, making it sixteen instead of ten feet square. By 1770 his salary had been raised to £130 year, and he was