Other humble lamps are shown in the next illustra tion, Figure 305, of pewter also; the swinging one was able to do duty as a hand-lamp when not wanted on the wall. The little lamp in the foreground ~\r\ was for bedroom 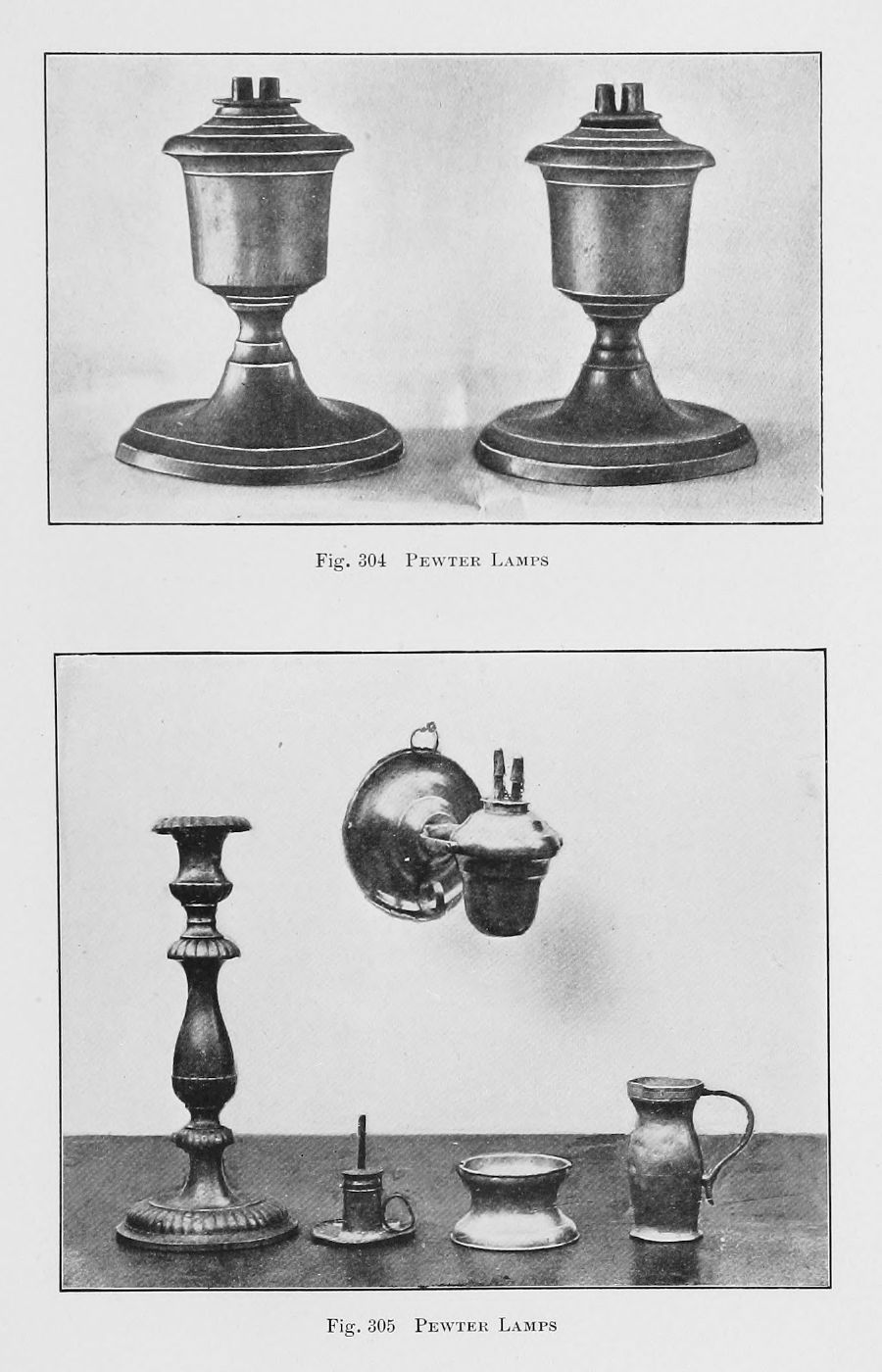 CD " camphine," use, and may have been used to burn as spirits of turpentine was called when used for lighting purposes; this gave a very white light, though extremely volatile and inflammable. It is not so very many decades since camphine was used in towns and villages; for only the other day a man in middle fife told me that he remem bered well being sent by his mother to buy camphine when he was a small boy, and of her particular injunc tions not to spill it. He lived in Utica, New York, which considered itself quite a town. The earliest use of camphine was in 1834.

It was rather fortunate that our ancestors generally rise," followed the custom of " early to bed and early to or their eyes must have suffered from such poor and insufficient light. However, they were not bothered with a multiplicity of books, nor a dozen daily newspapers; and a single candle was enough to spin by, or to sit at rest on the settee and watch the fire crackle on the hearth. Indeed, this same candle would gh'e light enough to compound a " night cap " of flip, to see when the logger head was red-hot, and that there were proper propor tions of sugar and spice, pumpkin chips and beer, or whatever other personal touches went to the mixing of this favourite brew.

An unusually fine piece of pewter of German make appears at Figure 306. There has been a very large and very handsome mark on the bottom, but some parts of it have become quite obliterated. It is a soup tureen and tray, the tureen being capable of holding three or four quarts. The design on the cover, the knob, and the handles are not common in this material, except in such pieces as are of the very choicest quality of plate pewter. This is a very rare and extremely choice example, and one rarely comes across a piece like it that is not a museum specimen. In fact, this specimen comes under that heading, as it belongs to that small and choice museum of antiques which is being gathered by the Misses -Hewitt at Cooper Union, New York City. Most of the early churches in this country had for their first communion sets those made of pewter, and it was generally all they could do to buy two tankards, a laver, and a round trencher. The cups were contri buted by such of the congregation as were able to afford it. There are the remains of such a service at the Con cord Antiquarian Society, and another at Deerfield, Massachusetts. As soon as possible the congregation obtained sih'er services, and the old pewter ones were turned adrift. We have heard of portions of such ser- vices, marked, turning up in a pedlar's wagon, and being rescued from oblivion by a good churchwoman of another creed. 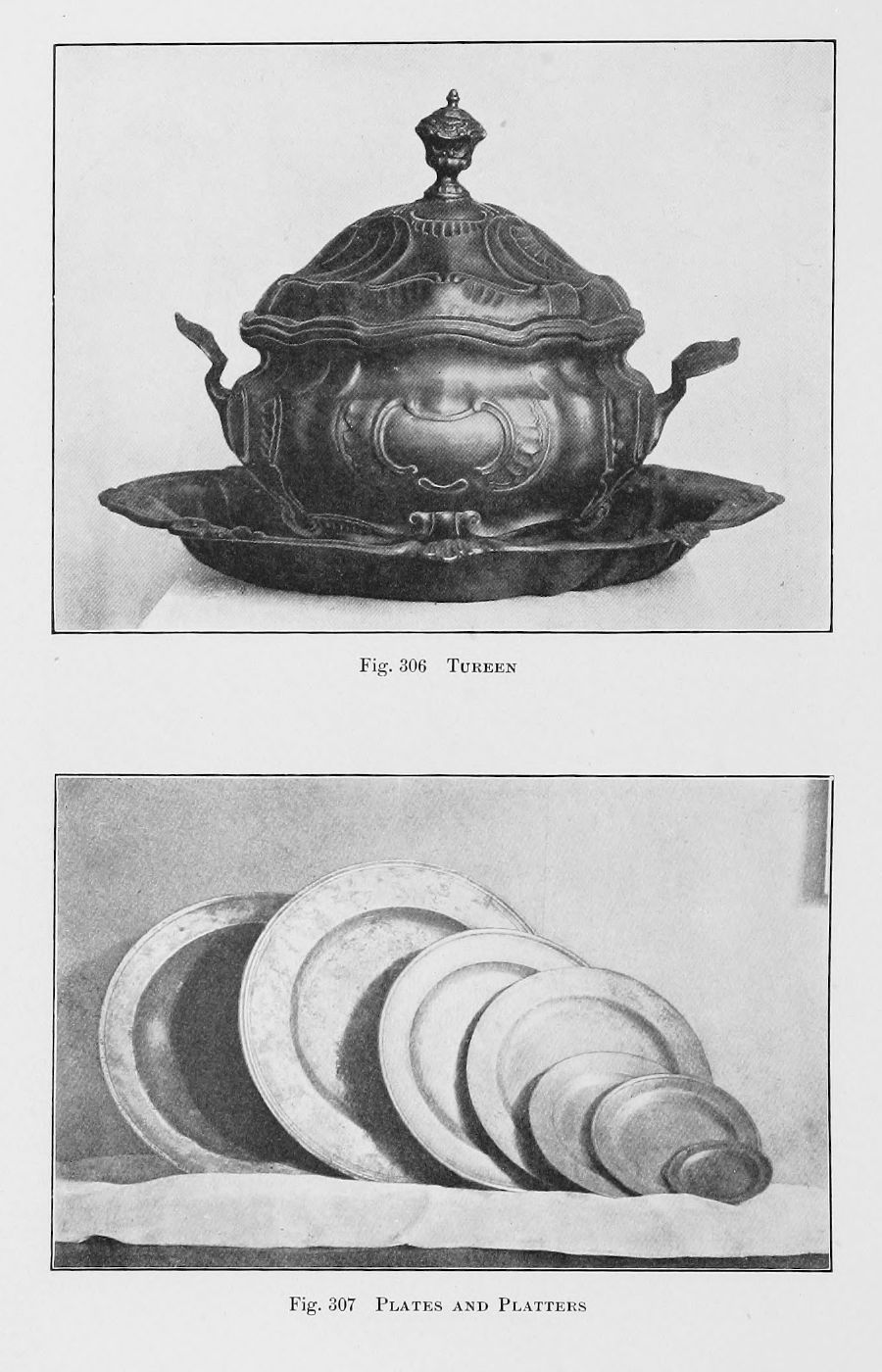 It is rather safe to buy old pewter, if the price is moderate, for it has not been made to any extent during the last seventy years. Even the very method of mixing o the metal and handling it seems quite forgotten, and cheap china, earthenware and glass have taken the place of a rich and silvery metal.

In Figure 307 is shown a set of platters and plates, the Oval shape of platter to which we are accustomed coming in with china war e. The stew of meat and vegetables which composed the principal dish at the family dinner was put into one of the big trenchers, and all dipped in with their spoon or two-pronged fork (but these were a later fashion), and felt no worse for the community of interests.

The parents sat at the table, but children stood, as was considered only respectful; or, if they were much cod dled, three-legged stools were provided for their use. They grew up straight backed and sturdy in those days, and woe betide the child that complained of feeling sick ! A good dose of treacle and sulphur, catnip tea, or rhu barb, and an extra rub on the pewter, were the remedies applied.

Of the amount of pewter made in this country it would be hard to make an estimate. We began at it early, too, and in 1754 the London Pewterers appointed a com mittee to see if the exportation of moulds, tools, and utensils into " fforeign Markets " could not be pre- vented, since " they would soon render it impracticable for very little if any English Pewter to be vended in fforeign Markets."

Pewter was on sale in all the large cities here. About this same date Mr. Kirby, a well-known pewterer, ad vertises that he takes " bees-wax and old pewter in exchange for new."

Peter Faneuil, who gave the historic old hall of that name to Boston, Massachusetts, died in 1742. His in ventory was so long and elaborate that it is classed under one hundred and fifty-eight different heads. He had large quantities of brass, copper, and pewter goods, valued at over £200.

Pewter cisterns for holding water are also mentioned in these old inventories, but they are seldom met with. Boardman and Company made much pewter in New York. Fifty years before this, in 1743, John Halden advertised that he made and sold pewter ware of all kinds at Market Slip, New York. There was Robert Boyle, 1745, William Bradford, Francis Bassett, Henry Will, and Malcolm McEwen, all to be found in New York, and all ready to make pewter utensils to order or to sell you from their stock. By 1841 the last men who had retained this trade no longer advertised them selves as peAAi;erers, but were ready to show Britannia ware of the newest patterns, and fresh from Birming ham or Sheffield. ¦f\.is±