At the first glance it would not seem that there was very close connection between these two objects, but the sideboard is the direct out growth from the side table. When some enthusiastic furniture collector tells you that he has a sideboard three hundred years old, do not believe him, for there were no sideboards then, no, nor a hundred and fifty years ago, either. The earliest ones are not more than one hundred and twenty-five to thirty years of age, and such antiques as these are few and far "up." between. None of them are to be picked I

In order to get a clear idea of the matter, am going to begin as far back as those days which seem so remote to us, before the Mayflower had begun her perilous voyage across the sea.

The very earliest form of table was a board on trestles. This was used for eating from, and since the small number of dishes and trenchers could be placed on it at once, there was no necessity of any side table. Conveniences increased, elegancies crept in, and the time arrived when it was necessary to have an extra table to place the table furniture upon, and on which to display the plate and cups when not in use. The trestle-table, with its bench or form, was early in use in England. It was mentioned in inventories by 1530, and the seats were placed on one side only, the other being unoccupied, so that those at table could be conveniently served.

These trestles and boards are still preserved in some of the old English dwellings, particularly in those which have been held in one family for several centuries. In Berkeley Castle, near the Welsh border, are antiquities of all kinds, for the castle has been in the possession of the Berkeley family since about 1260, with the exception of a few years when it was confiscated by the crown. In the vast dining-room, which is really a hall in size and lofty grandeur, the modern dining-table looks lonely enough. But, when the castle was a feudal stronghold, hundreds have no doubt sat down to meals there, and there are standing against the wails boards and trestles which have come down with the castle, and which are black with age. These are used now when a large company banquets there, for the family pride themselves on their adherence to old-time customs.

Matthew Parker, Archbishop of Canterbury, was born at Norwich, England, in 1504. He was appointed chaplain to Anne Boleyn, that unfortunate wife of Henry VIII, and later held high state at Canterbury, to which bishopric he was appointed in 1559. To give some idea of how these princes of the church lived, I quote the following from " Strype's Life of Parker":

"In their daily eating this was the custom. The steward, with the servants that were gentlemen of the better rank, sate down at the tables in the hall at the right hand, and the almoner, with the clergy and other servants, sat on the other side. Where there was plenty of all sorts of wholesome food, both for eating and drinking. The daily fragments thereof did suffice to fill the bellies of a great number of poor hungry people, that waited at the gate. And so constant and unfail ing was this great supply at my lord's table, that whosoever came in either at dinner or supper, being not above the degree of a knight, might here be entertained worthy of his quality, either at the steward's or at the almoner's table. And more over it was the Archbishop's command to his servants, that all strangers should be received and treated with all manner of civility and respect, and that their places at the table should be assigned to them according to their dignity and quality, which redounded much to the praise and commendation of the Archbishop. The discourse and conversation at meals was void of all brawling and loud talking; and for the most part con sisted in framing men's manners to religion, or in some such honest and seeming subject. There was a monitor of the hall. And if it happened that any spoke too loud, or concerning things less decent, it was presently hushed by one that cried silence."

"Holinshed's Chronicles" (about 157), which are great sources of information about life at that period in England, Scotland, and Ireland, has this about breakfast:

"Heretofore there has been much more time spent in eating and drinking than commonly is in these days; for whereas of old we had breakfasts in the forenoon, beverages or nuntions after dinner, and thereto rear suppers generally when it was time to go to bed, — now these odd repasts, thanked be God, are very well left, and each one in manner (except here and there some young hungry stomach that cannot fast till dinner time) contenteth himself with dinner and supper only."

There is also an ancient manuscript of the Percy family which relates to the family during the sixteenth century, and which gives in detail the bill of fare of the family, throughout the whole year, and shows what appeared on the table-boards of the nobility at that time.

It gives not only the meals for the Earl and Countess, but for the children of the family as well. "Breakfast for my Lord and Lady, during Lent.

First, a loaf of bread in trenchers, 2 manchets, a quart of beer, a quart of wine, 2 pieces of salt fish, 6 baconn'd herring, 4 white herring, or a dish of sprats. Breakfast for my Lord Percy and Master Thomas Percy.

Item, half a loaf of household bread, a manchet, a bottle of beer, a dish of butter, and a piece of salt fish, a dish of spratts, or three white herring. Breakfast for the nursery, for my Lady Margaret and Master

Ingeram. Item a manchet, a quart of beer, a dish of butter, a piece of salt fish, a dish of sprats, or three white herring."

And except for the season of Lent and fish-days, the ordinary allowance for the family was as follows: "Breakfasts of flesh days daily throughout the year. For my

Lord and Lady. First a loaf of breade in trenchers, 2 manchets, a quart of beer, a quart of wine, half a chine of mutton, or else a chine of beef boiled. Breakfasts for my Lord Percy and Master Thomas Percy.

Item, half a loaf of household bread, a manchet, 1 bottle of beer, a cheeking, or else three mutton bones boiled. Breakfasts for the nursery.

Nothing very dainty, truly, for the nursery or the great hall! "A manchet" was a loaf of fine white bread, which denominated " seems something choicer household bread." than what is Wm There was nothing known at this period but the trestle-board, and few of them are left even in Eng land, while in our own land, where so few things are kept, except in some conservative old families in New England and the South, the trestle-board was chopped up long ago, and I know of but two really old ones which are still preserved, even though they have been banished to the attic.

Robert White, of Essex, England, had a very long inventory attached to his will, which was filed in 1617. He gives to his son, John White, " the ioyned stand- inge bedstead w'ch is in the parlour, with the feather bed, flockbed, bolster covering, with other furniture thereunto belonginge. Alsoe the presse cupboard, the cupboard table and my newest chest, all which are in ye parlour, to be delivered him after the death of my said wife Bridgett White, or instead thereof the sum of 2 marks of like lawful moneye."

In a will executed in Devonshire, England, dated July, 1617, is this item: " To my sonne William my tableboard in ye hall. To my daughter Susan my Cribbone in ye hall." I have never yet been able to discover what the latter article was. Among the un expected kinds of tables which "£3," I find inventoried is, 1 old Billyard table, which Francis Hulin, of New York, bequeaths in 1704, showing that these tables had been in use earlier than this, since he classes his as old.

In Figures 1 and 2 are given the second step in table growth, both of these dating to about 1600, the smaller table being the style which was used in private houses, with the joint stool to sit on. The larger one, generally called a " cavalier " table, was in use at the inns, and one can almost see the cavalier himself coming in and throwing down his feathered hat, and crying, " A cup of wine, landlord," just as they do in the play. It would not seem to offer much inducement to finger long over the meal, for a more uncomfortable object than that stool it would be hard to imagine.

The baluster table in Figure 3 was in use about fifty years later, that is, by 1650, and like the two preceding ones, of oak. The legs of all three are turned, and the carved decoration of the familiar patterns which we have found on chests of the same period. baluster table ten feet long, and the ends may be The dropped if a shorter table desired. is This seems to be the first type of distinctively serving-tables, Figure 1, and Figure 2 as well, being properly dining-tables.

The one given in Figure 4 is a very early type, and shows that the idea of having a place in which to keep the table linen and other table furniture was taking hold, and that the familiar chest was no longer all- sufficient. The panelling of the drawers of this table, the bail handles, which were fastened in with twisted wire instead of screws, and the turned legs, — all place it in the last of the seventeenth or early in the eigh teenth century. The wood is oak, and there are two panels to each drawer, and three styles of ornament are used in these panels. These drawers were used for plate or linen and, as you see, could be locked. With time and wear the wood has grown very black and almost as solid as iron. 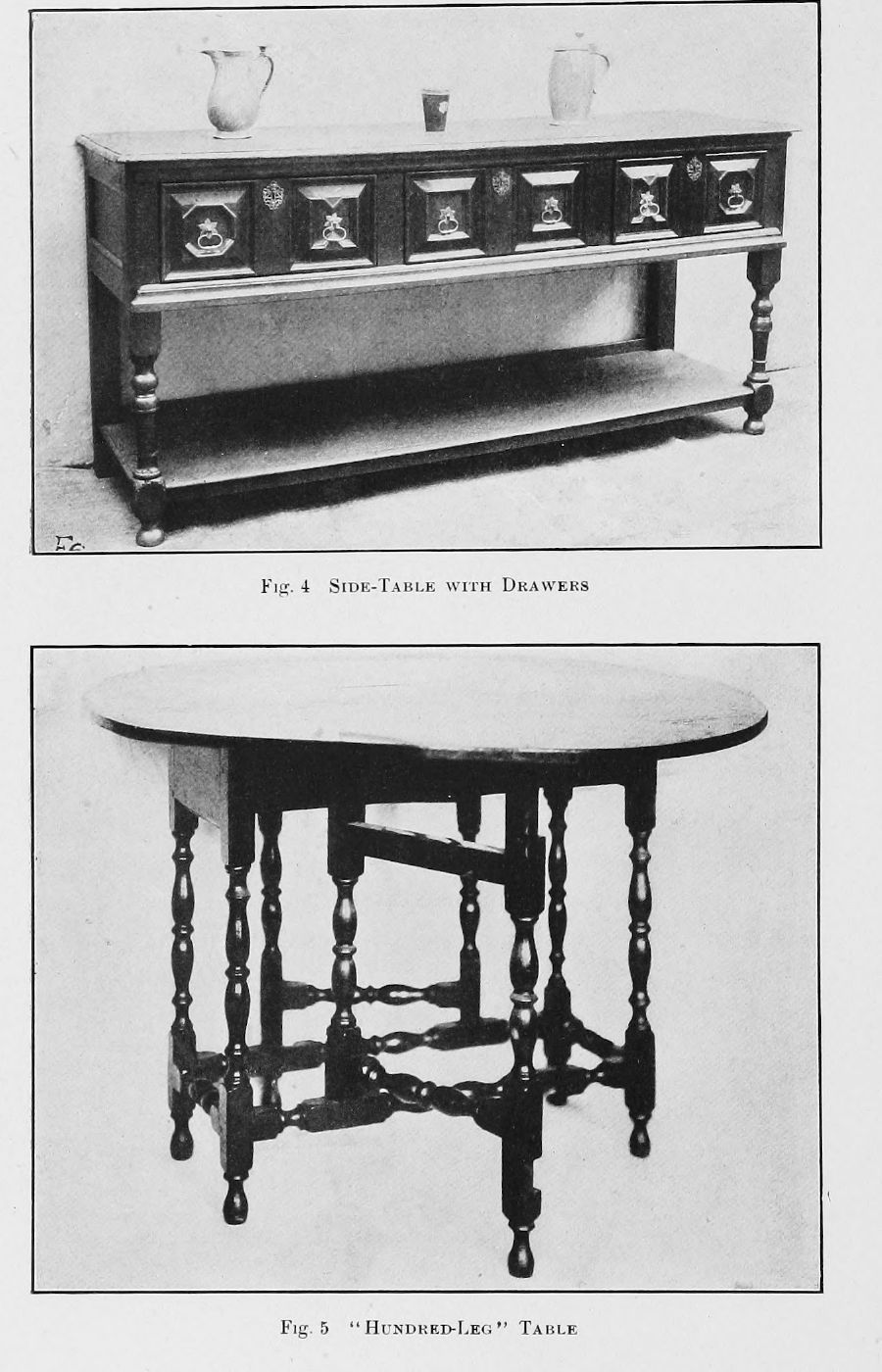