Occasionally in an English inventory prior to 1700 reference is found to a " sideboard table," which was like this, no doubt, and I find them mentioned here as well. In the early days of this country, and in Eng land too, the inn was the most important house in the village, and the innkeepers, many of them, were more than comfortably off, and for the convenience of their patrons had many things not to be found in middle-class homes. Some of the famous old inns, which have been carefully restored, have still enough of their old-time comfort clinging to them to justif y this conclusion, and if you should visit, for example, the Wayside Inn at South Sudbury, Massachusetts, or the Red Lion at Stockbridge, in the same State, you would find choice pieces of old furniture in mahogany, and the delight ful old china for which so many of us are eagerly striving. But these inns belong to the eighteenth century.

Before me lies the inventory of the estate of William Trask, who kept the famous Black Horse Tavern, in Salem, Massachusetts, and whose will was filed March 28, 1691. The whole estate was valued at £413, — a round sum for those times, and one rather wonders where he stowed away those travellers who wished to remain all night, for there must have been some such, even taking into consideration the poor roads and the dangers of going far from settlements at that time. A portion of the will is as follows: Imprimis. A dwelling house, one barn, one orchard, and ye upland and marsh adjoining Parlour. 1 standinge bedstead, and feather bed and beding 6 00 00 1 trundle bedstead, featherbed and beding 4 00 00 1 longtable and forme 12 00 1 cupboard, 8 chairs, 1 wainscot chist, 1 box,

Goods in Kitchen. Brass and Pewter, 2 Iron Potts, 1 pr. Iron doggs, 2 hakes, 1 pr. tongs, 1 Grid Iron, fryeing pan. There was, besides, one old feather bed and bed ding, and this was the entire furnishing. Of course, the chief room in the house was the taproom, and all the furnishings that he had in any great number were bottles; and it is specified with some particularity that they were of glass, for leather bottles were also in use; and in Heyward's "Philocothonista" I find the "Other bottles we have of leather, but they are most used amongst the shepherds and harvest people of the country. Small jacks we have in many ale-houses of the cities and suburbs, tipt with silver, besides the great black jacks and bombards at the court, which when the Frenchmen first saw they reported, at their return into their countrey, that the Englishmen used to drinke out of their bootes."

Fifty years later saw a great difference in the fur nishings which were OAAmed by a successful Boniface. In 1730 Abel Chapin died in the little town of Chico- pee, Massachusetts, and he had grown rich in keeping an inn. The imrentory of his estate contains six hun dred items, among them being thirty-six linen sheets and six tablecloths. In the pmTate home it was long before the separate room was used for dining. If the warm and comfort able kitchen was not used, meals were served in the "great or the hall, which was a much more important part of the house than we make it. At first, even in manor or castle, there was but a screen put up to furnish pmracy for the family, since the retainers and men-at-arms all ate in the same room and at the same time as the family. Little by little the dining- room gained favour, and even then held a bed, along with the Flanders' chests, forms and joint stools, and the long table-board.

The dining-table, which was in use at this time — that is, about 1650 — and for the next fifty years, is shown in the next figure, No. 5. It is variously known as the "gate-legged " or the hundred legged table, and it was one like this, made of oak, which had a place in the dining-room of William Penn, though his had fewer legs.

About the middle of the eighteenth century there were improvements in the serving-tables, as can be seen in Figure 6; for this has two leaves, which can be pulled out, so that its capacity can be increased. The example shown is a very handsome one, with a carved frieze rail, and two carved rosettes at the top of each leg. The wood is mahogany. 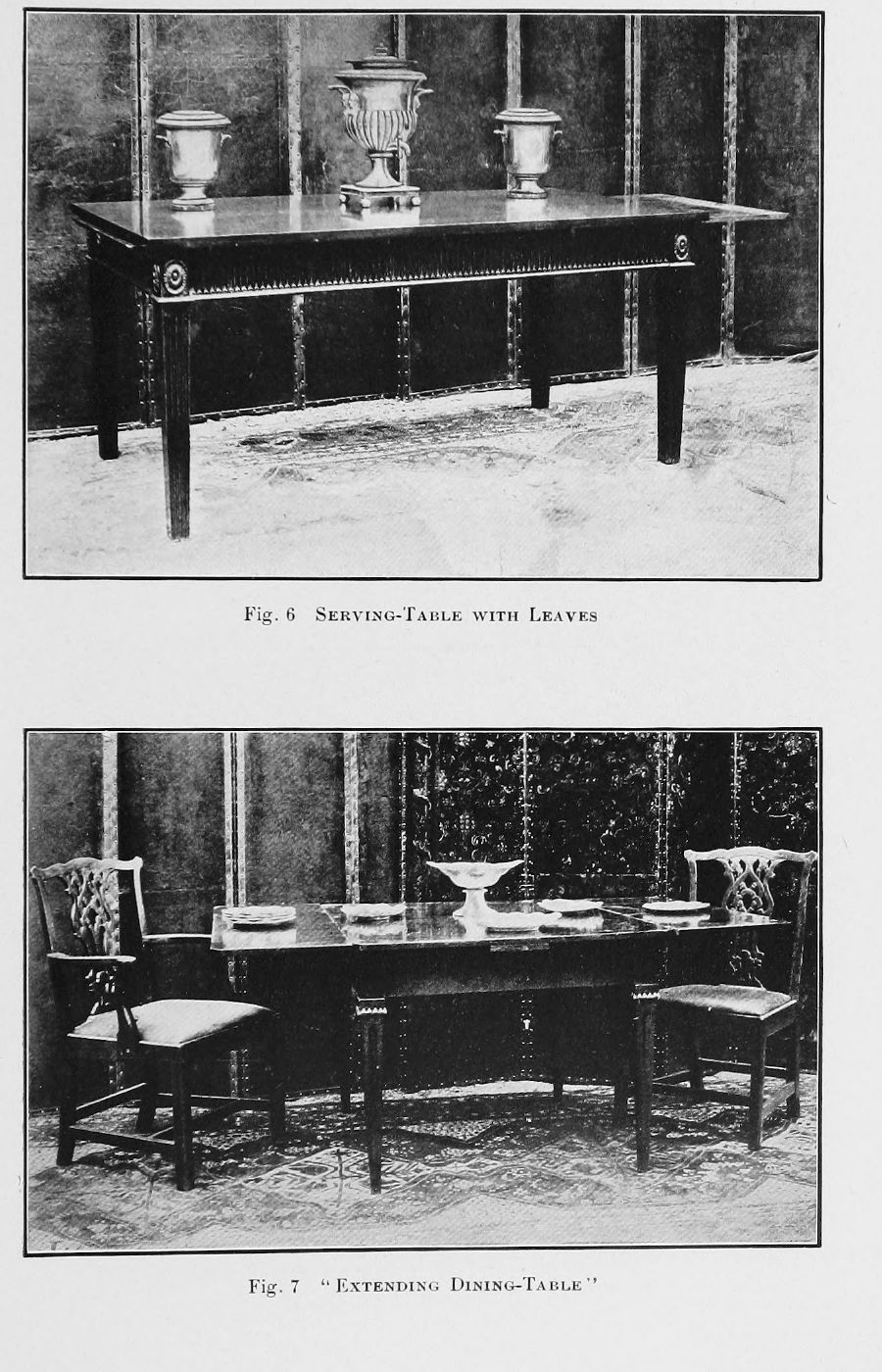 The dining-tables kept pace with the serving ones, and Figure 7 shows one of the same period as Figure 6 and which was called an " extending-table," though what we call an extension-table was not made till about 1800.

Chippendale made some very elegant tables, for side or sewing-tables, with marble tops or those of solid mahogany, and with richly carved frames, very few of wliich found their way over here. What there \Arere seem to have been gradually absorbed by museums, and there is one at Memorial Hall, Philadelphia, which have shown elsewhere, and once in a while you will find one belonging to some rich collector. I

In Figure 8 is shown such a sideboard table, one of mm a pair, twelve feet long, of richly carved mahogany. They came from the fine old English house, Luton Hoo, in Bedfordshire.

The first man to make what we know as sideboards was a cabinet-maker named Thomas Shearer, of London, England, who issued a book of designs in the year 1788. That they were immediately popular is shown by the fact that all the other cabinet-makers took to making them too, and in 1789 Hepplewhite published a book with his designs, and two years later came Sheraton with his.

Figure 9 shows a Hepplewhite sideboard, with the "spade" foot which was so characteristic of this maker. This board is solid mahogany, with a curved top, and though in England they commonly Areneered them on oak, those made in this country, and there are many of them, are veneered on pine, as we did not use so costly a wood as oak for that purpose. The curve under the drawers was to accommodate the AAane-cooler, and the usual ornament for the top of the sideboard was not a pair of candelabra, but a pair of knife-boxes, made of the same wood as the sideboard itself, and left open to display the wealth of knives inside, particularly if they had the fashionable handles of green ivory or silver. These knife-boxes, like the sideboards, were allways costly and elegant objects. Those of an urn shape were difficult to make and they were often in laid, which added to the cost. Inside was a frame filled with holes, which held the knives, and there were also in some of them places for spoons, which were put in with the bowls up. A pair belonging to General Washington are shown in Figure 10. And a set of knives and forks in Figure 11. 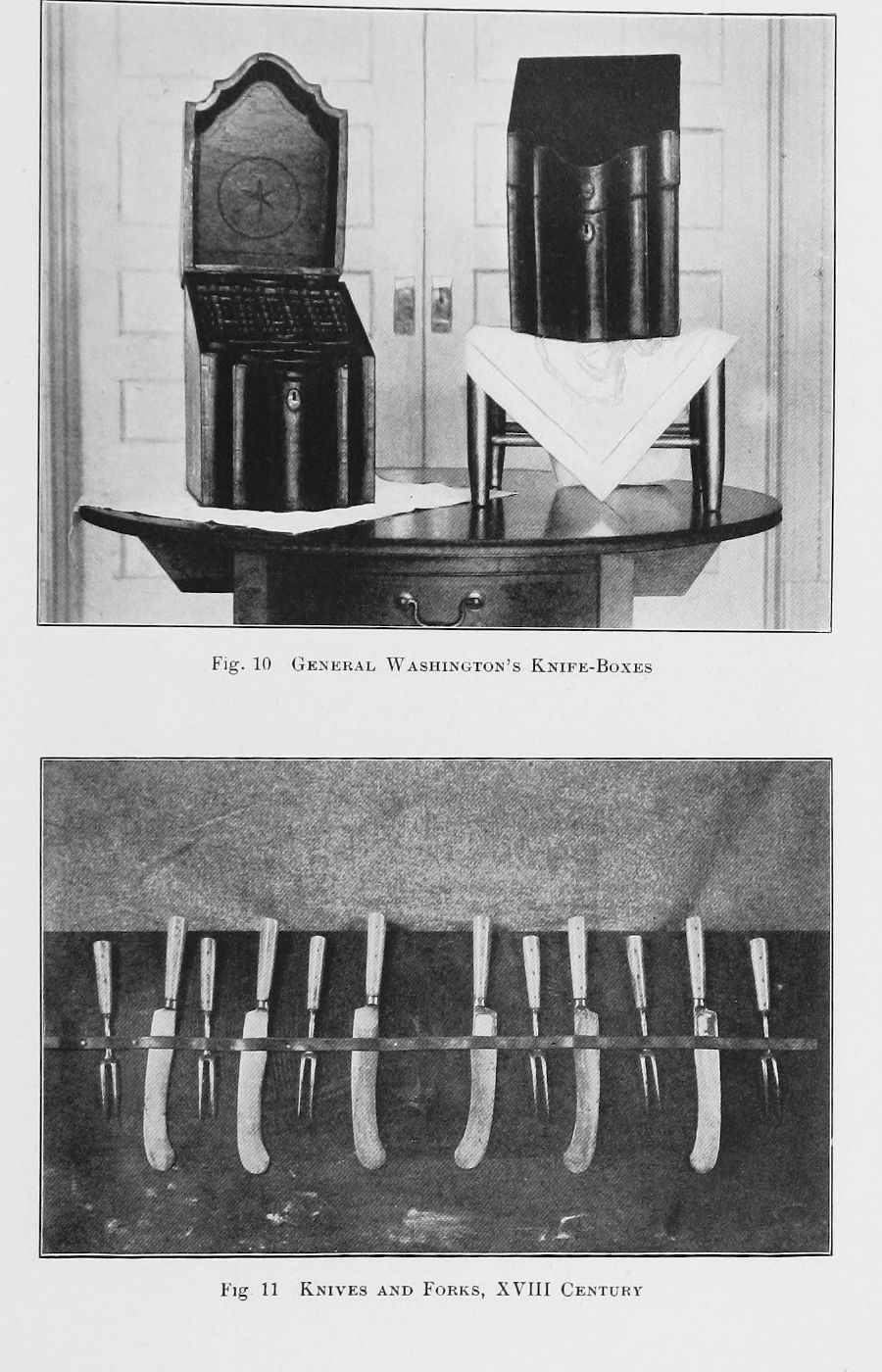