The History of Beds

Four-poster beds were in all probability introduced to this country soon after the Norman conquest, although they were by no means in general use, the majority of beds being probably formed by alcoves in the wall.

None of the early beds, however, have survived, and almost the only remains of the Gothic period consist of some few posts. Of the Elizabethan period some specimens are still in existence, and an example is given in Fig. 1. In this early form of bed the front posts were separated from the actual bed, and supported a canopy or tester of extraordinary weight. The posts were usually of bulbous form and contained the typical cup and cover detail which was generally carved with nullings and acanthus leaf work. They were of very heavy and ponderous construction, and decorated with a preponderance of carving; in some cases with inlay. The tester was, as a rule, panelled. 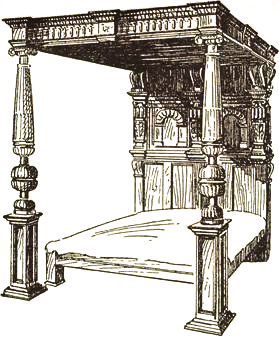 1. Oak Four-poster Bed. The posts are nulled and the lower turned portion is of the cup and cover type. Elizabethan Period.

Second half of 16th Century.

Contemporaneously with the four-poster was the trundle bed, a low structure probably used by the servant, and so made that it could be pushed out of sight when not required for use.

Another form of bedstead of a simpler type is shown in Fig. 2. This was probably made for the middle classes, and was similar in form to those in use at the present time, except that the foot consisted of two short upright posts joined by a rail. The bedding was generally supported by ropes interlaced through holes in the bed rails. 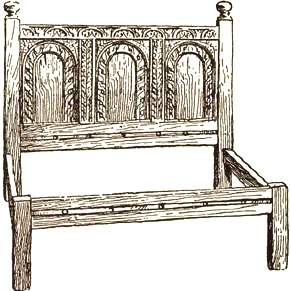 2. Oak Bedstead with arcaded head panels. The original foot is missing. but that shown is its probable form. Jacobean Period.

The four-poster continued in use throughout the 17th and 18th centuries, the Jacobean type being similar to the Elizabethan except that the posts of the former type were, as a rule, slighter and the carving more restrained. The bed proper was in some cases also joined to the front posts.

An example of a Queen Anne bed is given in Fig. 3, in which a great change is noticeable. Beds of this type were covered with hangings, the posts being often simply plain squares covered with material and draped round with hangings. The cornice was often of very elaborate shaping and section, and was stretched with cloth. The head was also decorated with a shaped board, moulded and stretched with material. This is seen in the example. The height of these beds varied tremendously, the general tendency being towards height. 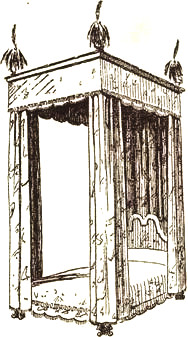 3. Four-poster Bed with hangings. The feet are scrolled and the canopy is surmounted by plumes of feathers. Queen Anne Period;

The idea of entirely covering the wood-work with material died out soon after the end of Queen Anne's reign, and many fine examples of 18th-century beds are in existence.

Fig. 4 is typical of the Chippendale period. 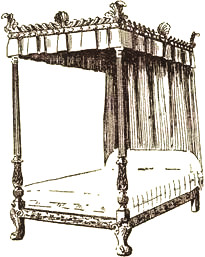 4. Mahogany Four-poster Bedstead. The posts are fluted for part of their height and rest upon cabriole legs. Chippendale Period.

About Middle of 18th Century.

Beds, however, were not exclusively of the four-poster type. The form illustrated in Fig. 2 was continued in the 18th century, the cabriole leg being generally used in the Queen Anne period, and having a projecting portion surmounting the front legs somewhat similar in design to an inverted cabriole leg minus the foot. The back was generally shaped with a series of round, hollow and ogee motifs of the usual Queen Anne character, the edge being moulded and the centre space either veneered or covered with material. Fig. 5 is a further example of an 18th century bed, and is of the Chinese-Chippendale style. The tester is in the form of a Chinese pagoda, the corner ribs of which are decorated with acanthus leafage. The bed is lacquered, a treatment which was still to a certain extent continued from the Queen Anne period. 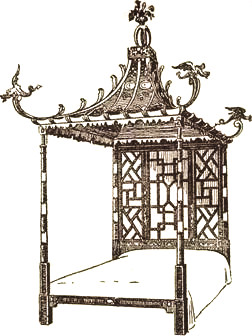 Towards the end of the century the beds were designed on a lighter scale, especially in the treatment of the posts and the tester. Fig. 6 is typical of the latter half of the 18th century. The shaped cornice moulding is decorated with the small pear-drop pendants usually associated with Hepplewhite. The back is covered with material. 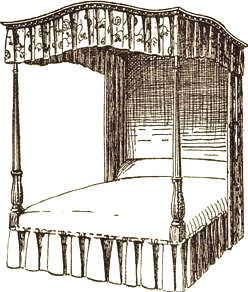 Second half of 18th Century.

English Furniture at a Glance by Charles H Hayward. London: The Architectural Press, 1924.