The History of Tables

The earliest form of table was known as a trestle table, and consisted of a roughly-hewn and heavy top supported by solid end pieces, these being generally cut to a crude Gothic shaping. They were held in position by rails tenoned through the trestle ends and secured by pegs, the whole being so arranged that by withdrawing the pegs the table could be taken to pieces and so cleared away when its space was required for other purposes.

An example of this type is shown in Fig. 1, which is typical of these early pieces. The piece is very massive, the only attempt at decoration being in the shaped trestle ends.

1. Trestle Table with shaped end supports to which the rails are secured with pegs. (Elm.) Tudor Gothic Period.

First half of 16th Century.

The next stage is shown in Fig. 2, in which the under portion is framed together. The legs are of the heavy bulbous type common at this time, turned in the cup and cover form, and carved with nullings and acanthus leaf-work. The frieze rail is inlaid with a small geometrical pattern and is finished at the lower edge with a carved moulding. 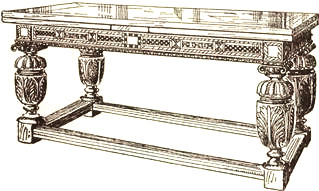 Second half of 16th Century.

This table illustrates a very interesting type evolved in the early 16th century, being made to extend. It is known as a draw-table, and the extending leaves, when the table is closed, are under the main top, as shown in the illustration, and when required are drawn out and supported by bearers, these being tapered so that when. extended they bring the leaves up to the height of the main top, which drops in place.

A plain Jacobean table is shown in Fig. 3, in which it will be noticed that the legs have lost their heavy bulbous shape, although the general structure is in many other respects very similar. Both the plain table shown in this example and the draw type were made in the 17th century.

3. Oak Table having turned legs and "S" strap and leaf carving in the frieze. Jacobean Period.

First half of 17th Century.

The draw-table in Fig. 4 is illustrative of a Charles II table, in which the bulbous leg has been revived, though with an altered contour. The table exhibits Dutch influence, a feeling which was the result of the return of Charles II from the Continent.

Second half of 17th Century.

A type of table made in considerable numbers during the 17th century was the gate leg, of which Fig. 5 is an example. They were usually made of oak, although towards the end of the century walnut was more frequently used. The majority of the walnut tables, however, were of rather different formation. 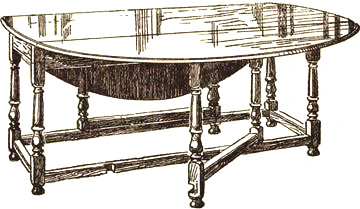 First half of 17th Century.

Fig. 6 is a walnut table decorated with marquetry, and is of interest as showing the development of the shaped flat lower stretcher in place of the plain straight rails. 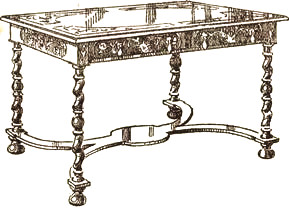 6. Walnut Side Table with flat stretcher. The top and drawer fronts are decorated with marquetry. William and Mary Period.

The Queen Anne period was noticeable for the number of card tables produced. They were usually veneered and had cabriole legs, the upper termination of which was often rounded as shown in Fig. 7. 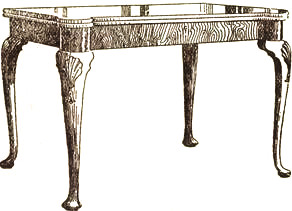 7. Walnut Card Table. The legs are of the cabriole type and are carved at the knee with shells. Queen Anne Period.

Early Georgian tables followed the Queen Anne models in their general appearance. Mahogany was by this time in considerable use, and the majority of examples were made of this wood. Fig. 8 illustrates a piece of about the year 1725, and instances a peculiar type of cabriole leg often identified with the period. 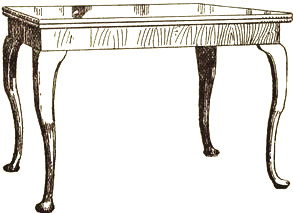 The example shown in Fig. 9 is of the period contemporary with Chippendale, and was probably made by one of the many craftsmen to whom the Chippendale influence had spread. The legs are five-sided and are moulded on the outer surfaces. The rear legs, as in the Queen Anne models, hinge backwards and so support the top which folds over from the front. Cabriole legs were considerably used and were often elaborately carved at the knee with acanthus leafage. 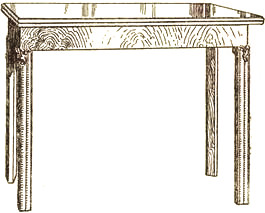 9. Mahogany Card Table with rails veneered with curl mahogany. The legs are carved with acanthus leaf scrolls at their juncture with the rails. Chippendale Period.

An Adam side table is shown in Fig. 10, and shows the classic and restrained feeling of his designs. 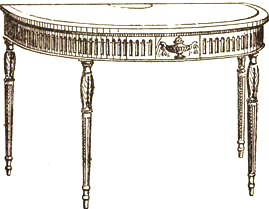 10. Pine Side Table, finished with gilding. The frieze rail is carved with flutes. The whole is in the Adam style.

Second half of 18th Century.

A further type of table developed towards the end of the century was one having a central support resting upon three or four shaped legs. Sheraton was responsible for many tables of this character, and they were often fitted with extending flaps, which hung down at the sides when not in use.

Semi-circular tables were also often made in pairs, and were so arranged that they could be placed together to form one large table. Many were also provided with a rectangular centre portion and spare leaves when an extra long extension was required.

English Furniture at a Glance by Charles H Hayward. London: The Architectural Press, 1924.